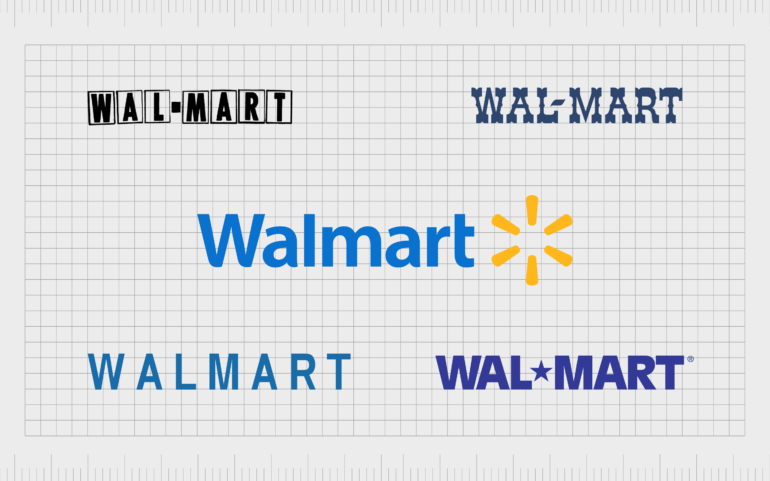 What does the Walmart symbol mean?

There are certain iconic brands throughout history no-one can forget. Nike, with its memorable swoosh is one example or Microsoft and its “Windows” logo.

In the retail industry, there are few names more recognizable than Walmart.

Walmart is currently worth around $328 billion, and it has branches all over the world. The Company is responsible for many additional sub-brands and organizations, such as Bare Necessities, and Moosejaw.

Over the years, Walmart has built a powerful reputation for itself as an affordable retailer, with something for everyone.

Today, the Walmart logo is one of the most memorable images in branding history. Simple but effective, the Walmart icon has become a symbol for value and community.

Let’s look at where Walmart’s logo came from.

Although Walmart is biggest in the USA, it has also branched out across the globe too. The Company originally began in 1962, with founder Sam Walton, and it became incorporated in 1969. Unlike other retailers, such as Target, Walmart’s logo has changed several times over the years.

The first design Sam Walton chose was basic, and many of the symbols following focused on simply displaying the name of the company, to make it more memorable.

Over the years, the Walmart branding team has even experimented with separating the “Wal” and “Mart” components of the name, placing either a hyphen or asterisk between the words.

You may have seen several versions of the Walmart typography in the history books, but the best-known version is a traditional, sans-serif typeface. Many font experts compare the Walmart type to LCT Picon Semi Bold, or Myriad Pro Bold.

Walmart has also used various colors since its initial inception, from black and white, to an earthy brown, and a darker shade of the better-known blue. Today, the softer blue combined with the Walmart Spark creates a friendlier image.

Walmart logos through the years

The original Walmart logo was as simple as they come. Between the years of 1962 and 1965, Walmart didn’t have a traditional logo or symbol. Instead, the Company just used the name “Walmart” written in a sans-serif blue font.

The original Walmart color and font style are similar to the one used today. Today’s option is a little friendlier, though, with lowercase text instead of capitals.

Between the years of 1964 and 1981, there were dozens of different Walmart logos to explore. Some of the first iterations used a new serif font with an almost Western style to it. The “Frontier font” appeared in Walmart’s logo on and off over the next 20 years.

Another significant change was the separation of the words “Wal” and “Mart”, with a hyphen.

Walmart also had an emblem-style logo throughout the years between 1962 and 1981. This version of the Walmart symbol came with a slogan: “We sell for less”. The badge also promised “Satisfaction Guaranteed” at the bottom.

Underneath the Wal-Mart name in the Frontier font, you’d also see the “Discount City” secondary name for the company. This was eventually removed.

Walmart also experimented with some slightly different versions of the Wal-Mart logo with the “Discount City” lettering. This typography often looked weathered to give it a rustic, distressed feel.

However, there was one Walmart logo design which involved placing each of the letters in boxes, creating a more modern design.

During the 1970s, Walmart logos focused heavily on the Frontier font again. The blue coloring made a comeback, perhaps because blue is a shade which often inspires more loyalty from customers.

When did Walmart change its logo?

As you’ll see throughout this article, the Walmart logo changed a lot.

Over the decades, this is a company which seems to constantly experiment with different styles and colors to capture more customers.

Some of the most significant design overhauls happened throughout the 80s, 90s, and 2000s.

Another Walmart logo design overhaul in 1981 pushed the Company to return to simpler letting. The all-caps font was back, although this time the type was a little bolder. The Walmart logo was brown, to maintain some of its rustic charm, instead of blue.

Interestingly, there was also very little space between the L of “Wal” and the M of “Mart”.

In 1992, Walmart changed the hyphen between the “Wal” and “Mart” part of the Walmart logo into a star. The logo is still present in some parts of North America today. The font remained mostly the same, it was now dark blue.

During 2008, Walmart had another major overhaul, completely changing its font again. All of the letters aside from the “W” were now lowercase, and the gap between the words disappeared entirely.

The heavy and angular typography was replaced with something softer, and more modern.

The dark blue became a lighter shade, creating a happier and more youthful feel. Although the star in the center of the name disappeared, a new “Spark” was introduced at the end. Similar to a sunshine symbol, the star appeared in gold.

There are occasions where Walmart uses only the spark for its logo today, such as in mobile apps and on websites. It’s common to see the Walmart name alongside the spark on brand signage.

What does the Walmart symbol mean?

Most of Walmart’s logos throughout history have been heavily focused on the Company’s name. It’s easy to argue the name is the most memorable part of Walmart. However, since the Walmart spark appeared in the early 2000s, this image has started to gain its own fame.

Today’s fans of the Walmart symbol believe the spark is a great representation of what the Company stands for. Far apart from the more rustic All-American vibes of the older Walmart identity, the new symbol is friendly and modern.

The change to something softer was necessary for Walmart in the early turn of the millennium, because the Company knew it needed to rebrand.

People weren’t looking for heritage all-American companies anymore. The consumer base Walmart wanted to capture was searching for something new.

Walmart’s old image was also a little tainted at the time, with many people associating the brand with cheaper products or low-class items. Switching logos and designing a new Walmart symbol was a prominent part of the company’s strategy to refresh its image.

According to experts from the Walmart branding team, the spark is a symbol for innovation and inspiration.

More than just a sunny icon which creates a sense of happiness, the Walmart spark speaks to some of the values Walmart has held close over the decades.

Today’s Walmart logo is a memorable and easy to recognize symbol of the brand.

The soft and friendly blue coloringis a great choice for a retailer hoping to be seen as trustworthy and respectable. The lowercase lettering of the typography (replacing the bold all-capital fonts of before), is much easier on the eyes too.

Overall, the font choice comes across as more playful and informal – similar to many leading brands today.

The yellow sunburst, known as the spark, adds something special to the Walmart identity it didn’t have before. After years of relying on words and slogans to show its value, Walmart finally changed to the power of an image in the 2000s.

Walmart wanted to create something friendlier and warmer with the logo it has today.

The spark, which conveys feelings of sunshine, warmth, and innovation all at once, creates a great atmosphere for the company. Through the careful combination of a new wordmark and icon, Walmart has ensured its logo can stand the test of time.

Fabrik: A branding agencyfor our times.

Now read these:
—Behind the wheel of the Jeep symbol
—The history of the Chevrolet emblem
—Harley Davidson logo emblem evolution
—Exploring the UPS shield and logo
—The Nike logo history and evolution
—What does the Target logo symbolize?
—Taco Bell logo history and meaning