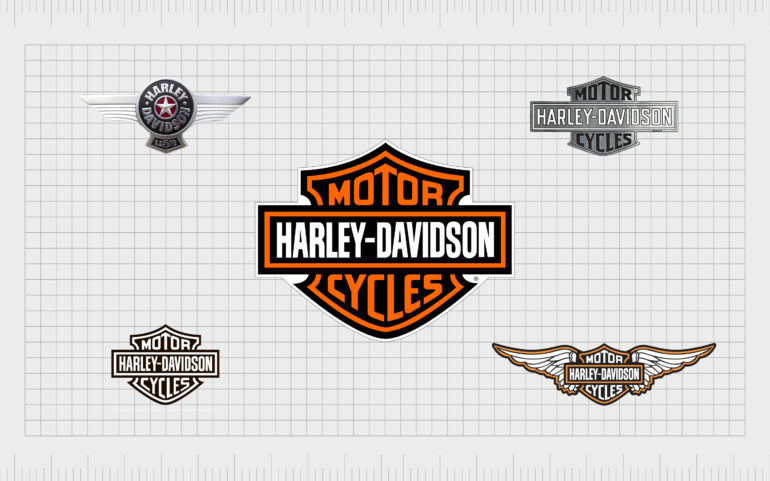 The road so far for the Harley Davidsons logo.

The Harley Davidson emblem is one of the most recognizable symbols in the world. Whether you’re a motorcycle enthusiast, or not, you probably know what Harley Davidson logos look like. That’s a testament to how iconic the image has become.

More than just a motorbike merchant, Harley Davidson is the brand name behind an incredible community. Over the years, the Company’s image and products may have changed, but the dedication to deliver excellent road-based experiences remains the same.

Founded by William Sylvester Harley, Walter Davidson, Arthur Davidson, and William Davidson, Harley Davidson has been around since 1903.

Despite several unsuccessful experiments with motorbiking technology, the Harley Davidson team remained consistently focused on their goal: to create the best bike in the world.

The Harley Davidson emblem, and the name of the company emblazoned within it, have been core components of the company’s brand recognition since day one. The original version of the logo didn’t actually appear until 1909, a few years after the company started.

The first Harley Davidson logo was apparently created by Janet Davidson. The design wasn’t the first emblem created by Janet, who was already accustomed to creating monograms in the textile industry.

However, despite the changes, the Harley Davidson bar and shield remain a common component of the Company’s image. Let’s see how the design has changed over the years.

To motorcycle enthusiasts, the Harley Davidson emblem isn’t just a logo – it’s a badge of honour.

For decades, the Company has built a reputation as a symbol of freedom and unity. The Company’s brand identity is so compelling many people wear Harley Davidson’s logo on jackets, shirts, and more, even when they don’t own a bike.

The first Harley Davidson logo was the beginning of the brands’s long-standing bar and shield combination. This emblem was surprisingly simple compared to some old-fashioned logos, with a basic metallic shield and a block bar which looked similar to a license plate.

The original Harley Davidson logo was simple out of necessity. There were only so many tools available for creating vehicle badges back then. If the Harley Davidson motorcycle logo was too complicated, it wouldn’t have been feasible to create.

The old Harley Davidson logo stayed in place for a number of years, until 1934, when a new winged version of the logo appeared. This alternative emblem missed the shield and bar image most customers are familiar with today, and embraced a more common “retro-style” vehicle badge:

In 1953, Harley celebrated their 50-year anniversary, and created an elaborate new emblem to commemorate this. For collectors, this vintage Harley Davidson logo is highly sought-after today.

The design featured the standard Harley Davidson bar and shield, combined with a large V in the background, to indicate 50 years of business.

The most popular and well-known Harley Davidson logo emerged in 1965. This was very similar to the logo we know today, with the same shield and bar design, and a modern form.

Since 1965, this logo has remained the standard for Harley Davidson. However, it’s worth noting each Harley Davidson dealership can also have its own logo. This means the emblem you see will often depend on where you buy your bike.

The Harley Davidson emblem also had another anniversary-style logo created on the Company’s 100th year in business. This version of the logo included the bar and shield commonly known among fans today.

However, the emblem also includes the years the manufacturer had been in operation at the time, and a large 100 to mark the occasion, surrounded by a set of wings.

Harley Davidson even had a logo for its 105th anniversary, though this is a little lesser known than the 100th and 50th anniversary options. Again, the emblem includes the classic Harley Davidson bar and shield logo, with the dates 1903 and 2008 printed on it.

A set of wings pulls the mind back to older Harley designs, while the “105 years” mark demonstrates the brand’s heritage.

With the release of the 105th anniversary logo, Harley also offered custom styling for the Rocker, Rocker C, and Dyna Fat Bob bikes.

For most of its 100-year history, Harley Davidson logos have remained largely the same, with a consistent commitment to the bar and shield format. However, unlike other brands, Harley is also one of the few companies that can be quite flexible with its emblem.

As mentioned above, each dealership can have its own version of the logo, with different wings and embellishments around the central design.

There are a few things which remain consistent about the Harley Davidson logos no matter where you go.

Although the shield has appeared in various different shapes and sizes, the inscription has always remained the same: Harley Davidson Motorcycles.

There have been various versions of the Harley Davidson color scheme over the years, including black and white options, as well as metallic designs (chrome). The current black and orange theme seems like a perfect fit for the brand, combining fun with strength and power.

Most Harley Davidson dealers maintain the combination of black, white, and orange to give the logo an amazing finish.

Harley Davidson has played around with some different scripts and typefaces over the year when redesigning its logo. However, the majority of the designs feature stylish, and very strong sans-serif fonts.

The Harley Davidson font you know today has been around for more than 50 years, and it’s a perfect choice for the motorcycle manufacturer.

If you want to see the Harley Davidson logo, or its elements in all of their glory, you can check out some branding resources here.

Harley Davidson logos are some of the most impressive emblems in the world. Although different dealerships can use different versions of the emblem, the Harley image still remains recognizable wherever you go.

Here are some facts you might want to know about Harley Davidson logos:

Harley Davidson logos are rich in symbolism. The iconic bar and shield are intended to demonstrate strength and durability. The wings which often appear in celebratory logos and in various dealerships come from an Eagle, the bird of the USA. Clearly, Harley Davidson is an all-American legend.

The Harley Davidson Owners Community, or HOG, is the largest motorcycling community in the world. It uses a logo of its own, which is quite different to the official logo of Harley Davidson. You can buy the HOG logo on all kinds of jackets and commemorative clothing items.

Although every official representative of the Harley Davidson brand is free to alter the logo as they see fit, most don’t. 95% of dealers believe retaining the well-known global logo is the best way to demonstrate their love of the brand.

Harley Davidson is a big fan of releasing special versions of its logos during important moments in history, such as a 50th of 100th anniversary. These logos are only temporary and are often offered as part-time promotion.

When the celebratory logo is available, it’s often printed on shirts, and on the bikes themselves.

Harley Davidson is one of the few automobile companies with a logo people actually want to wear. Many jackets and t-shirts are available with the logo present on them.

If you’re a fan of the idea of Harley Davidson, and its amazing community, you can show your appreciation without ever buying a bike.

To learn more about some of the world’s most famous logos, make sure you check out our guides to the biggest emblems in the world.

Now read these:
—Behind the wheel of the Jeep symbol
—The history of the Chevrolet emblem
—Explaining the Van Halen symbol
—The story of the Rolling Stones logo
—Exploring the Stranger Things logo
—The Gucci symbol and logo history
—Story of the Pokémon logo symbol