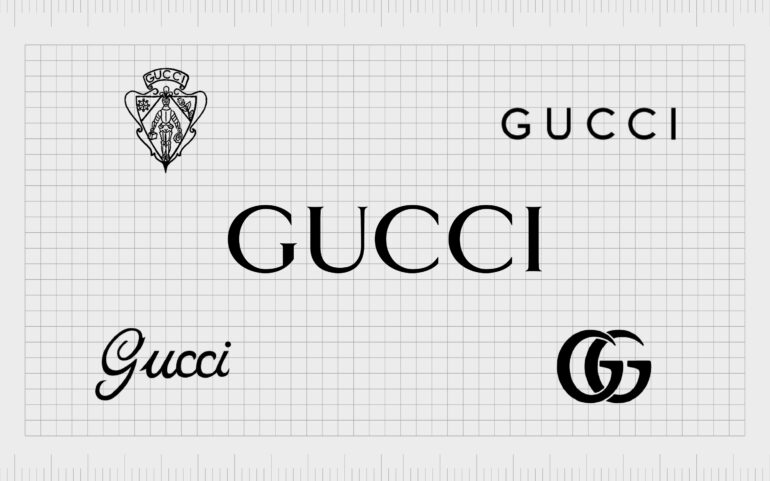 A fashion icon: The Gucci symbol and Gucci logo history

Gucci logos through the years.

How much do you know about Gucci logo history? The Gucci symbol is an extremely sought-after icon in the fashion world. Just a glimpse of this emblem stamped onto a purse or pair of sunglasses can leave an onlooker with serious envy.

So, how can a simple logo inspire so much desire?

Gucci is among the better-known high fashion brands in the world. For over 100 years, the Company has built a name around its dedication to glamorous, high-quality products.

Gucci gives the world a taste of Italian fashion and seals each design with its stamp of approval: the Gucci symbol.

Today, we’re going to take a trip into Gucci logo history, to explore the meaning behind the icon, how it’s changed over the years, and what it stands for today.

An introduction to the Gucci symbol

Guccio Gucci opened a workshop in Italy during 1922 to produce luxury suitcases and saddles. The brand name for the company was Guccio Gucci, with a logo written in italics to mimic the signature of the founder.

Today, the logo is very different, and much simpler, to allow for easier integration into some of the products the company sells.

The official Gucci logo hasn’t changed much since the 1930s, when one of Gucci’s sons recreated his father’s mark. Aldo Gucci designed the interlaced double G logo, representing his father’s initials.

According to Aldo, it also represented the links of a bracelet, demonstrating luxury.

To avoid confusion, the initial logo often included the name of the brand situated above the emblem. Today, it’s more common to see either the wordmark or the Gucci symbol standing alone.

The logotype, when used is an all-black wordmark in capital, serif letters, intended to convey authority, heritage, and sophistication.

Aldo Gucci brought life to the iconic Gucci symbol. The old Gucci logo has followed the Company ever since. It’s very rare to find any other versions of the Gucci emblem. However, there are some vintage Gucci logo products out there if you’re willing to pay a premium.

For instance, when Guccio Gucci passed away in the 1950s, Aldo took over the store. Aldo chose to replace the logo on the label for a short time, using a picture of a knight standing within a shield.

The knight held a set of suitcases, similar to a lesser-known version of the icon with a bellboy in the 1930s. The complex logo included a Gucci wordmark on a banner, a rose, and a rudder, to symbolize aesthetics.

During this time, Gucci was also using the double G logo as a registered trademark, printed on luggage, small leather goods, and bags. The print followed the Company as it grew, appearing in new stores and partnerships, until the knight design was forgotten about.

Among fashion brands, Gucci is one of the few to continue using the same symbol for such a long time. Products stamped with the same Gucci symbol born decades ago are just as sought after today.

There are even countless imitations of the Gucci emblem out there from people desperate to recreate, and profit from some of the magic.

Crucially, though Gucci logos through the years remained largely the same, the rights to the Gucci emblem were a source of controversy in 2012. Thanks to issues with intellectual property law in the UK, Gucci’s sign ran out of trademark in 2012, and the brand didn’t renew it on time.

Though the Company went to the courts to fight back against the decision to remove the trademark, they ultimately lost their case. Today, Gucci still doesn’t have a logo trademark in the UK.

Fortunately, this hasn’t had a huge impact on the Company’s ability to maintain a strong image worldwide.

What is the meaning behind the Gucci logo?

The old Gucci logo, and the symbol we know today, is simple enough. According to Also Gucci, this logo was intended to be a representation of Guccio Gucci’s name. The Gucci sign was much easier to display on all kinds of products than the original wordmark.

The shape of the logo also mimics the links of a bracelet, which gives some strength to the company’s position as a luxury brand.

Gucci’s double G logo has been re-proposed in a variety of different forms and versions. Gucci even experimented with a handwriting style wordmark recently. However, it’s hard to see the official Gucci emblem being replaced by anything going forward.

The iconic symbol is one of the most recognizable emblems in the world, and it now appears on countless fashion products produced by the brand. The Gucci logo acts as a seal of approval for what many consider to be the most fashionable clothing and accessories in the world.

When people with endless amounts of cash spend a fortune on Gucci, you know the logo has appeal.

The Gucci logo colors and fonts

The official Gucci symbol is the iconic double G created by Also Gucci. The sans-serif typeface combined with the unique link-like design makes this emblem impossible to forget.

The chic, elegant Gucci brand logo, written in capital letters and placed above the emblem, is written in a sophisticated, high-class serif font, similar to Granjon Roman typefaces, and Questal SC medium.

These are serif fonts with very sharp serifs and thin lines. The monogram, on the other hand, uses bold, clean letters in a sans serif typeface.

Many people probably wouldn’t be able to name the official Gucci logo colors today. The emblem has appeared mostly in black and white through the years, with some golden versions too. The Gucci color scheme, however, actually features dark green and red stripes.

The colors were chosen to represent beauty and class, and they appeared on a huge selection of vintage Gucci products.

For many lovers of Gucci, the red and green color palette is just as iconic as the emblem itself.

To learn more about the Gucci logo in all of its glory, you can find Gucci symbol resources here.

Notably, Gucci did announce an updated word type version of its logo in 2020, although many believe that this symbol was only created for a specific collection. The new design replaces the previous serif font of the Gucci name with a scribble that looks similar to a child’s handwriting.

The response to this design has been overwhelmingly negative. It remains to be seen whether the Company will continue to use it going forward.

Celebrating Gucci logos through the years

The history of the Gucci logo dates back through the decades, demonstrating a constant commitment to fashion and beauty. Over the years, while Gucci has produced endless stunning collections and new products, they’ve never lost sight of their iconic emblem.

Traditional and sophisticated, the Gucci logotype and accompanying symbol are a mark of quality and luxury which have survived more than a century.

Every time the Company has considered changing its logo significantly, new designs have failed to take off. People love the reassuring heritage and history of the traditional Gucci logo.

Don’t forget to check out our other amazing logo guides for further insights into some of the most memorable logos in the world.

Draplin Design Co.: Pretty Much Everything
$21.10
Buy on Amazon
Sale