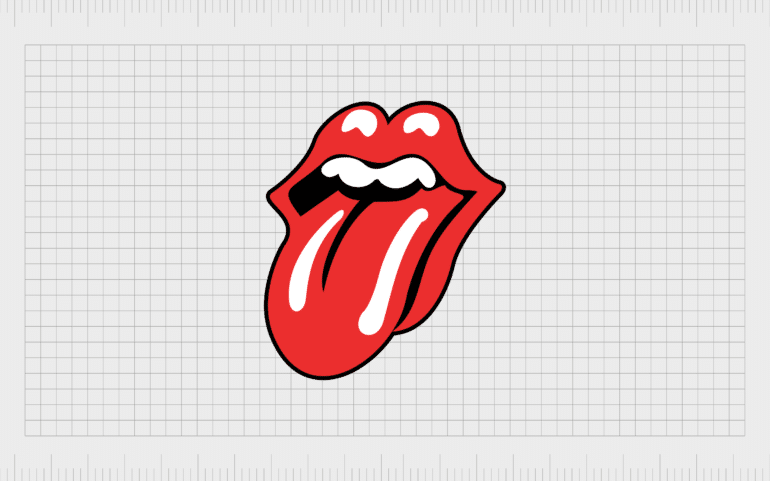 The story behind the Rolling Stones logo

Introducing the lips and tongue logo.

The Rolling Stones’ logo is one of the most iconic symbols of rock and roll in the world. Known across the globe, this emblem isn’t just meaningful to music fans.

Over the years, it’s also become a powerful fashion symbol, with many people purchasing apparel featuring the Rolling Stones’ logo without any knowledge of the band it represents.

Otherwise known as the lips and tongue logo, the Rolling stones mouth logo is wonderfully eye-catching, and deeply meaningful. Designed for a meagre £50, the Rolling Stones emblem is evidence sometimes the best ideas can come from unexpected places.

Today, we’re going to take a closer look at the story behind the Rolling Stones logo.

The Rolling Stones’ tongue logo stands out today as the symbol of wild party animals and rock and roll enthusiasts alike. Like many other famous logos, this design has taken on a life of its own. Today, it appears all over the world, emblazoned on everything from shirts to cars.

The original Rolling Stones lips, designed by John Pasche, was inspired by Mick Jagger’s desire to convey a tribute to the Hindu goddess, Kali. Kali was the goddess of empowerment and energy. The Rolling stones logo meaning therefore goes a lot deeper than many people realize.

The black and red icon is an excellent representation of not just energy, but risqué rock lifestyles, and guitar riffs.

In 2018, a poll also identified the logo as the most “classic” t-shirt design in the UK.

The Rolling Stones logo began with John Pasche, a student from the Royal College of Art. A call came to the college, asking an artist to create a poster for the Stones’ tour. Jagger had already seen some of Pasche’s designs and decided to give him the gig.

Thrilled with Pasche’s artistic prowess, Jagger hired him to design an emblem for the official Rolling Stones Records company. Jagger had already been inspired by a newspaper cutting he’d seen about Kali, the Hindu goddess, with her sharp tongue and vibrant red lips.

The resulting lips and tongue logo created by Pasche first appeared on the 1971 album, Sticky Fingers, and it’s remained an icon of the Rolling Stones ever since.

Unlike other popular logos throughout history, the Rolling Stones’ emblem is one of the few that has remained the same over the years.

Part of this could have something to do with the deeper meaning of the logo. A representation of a Hindu goddess is an inspiring thing to have as a brand icon.

Though some people believe the lips and tongue logo were intended to represent Jagger’s mouth, the design was actually focused on the characteristic features of the goddess Kali, which included an impressive mouth, and a pointed tongue sticking out.

Unsurprisingly, however, Pasche has said the idea to focus on the mouth was largely inspired by Jagger’s lips, which are his most prominent feature.

Sometimes referred to as the “Hot Lips” symbol, the Rolling Stones’ emblem has remained timeless through the years. According to Pasche, this could be because the icon isn’t just an image – it’s a universal statement. Rock and Roll is often associated with rebellion and taking a stand.

The act of sticking out your tongue is universally anti-authority.

Various generations have seen the opportunity to be bold and rude in this logo, wearing it as an icon of their own rebellion, regardless of their feelings about the Rolling Stones. The lips and tongue logo gives users a sense of power, and it helps to spread awareness about the band at the same time.

Both Jagger and Pasche also appreciated the sexual nature of the design. The Rolling Stones tongue isn’t just about anti-authoritarianism, it’s also an emblem of the “sex, drugs, and rock and roll” lifestyle.

The features of the Rolling Stones logo

It’s amazing to think John Pasche only received around £50 when first designing the Rolling Stones lips. Although, when the Stones saw the image, they were apparently so thrilled they gave Pasche another £200.

John also had the opportunity to work with the band for several years.

The initial Rolling Stones logo, created by a student, allowed Pasche to earn a reputation as one of the leaders in Rock and Roll design. John found a lot of customers for his initial work, including Judas Priest, The Who, Jimi Hendrix, and many others.

Pasche also eventually sold the original draft artwork for the logo to the London Museum for around $92,500.

The lips and tongue logo of the Rolling Stones is impossible to ignore. This wonderful image represents not just the goddess Kali from the Hindu religion, but the sexuality of Rock and Roll, and its anti-authority stance.

The shape has remained the same over the years and sets itself apart from other rock symbols as one of the most recognizable images in the musical world.

The color of the Rolling Stones’ logo is one of the few things designers have taken liberties with over the world. You can find this symbol in almost every shade today.

However, the official Rolling Stones’ logo will always be a combination of hot chili-pepper red, white, and black. The red mouth embodies passion, excitement, and energy.

The Rolling Stones emblem centers around the “hot lips” design. There’s no specific font associated with this logo design. However, many designers creating bags, ties, and other apparel with this icon have added their own font choices over the years.

What is the Rolling Stones tongue called?

If you’re still curious about the Rolling Stones symbol, here are a few answers to your possible questions…

What does the tongue symbol mean?

As mentioned above, the Rolling Stones tongue is a homage to the goddess Kali from Hindu religion. The goddess of energy and empowerment is also a symbol of femininity.

Many people also see Mick Jagger’s iconic mouth in this image, making it easy to associate with the Rolling Stones. The tongue can also be a sexual symbol, or an icon of anti-authoritarianism.

Who created the Rolling Stones tongue?

The Rolling Stones logo was created in 1971 by John Pasche, to symbolize the anti-establishment message of the group, and Jagger’s desire to honor the Goddess Kali.

How did the Rolling Stones get their logo?

Early in the 70s, the Rolling Stones’ team reached out to the College of Art in London, where John Pasche was currently a student. The band wanted someone to create a poster for their new tour around Europe.

After seeing John’s work, the Stones’ also asked Pasche to create their logo.

Is the Rolling Stones’ logo a fashion symbol?

The logo for the Rolling Stones is more than just an emblem of rock and roll today. Many people wear this logo as a sign of their own anti-establishment views. The logo is popular around the world, particularly among younger generations.

The Stones have accumulated massive fame and wealth over the years, and their logo has almost taken on a life of its own. Today, this incredible icon isn’t just a symbol of one of the world’s famous brands, it’s a universal icon of freedom, courage, and empowerment.