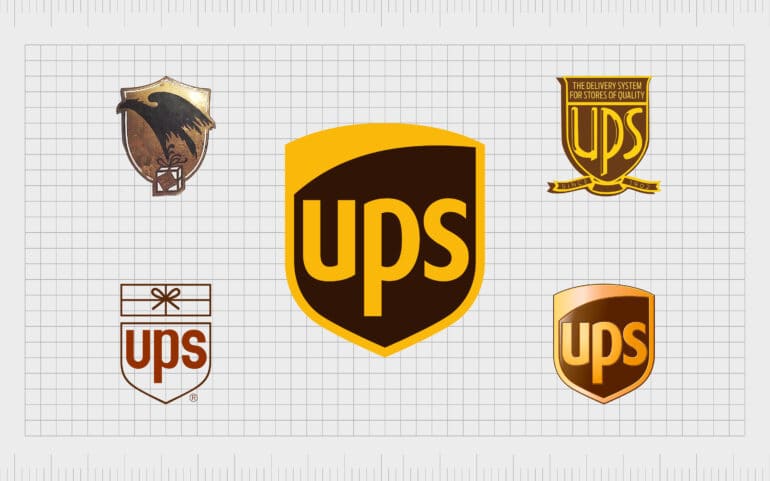 Everything you need to know about the UPS branding package.

UPS logo history is a popular topic of conversation in the branding world. Just like other leading brands, from Microsoft to Amazon, UPS has evolved its visual presence over the years.

After all, as the marketplace changes, and the preferences of customers evolve with it, all companies need to ensure they’re maintaining the right image.

UPS is currently one of the biggest companies in the world.

This global logistics company has become synonymous with shipping and delivery, particularly in the United States. Part of what helped UPS to become so successful, is a memorable brand identity that conveys strength, reliability, and security.

Here’s everything you need to know about the UPS logo history.

Who designed the UPS logo and UPS slogan?

The United Parcel Service logo is one of the best-known brand marks in the world for a good reason. Despite a variety of changes over the years, and the introduction of a new UPS slogan, the Company has maintained quite a consistent image from day one.

The first UPS logo came from James Casey in 1916.

James was the founder of UPS, and its first branding team. He decided the logistics company should have a logo which demonstrated speed, efficiency, and performance. The result was a picture of an eagle carrying a package atop a bronze shield.

The old UPS shield logo was accompanied by the first UPS slogan: Swift, safe, and sure. Though the old UPS logo was eye catching and memorable, it was also quite complex.

In 1937, the decision was made to update the logo for the first time, removing the eagle, and adding a new logo.

The new UPS slogan became “The delivery system for stores of quality”, and featured the “Since 1907” mark, to give the image a sense of heritage.

Some components of the UPS logo have stayed the same over the years. The United Parcel Service logo appears to be constantly linked to a golden UPS shield. This icon is an important part of conveying the safety and security of the logistics processes.

Over the years, however, UPS has experimented with different designs.

Between 1916 and 1937, the brown eagle with a tied package in its talons flew over a bronze shield with a gold border. There was no sign of the UPS name, but “Safe, Swift, Sure” acted as a memorable brand slogan.

In 1937, the second version of the old UPS logo emerged, now featuring the name of the brand, and a lot more content. The new slogan and the reference to the “Since 1907” mark made the logo a little more complex and cluttered. Though the shield remained, there was no room for the eagle.

In 1961, UPS decided to simplify its logo even further. The UPS shield remained, now with no coloring at all. The emblem appeared most often in black and white, with large lower-case black font showcasing the name of the company.

The shield itself seemed to split into two parts, with the bottom holding the company name, and the top appearing like a tied package.

It wasn’t until 2003, more than 40 years later, UPS decided to update its logo again. The new UPS logo, which remains in use today, returned to its golden and brown color palette.

The UPS rebranding strategy removed the string-tied package above the main part of the shield. The shield itself also received a curved top, making it a little more eye-catching and 3D.

Another slogan re-emerged in 2003, though it’s not always present in marketing materials today. Thanks to the dark chocolate color and intense yellow of the logo, the UPS slogan became “What can brown do for you?”.

Elements of the UPS emblem: color, font and more

The UPS logo is a powerful emblem, conveying trust and reliability.

Although parts of the logo have changed over the years, the UPS shield remains a consistent part of the image. Originally, the shield was a lot sharper, and narrower, representing a shield similar to what you might see on a coat of arms. As the logo updated, the shield changed too.

Let’s take a closer look at some UPS emblem features:

The shape became simpler over the years, the design team removed the upper notches from the first iteration for the second logo, then turned to a black and white dual-part shield in the third edition. The 2013 logo changed the shield again, giving it a more curved line towards the top.

With the exception of the variant in 1961, the colors of the logo have been gold and brown for the life of the business. The original brown also had some bronze to it. Modifications to the logos over the years increased the focus on the deep brown and its contrast with a bright golden yellow.

Lower-case sans-serif fonts have become increasingly popular in recent years. This font style has always been the choice for UPS symbols. The font is very basic and expressive, with soft curves and a friendly overall appeal.

The gold lettering in today’s UPS logo is intended to represent the company’s long heritage and reliability. The font was manually created by Paul Rand, a famous type creator.

If you’re keen to see all the elements of the UPS logo up-close, you can find UPS brand resources and vectors here.

Facts about the UPS logos

Although there have been several instances of UPS rebranding over the years, the Company has largely remained true to its original image and colors. Since day one, UPS has had a strong vision of the values that should drive the company, and this shows in its logo choices.

As mentioned above, one of the things making the UPS slogan so appealing is its unique font, which is called UPS Sans. The font is slightly modified from the FF Dax font and, as mentioned, was created by the prolific Paul Rand.

Another iconic component of the UPS logo, is it has a specific shade of brown, known as UPS brown. This is the color UPS uses on professional uniforms too.

However, when the Company first started operating in Germany, the brand decided to change the uniforms to a light brown and white pinstripe instead.

Even UPS trucks are brown today, although this wasn’t the initial request of the business owner. The founder of the brand, Jim Casey wanted the trucks to be painted in red, then yellow.

His team convinced him the trucks would be far too flashy in those colors and suggested a more elegant deep brown instead.

What does the UPS shield mean?

For years, UPS has worked hard to convey meaning and depth in its logos. You can see this not just in the changing UPS slogan, but in the symbols and colors chosen by the Company.

As its key symbol, UPS decided on the shield. Standing for reliability and strength, this is a positive choice for a logistics brand.

The palette of gold and brown delivers an additional sense of stability to the UPS emblem. The fact the two shades aren’t as common in logo design also ensure the UPS shield can stand out.

Today, the UPS logo is one of the most recognizable emblems in the world. Though its long-running history started more than 100 years ago, UPS remains a well-known brand to this day.

The Company has also helped designers everywhere to understand what a timeless, long-standing logo might look like.

Although UPS logos have changed over the years, many of the aspects remained the same. Additionally, UPS is one of the few brands to have had several years between many of its rebranding efforts.

If you’d like to learn more about the history of some iconic logos, check out our additional guides to world-leading emblems.