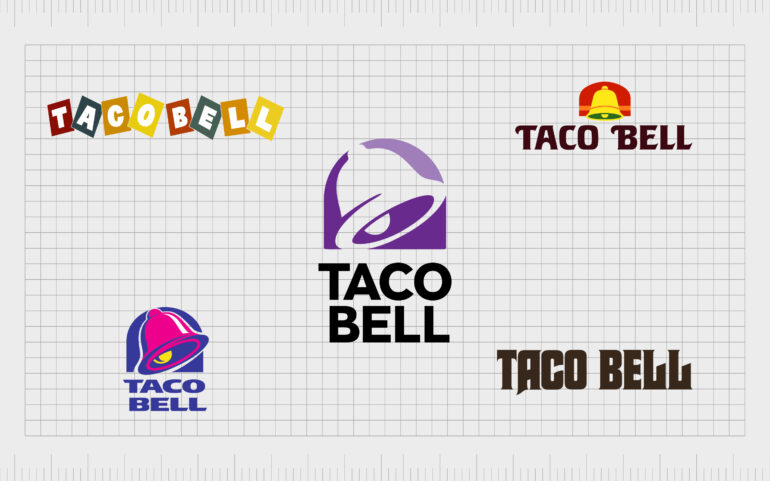 The Taco Bell logo evolution through the years.

If you want to know more about the Taco Bell logo history, this article is for you. We’re going to unearth everything you need to know, from the old Taco Bell logo to the new Taco Bell logo and every evolution in between. So, let’s get started…

Taco Bell is a name known across the globe today. Even if you’ve only glimpsed the brand once or twice, you probably have a good idea of what the logo looks like. It’s the mark of an iconic brand image.

Just like the Jeep logo, or the emblem for the Rolling Stones, the Taco Bell logo has emerged as a powerful identifier for an increasingly global business.

Of course, just because the Taco bell logo is popular, doesn’t mean everyone knows where it came from. If you’re unsure about the history of Taco Bell and its logo, or you’d like to see some of the old Taco Bell logos through the years, you’re in the right place.

Here’s your guide to the Taco Bell emblem…

The history of Taco bell: A brief overview

Let’s start with a brief insight into the Taco Bell Company.

Taco Bell was created by Glen Bell, an entrepreneur and innovator responsible for a hot dog and hamburger stand in California, Bell’s Drive-In.

In 1948, Taco Bell didn’t exist, but Glen Bell had an idea for a fast-food restaurant offering something a little different to the McDonalds and Burger Kings of the world.

Living in a Mexican neighborhood, he saw how much people loved the traditional Mexican Taco, and decided it was time to make the food more accessible to everyone.

To begin his new adventure, Glen approached the owner of a Mexican restaurant called Mitla Café. He asked about the recipe, and started to explore flavors of his own, creating a crunchy version of the traditional Taco capable of mass production.

Bell even claimed he was responsible for inventing the hard-shell taco during the 1950s, but research reveals a patent already existed in 1940s for a similar design. Over the years, the name of the brand changed, from Taco-Tai to El-Taco, and finally Taco Bell, in 1962.

The history of the Taco Bell logo

The Taco Bell logo, like the name, first appeared in 1962. Initially, the emblem was a simple word mark, with no trademark bell whatsoever. Rather than using a unique image, Glen decided to focus on the memorable name of the restaurant, written in funky all-capital fonts.

Over time, the original Taco Bell logo evolved, and the iconic bell became a much more central part of the Company’s image. The shape of the bell was adopted in 1985 and has remained a part of all Taco Bell logos ever since.

For the first ten years, the old Taco Bell logo was a simple, but fun wordmark, written in capital letters. The name of the brand, portrayed in a sans serif font, aimed to make the company look more welcoming and playful.

The bright colors of blue/green, orange, red and yellow captured the attention of potential diners, while simultaneously reflecting the energy and passion of the food chain.

Some experts say the choice of colors also aimed to convey the selection of simple ingredients available to offer customers, from golden cheese to crunchy taco shells.

In 1972, the Taco Bell logo shifted gears dramatically. The bright colors of the previous emblem disappeared, along with the boxes surrounding the white sans serif letters. Taco Bell changed to a more block-serif style font, with a slightly Mexican vibe to it.

The redesign brought an entirely new visual identity to the Company, and it remained with the brand for more than a decade.

In place of a colorful wordmark, Taco Bell used a simple, sleek, and monochrome design, with small, yet sharp serifs to add a touch of flourish to the aesthetic.

One of the most iconic moments in the Taco Bell logo evolution was in 1985, when the logo first embraced the new bell design. The new Taco Bell logo font was slightly different in this emblem, though it maintained a lot of the same impact as the previous design.

In this case, however, the serifs were slightly more curved.

The iconic bell was showcased in a green, red, and yellow color palette, placed above the bold lettering. The colors were similar to those on the traditional Taco Bell logo. This image remained with Taco Bell for almost a full ten years.

This version of the Taco Bell logo was one of the shortest-lived in the Company’s history. The secondary emblem was designed in 1992 and featured a different color pallet entirely – one which would remain with the company going forward.

The bell, in pink, was placed on a purple background, and the Taco Bell wordmark was placed underneath.

Though the font of the 1992 Taco Bell logo was the same as the previous design, it split the word “Taco Bell” into two levels, making the emblem more compact.

The Taco Bell logo redesign in 1994 refined the contours of the previous design and enhanced the color palette. The middle of the bell now had a golden highlight, and the pink became much brighter. The Company also placed a block arch behind the bell design, to help it stand out.

The typeface of the Taco Bell logo changed again here, with a capitalized inscription in sans serif font. This design stayed the same for almost 20 years.

Finally, the new Taco Bell logo as we know it today arrived in 2016, with the pink and yellow coloring removed entirely. The design is a lot more simplistic than previous Taco Bell logo images. The silhouette of the bell is now in white, over a two-shade purple arch background.

Underneath the bell icon, you’ll see a slightly slimmer, more uniform version of the Taco Bell type in a sans serif format. The finished look is clean and minimalist but maintains a lot of the Company’s original visual elements.

Perhaps unsurprisingly, the Taco Bell logo aims to showcase the name of the Company and deliver a memorable icon to focus the attention of customers. The name of the business “Taco Bell” comes from the name of the founder, Glen Bell.

The bell icon above the wordmark also comes from Glen Bell’s name, while the purple coloring sets the brand apart as exotic and unique.

While the original color schemes were based on elements of the food, the Taco Bell logo became increasingly bold, over the years, experimenting with new shades. The choice of purples, pinks, and bright yellows helped to separate the company from other fast-food restaurants.

You can find variations of the Taco Bell logo here.

Every font used by Taco Bell has been a custom typeface. The brand went through multiple various to find the typography it uses today. The current font is a simple, sleek, and streamlined sans serif type, in block capital letters.

The current colors of the Taco Bell logo are much simpler than the previous variations. The font is often in black, while the bell is in white, and the arch background is in a combination of deep and light purples.

The most iconic image of the Taco Bell logo is the bell on the arch background. The archway seems to emphasize the image of the bell, even in its current simplistic form.

The transformation of Taco Bell

The Taco Bell logo was based on the name of the Company, and its creator, Glen Bell. The bell image also helps to convey an idea of excitement, celebration, and bold impact.

Glen wanted to create something new for the fast-food scene, and the bell icon seems to represent the arrival of something loud and exciting.

Customers have examined previous versions of the Taco Bell logo for hidden meanings. Some even believe the gold central circle in the bell in the 2016 logo was actually in the shape of a taco.

However, this hasn’t been confirmed by the Taco Bell team.

Today, the logo stands as a testament to the Company’s unique image, and a fantastic identifier to one of the most unique fast-food organizations in history.

Ready to start designing your own iconic logo? Reach out to Fabrik today.