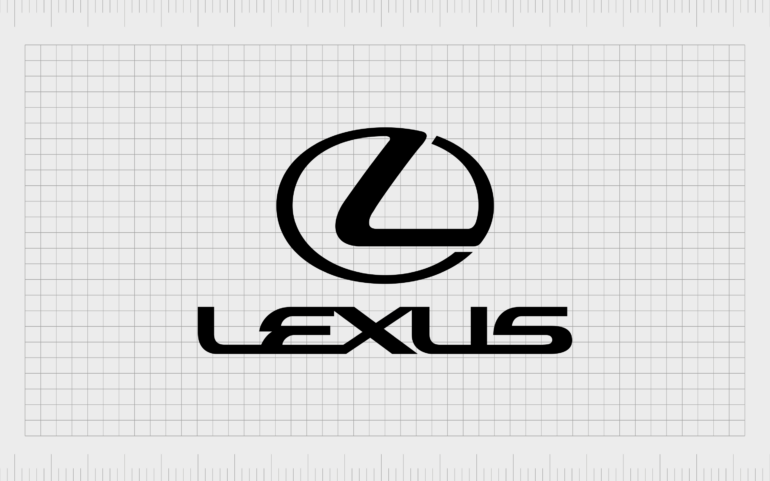 Everything you need to know about the Lexus emblem.

Do you know much about Lexus logo history? Lexus is the luxury vehicle sub-brand of Toyota, producing cars for more than 70 countries and territories across the globe.

Currently, Lexus is the biggest-selling Japanese brand for premium cars, and it ranks among the top ten Japanese brands in the world.

Though Lexus launched a relatively short time ago compared to some brands (in 1989), it’s experienced a fantastic rise to fame over the years. During this time, the Lexus symbol has grown increasingly recognisable too.

The Lexus car logo today stands alongside a host of premium car emblems as a symbol of speed, precision, performance, and luxury.

Let’s take a look at the Lexus logo history.

Lexus, launched originally in 1989 as a sub-brand of the Toyota company, was part of a project to build a new luxury brand for the Toyota group.

Lexus wasn’t the first name chosen by the company but was instead altered from the name “Alexis”, which was suggested as part of 219 prospective names for the new venture.

Some experts theorize the name “Lexus” is an acronym for “Luxury exports to the US”. Others believe it’s a combination of the words “luxury and elegance”.

Whatever the reasoning behind the name, it helped to form the foundation for the Lexus logo, which features a large “L” shape inside of an oval border.

The current Lexus car symbol is a simple and recognizable image. The Lexus emblem, which appears in both branding for the company, and on the vehicles itself, is a stylized “L” encircled by an oval with a steel grey finish. The “L” almost looks a little like an arrow, or a curved road.

According to the company, the emblem helps to symbolize the smooth curves that capture the rounded and aerodynamic quality of Lexus vehicles.

The Lexus symbol may also be accompanied by the wordmark for the brand, the name “Lexus” written in all-capital letters, in a stylized sans-serif font.

Lexus is the luxury vehicle division of Toyota, created at a similar time to when Nissan and Honda, two Japanese rivals, were creating their own luxury divisions. The vehicles produced by Lexus are created mostly in Japan, with manufacturing based in the Kyushu and Chubu regions.

Since the 2000s, Lexus has rapidly increased sales outside of the US, creating new dealerships in locations all around the world. Lexus has also introduced a host of hybrid vehicles to many markets.

The company defines itself as a company in “pursuit of perfection” and competes against market leaders like Mercedes Benz and Audi.

As a luxury sub-brand of Toyota, Lexus follows similar design principles to the main brand, which focuses on elegance, simplicity, and luxury.

The Lexus car logo is one of the few automobile emblems which has remained largely consistent over the years. Still relatively new compared to other car brands, Lexus has held onto a clean and simple image since the beginning.

The logo was originally designed in 1988, at the same time when Toyota was working with branding and marketing companies to come up with the overall image and name of the brand. The design was chosen based on the name of the company and features a letter “L” to highlight the name.

There have been some slight changes to the Lexus logo in the shape of the oval over the years. In some cases, you might notice the oval surrounding the “L” is open, while in others, it’s closed all around the letter. 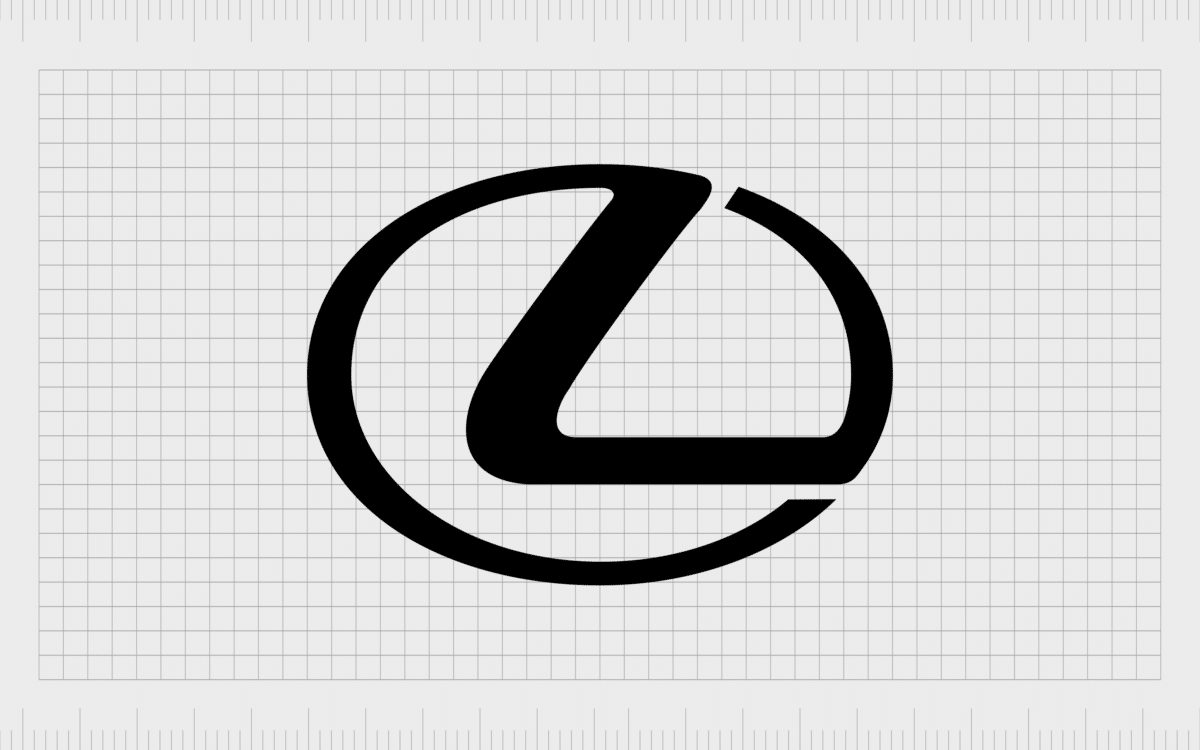 It’s difficult to determine an exact time when these changes were introduced, however.

The Lexus symbol, according to the company, was chosen to be instantly recognizable for the brand, while highlighting the unique aesthetic of the company. Lexus wanted something both simple and refined, yet capable of depicting the smooth curves common on Lexus vehicles.

According to some expert, the shape of the logo also supposedly follows a precise mathematical formula and was designed by Hunter Communications and Molly Designs.

The shape of the “L” in the Lexus logo doesn’t match the “L” shape in the brand name sometimes shown alongside the emblem. The wordmark has its own unique font, with a particularly stylized “E”, and very close spacing between the letters.

The original color of steel grey for the Lexus logo symbolizes sophistication and modernity, similar to the powerful black used in some versions of the logo. The choice of an oval shape rather than a circle highlights harmony and perfection. 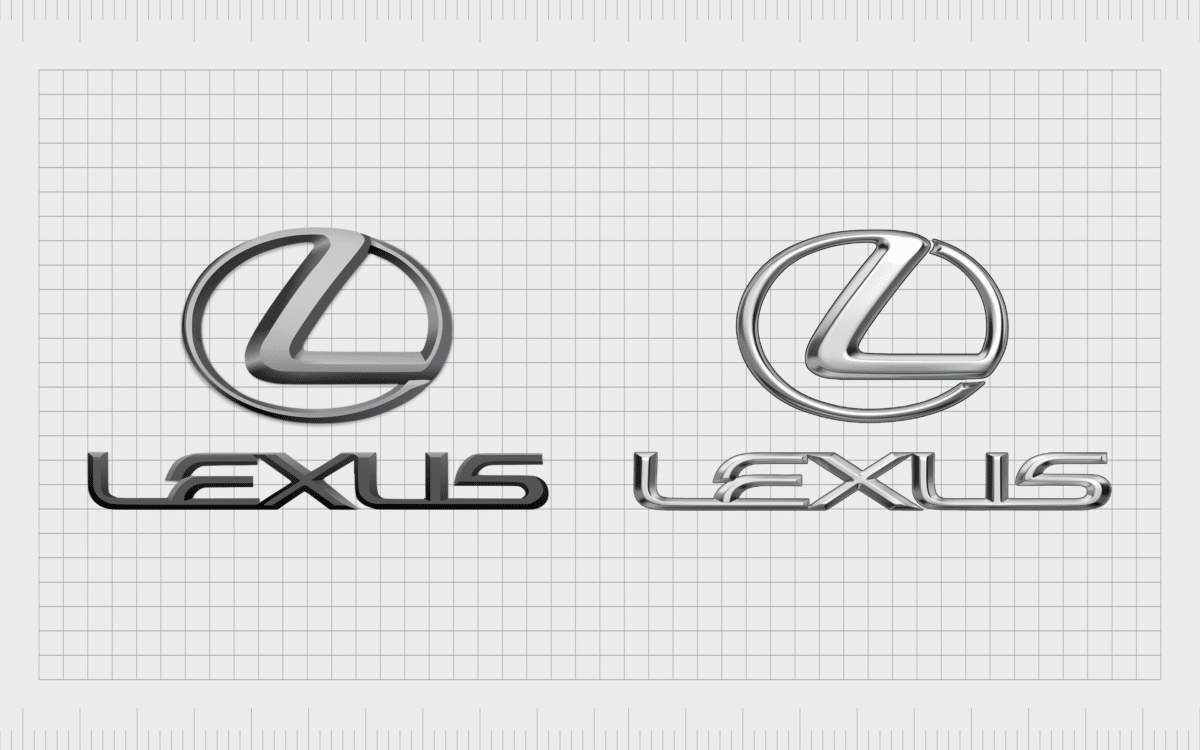 As mentioned above, the Lexus logo color has remained mostly the same over the years. The original choice for the color of the old Lexus logo was steel grey. This is still the shade you’ll see with many versions of the new Lexus logo.

However, you might notice a slightly more metallic finish to the symbol in some cases, thanks to the use of gradients.

In some cases, the Lexus logo color can also shift to black and white. The use of the monochrome logo is most common in marketing materials and press releases, while the chrome option is available in a range of branding assets.

Grey usually symbolizes sophistication, while silver stands for modernity and creativity. Black and white are usually representative of power and elegance.

The Lexus logo font is a unique stylized type, created specifically for the brand. The font for the Lexus wordmark is a sans-serif all-capital letter typeface, made for the brand by its design team.

According to the company, the stylistic nature of the “E” and almost connected “X” is intended to look like an arrow, pointing ahead to the future.

The letters in the Lexus wordmark are extremely close together, to the point where they almost look connected – helping to create a stylistic flow. The use of various curves creates a sense of balance and comfort in the brand image.

The “L” within the Lexus oval is a very different font to the type used for the rest of the wordmark, though it has a similar weight to it. The “L” here also eliminates any harsh angles in exchange for a softer, smoother curve.

The Lexus logo is much simpler than many of the other car logos available on the market today. There isn’t a great deal of hidden meaning behind this emblem, but it still makes a significant impact on everyone who sees it.

Today, the Lexus logo serves its purpose as a symbol of luxury.

Following a very similar design strategy to the larger Toyota logo, the Lexus symbol is a sleek and streamlined creation, with soft curves designed to remind you of the cars themselves.

The effectiveness of the logo meant the company didn’t have to make many changes to the image over the years.

Remember to check out our other car logo posts if you’d like to learn more about the famous symbols behind leading brands.