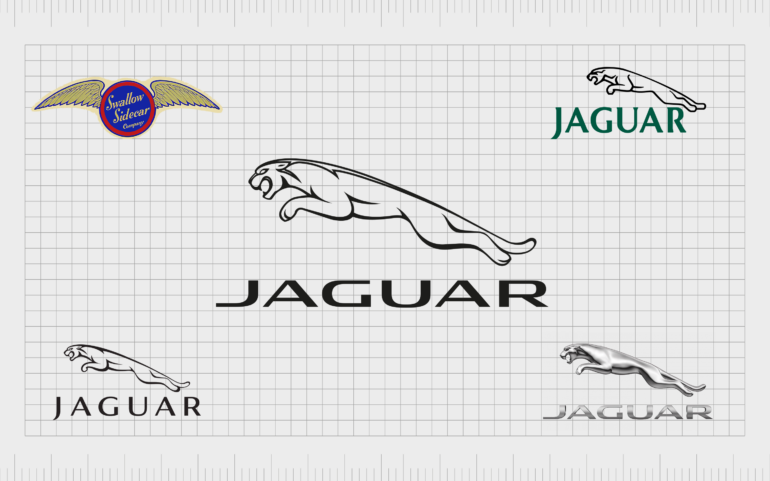 How much do you know about Jaguar logo history? The Jaguar logo has a huge presence in the automobile market today, often associated with one of the most powerful and luxurious brands of all time.

Since launching almost 100 years ago in the UK, the Jaguar brand has earned the attention of car enthusiasts around the world. Operating as part of BMC and Ford, before becoming a part of the Land Rover group, the Jaguar company has evolved over time, delivering ever-more amazing cars.

Today, we’re going to be looking at the history of the Jaguar logo and where this unique symbol came from.

The Jaguar car logo is one of the best-known vehicle symbols in the world. Currently owned by Tata Motors, Jaguar has built its image as a powerful manufacturer of luxurious, sporty cars over the decades.

Today, the Jaguar emblem is known as the “Leaper”, and it features a sleek, jumping Jaguar.

Instantly recognisable on the hood of any vehicle, the Jaguar “Leaper” is a beautiful, yet simple image. Usually present in silver or chrome on a car but shared in shades of black and white in marketing materials, the symbol is sleek and sophisticated.

The Jaguar car logo depicts a jaguar cat mid-pounce, with its body elongated and teeth bared. Beneath the image, Jaguar sometimes also includes its wordmark, written in block capital letters, in a sans-serif font.

The Jaguar company is a luxury vehicle brand, and a multinational British car manufacturer. The company actually started life as the Swallow Sidecar company in 1922, producing motorcycle sidecars.

After a while, Jaguar began producing bodies for passenger cars, under the ownership of the S.S. Cars Limited brand.

Over the years, Jaguar has had a variety of different owners, including British Motor Holding. Currently, Jaguar belongs to the Land Rover company. In February 2021, Land Rover and Jaguar announced all cars made under the Jaguar brand would be fully electric by 2025.

The Jaguar symbol didn’t start off as the leaping jaguar we know today. If we trace the old Jaguar logo back as far as possible, we can see how the image evolved over the years. Here’s a quick insight into some of the major Jaguar car logos over the years. 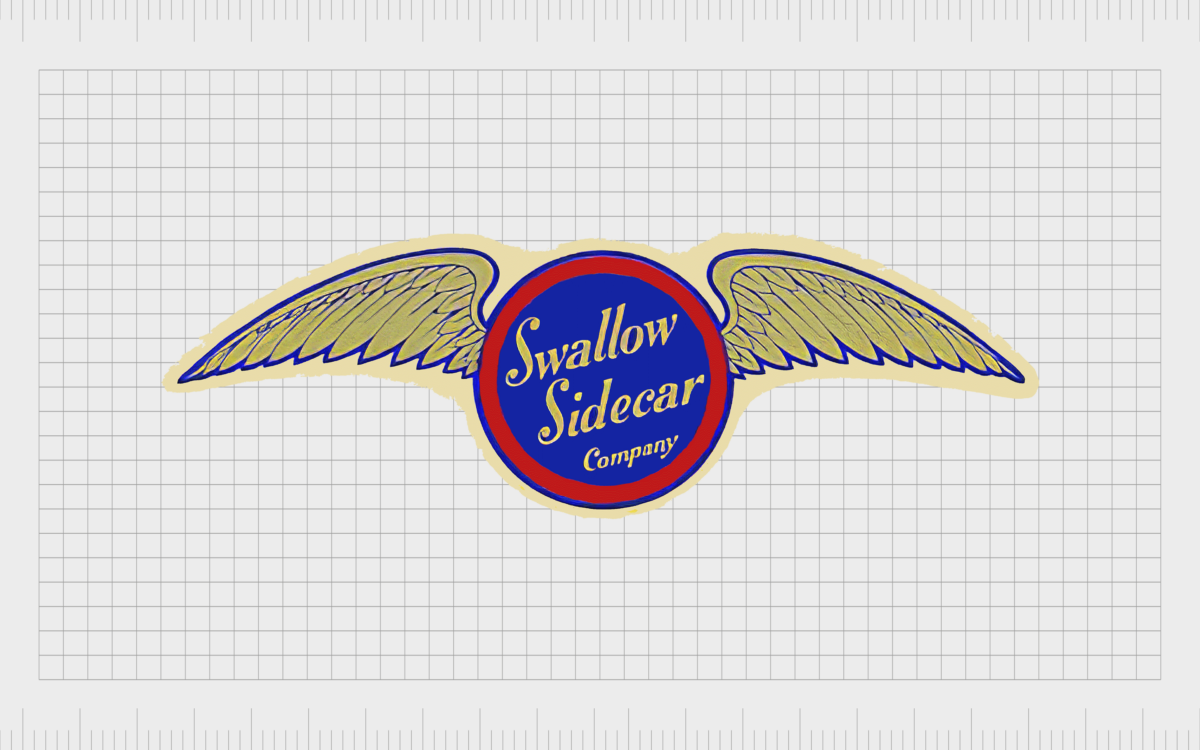 In 1992, the Swallow Sidecar company was responsible for the creation of sidecar products for motorcycles in the UK. This is the business destined to eventually evolve into Jaguar.

The company had a logo depicting its name inside of a blue circle with a red outline. The circle also had a set of two yellow-gold wings. 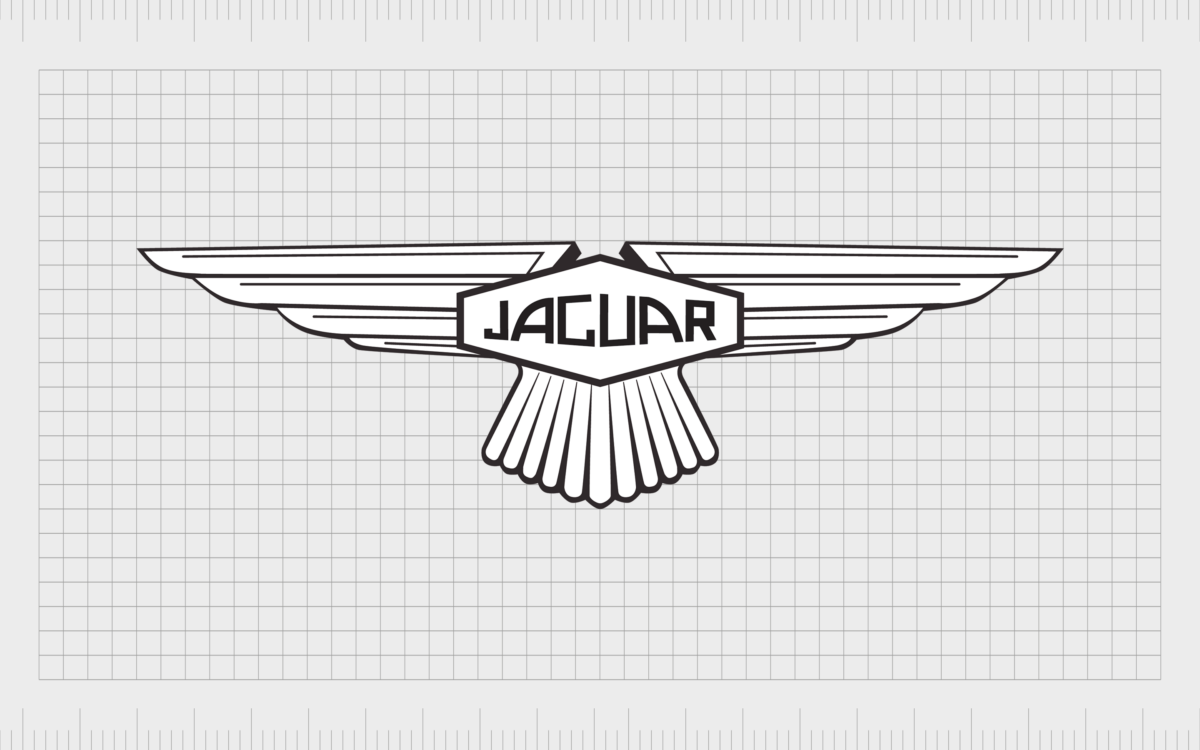 When Jaguar first emerged as a car company in the 1930s, the initial logo for the company seemed to take some inspiration from the Swallow Sidecar company. The logo was a hexagon with eagle wings and a tail, as well as a wordmark in the middle of the image. 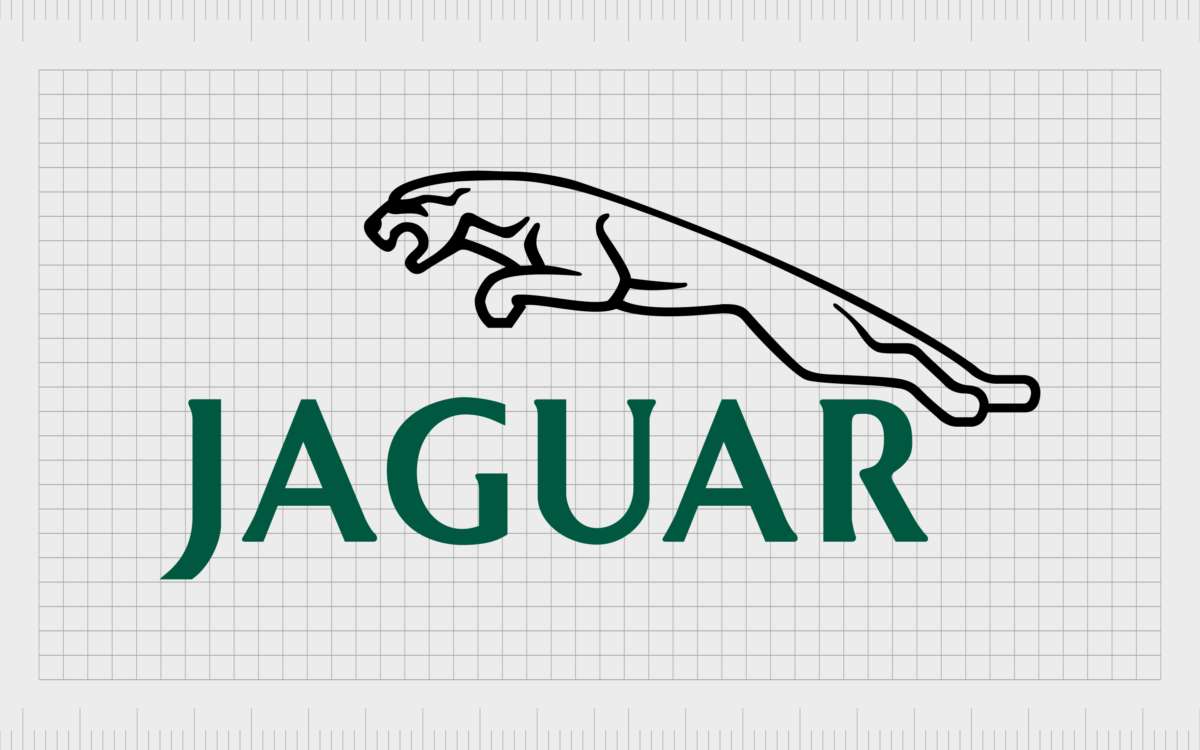 The first iteration of the new Jaguar logo most people know today was introduced in 1945. The leaping Jaguar produced for this year is very similar to the one we know now. The contour of the animal was black, and it had the wordmark for Jaguar written in all capital letters underneath.

One significant difference between the Jaguar logo today and the one we had back in the 1940s is the wordmark was a deep shade of dark green, a color often associated with wealth.

This version of the leaping Jaguar logo was altered slightly over the years, as the designers experimented with more streamlined designs, featuring smoother curves and fewer angles. The wordmark also became black, with a slightly thinner typeface.

There was a brief period of time in Jaguar logo history where most of the colors were changed, and the team considered using a figure of a Jaguar’s head in a red circle. 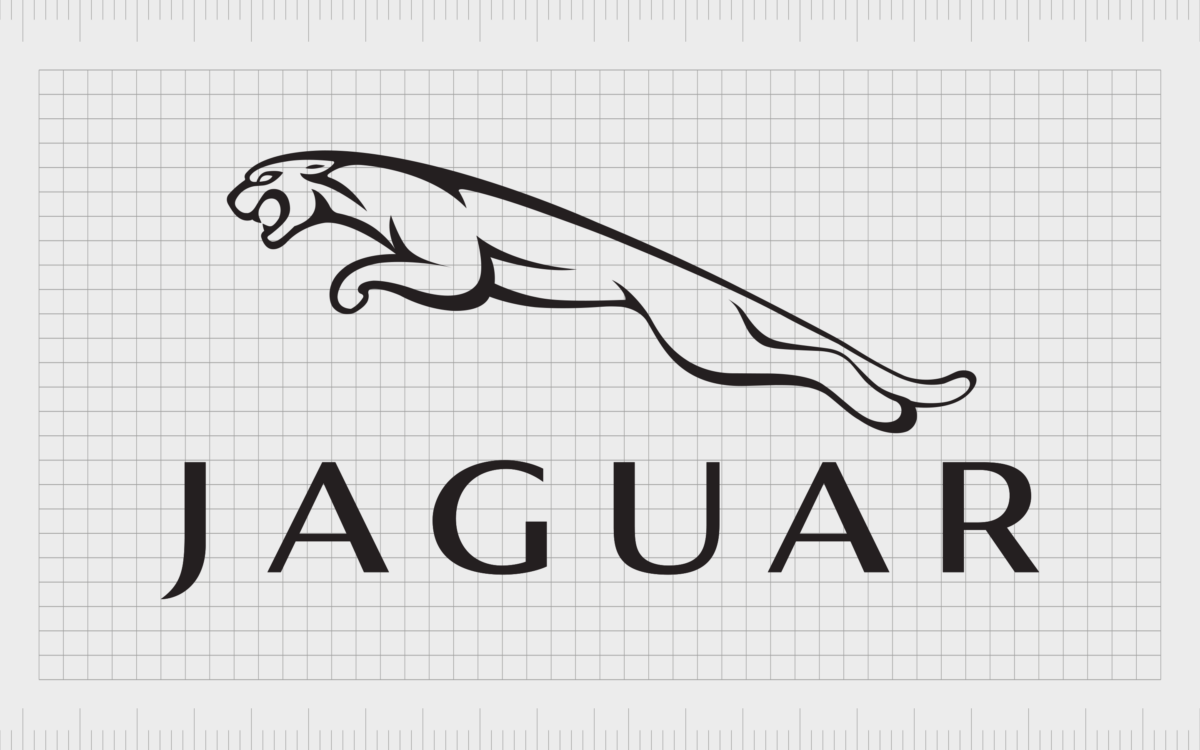 In 2001, the redesign of the Jaguar logo simplified the mark’s visual identity to simple black on white. The various elements of the badge were refined and modernized, and the leaping cat got a more professional, cleaner look.

The typeface here is a contemporary but modern sans-serif. 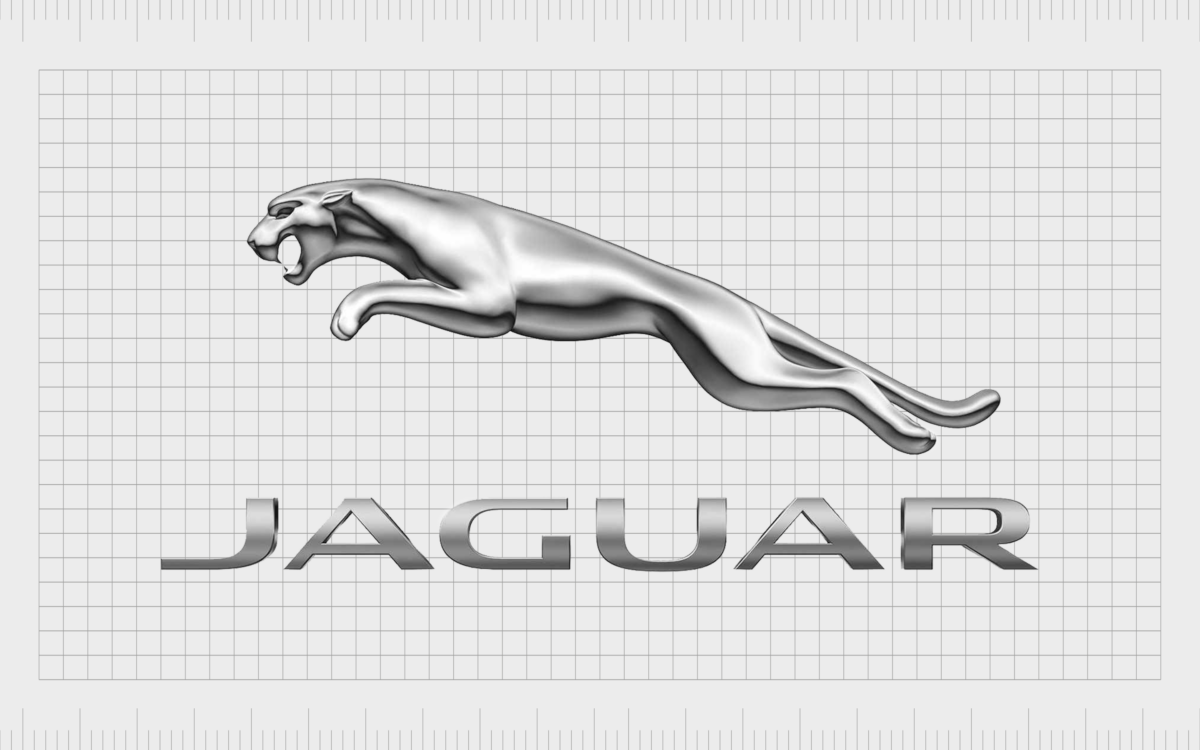 The current Jaguar logo as it stands now is a three-dimensional figure of the Jaguar animal, leaping in silver grey. The bold and confident wordmark underneath the animal is a little broader than the original type.

It’s common for automobile manufacturers to use animals in the development of their logos. Most of the time, these animals are chosen for speed, like the Mustang horse, or for their connection with ideas of freedom, like the wings of a bird.

The Jaguar symbol is connected with ideas of power, speed, and grace. According to the brand, the animal represents performance, ambition, and strength. The leaping jaguar has a snarl on its face, designed to demonstrate the vitality of the creature.

The decision to have the animal leaping forward is apparently to remind the viewer of the rapid motion and performance of the Jaguar vehicle, which performs with the precision of a jaguar.

The primary Jaguar logo color today is a gradient silver/grey. The three-dimensional silver is intended to look the same on marketing materials as the badge you’d see on a Jaguar car. The wordmark accompanying the Jaguar symbol also often appears in silver.

There are occasions where the Jaguar logo might be printed in black and white, but for the most part, the silver and metallic image is the most common.

The typeface used for the Jaguar logo is unique to the company, but many experts say it’s a modified version of the “Optima” type. The Optima typeface was designed in 1958 by Hermann Zapf.

Although the company has experimented with the use of serif fonts in the past, the current Jaguar font is a sans-serif type, written entirely in capital letters. The significant amounts of spacing between the letters helps to make the font more legible.

If you’d like to learn more about the companies in the automobile industry and the meaning behind our logos, make sure you check out our other Logofile posts.