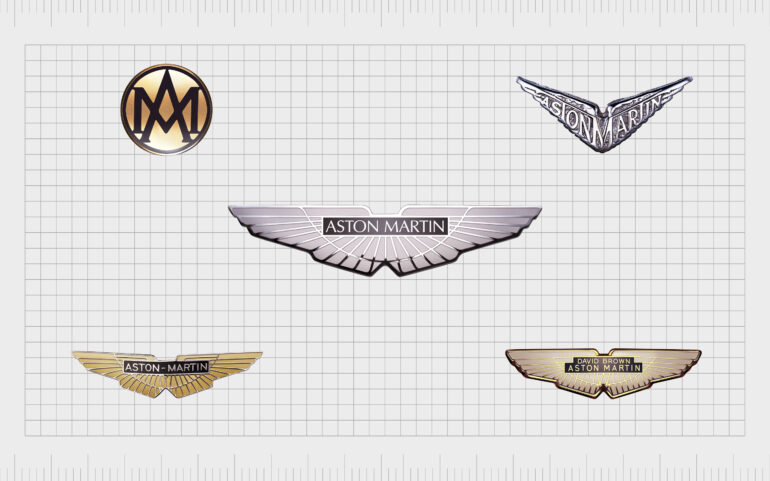 Getting to know the Aston Martin wings!

The brand, best-known for its production of high-end British sports cars, has earned recognition around the globe over the decades, thanks in parts to its unique visual identity.

Like many car companies, Aston Martin’s logo sits as a badge of approval on every vehicle built by the organization.

Today’s Aston Martin symbol features a green rectangle sitting atop a pair of slim, white wings. Like many popular car brands, Aston Martin places its name within the logo, like an artist signature on every car.

Though the Aston Martin insignia may not be as complex as some other logos, such as the Alfa Romeo symbol, it’s definitely eye-catching.

The current Aston Martin logo design builds on one of the most memorable features of the Company’s image over the years – the Aston Martin wings.

Though the Aston Martin logo meaning has been the topic of some debate over the years, most people agree the wings stand for purity, quality, and the speedy motion of Aston Martin cars.

Launched in 1913, Aston Martin is a British manufacturer of sports cars and luxury grand tourers. Created by Robert Bamford and Lionel Martin, the Company had something of a complex financial past, including a brief period of bankruptcy.

However, the business has also achieved massive success over the years too.

Today, Aston Martin is frequently associated with spy movies like James Bond, following the character’s use of the DB5 model for the Goldfinger movie in 1964. The Company also won the Queen’s Award for outstanding contributions to international trade in 2003.

The first name of the Aston Martin Company was actually Bamford and Martin, but this title was changed to Aston Martin after Martin raced up the Aston Hill in Buckinghamshire in 1914.

For some time, no official Aston Martin emblem emerged. It wasn’t until 1921 that the first Aston Martin symbol was produced. 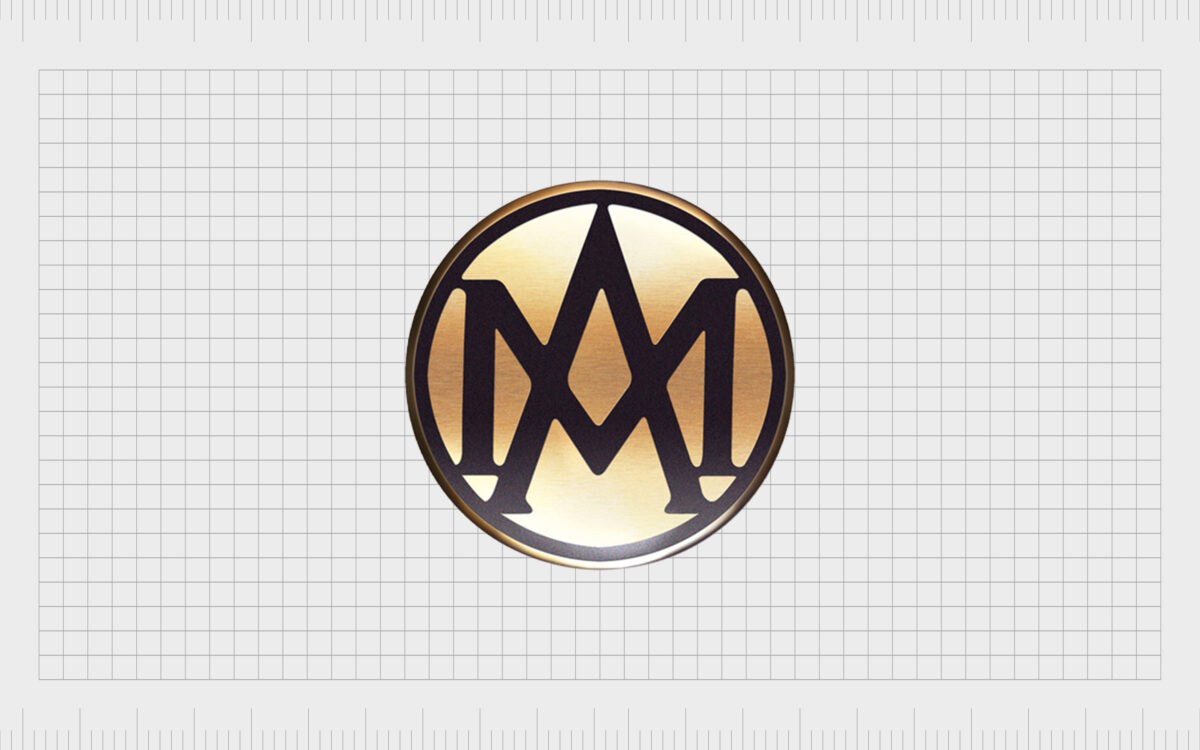 1921 marked the beginning of the Aston Martin logo evolution over the years. This old Aston Martin logo was an art-deco style bade, featuring a black circle on a golden background. The letters “A” and “M” were overlaid on top of the golden circle in a classic serif typeface.

The design for the original Aston Martin logo wasn’t very unique, but it was a classical and elegant choice for the time, similar to other luxury company emblems. 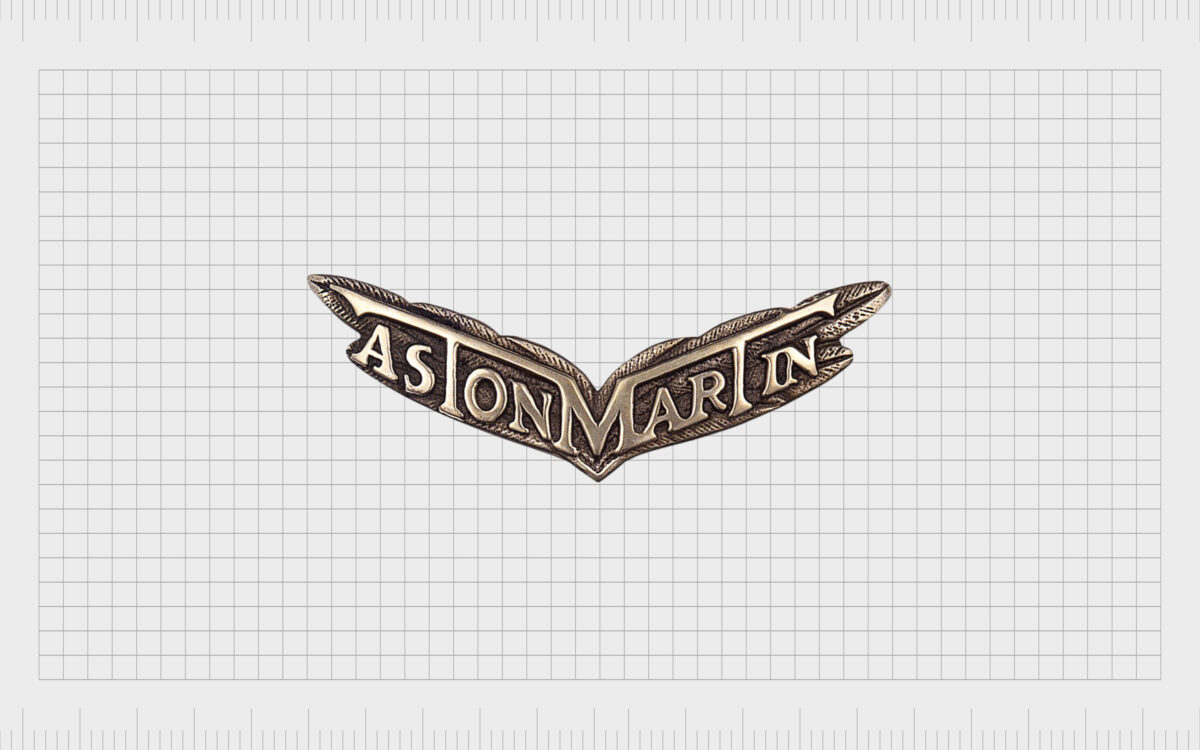 In 1927, Aston Martin logo changes led to the creation of the first set of wings for the emblem. Though the symbol is far removed from the image we know for the Aston Martin company today, it’s a good insight into the beginning of the idea.

The emblem, now cast in bronze, featured a stylistic M between the connected words “Aston” and “Martin”. The M had arrows reaching out at either side, connecting it to the “T”s in the middle of both words. A set of simple wings appeared behind the word mark. 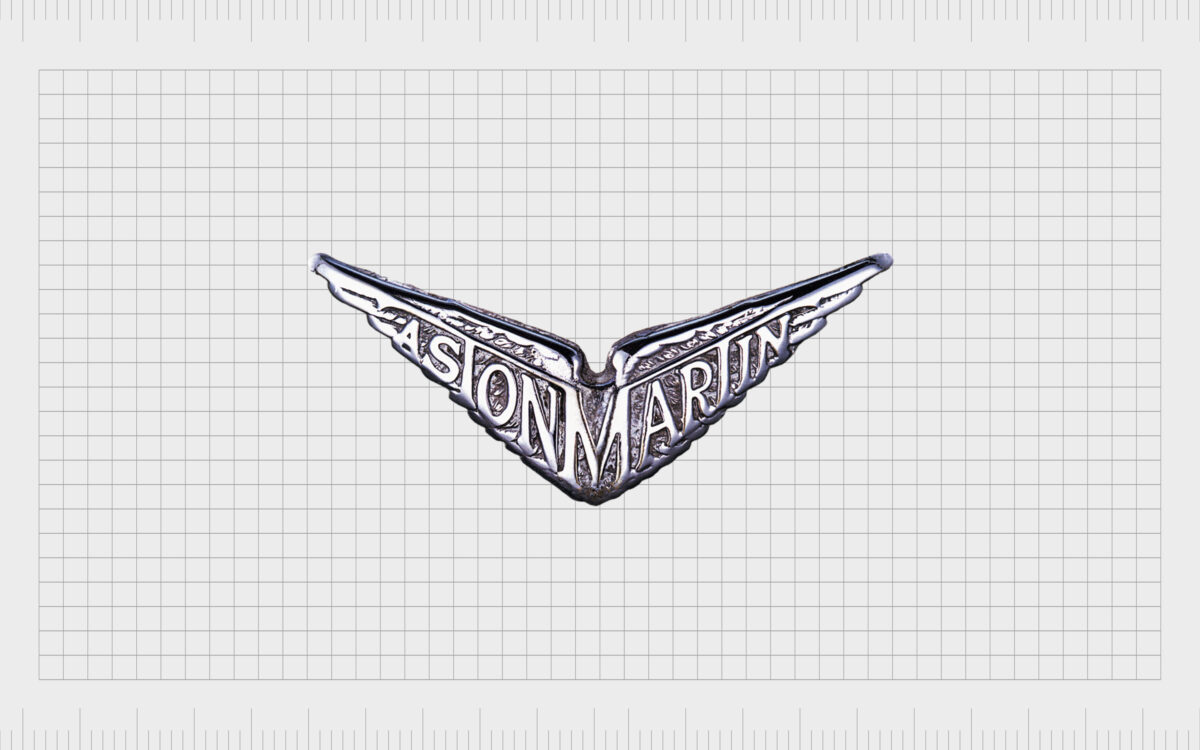 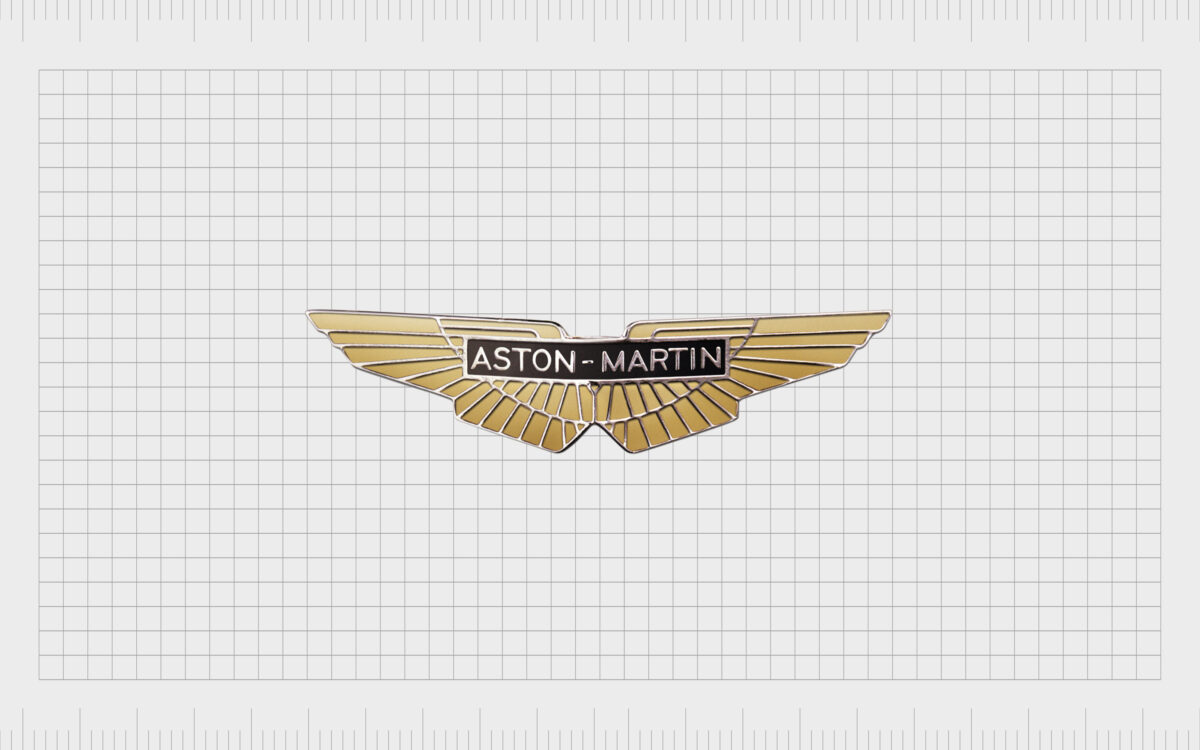 1932 was an important year in the journey of Aston Martin logos over the years. The shape of the Aston Martin wings changed to something simple, modern, and less angular. The wordmark also lost its shape, appearing instead in simple serif text within a small black rectangle inside the emblem. 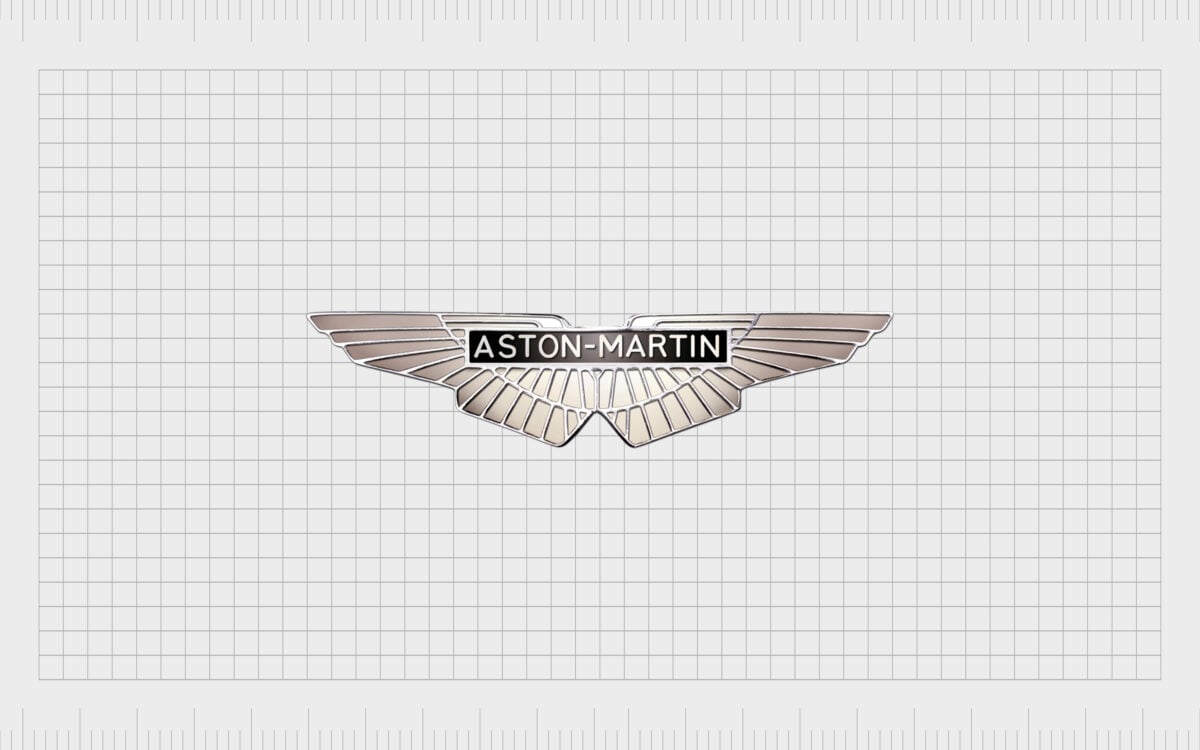 The color palette changed from silver to gold and black, creating a sense of luxury. In 1939, however, Aston Martin decided to change its logo color yet again, switching back to silver and black, while simultaneously refining the shape of the new emblem. 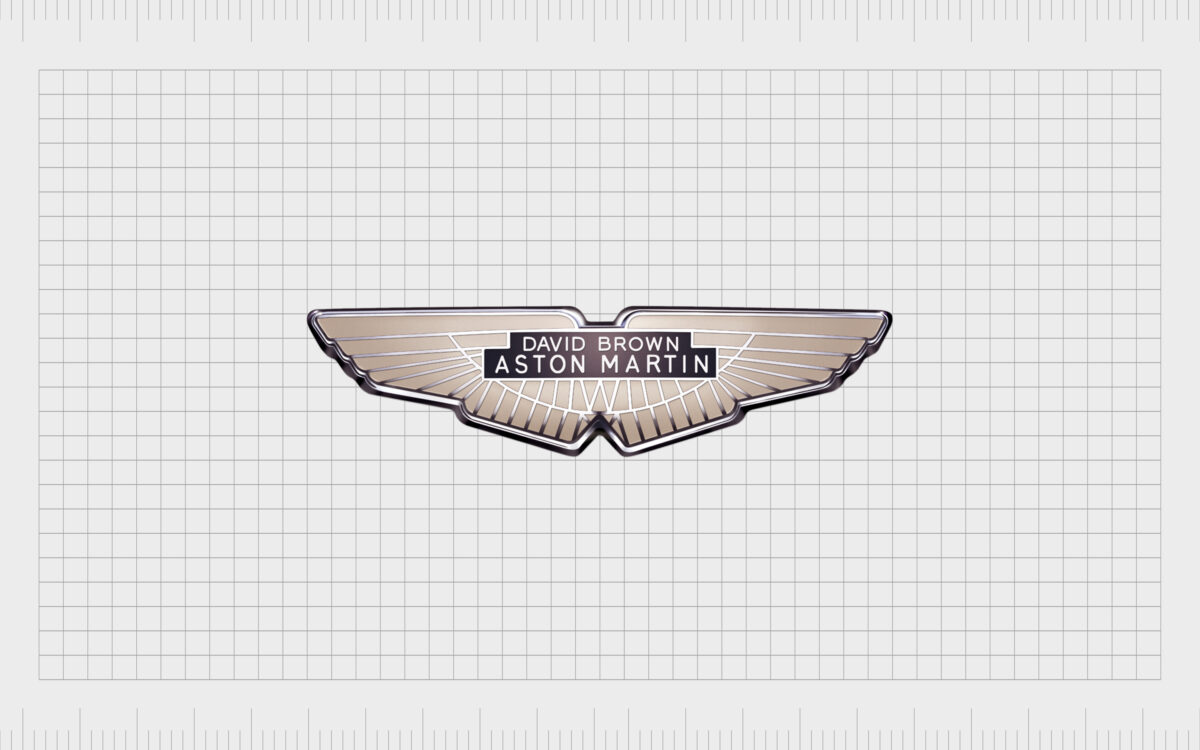 One important moment in the history of the Aston Martin logo through the years, occurred in the 1950s, when David Brown took over the brand. At this point, the Aston logo changed shape slightly, making the wings appear more blocky- like a car grill.

The words “David Brown” also appeared above the “Aston Martin” rectangle in the same font. 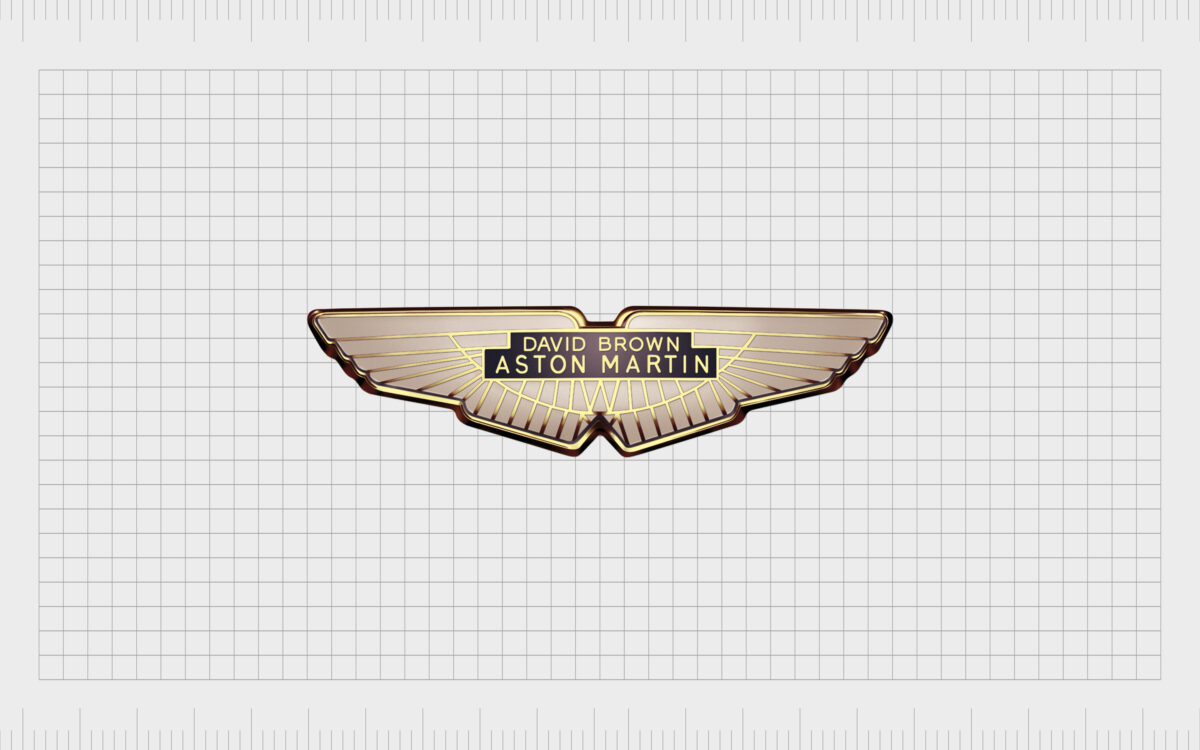 Though this version of the Aston Martin symbol began in silver and black, it changed in 1971 to gold and black, once again attempting to add an element of luxury to the brand image. 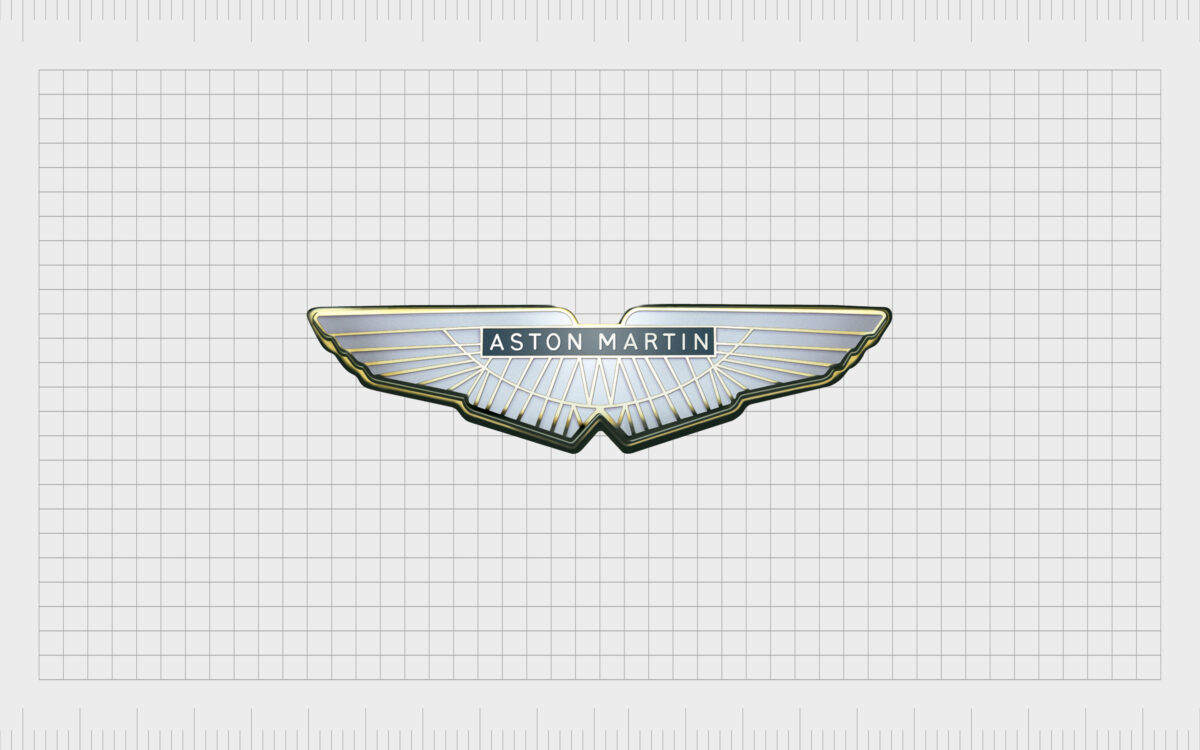 Ownership of the Aston Martin Motor Company changed again in 1972, when the brand was purchased by Company Developments Ltd. David Brown’s name vanished from the logo, and another change was made to the Company’s color palette.

This time, the background of the wings was a soft grey, while the outlines were done in gold. 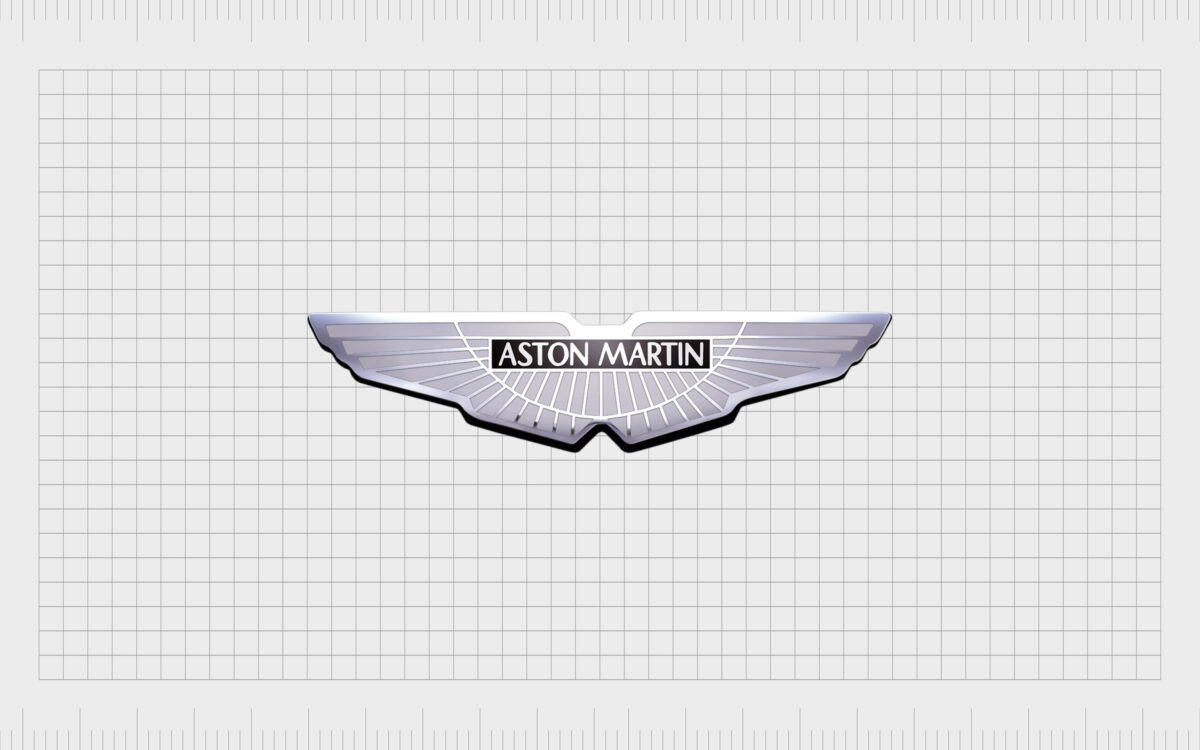 1984 introduced the basis for the iconic Aston Martin wings, with a new, more eye-catching design. Returning to the grey, silver, and black color palette, the 1984 logo made the wings more elegant and sophisticated. The letters in the wordmark were also slightly narrower in this design.

In 2003, a more refined version of the logo appeared, this time with no silvers or greys at all. The Aston Martin wings are now drawn in a simple black outline. The rectangular box holding the Aston Martin logo font became a deep green, while the writing within is white. 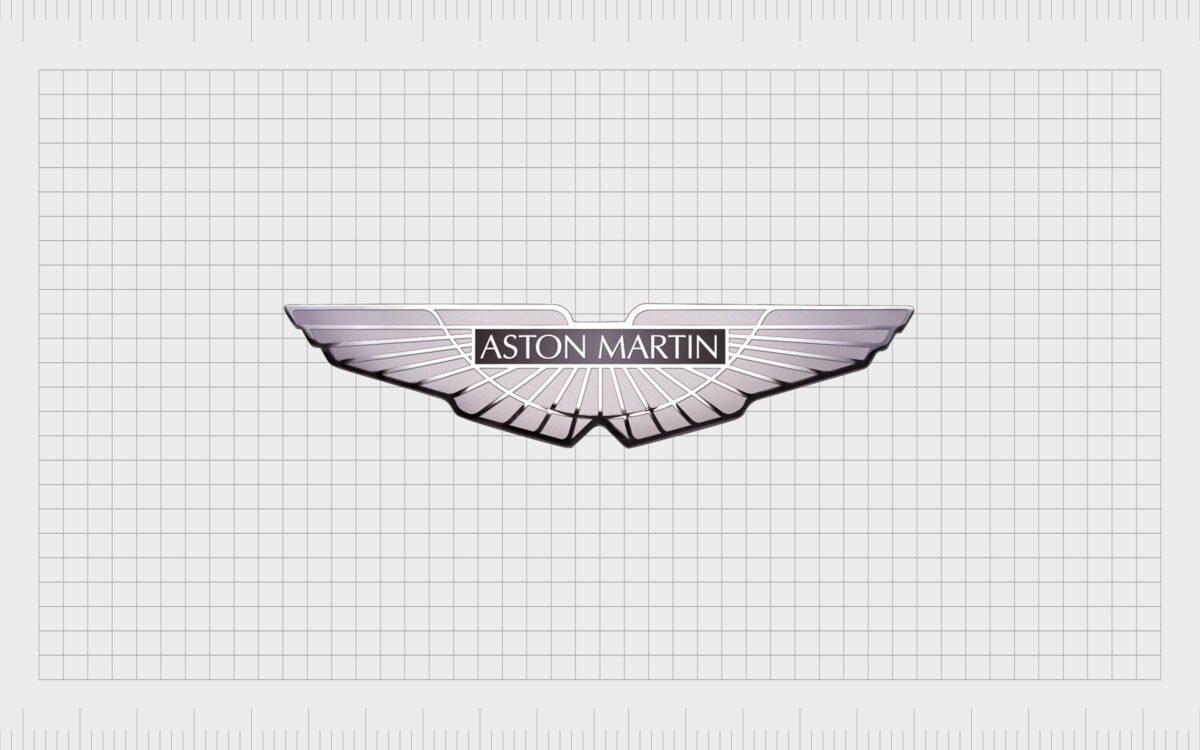 The Aston Martin emblem and wings

Though the wings of Aston Martin have changed several times over the years, taking on new shapes and elements, they deliver a consistent idea of what the business stands for. A set of wings reflects ideas of speed, freedom, and purity.

The rectangular box and wordmark within the emblem showcase the sophisticated nature of the Aston Martin brand.

The Aston Martin logo color has changed a few times over the years. Often, the Company jumped back and forth between iterations of their emblem in different metallic shades, including gold, silver and bronze.

Ultimately, however, the Company decided to choose a more simplistic palette for the latest version of the logo.

The deep green of the banner for the Aston Martin wordmark symbols wealth, luxury, and creativity, while the white font demonstrates classical style and purity. Black is a shade commonly associated with stability, strength and sophistication.

What font is the Aston Martin logo?

The Aston Martin logo font has remained relatively consistent over the years, though the weight and placement of the letters in the wordmark have changed slightly. Currently, the font is “Optima Roman”, a simple serif font with very small flourishes.

This classical font is the perfect choice for a brand keen to show an image rich in sophistication, professionalism, and heritage.

Today, the modernized and simplified version of the logo is an excellent insight into the Company’s ability to pay homage to it’s past, while keeping an eye on the future.

The Aston Martin emblem is minimalist, elegant, and sophisticated, symbolizing a dedication to luxury, and a timeless focus on quality.