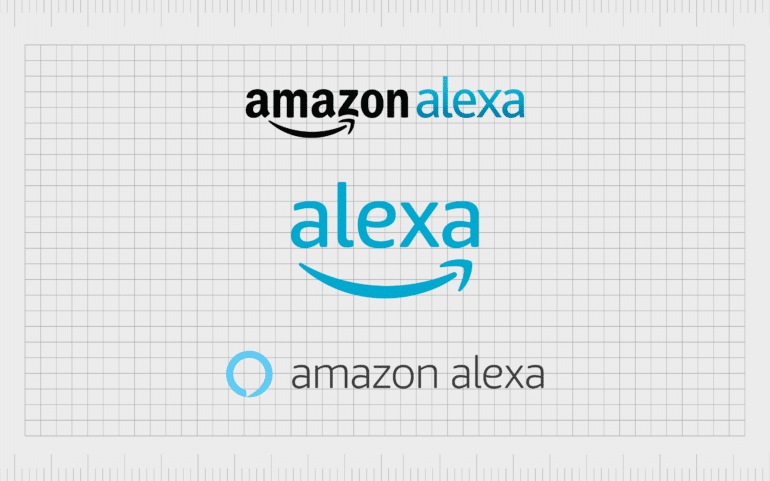 The Alexa symbol, fonts and colors.

The Alexa logo is something most of us are familiar with at this point. We see it on speakers and radio sets we can purchase online, indicating a connection with the world’s favorite smart assistant. You might even have your own Alexa-enabled device at home.

However, even if you can picture the Amazon Alexa logo right now, you might not know where it came from or what inspired its design.

Today, Alexa is credited with being one of the most transformative technologies of our time. The Amazon Alexa technology definitely changed the way we interact with technology and paved the way for the introduction of countless new tools.

Although there were assistants like Alexa on the market before Amazon made its selection of smart speakers, few achieved the same popularity as Alexa. Even now, when other smart speaker solutions are on the market, Alexa remains a top choice for many.

In this edition of Logofile, we’re going to give you a behind-the-scenes look at the history of the Alexa symbol and where it came from.

Alexa is an AI algorithm developed by Amazon in 2014. It’s hard to imagine a world without Alexa today, but the solution is actually just one part of Amazon’s massive tech empire. Similar to other tech companies, Amazon equipped Alexa with its own image and logo.

Alexa is a virtual assistant capable of helping users find information, set alarms, and even play their favorite music. Alexa currently has more than 90,000 features, and the number keeps going up.

According to the developers of Amazon Alexa, the aim of building this solution was to create a computer similar to the ones displayed on shows like Star Trek. They wanted a machine you could control with the sound of your voice.

The word “Alexa” was chosen for the solutions name for a variety of reasons. First, the hard consonant of the “X” made the name sharper and more memorable. The X is also sharp enough to be better recognized by NLP (Natural Language Processing) tools like Alexa as an activation sound.

The Alexa name was also chosen in reference to the Alexandria library.

Since the Alexa name was chosen for Amazon’s smart device, the title has also appeared in the full logos for the product. However, the new version of the Amazon Alexa logo doesn’t always include the wordmark – particularly when its printed onto the speakers themselves.

The evolution of the Alexa logo

When Alexa first emerged in 2015, along with its accompanying smart speakers (the Echo range), the logo for the system was a simple wordmark.

On the left you had the Amazon wordmark, with its “smiling” arrow and unique sans-serif font. On the right, we had a slightly wider sans-serif font, shaded in a blue gradient.

Aside from being a little wider, the original Alexa font logo was also slightly thinner. The designers chose a blue for the wordmark transitioning from light to dark (top to bottom), evoking a sense of enlightenment and calm.

In 2017, Amazon decided to redesign the Alexa logo. This time, the traditional “Amazon” wordmark disappeared, along with its memorable smiling arrow. The name “Amazon Alexa” used the same font all the way through – a lightweight sans-serif type in dark grey.

The new version of the font in the 2017 logo was based off the original design, though it’s far more simplistic this time. The blue coloring also disappeared from the logo and reappeared in the shading of a new emblem placed alongside the word “Amazon”.

Perhaps the most memorable component of the new Alexa logo, the blue and white symbol depicts a white speech bubble on a blue background. The graphic appears to have a double meaning.

While the white cloud symbolizes voice control, the blue background looks similar to the decorative LED strip which runs around the edge of the Echo speaker.

The new symbol is also a kind of badge of approval for a lot of products. When you see a radio system or speaker listed online, there’s a good chance it will demonstrate its compatibility with Alexa by showing the Amazon Alexa logo.

This is a great way for companies to gain the trust of their audience with a recognizable image.

The Alexa symbol now appears embedded into speakers like the Amazon Echo and Echo dot. The decision to make a graphic to go alongside the wordmark was a positive one, as it means Amazon can begin to create an image for itself not reliant on (quite a lot of) text.

When choosing the elements for the new Amazon Alexa symbol, it seems the designers were guided by a desire to keep things as clear, simple, and modern as possible.

The crisp sans-serif font used for Amazon Alexa’s logo is written in all lower-case letters. The font is called Amazon Ember Display and it is the main typeface for the Company today.

The colors of the Alexa logo are light blue and a deep grey. Officially, the colors also include white for the speech bubble. The exact shade of blue is Alexa blue, while the grey is called Squid Ink.

The symbol of the Alexa logo is a white speech bubble or cloud on a blue circular background. The blue circle represents the LED lighting on the Alexa speakers.

Though the Alexa logo might seem simple, it has a fantastic impact on its audience. This image doesn’t yet have the same loyalty connected to it as things like the Apple logo, which people often paste onto their laptops, and computers (even when they’re not made by Apple).

However, most people will instantly recognize the sign of Alexa on a speaker and use that image as an indicator of whether a device is trustworthy.

Where can I get the Amazon Alexa logo?

The Amazon Alexa logo, now an icon of the digital age, is present all over the web, and in our day-to-day lives. The chances are you see this symbol frequently in your workplace, home, and in the places you visit, as Alexa devices grow more popular.

Currently, studies suggest there around 40 million Alexa users in the US alone, and the number of users continues to go up as the complexity of the device evolves, offering more features and functionality.

If you’re creating your own article about the Alexa logo, or you just want to see it yourself, here are some resources to help you:

From the simple addition to the Amazon logo the Alexa symbol started with, to a brandmark and wordmark of its own, the Amazon Alexa logo has evolved well in the last few years.

Today, it ranks among some of the best-known logos in the world – particularly in the technology and audio industry.

Who knows whether Amazon will decide to maintain this logo going forward, or update it again as new Alexa devices come into the market.

Don’t forget to check out our other logo articles for insights into other technology logos and how they’ve transformed over the years.

Now read these:
—Understanding the Nintendo Switch logo
—An in-depth look at the Fortnight logos
—The story of the Pokémon logo symbol
—The old eBay logo to the present day
—Explaining the Van Halen symbol
—The story of the Rolling Stones logo
—History of the Gucci logo and symbol
—Exploring the Stranger Things logo
—Tidal Music symbol and logo story

Draplin Design Co.: Pretty Much Everything
$16.50
Buy on Amazon
Sale