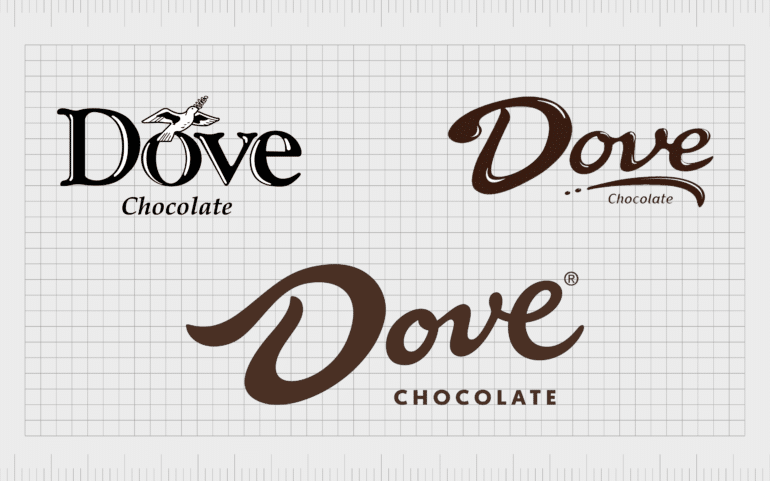 Unique to the United States, the Dove Chocolate logo is a symbol of luxury, indulgence, and deliciousness for fans of the candy brand. Dove has produced and sold chocolate in the United States since 1939.

However, for most of the world, it’s better known as the “Galaxy” company.

Built around a focus on luxury, quality, and sophistication, the Dove Chocolate brand has emerged as a well-known entity within the United States. Today, both Dove and Galaxy (the alternative version of the brand), are well-known around the globe.

For fans of all-things chocolate, we’re going to be taking a deeper dive into the wonders of the Dove Chocolate logo, and the history of the Dove brand.

Here’s everything you need to know about Dove, and the confectionary group’s unique brand identity.

Officially established in 1939, Dove Chocolate took its name from the Dove Candies & Ice Cream brand, a set of Chicago-based ice cream and candy shops owned by Leo Stefanos in 1939.

During 1956, Stefanos decided it was time to branch out and create something new, which lead to the design of Dove ice cream brand – sold throughout Chicago until 1985.

In the 1980s, Dove grew significantly, distributing ice cream bars around the United States. At the same time, the Dove Company emerged within the United Kingdom, selling as “Galaxy” in 1960.

In 1986, the Dove and Galaxy versions of the brand were both acquired by Mars, Incorporated.

Currently, Dove (and Galaxy elsewhere in the world), are responsible for the development of a wide range of chocolate products, including dark and milk chocolate, caramel, and other well-known names.

Dove produces Minsters, Ripple, Duetto, and Dove “Promises”. You may also be familiar with Bubbles, Truffle, and “Amicelli” chocolates.

Where did Dove Chocolate originate?

The Dove brand story is a little difficult to follow for some, because of the use of different names in various parts of the world.

According to the Dove Chocolate Company, the history of the organization first began in 1939, when a Greek-American founder named Leo Stefanos opened his Candies and Ice Cream store in Chicago.

Dove’s transition into the world of chocolate didn’t begin until 1956, when Leo apparently saw his child (Mike) chasing an ice cream van down the street. Leon decided to create a new ice cream, combining melted chocolate with blocks of ice cream.

The “DOVEBAR” as it was called at the time, was a revolution in Chicago.

After 38 years, Leo handed the reigns for the Dove chocolate brand over to his son Mike, who took the DOVEBAR to the Fancy Foods Show located in Washington. This was when orders for the DOVEBAR really took off, and orders started flooding in from around the country.

Where is Dove Chocolate made?

The Dove Chocolate Center of Excellence is responsible for the majority of Dove Chocolate production since the center’s opening in 2008. The rest of the chocolate comes from Chicago – the original home for the candy brand.

Dove Chocolate is one of the better-known chocolates in the United States today. Before the creation of the DOVEBAR in 1956, however, there wasn’t an official Dove logo for the company. Rather, most people knew the Dove Candies store for its script-style sign in California.

Interestingly, the romantic script typography in the first sign for Leo Stefanos’ shop isn’t too far away from the Dove logo we know today.

The first official Dove Chocolate logo appeared in 1956 with the arrival of the DOVEBAR ice cream bar, dipped in luxurious chocolate. The design featured a simple serif word mark, with a flying dove above the “O”.

The word “chocolate” also appeared underneath the wordmark.

In 2003, Dove updated its wordmark significantly for the first time. This version of the Dove logo featured a sleek script typography, similar to the original sign for the Dove store.

The image was specially created using highlights and shadows on a brown font to make the lettering look as though it was piped with liquid chocolate.

To add to the illusion the Dove logo was actually made with chocolate, the company included a dotted underline, and chose a deep brown color scheme.

The most recent version of the Dove chocolate logo is a slightly refined alternative to the previous image introduced in 2003. This logo adds a little more flourish to the “D” and the “E” of Dove, to make the wordmark look even more artistic.

The swirling letters still look as though they’re made with melted chocolate, though the dotted underline has disappeared entirely. Once again, the word “chocolate” appears underneath the brand name here, conveyed in sans serif font.

The Dove logo, intended to get anyone’s stomach rumbling with the thought of smooth, melted chocolate, is an iconic image in the confectionary landscape.

Interestingly, the logo we know for Dove isn’t exactly the same as the logo used for the UK version of the brand “Galaxy”, though the two brand marks do share similarities.

The Dove Chocolate logo also has a number of variations to consider for different items within the Dove product line.

For instance, the Dove Chocolate Discoveries logo gives the classic Dove wordmark a sense of sophistication and heritage, by placing it within the center of a stamp-style emblem.

Dove Chocolate like many of the most famous chocolate brands throughout history, focuses primarily on the use of swooping, fluid typography to convey ideas of silky soft chocolate.

You can find some helpful Dove Chocolate resources here:

What font does the Dove chocolate logo use?

Perhaps unsurprisingly, the Dove logo font, similar to many of the specialist fonts used for candy companies, is a custom typography. This script-style font is designed to look as though it was piped using melted chocolate.

The swooping and flowing lines are perfect for drawing the mind to the silky smooth chocolate behind a Dove Chocolate wrapper. Though different variations of the Dove Chocolate logo font have appeared over the years, the latest looks perhaps the most hand-drawn.

What color is the Dove logo?

The Dove logo colors have been mostly the same since the beginning of the Dove Chocolate brand. Although initially, black, and white was the most common set of colors associated with Dove, the company quickly embraced gradients of brown to depict silky smooth chocolate.

The Dove logo color today is a deep chocolatey brown, similar to Hex #6e2a0s. The coloring is intended to remind viewers of the chocolate Dove produces.

The Dove Chocolate logo is a well-known symbol of indulgence and deliciousness in the United States. Although the company might be better-known as Galaxy elsewhere in the world, the Dove brand hasn’t had any trouble building a memorable name for itself in the United States.

Notably, because Dove Soap and Dove Chocolate both have the same registered name, the two have been confused as coming from the same firm in the past.

If you’re interested in learning more about the incredible brands in the United States, you can find more guidance in our amazing Logofiles.