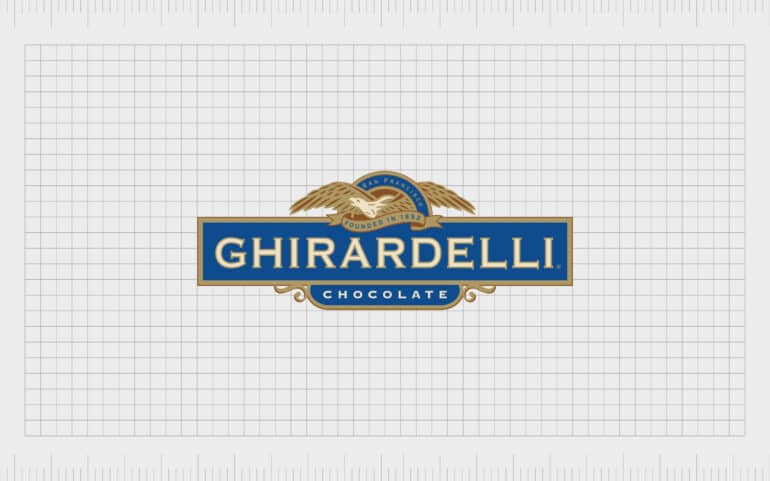 A symbol of timeless luxury and indulgence for chocolate lovers, the Ghirardelli logo has successfully made a lasting impact on the modern marketplace. Like many of the older confectionary brands still available today, much of the information available on Ghirardelli logo history is lost to time.

Launched around 170 years ago, Ghirardelli has been producing chocolate treats for sweet-toothed fans for longer than many of the other major chocolate brands in the world. Today, the organization is wholly owned by the Swiss confectioner, Lindt & Sprüngli.

If you’re not overly familiar with the history of Ghirardelli Chocolate, but you love the delicious creations of this iconic brand, you’re in luck.

Though the Ghirardelli brand is owned by Lindt today, this hasn’t always been the case. The brand was actually born in San Francisco in 1852 and named after its founder. Domenico Ghirardelli was an Italian chocolatier, with a true passion for his craft.

Born in Rapallo, Italy, Demico Ghirardelli received his education in the chocolate trade when he was an apprentice for a local candymaker as a child. By the time he reached the age of 20, Ghirardelli had already sailed to Uruguay with his wife to begin working in a coffee and chocolate company.

In 1849, Ghirardelli moved to California, opening a general store, where he offered supplies and confections to miners. The tent-based store was one of the first in the area.

Several months later, Ghirardelli also opened a second store in San Francisco, which became his first establishment in the city.

During 1856 and 1859, Ghirardelli opened his general store in California (Hornitos), where he perfected his recipes for chocolate.

Over the years, Ghirardelli experimented with a wide range of different products, but by the 1900s, the Ghirardelli Company was selling only chocolate and mustard.

Why is Ghirardelli so famous?

The Ghirardelli brand has evolved a lot over the years, producing a huge range of different products for dedicated customers. According to the website for the brand, the company is one of the few chocolate companies throughout the United State to control all of the manufacturing process.

Ghirardelli is also extremely cautious about the ingredients in its food, rejecting around 40% of the cocoa seeds shipped into the business on a regular basis. Today, the Ghirardelli Company uses a perfect chocolate manufacturing process to produce a wide range of chocolate flavors.

These chocolates are sold in both bar and square form.

What is the origin of Ghirardelli?

As mentioned, Ghirardelli started life as a simple store produced by Domenico Ghirardelli in California, to provide supplies to miners in the area.

Over the years, the company transformed, taking on new locations throughout California and San Francisco, and selling a range of new products.

Ghirardelli logos through the years

Variations of the Ghirardelli logo through the years are difficult to find in today’s digital world. The company has been around for around 170 years, making it the oldest operating chocolate maker in America to date.

However, the Ghirardelli brand hasn’t always been focused entirely on chocolate.

An advertisement from the California Miner’s Almanac demonstrates an insight into where the Ghirardelli logo began. The company used a simple wordmark to depict its brand in these early days, at a time when Ghirardelli was still selling supplies like coffee and chocolate to miners.

In 1871, we saw a slight update to the Ghirardelli logo wordmark in a new advertisement for the business. This version of the Ghirardelli font was a lot broader, and more modern, though not particularly easy to read.

The “C” in this variation actually looks a little like an upside down “G”.

Although it’s difficult to know for certain when the Ghirardelli bird first appeared in the logo, we can see examples of the eagle within Ghirardelli branding from old versions of chocolate jars produced in the early 20th century.

Once again, in this image, we see the wordmark for the Ghirardelli logo depicted in a bold, serif font.

While there are likely to be a number of Ghirardelli logos lost to history which we haven’t mentioned here, the version of the Ghirardelli logo with the iconic bird is one of the best-known. This current logo for the Ghirardelli brand reminds us of the heritage and story behind the evolving company.

Once again, there’s a wordmark in use here, with a serif font, in easy-to-read capital letters.

The flying eagle on the Ghirardelli logo is intended to highlight the transition of the original founder of the company into the American landscape.

Ghirardelli’s branding focuses heavily on the story of the founder travelling from Italy to the US, where he quickly opened up stores throughout California and San Francisco.

The eagle is a symbol of patriotism in the United States, as well as an image commonly associated with pioneering discovery, creativity, and freedom.

What font does Ghirardelli Chocolate logo use?

The Ghirardelli logo font is a unique typeface designed specifically for the brand. The design has changed a number of times over the years, though a serif-style professional design has always been common with this company.

The bold, serif font of the Ghirardelli logo today help to highlight the heritage and sophistication of the company. The word “chocolate” depicted in a “sans-serif” font helps to make the company appear more approachable to the masses.

The official font is similar to Copperplate Gothic.

What color is the Ghirardelli logo?

According to the Ghirardelli guidelines, PMS 288 blue is the preferred color of choice for the background in the Ghirardelli banner. The PMS 732 color brown is used for various aspects of the accents in the logo, while PMS 872 gold helps to outline various elements of the logo.

The Ghirardelli logo today is one of the most memorable logos in the chocolate landscape, designed to capture the hearts of potential chocolate lovers with an elegant and unforgettable image.

Combining a sophisticated wordmark with the power of an emotional emblem, the Ghirardelli logo definitely does a good job of standing out.

Today’ Ghirardelli’s logo is one of the better-known in the world, even if we can’t trace the history of the image back too far. Make sure you check out our other Logofiles for more insights into the wonders of some of the world’s best logos.