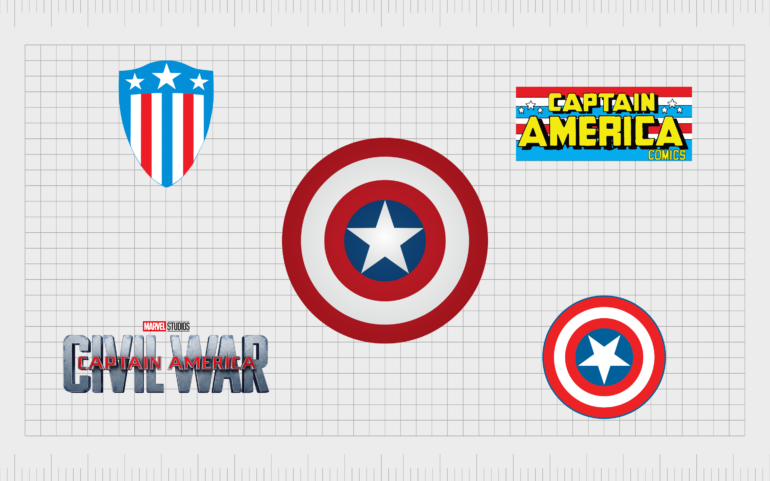 If you know anything about classic superheroes, you’re probably familiar with the Captain America logo. Perhaps one of the most memorable characters in all of Marvel creators, Captain America was designed to be the first American superhero, and he was the first “Avenger” of the iconic Marvel franchise, in terms of when the super soldier was created.

While Captain America, like many superheroes, doesn’t have a classic logo in the same sense as a standard brand or company, the creation still comes with an iconic image.

The most well-known and defining element of Captain America’s identity is probably his shield, which has come to be recognized as the ultimate Captain America symbol. However, you may also recognize the character by his red, white, and blue patriotic outfit.

Here’s your guide to the Captain America logo.

Captain America is a classic superhero belonging to the Marvel Comics industry. The character Steve Rogers, and his alter ego Captain America were created by cartoonist Jack Kirby and Joe Simon.

He first appeared in the comic “Captain America Comics” issue number 1, in 1941. At this point, the design was for “Timely Comics”, a predecessor of Marvel.

Intended to be the ultimate patriotic superhero, Captain America was a beacon of the USA, wearing a suit made to look like the American flag, in mostly blue with red and white stripes and a white star.

Though demand for superhero stories fell after the war, and Captain America comic was discontinued in 1950, it was quickly revived by Marvel.

Captain America is the superhero version of Steve Rogers, a young artist transformed to become the peak of human perfection with the use of a super-soldier serum after joining the US Army.

Known for battling Hitler, Captain America was eventually encased in ice and unthawed to join the Avengers in the modern age of crime fighting.

Today, Captain America is one of the top comic book heroes of all time, with various shows, movies, and stories connected to his identity.

As mentioned above, Captain America doesn’t have a logo in the traditional sense, but there is a consistent image used to represent the character in various movies and storylines. The symbol is based on the character’s indestructible shield, which also stands as his primary weapon.

Looking back at the original shield introduced with Captain America in the first editions of the story, the first shield was quite different to the one we know today. Though it still featured the colors of the American flag, the shield was a more traditional triangular shape.

Over the years, as Captain America’s shield changed, it became the ultimate defining element of the character. Various versions of this shield image have appeared in multiple comic books and movies, sometimes featuring either a red or blue outer ring.

The primary elements of the shield have remained more or less consistent throughout the history of the character, however. The image always includes a white star in the middle of a blue circle at the center of the shield.

This star has also rotated into a number of positions through the years.

Alongside his shield, the “Cap” also has a number of other defining elements to his image, including a red, white, and blue uniform with a large white star on the superhero’s chest. In some cases, the outfit for the character also includes a large white “A” on the head of the hero’s outfit.

This is intended to stand for “America”.

The Movie version of the Captain America logo doesn’t include any symbol at all. Instead, the Marvel Cinematic Universe has focused on using large block letters to depict the name of the character, and the title of the movies. Usually, the Marvel symbol is also included.

The symbol on Captain America’s shield is a representation of the American flag, featuring red and white stripes, with a blue center and a single white star. As noted above, the original shield of the superhero was made of a standard metal and triangular in shape.

However, following various comic book adventures, during which Steve Rogers defeated some high-profile Nazi troops, a new version of the shield was introduced. President Franklin Roosevelt awarded the Captain his new shield in the comics, made from a super form of alloy.

Notably, while the visual elements of the shield remain consistent throughout the comic books and movie franchises, there are some slight differences. The major change made by the Cinematic Universe was to the origins of the shield.

According to the movies, the shield was made from Vibranium, one of the toughest metals in the galaxy.

Notably, the movie shield was also given to Captain America by Howard Stark, the father of Tony Stark (Iron Man). In the comic books, Tony Stark also continued to work on Cap’s shield, and create various alternative models.

Ultimately, the Captain America emblem is intended to be a symbol of hope, protection, and patriotism. By choosing a shield as the primary image for the character’s identity, the creators have created a superhero with a focus more on defence and security than violence or aggression.

The colors of the shield, combined with the patriotic outfit used by Captain America create a fantastic symbol for patriotic Americans. Everything about Captain America is intended to highlight the strength and capability of the USA.

You can find some excellent Captain America resources here:

What color is the Captain America logo?

The colors of the Captain America shield are red, white, and blue, the iconic shades of the American flag. While various different forms of these colors have appeared throughout the years, they’re always a strong part of the Cap’s image.

Some colors from the original Captain America logo color scheme include:

What font is the Captain America logo?

The choice of typography for this logo is a clear insight into the strength and durability of the character, which has withstood decades of evolution in the comic book space.

Though the Captain America symbol may not be quite the same as a traditional logo, it still evokes significant emotion and meaning, like many of the most popular emblems of all time.

You can learn more about some of the most memorable logos in superhero history elsewhere on the Fabrik Logofile.