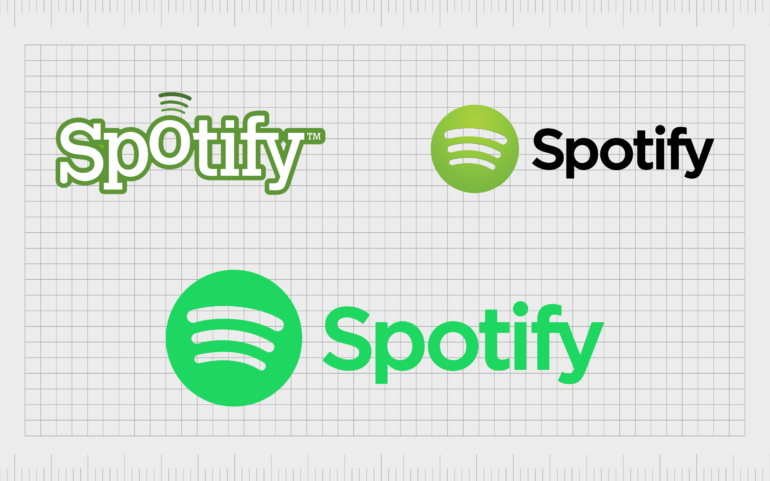 The Spotify logo is one of the best-known symbols of the digital era. Present on countless smartphones tablets, and computer systems today, the Spotify symbol acts as a gateway to endless music and entertainment options. The question is, where did the Spotify music logo come from?

Today, Spotify stands as one of the largest streaming providers in the world, competing with the likes of Pandora and Apple Music. Millions of people use Spotify’s service to create custom playlists and find songs from their favorite artists. The simple, green logo is almost a symbol of musical freedom.

Today, we’re going to give you a behind-the-scenes look at the Spotify Music story, and the decisions responsible for creating the Original Spotify logo.

The history of Spotify music: Dawn of the first Spotify logo

The Spotify company began on the 23rd of April 2006, a full 15 years ago at the time of writing. Launched in Stockholm, Sweden, by Martin Lorentzon and Daniel Ek, the platform has quickly become one of the world’s largest streaming service providers.

The Spotify founders launched the company to provide digital consumers with an easy way to find, sort, and organize songs they wanted to listen to. The company already earned its first million subscribers by 2011 and has since skyrocketed to fame.

Following around two years of development from the founders, the original Spotify logo appeared in 2008. This image was a little different to the Spotify emblem we know today, though the foundational color (green) was already in use. Let’s look at how the Spotify logo design has changed over the years.

The first Spotify logo launched in 2008, two years after the company was originally founded. The style was similar to many tech-forward companies launching in the late 2000s, like Airbnb and Uber – using fun fonts and minimalistic elements.

The old Spotify logo included the name of the company in a white serif font, outlined in dark green and placed on an avocado-color background.

The “o” in the Spotify wordmark was more pronounced in this logo, jumping away from the rest of the letting. There’s also a series of three curved stripes above the letter “o”, representing sound waves, or connectivity (similar to a broadband icon).

In 2013, the Spotify icon had its first major overhaul. The trademark was entirely redesigned, removing both the rectangle of green background, and the funky “o” in the wordmark.

During 2013, many companies were modernizing their logos by making them sleeker and more simplified. This is something we can see in the Spotify design.

The wordmark changed to a simple sans-serif affair in thick black font, placed next to the Spotify icon, a series of three curved white lines in a green circle. The lines once again represented the synergy between internet connectivity and music in the Spotify business model.

Only 2 years after the recent rebrand, the Spotify symbol changed again, this time taking on a brighter aesthetic. The Neon Spotify logo, as it’s sometimes called, transformed the fundamental color of the Spotify brand from a natural avocado green to something much brighter.

The decision to change colors seemed like a natural one for the company. Originally, Spotify’s choice of shades was more connected to nature than technology. Other elements of the Spotify logo aesthetic remained the same.

The lines in the circle were still white, and the accompanying font is still sans-serif, though this time in a matching neon green.

The decision to alter the Spotify logo aesthetic in 2015 should have been a simple one. However, the community weren’t overly happy about the change in colors. Many customers on social media complained about the appearance of the Spotify icon on their smartphone.

Despite heated controversy among users, Spotify maintained its new emblem, explaining it wanted a more simplified version of the previous design, with just two colors. The Spotify neon logo is still in use today, and most people have stopped complaining about the color.

However, you may still find customers asking about the “Crooked Spotify logo”.

Why is the Spotify logo tilted?

A close evaluation of the Spotify symbol shows the lines within the circle emblem are slightly tilted to the right. There are various answers to why the company chose this design aesthetic.

Other experts say the crooked Spotify logo tilts slightly towards the right to demonstrate the forward-moving nature of the company and the musical industry.

The Spotify emblem today is an easy-to-recognize design, fantastic for a digital-first company. Although Spotify does have its own wordmark, the graphic device frequently appears without the typography to make it more compact.

The circle with the three central curved lines is the most common Spotify logo.

You can find some handy Spotify logo resources here:

Spotify’s logo is effective because it’s simple, memorable, and eye-catching. Everything from the unique green of the Spotify logo to the choice of font is deliberately engaging.

Here are some of the elements of the Spotify music logo you need to know:

What color is the Spotify music logo?

The Spotify logo color has been a source of controversy over the years. Originally, the Spotify green was a soft avocado shade, often associated with nature and growth. The Neon green Spotify logo appeared in 2015, much to the dismay of many customers.

Shapes in the Spotify logo

Though the original Spotify logo had a rectangle behind the name, the recognizable shape today is a circle, with three curved lines in the middle. The curved lines are intended to represent sound waves or connectivity, while the circle is a universal sign of community and inclusion.

What font does the Spotify logo use?

The Spotify logo font is a custom version of the Gotham font, a simple sans-serif font with lots of straight lines and easy legibility. The company did start with a serif font, but quickly changed to a friendlier sans-serif alternative, like many tech companies through the years.

Notably, it is possible to find a black and white Spotify logo variant in some parts of the web. The black Spotify logo isn’t nearly as common as the green alternative however. Spotify recommends using the green logo as the official color of the brand icon.

Depending on who you ask, the meaning of the Spotify logo can vary.

The decision to curve the lines slightly towards the right may be a deliberate one, showing the forward-thinking nature of the company.

The use of a circle is a common one in digital companies looking to create a sense of community. Circles convey connectedness and inclusivity – which are values Spotify holds dear.

The circle can also represent the world, which highlights the company’s global reach and ability to access so many different kinds of music.

The decision to use green as a central color can mean Spotify wanted a connection with ideas of growth, and creativity – though green wasn’t commonly associated with technology companies before Spotify launched.

Green can also represent nature, so this may be why Spotify chose a more “unnatural” green for later versions of the logo, to separate itself from this meaning.

Today, the Spotify logo is a symbol of connectivity, community, and musical appreciation. The design is wonderfully simple and straightforward, with an attractive color scheme (though some may find it a little bright), and a depth of meaning behind it.

Spotify’s logo is an excellent example of how simple shapes can convey a great deal of meaning in a logo design. The backlash when the company decided to change its logo is also an insight into how easy it is to incite unhappiness from a community when they’re not open to change.

If you’re planning on designing a new logo, maybe you should check how your audience feels first?