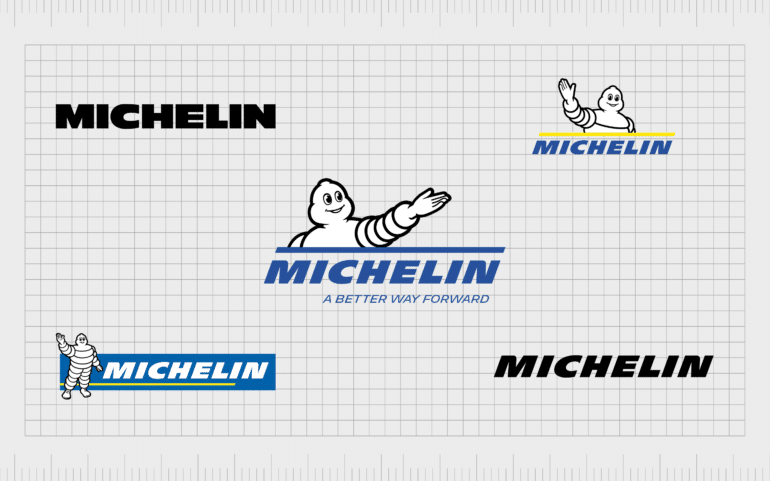 What does the BMW logo mean?

You don’t have to be a car enthusiast or mechanic to know the iconic Michelin logo. Best known for the unforgettable Michelin man logo, or the “tire logo marshmallow man”, Michelin has one of the best mascots in the industry.

However, many people don’t know where the image came from.

The Michelin tires logo has changed a few times over the years, but elements of the company’s image have remained consistent for several decades. The Michelin man first appeared in the 1930s, back when the tire manufacturing company first began.

Today, we’ll be taking a closer look at the Michelin man logo history, and where this unique visual originally began. If you’re ready, let’s get started…

Michelin is a French tyre manufacturer with a multi-national audience. The company was founded more than 100 years ago, in 1889, and still has a resounding impact on the automotive world today.

More than just the “logo with the tire man”, the Michelin man logo has quickly evolved into an unforgettable image in the branding world. The design of the Michelin tire company’s logo has changed over the years to suit the evolving company, but many elements have remained the same.

Originally, Michelin didn’t have much of a real logo to its name. The original idea for the Michelin man didn’t come to the founding brothers until 1894, when they were visiting a Lyon colonial exposition, and Edouard noticed a stack of tires looked a lot like an armless man.

Even then, it would be another four years before an interaction with the French cartoonist, O’Galop would bring the Bibendum to life.

Since the introduction of the Michelin man, the Bibendum has gained attention around the world. Today, the character is one of the best-known in the modern marketplace.

If you’re wondering why the Michelin man’s body is white when it’s supposed to be made of tires (which are usually black), you’re not alone. Questions to this effect have revealed tires actually used to be white before 1912 in many parts of the world.

It wasn’t until the early 1900s manufacturers started adding preservatives to the rubber to make it black.

Here are some helpful resources if you’re looking for a Michelin man logo vector, download, or icon.

What is the Michelin man’s name?

The original version of the Michelin man was created by a French Cartoonist called O’Galop.

The cartoonist showed the founders of Michelin, Andre and Edouard Michelin a rejected design he had created for a brewery and suggested replacing him with a man made of tires.

The actual name of the Michelin man

The Michelin man name is actually Bibendum, taken from the phrase, “Nunc Est Bibendum” from the original brewery cartoon design. Often referred to as “Bib”, the iconic character became a significant part of Michelin’s identity from day one.

Though his shape has changed somewhat over the years, and the character has been depicted in a range of scenarios, he still remains essential to Michelin’s image.

Perhaps the first, most iconic example of the Michelin man logo in action is the design from 1936 to 1968, featuring the Michelin man running with a tyre over his arm. Above the waving mascot is the wordmark “Michelin”, written in cursive with a streak extending from the end of the “N” to represent a road.

The old Michelin man: Evolution of the Michelin tire mascot

The original Michelin man was much chunkier than the one most people know today. Often, he would be depicted waving at his audience, and would either stand in place, or appear to “run” through the logo.

For a time, between 1968 and 1997, Michelin considered abandoning the Michelin man image entirely in the search for a more modern appearance.

The 1968 design changed the Michelin logotype to a solid, modern one, with all capital sans-serif letters. This extra-bold typeface highlighted the stability of the company, but it failed to show the fun and playful nature of the brand.

Though Bibendum still showed up in some of the company’s branding and marketing campaigns, he wasn’t always in the logo itself.

During 1997, the Michelin branding team decided to revive Bibendum again, while simultaneously introducing new colors to bring the image to life. The white, blue, and yellow color palette appeared for the first time, giving the company a more friendly, and reliable image.

The blue background behind the “Michelin” wordmark represented stability and loyalty.

The yellow underline, finishing just before the “N” underneath the Michelin logotype indicated joy and playfulness. At the same time, this line also drew the mind back to the previous versions of the Michelin logo, which included the road extending from the “N”.

Michelin has maintained its new color scheme and font choice since the arrival of the 1997 logo. The image did change again in 2017. Though all of the elements from the old 1997 logo remain in this image, the Michelin man is a lot larger, appearing to stand behind the wordmark.

We only see the top half of the Michelin man here, positioned above a yellow line, and the word “Michelin” in the bold sans-serif font.

This version of the 2017 logo still appears in some of Michelin’s branding, but the company recently updated its image again, this time removing the yellow line completely. The colors of the Michelin man logo are now white, black, and blue.

In this new logo, the Bibendum is still only half a figure, positioned above a blue line this time, next to the word Michelin.

The use of a sans-serif font remains in this new logo, accompanied by a slimmer version of the wordmark. This font now shows the slogan of the Michelin brand “A Better Way Forward”. To enhance the image of a “forward-thinking” brand, Michelin has also changed the position of the Michelin man.

Rather than waving like he does in many previous iterations of the Michelin tires logo, the Michelin man is gesturing slightly upwards, appearing to direct viewers towards a brighter future, and the Michelin name.

An iconic symbol in the automotive world and an unforgettable insight into the power of mascots in logo design, the Michelin man logo is one of the best in the world. Over the years, various redesigns have helped to revive and enhance the image of the Michelin logo.

Here are the factors you need to be aware of today:

The enduring symbol of the Michelin tires logo is the Michelin man, or Bibendum. The character has gained attention worldwide as a mascot for the tire company. The company has used this creation in almost every marketing asset for the last 100 years.

The answer to “What color is the Michelin logo today?” is blue, white, and black. The logo has seen various iterations over the years. Some people still recognize the logo with the yellow stripe.

If you type “What font is the Michelin logo?” into Google you won’t get a consistent answer. This unique font is specific to the brand, but we do know it’s a slightly italic sans-serif typeface. All of the letters in the name are capitals.

If you’d like to learn more about some of the most iconic logos in the world today, make sure you check out our other recent posts on Logofile.

Fabrik: A branding agency for our times