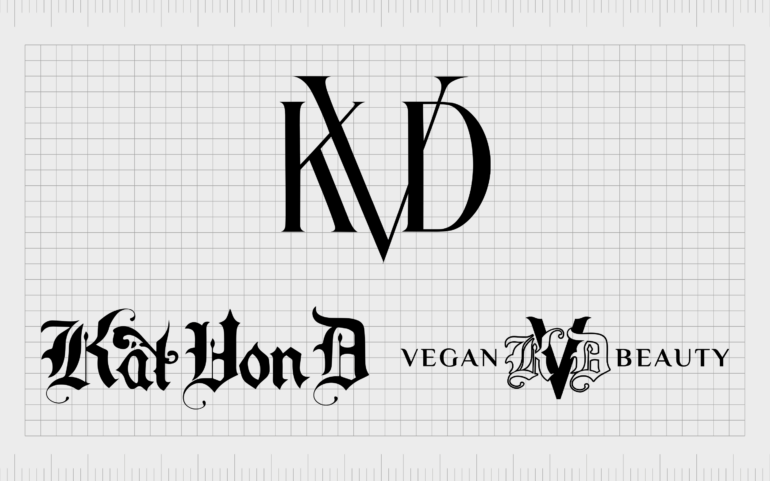 The Kat Von D logo, now the KVD logo, is one of the more controversial images in the beauty and cosmetics industry, thanks to the complex story of the company’s founder.

Today, the KVD company, with its new identity, is making a comeback with a wide selection of popular products, many of which are based on previously sold items.

Today, we’ll dive into the Kat Von D background story to learn more about the company’s origins and how it eventually transformed into KVD.

The Kat Von D beauty brand was first launched in 2008 by Mexican-American tattoo artist, entrepreneur, and model, Katherine Von Drachenberg. The company took a grungy, edgy approach to the cosmetics industry, which helped it to stand out among other high-end brands at the time.

Kat Von D added her own unique alternative flair to the products she created, the packaging, and the Kat Von D logo, which was written in a gothic-style font.

Though the beauty company achieved significant acclaim and popularity over the years, it was also the source of various controversies, which many people believe pushed Kat Von D to eventually step down as the CEO of the company and sell her remaining shares to the Kendo organization.

The official story of why Kat Von D left the company is she no longer had time to manage the brand as she pursued new artistic interests, such as launching a vegan shoe line and recording her recent debut album.

Following the release of her baby boy, Von D told the press she could no longer balance all of her endeavors and decided it was time to put her makeup line to rest.

Some former fans believe Kat decided to leave her beauty brand after being a part of too many scandals associated with the brand.

Over the years, Von D received a lot of backlash for giving lipsticks offensive and controversial names in her product line, which eventually caused several influencers to boycott her brand.

Von D’s fans also turned against her after a major fight with Jeffree Star in 2016 when she announced she wouldn’t vaccinate her unborn child.

What does KVD stand for? The KVD rebrand

When Kat Von D left her beauty brand behind, she sold the remaining shares she held in the company to one of its major investors. Kendo, the beauty incubator responsible for Bite Beauty and Marc Jacobs Beauty, became the sole owner of the new “KVD Vegan Beauty” line in 2020.

Soon after Kat Von D left the company behind, the brand went through a relatively rocky period as it tried to reform its image after various controversies. Many people continued associating “KVD” with Kat Von D, particularly as the brand image was still quite similar.

KVD Vegan Beauty took to Instagram to announce their name actually stands for “Kindness, Vegan Beauty, and Discovery. Since then, the company has also suggested the name “Kara, Veritas, Decora,” which means “Value, Truth, and Beauty.”

KVD Beauty is still up and running today, but the “Kat Von D” beauty brand is discontinued.

KVD Beauty is still owned by Kendo Brands, who took over all of the shares Kat Von D had remaining in her makeup brand when she decided to leave.

The Kat Von D logo remained relatively consistent throughout the time the company spent under the management of Kat Von D herself. However, when the company evolved to become the “KVD” organization, the branding changed twice quickly.

As the Kat Von D beauty brand, the company retained a simple, gothic-style wordmark logo, written in a bold black font, with diamonds on either side. The design was intended to look alternative and elegant, highlighting the edgy style of the beauty brand and its unique approach to cosmetics.

The typeface was a custom-designed font by Kat Von D herself and appeared on various branding and marketing associated with the organization.

When Kat Von D sold her shares in her makeup brand to the Kendo company, the organization became the “KVD” line and changed its branding accordingly. This design maintained the same style of “K” and “D” from the previous font, combined with a modern, elegant style, “V.”

The new version of the logo also included the words “Vegan Beauty” to highlight the company’s commitment to using all-vegan products.

Following significant confusion from the public about the KVD brand, the company decided to change its logo again.

With the previous image, many customers still assumed Kat Von D was associated with the makeup venture. This meant many unhappy former fans continued to boycott the new business.

To remove their connection with the tattoo artist, KVD changed the font and design of their logo entirely to a bold, serif typeface. The design overlaps the “V” on top of the letters “K” and “D” to perhaps draw attention to the “Vegan” element of the cosmetics.

However, the “Vegan Beauty” words have disappeared.”

Since parting ways with Kat Von D, KVD has been building a new image in the cosmetics industry. Although initially, it seemed the organization was attempting to preserve some of its connection to the tattoo artist, it quickly decided to go in a different direction with a new logo.

Today, the KVD brand is much closer in style to several other high-end beauty brands across the cosmetics landscape. The sleek and stylish serif font conveys the elegant nature of the company, while the sharp and bold elements retain a slight edge.

Here are some resources you can use to compare the logo styles:

What color is the Kat Von D logo?

The Kat Von D colors and the KVD logo colors today are the same – an elegant black and white. The official Kat Von D logo color was black, placed on a range of different packaging and product designs.

The black coloring is still event in the KVD logo today, though variations of the design have been created in different colors for marketing purposes.

What font does the Kat Von D logo use?

The original Kat Von D logo was designed with a gothic-style font created by Kat Von D herself. The current KVD logo uses a simple serif font, similar to Times New Roman, with unique elements added to it (such as a larger “V” shape).

The letters have also been arranged to look like they’re overlapping, creating a more compact and modern design.

The Kat Von D logo may no longer exist in the cosmetics landscape, but it formed the foundation of a brand-new company. The KVD rebrand has been a rocky and controversial experience for the Kat Von D company. However, the organization is starting to find its footing.

Today, the KVD logo is leaving the imagery of the Kat Von D logo behind once and for all, replacing the gothic-style font with something sleek and sophisticated.

It will be interesting to see whether the packaging and style of the products produced by the company will continue to evolve to suit the new brand personality in the years ahead.