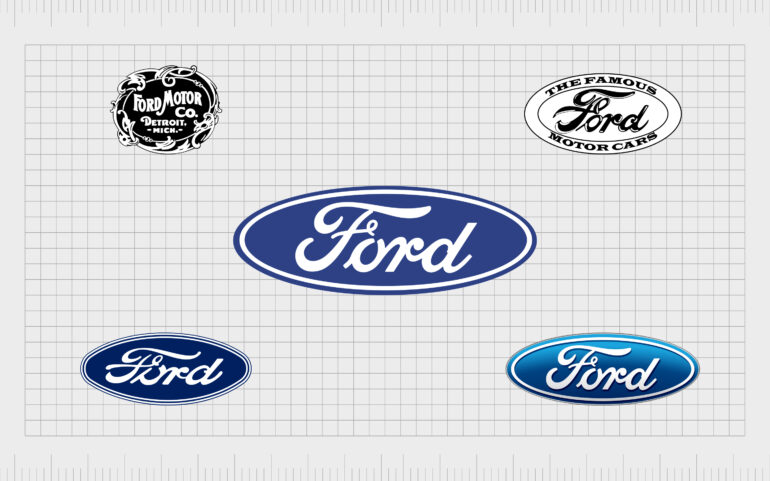 The Ford symbol meaning and logo through the years.

The Ford logo history goes back more than a century, to the date when the Company was first established in 1903. The simple wordmark might not seem like much, but it’s an incredible example of the power a minimalist emblem can offer.

Easily recognizable and effective, the Ford logo has maintained a lot of the same elements over the years. Born from the signature of the founder himself, the Ford logo appears on countless vehicles around the globe.

Today, we’re going to give you a behind-the-scenes tour of Ford logo history, with insights into Ford logos over the years, and how the Ford logo design has changed.

No insight into Ford logo history would be complete without a look at the Ford symbol as it stands today. The current Ford emblem is a flat oval designed to feature several shades of blue and white.

According to experts, the typography for the Ford cars logo comes from the handwriting of founder Henry Ford himself.

While the Ford symbol meaning might not be as extensive as some of the other car logos in the world, it still has some symbolism to it. The use of white, for instance, demonstrates elegance, purity, and nobility in color psychology.

The shade blue, on the other hand, has connotations with reliability, trust, and excellence.

The Ford logo emblem belongs to the Ford Motor Company, commonly known as “Ford”. According to the Company, the original design of the Ford symbol and the design in use today both come from the handwritten signature of the Ford founder, Henry Ford.

The Ford Company is best-known for selling automobiles and commercial vehicles around the world. Ford also sells Lincoln brand automobiles and has a stake in the operations of SUV manufacturer, Troller, and the Aston Martin Company.

As of 2019, Ford became the largest American car manufacturer, and the Organization is also one of the largest car companies in the world.

If you glance at the Ford logo through the years, you’ll notice many of the Ford logo changes were quite small after a certain point in the Brand’s history.

The visual history of the Ford Company is somewhat simple. Though initially, the business started with quite a complex emblem, it quickly scaled down to something more simplistic and well-suited to automobiles. 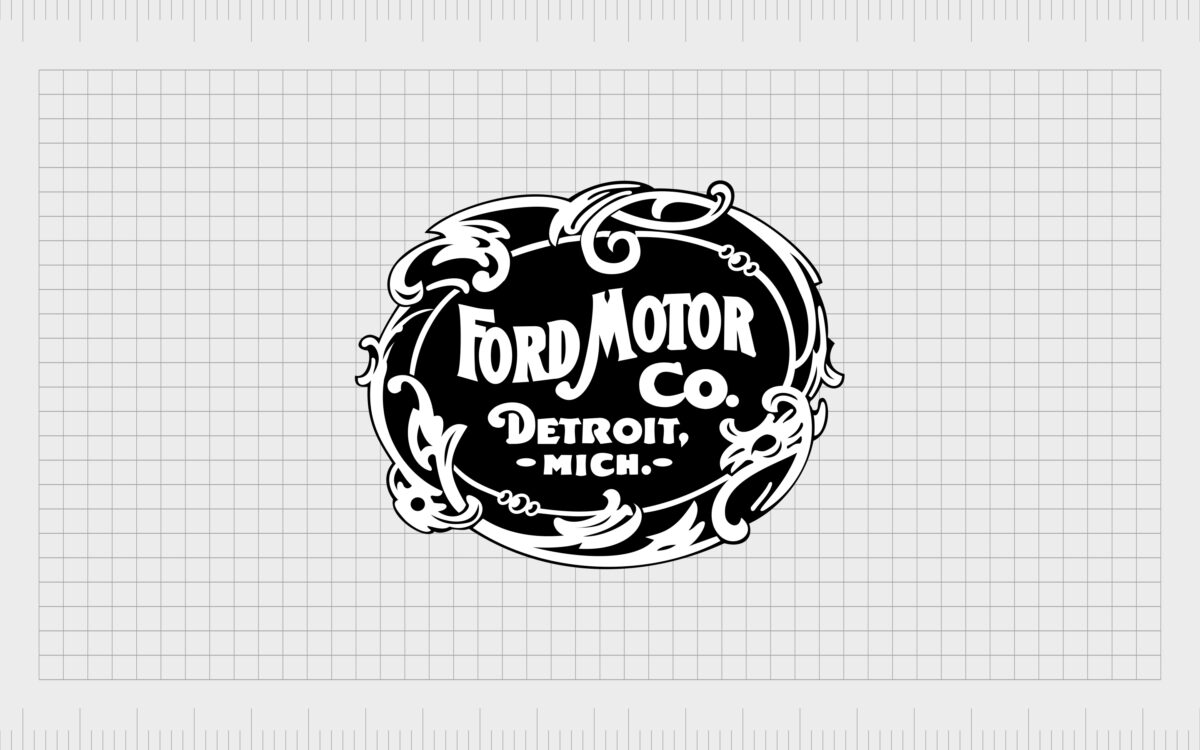 The first of the Ford Motor Company logos was the most complex. This old Ford logo included the words “Ford Motor Co”, as well as “Detroit Mich” to showcase where the brand came from.

Around the words, written in a curvaceous sans-serif font, was an ornate frame of leaves and swirling shapes.

This original Ford logo design often appeared in black, with a white frame and white wording. The letters were also designed to follow a wave of motion, making them seem more like natural handwriting.

Though it appears complex today, the old Ford logo was tasteful, elegant, and normal for the time. 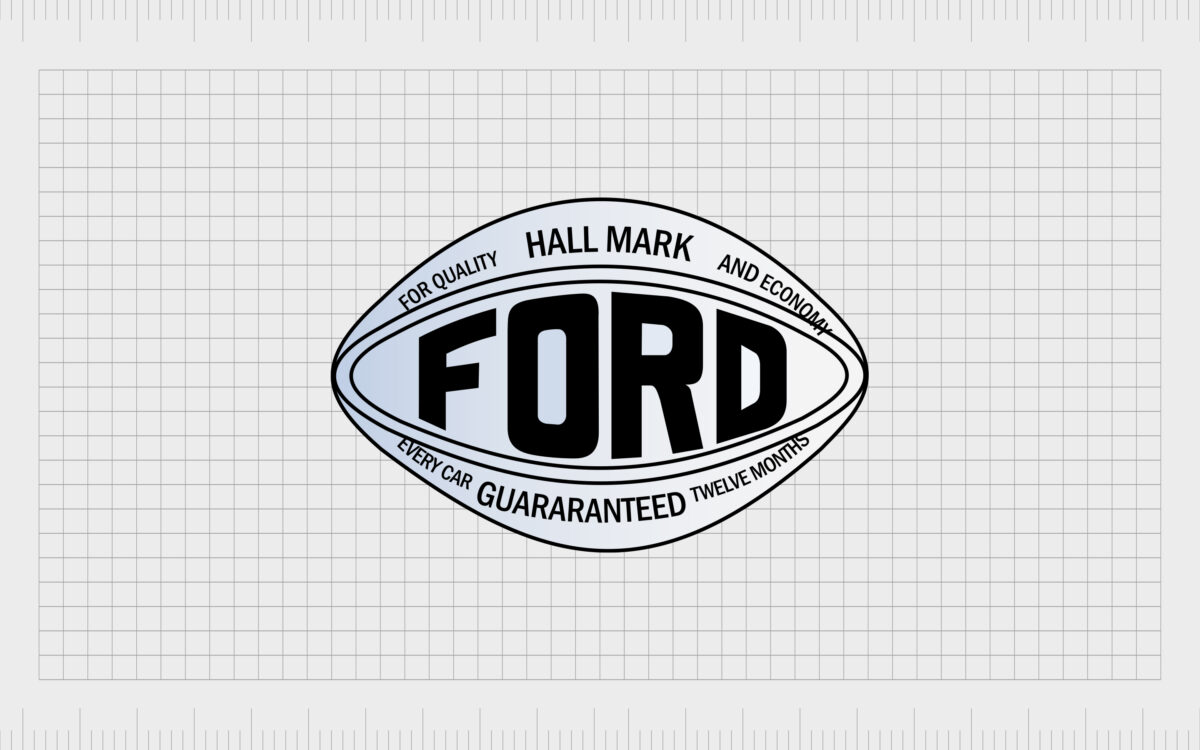 In 1907, we saw the first massively simplified version of the Ford logo design. The flowery border and handwriting-style typography disappeared. Instead, the word “FORD” was placed in all capital, sans-serif letters in the middle of an oval-shaped badge.

The Ford logo font here was much bolder for the name of the Company itself. The Brand also added various terms to demonstrate its trustworthiness, such as “Every car guaranteed twelve months”, and “for quality, hallmark, and economy”.

The words “Hallmark” and “Guaranteed” were larger than the others surrounding the “Ford” name.

The Ford logo colors switched from black and white, to a greyscale ensemble. 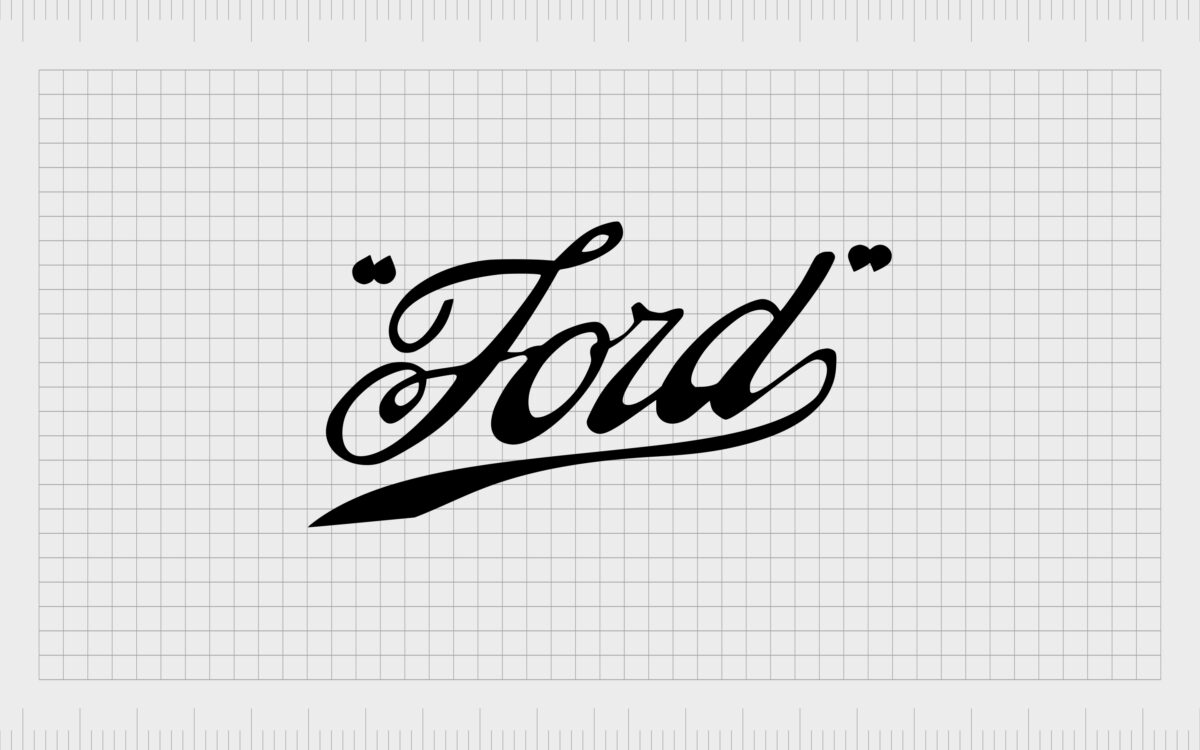 In 1909, the first example of the Ford logo we know today emerged. This wordmark logo featured only the word “Ford” in an imitation of Henry Ford’s handwriting. The script lettering features an elongated “D” similar to the style of the font in “Coca Cola”.

In 1911, the handwriting was altered slightly, to make it bolder and somewhat easier to read. The Company also placed an oval border around the word “Ford” and removed the tail on the D. The oval border read “The Famous” at the top, and “Motor cars” on the bottom in serif font. 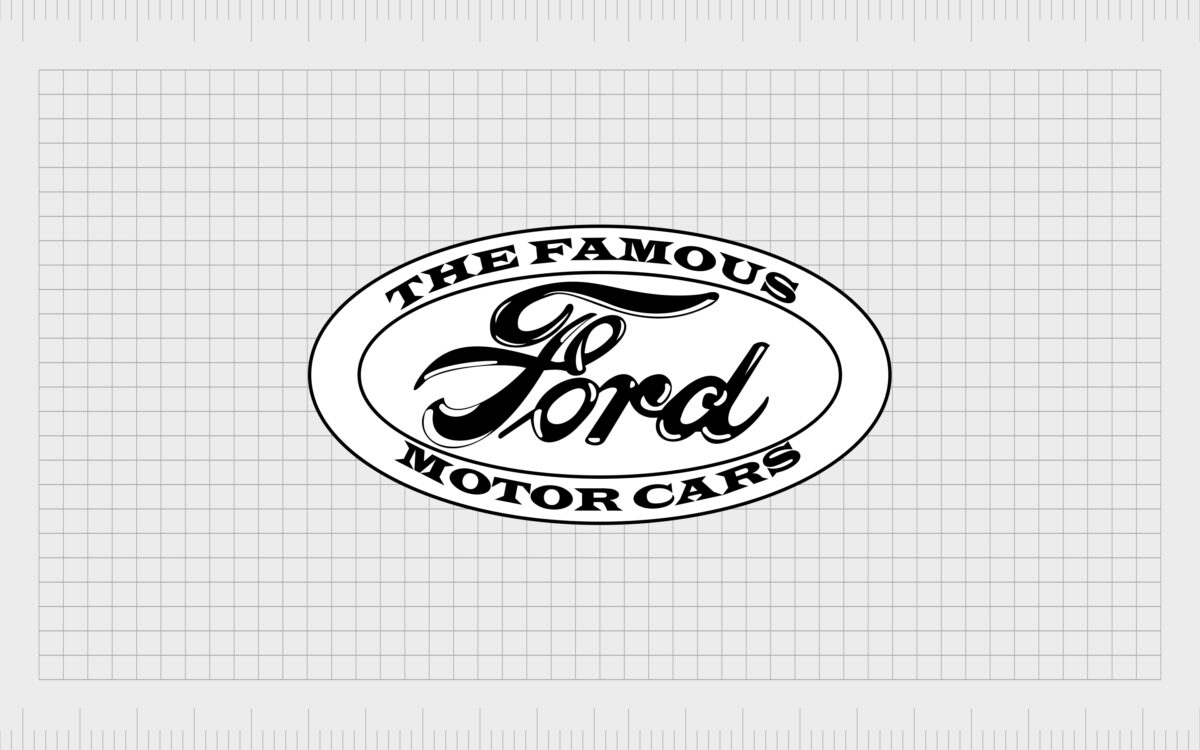 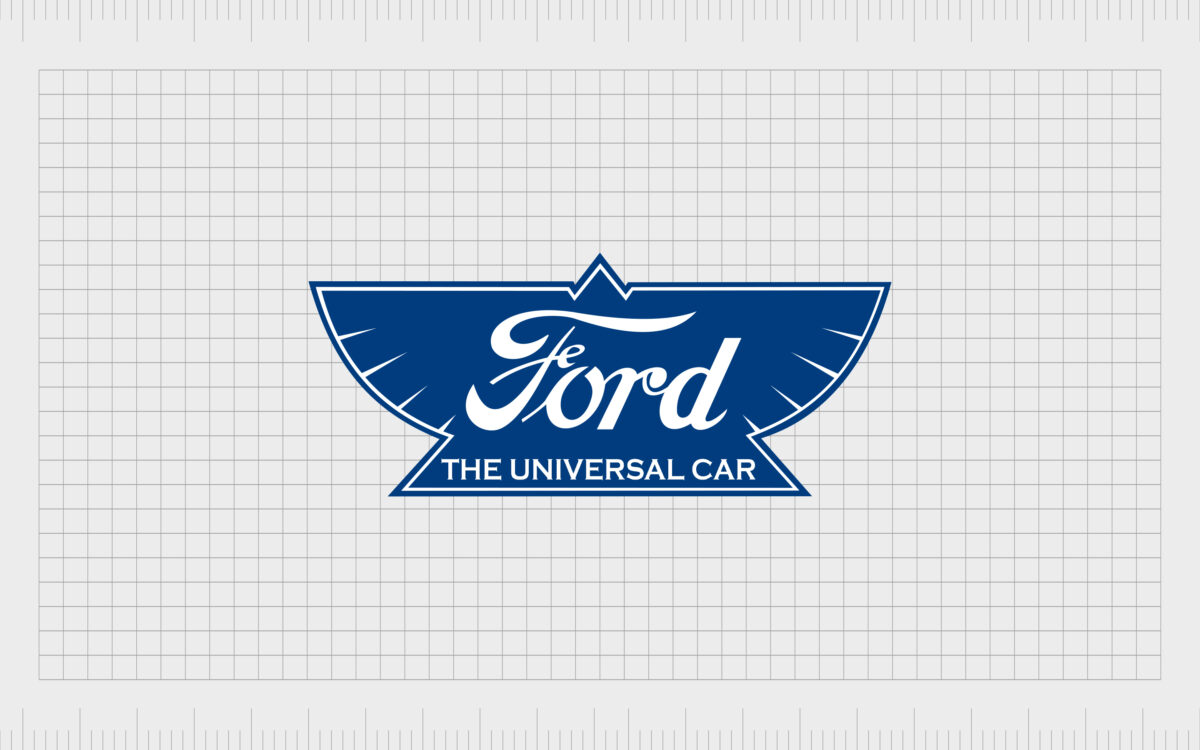 In 1912, the Ford Company decided to try something new, replacing its oval badge with a shape similar to a bird, or wings placed over a triangle. The details are all executed in white here, with a version of the type which is once again easier to read.

For this version of the logo, the bird was designed in blue and white, and the words underneath the logo were changed to “The Universal Car” – a new tagline for the Company. 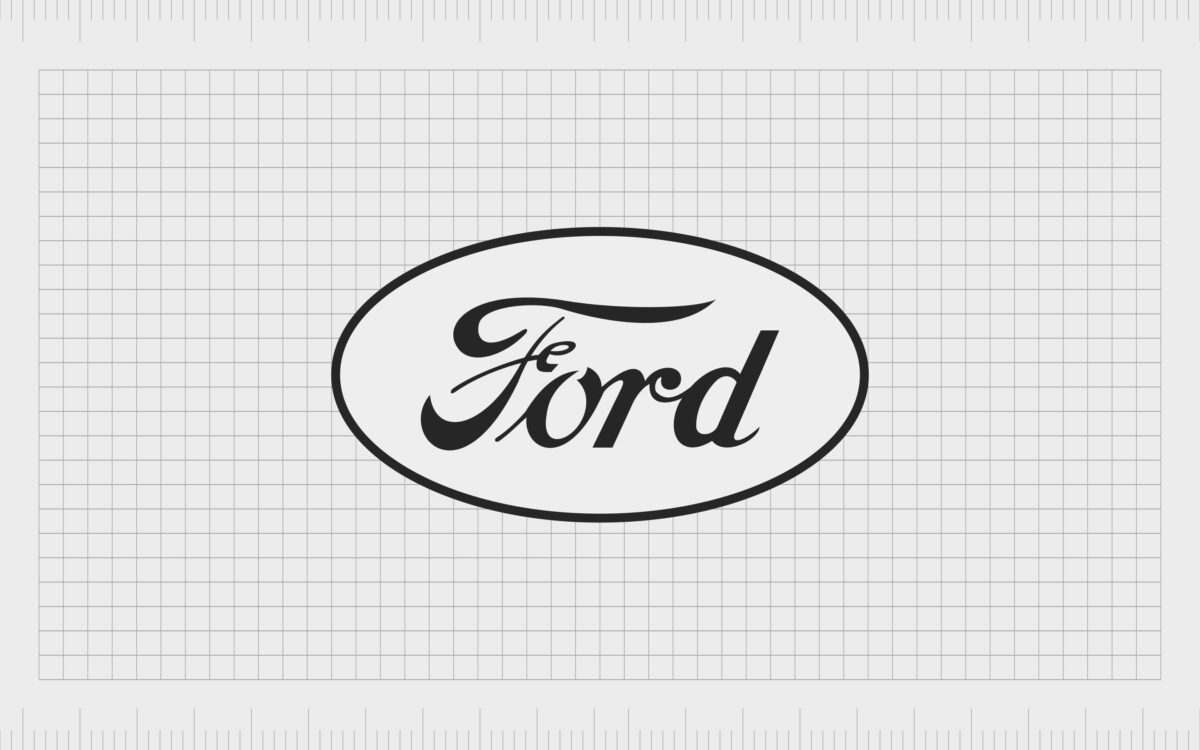 In 1917, Ford switched the bird shape with a simplistic oval again. The shades changed to grey and black, and the “Ford” typograph was written in a much lighter font. The grey oval emblem came with a thin black border, making it appear sophisticated and elegant. 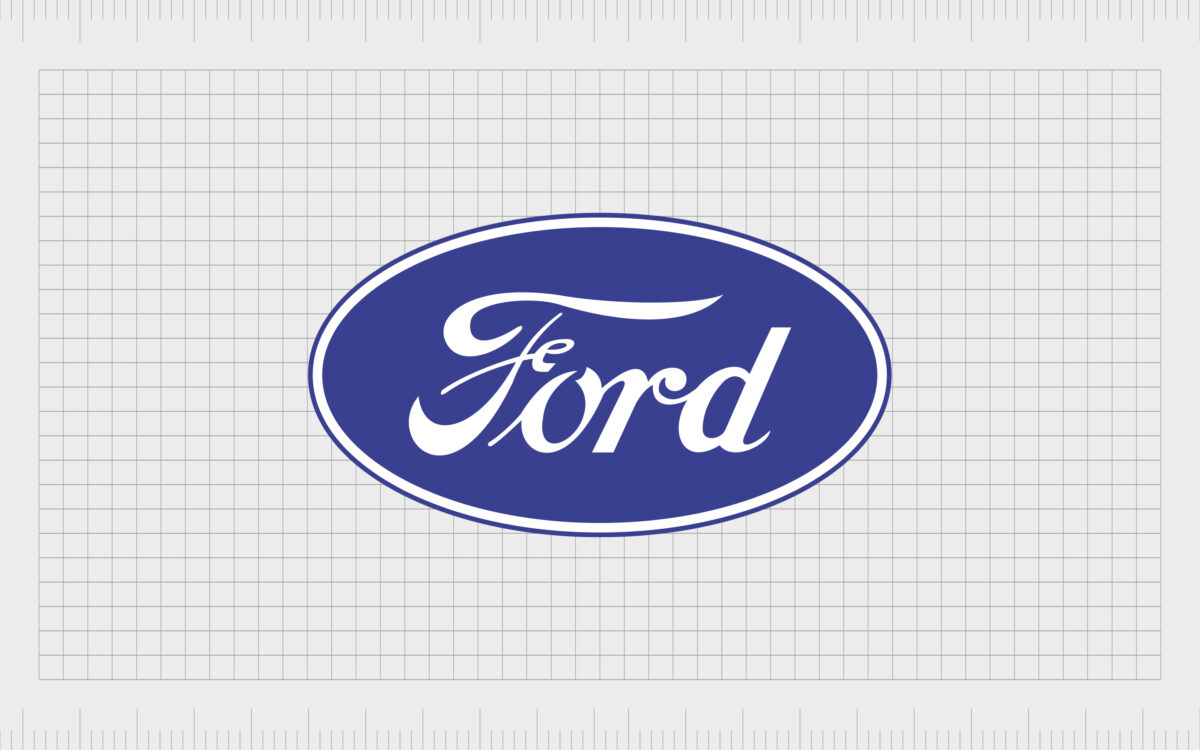 By 1927, the Ford logo encountered another update. This time, the color palette changed to blue and white. The frame doubled, with a thick white line surrounding the main badge, and a thinner deep blue line around that. 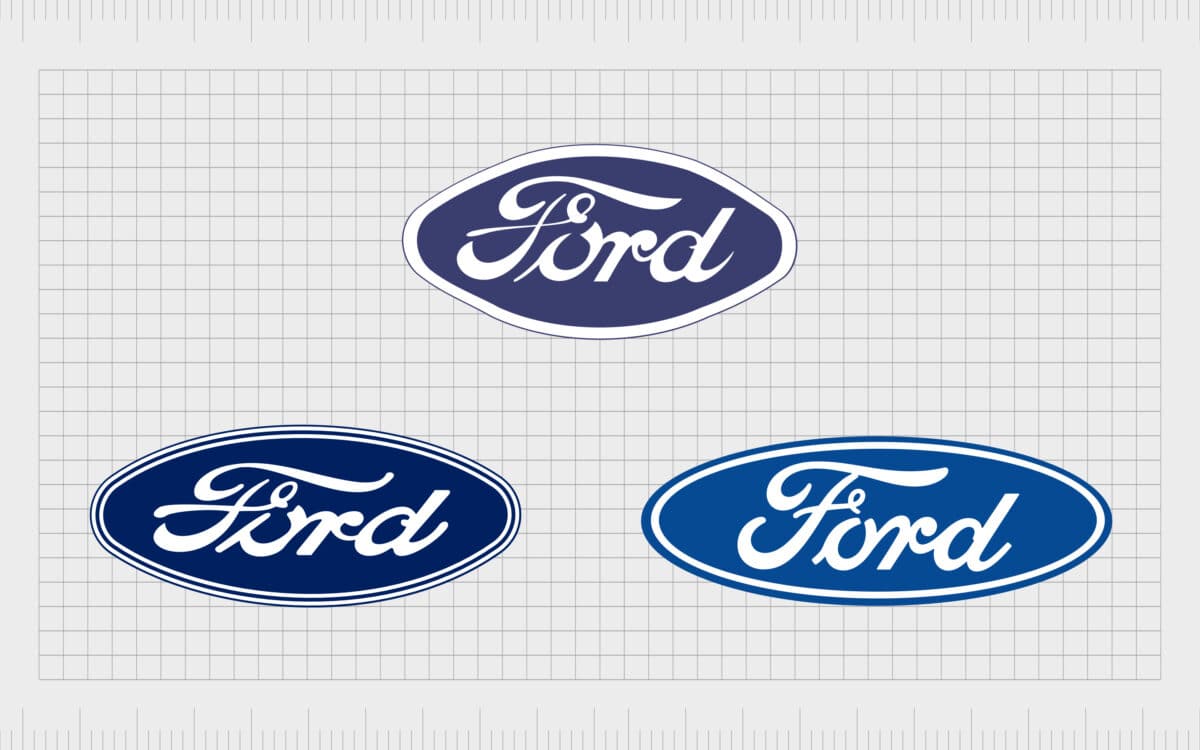 Between 1957 and 1976, the Ford Motor Company experimented with various aspects of the logo, without making any major changes. The typography remained largely the same, though the weight and slanting of the design changed slightly in places.

Ford also tried out different borders for its emblem, altering the shape of the oval, and exploring multi-faceted borders to make the design more iconic. 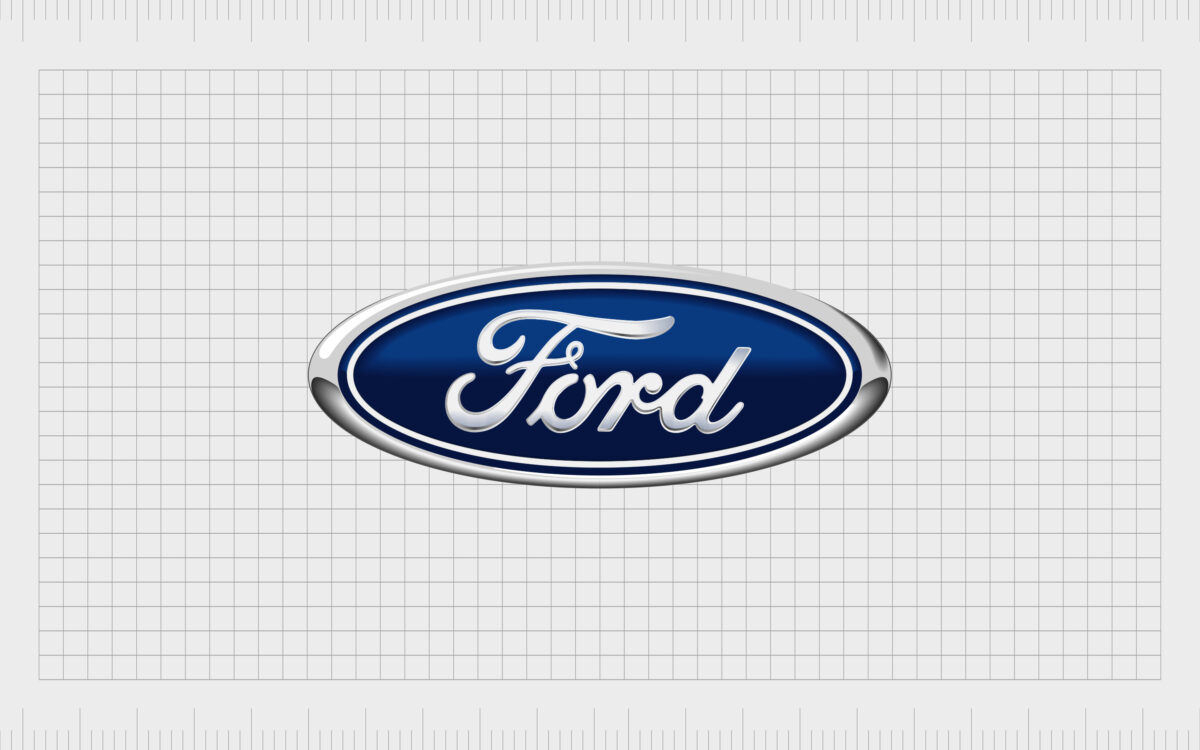 1976 marked the arrival of a Ford logo many people consider familiar today. The three-dimensional Ford badge was born. In this image, the white of the typography, and the surrounding border for the emblem changed to silver.

The blue of the background also took on gradients to make it seem more tactile, like the badge of a vehicle.

For 2003, Ford released a simplified version of the logo without the 3D gradients and shading. This version of the Ford logo is very similar to the one from 1961, but with slightly different dimensions. The contours of the inscription are also far more refined. 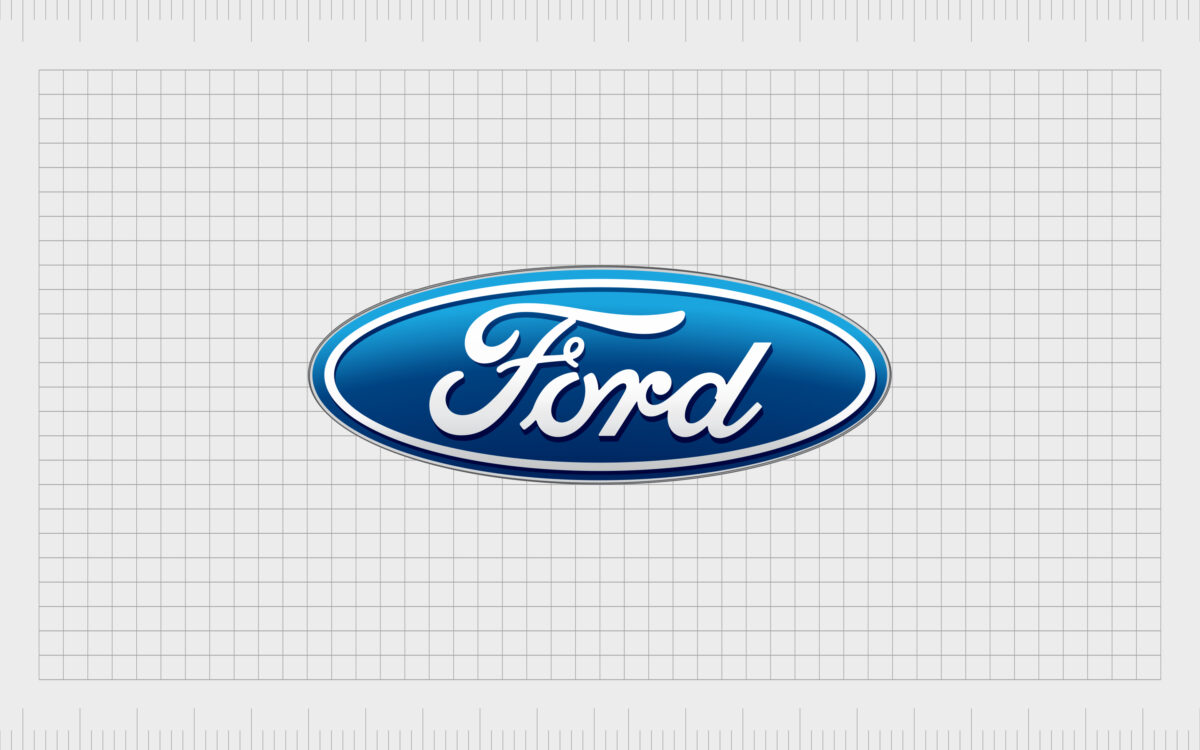 Despite a few Ford logo changes over the years, the design has maintained many of the same elements. The symbol of Ford is simple but effective, displaying the name of a brand in a handwriting-style font on an oval badge background.

The handwritten nature of the Ford logo font helps the brand to appear more human, approachable, and personable. The colors blue and white add to this sense, while creating a classic image for a brand with more than 100 years of heritage.

Though the shape of the Ford emblem changed a little over the years, the oval remains the most common shape chosen by the brand.

The ford logo colors started as black and white, then evolved into greyscale. The best-known Ford color today is blue, which is matched with white or silver for the official Ford logo. The combination of shades is excellent for demonstrating sophistication and credibility.

Ford logo font: What font is the Ford logo?

The Ford logo font is unique because it’s based on the writing of the founder of Ford himself. According to the team behind Ford, the word “Ford” we see on the cars today is a version of Henry Ford’s own signature handwriting.

The style is very classical, with swooping and curving letters designed to remind us of traditional handwriting and calligraphy. Though the actual signature of Henry Ford was a little more complex, the design still stands strong today.

The Ford logo today is one of the best-known in the world.

Currently, Ford stands as one of the largest car brands in the world, as well as perhaps the biggest brand for selling motors in America. Though the Company has had some issues over the years, it’s widely regarded as a go-to name for reputable, reliable cars.