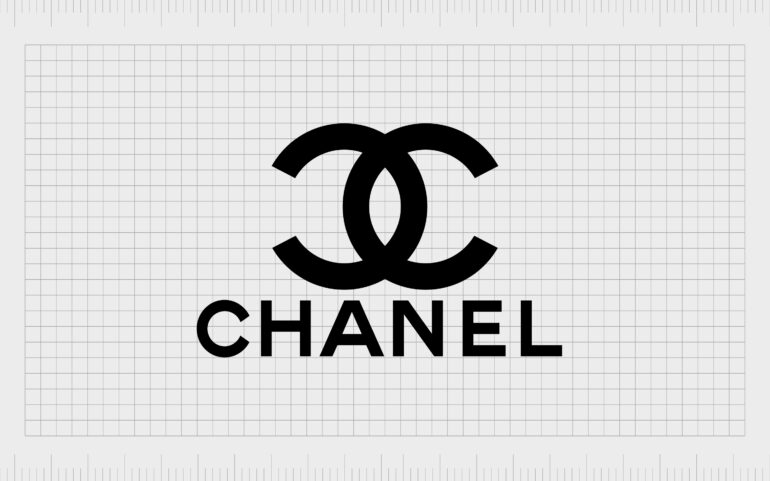 The Chanel symbol and logo history

In this edition of Logofile, we’re going to take a closer look at the history of the Chanel symbol and logo, and explore what makes this Company’s image so effective.

The first thing to note is the two interlocking C’s still feel as relevant and ‘with the times’ as ever, making it hard to believe the image first launched more than 100 years ago. Even today, Chanel still represents luxury at its finest.

It’s not just the emblem for a brand, Chanel’s logo has become one of the most sought-after symbols in the world, with women and men alike all clamouring for their own Chanel piece.

An introduction to Chanel logo design

However, some people argue Coco Chanel wasn’t the first woman to embrace the interlocking C’s as her symbol.

Apparently, Queen Claud of France also used a similar symbol when at the Chateau de Blois, and Catherine De Medici had a similar emblem after marrying into the French family.

While it’s difficult to know exactly where the image began, it’s safe to say Coco Chanel definitely made the interlocking C’s famous.

Long before the Coco Chanel logo became official, the designer was already using it in her designs.

She opened her first store in 1910 and began selling hats. Eventually, the portfolio of clothing options available from Chanel began to grow. Chanel also became famous for creating the iconic “Chanel Number 5” fragrance.

The official story of the fashion house is Chanel designed her famous logo in 1925, after finding inspiration in a stained-glass window from a chapel in Aubazine.

Either way, the interlocking C’s of the official Chanel sign ended up on the brand’s Number 19 perfume bottle in 1925, and the rest is history.

At first glance, the Chanel emblem seems pretty straightforward in its meaning. The Chanel “CC” logo is an excellent tool for representing the first and last name of the iconic designer, Coco Chanel.

The romantic tail of the Chanel logo claims the C’s actually sell for Chanel and Capel, symbolizing the love Coco and “Boy” (Chapel) shared through the years. Others say the C’s were meant to represent two horse shoes to attract attention to the fashion house.

Some even believe the way the Chanel emblem blends the two C’s together is meant to create a pattern similar to a stool.

It’s difficult to know for certain who’s right at this point, as Coco Chanel is no longer around to explain the origins of the Chanel symbol. For the most part, professionals agree the Coco Chanel logo is just a representation of the designer’s name.

It certainly makes a lasting impression, and ensures you’ll have no problem remembering the brand.

The Coco Chanel logotype comes in a variety of forms, depending on the setting. The standard Chanel emblem (the two C’s) is often present on its own throughout a range of Chanel designs. You’ll see it on anything from dresses and sunglasses to bags and purses.

Occasionally, the stylized letters will have a circle around them, helping to make the image stand out from the rest of the page. However, the intertwining letters don’t always need the circle background.

The outline is frequently left out of more modern depictions of the Chanel logo, and appears only for stylistic purposes in marketing.

Occasionally, the Chanel logos you see online will also include the word “Chanel” underneath the Chanel symbol. The perfume Chanel number 5 often comes with just the word on the box, and no symbol, until you see the bottle.

You can find some Chanel logo resources here.

The custom Chanel logotype is said to be a variation on Chanel’s own handwriting. Placed underneath the emblem, the word “Chanel” is set in all capitals, with bold, yet sophisticated lines.

This font is similar to a traditional sans-serif typeface like ITC Blair’s Pro Bold, but with lines modified. The spacing between the letters is also quite broad, creating an air of clean sophistication for the brand.

It’s also common to see the Chanel logo in silver and gold when placed on bags and other accessories.

The official Coco Chanel logo symbol of the interlocking Cs has remained the same for several years now. The logo may have a muddy history at this point, but it remains an effective way to highlight the luxury and elegance of the brand.

The interlocking C’s sitting back-to-back create a unique pattern on their own, while still conveying meaning.

Why is the Chanel symbol so effective?

The Chanel logo might be simple, but it’s also wonderfully impactful. It’s easy to see why the Company has avoided the temptation to rebrand over the years.

Though the Chanel logo design has now been around for more than 100 years, it remains as iconic and memorable today as it’s always been.

The Chanel logo is a celebration of the unique style and vision of the designer behind it. The Chanel logo has never deviated from the core principles of the fashion house, even as owners of the brand have changed over the years.

The symbol is simple and powerful, conveying a sense of practicality, innovation, attractiveness, and quality.

Unlike other brand logos throughout the years, the Chanel logo has managed to maintain a consistent impact and sense of modernity. The image has never needed to be simplified or altered, though the brand occasionally adds the Chanel name and the circle around the interlocking C’s into the mix.

This is a rare thing in the branding world.

For over a hundred years, the Chanel logo has conveyed ideas of sophistication and luxury to people around the world. Today, it continues to define one of the most popular and sought-after brands in the world.

Indeed, the Chanel logo has such a significant impact people will even buy replica products with a version of the logo, just to feel like part of the Chanel community.

The simple yet powerful symbol appears on everything from jewellery to bags and clothing, inspiring confidence in everyone who wears or uses it. After all, who wouldn’t want to be associated with a fashion designer so iconic they managed to remain at the top of the industry for decades?

Now read these:
—Understanding the Nintendo Switch logo
—An in-depth look at the Fortnight logos
—The story of the Pokémon logo symbol
—The old eBay logo to the present day
—Explaining the Van Halen symbol
—The story of the Rolling Stones logo
—History of the Gucci logo and symbol
—Exploring the Stranger Things logo
—Taco Bell logo history and meaning

Draplin Design Co.: Pretty Much Everything
$16.50
Buy on Amazon
Sale