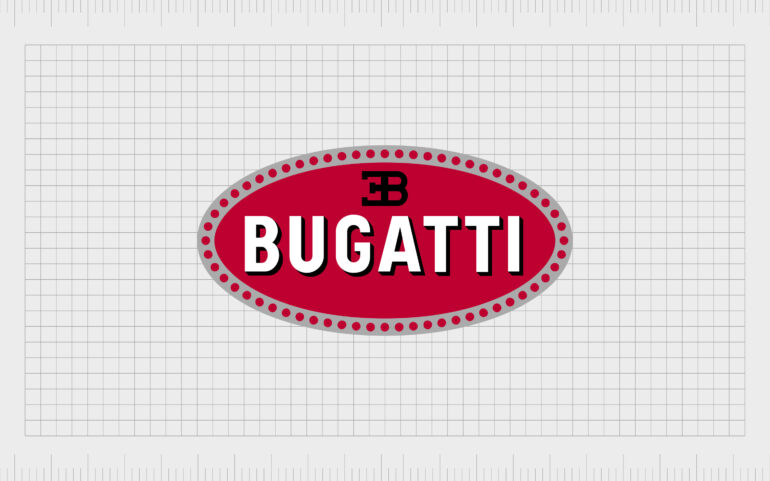 The story of the Bugatti symbol and logo evolution.

Are you up to date with your Bugatti logo history? While the Bugatti logo is easily recognizable around the world, most people don’t know where it came from.

Though somewhat simplistic compared to some other major emblems (like the Alpha Romeo logo), Bugatti’s iconic symbol holds up incredibly well.

Though the company launched over 100 years ago, it’s still using the original logo designed by the father Ettore Bugatti (the founder of the company).

Today, we’re going to take you on a journey into the history and heritage of the Bugatti symbol, and how it continues to be such a valuable piece of logo design history.

There are only a handful of automobile companies on the market now who can say they’ve used the same logo since the brand first began. While Bugatti’s ownership has changed over the years, from Hispano-Suiza in 1963, to Volkswagen in 1998, its brand image remains the same.

The Bugatti logo is a simple, three-colored oval, featuring a red oval, wrapped in a silver border. The silver bordering also features sixty evenly sized red dots. Within the center of the red oval, the word “Bugatti” is carved in 3D-style letters which use black and white for texture.

At the top of the Bugatti badge is the EB trademark of Ettore Bugatti, the man who started the company.

Notably, this is the only Bugatti logo used by the brand since its inception in 1909. The design was apparently created by Ettore’s father, Carlo, who was a famous artist and jewelry designer at the time of the brand’s launch.

It’s easy to see the jewelry-making heritage in this icon, which appears to be studded with a series of precious gems.

The Bugatti logo history starts in 1909, when an Italian-born automobile designer founded his new company in a city which was originally in Germany but is now a commune in France. Almost immediately, Bugatti logos earned a reputation for their amazing design and racing prowess.

Unfortunately, when Bugatti died in 1947, his son had already passed in 1939, leaving no heir to the company. The brand ceased production for several decades, until another entrepreneur revived the brand in the 1990s. Today, Bugatti is a manufacture of luxury performance vehicles, known for producing limited-run and one-off models.

Though the Bugatti family is no longer involved with the company, the consistent Bugatti logo, designed by Carlo Bugatti in 1909, helps to maintain the connection.

Since the Bugatti logo hasn’t changed from the day it was first created, we can’t go through the year-by-year alterations made by the brand, as we would with other logos.

The Bugatti symbol has remained a testament to the heritage and history of the company, allowing the Bugatti family to stay deeply connected with the business, even decades after it ceased to exist.

When the Bugatti logo was first designed, it seemed a natural choice for the emblem of a car created by a jewelry maker’s son. The choice of rich colors like silver and red naturally exude luxury, while the studded border on the oval looks almost like rubies in silver. 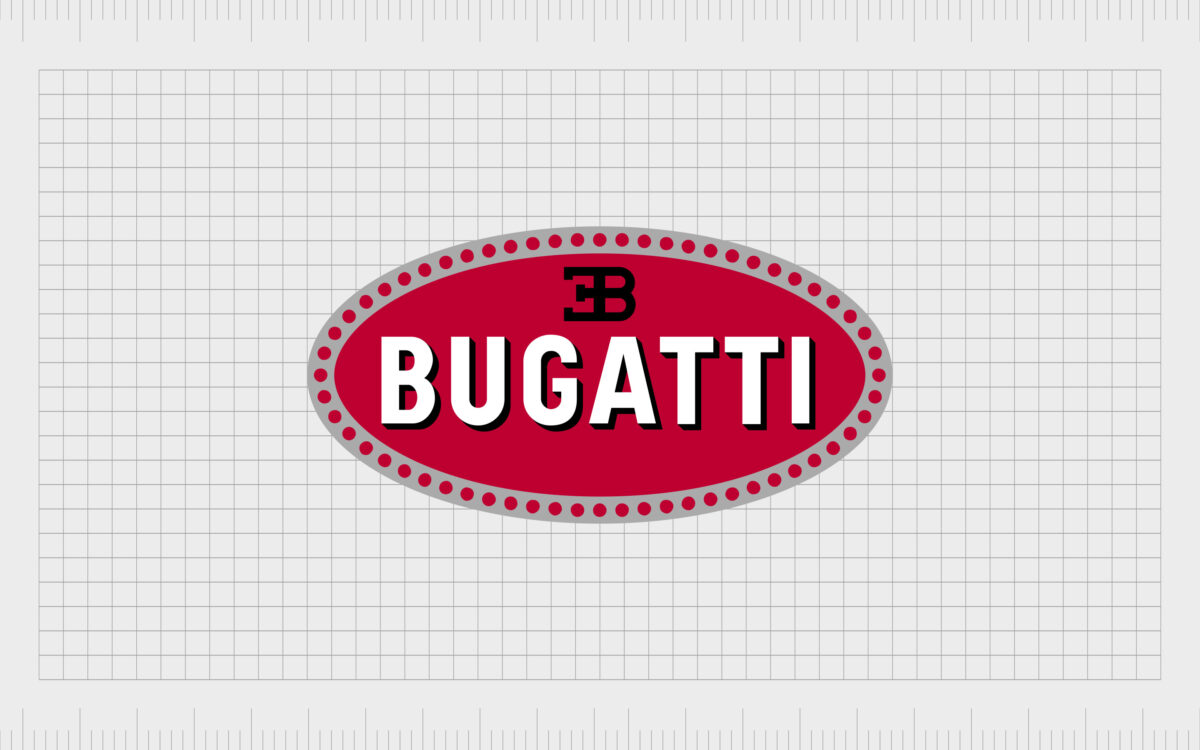 The most important elements of the Bugatti logo as we know it today are:

The meaning of the Bugatti logo in relation to these red dots faces a lot of speculation, but many people say they represent safety wires, which appeared in lace patterns on early Bugatti models.

Others say the dots are gems, symbolizing Ettore’s love of his vehicles, which he saw as “fine jewels”.

The stylistic EB emblem on the top of the Bugatti wordmark symbolizes Ettore Bugatti, founder of the company. The backwards E blending with the B creates a beautifully eye-catching new shape.

The decision to use the color red as the primary one for Bugatti was a deliberate one. According to many of the experts in the company’s branding departments over the years, the red is meant to symbolize passion and power.

Since no living relative of the Bugatti family remains today, it’s difficult to provide a Bugatti logo meaning with any true certainty. To do that, we’d need to find a way to speak to Carlo Bugatti and learn what he was imagining when he first made his mark on Bugatti history.

Although Bugatti didn’t start life making luxury one-off vehicles, Ettore always had a passion for creating incredible sports cars. When the vehicle brand raced into the market, it was with high-performance vehicles – not the standard cars you’d see just anyone driving.

Perhaps this is why Carlo Bugatti chose such a refined look for the Bugatti logo.

Looking at the logo today, it seems almost like a beacon of opulence, in rich shades of red and silver. The dots surrounding the Bugatti red oval could definitely look like gems from a distance, highlighting the rich luxury of the car in question.

Whatever Carlo intended when he designed the first logo, he was successful in creating a timeless image – capable of standing with the Bugatti brand for years to come.

The Bugatti Emblem is almost as eye-catching as the full logo itself. The Emblem is composed of a B and E in serif font, placed back-to-back atop the Bugatti wordmark. This mirrored-letter design is a classy and engaging way to bring the name of Ettore Bugatti into the design for the car’s logo.

The most eye-catching Bugatti color for most people will definitely be the bright red of the central oval. However, there’s also the white of the font to consider, and the silver circle around the badge, which helps to border the internal logo.

When published in marketing campaigns, the Bugatti wordmark is written almost entirely in white, but it also has thick black shading applied to the components of each letter, to convey an idea of texture and depth.

The white wordmark was an excellent choice, conveying class, cleanliness, and modernism. The red of the Bugatti logo symbolizes passion and power, while the silver is creative and futuristic. 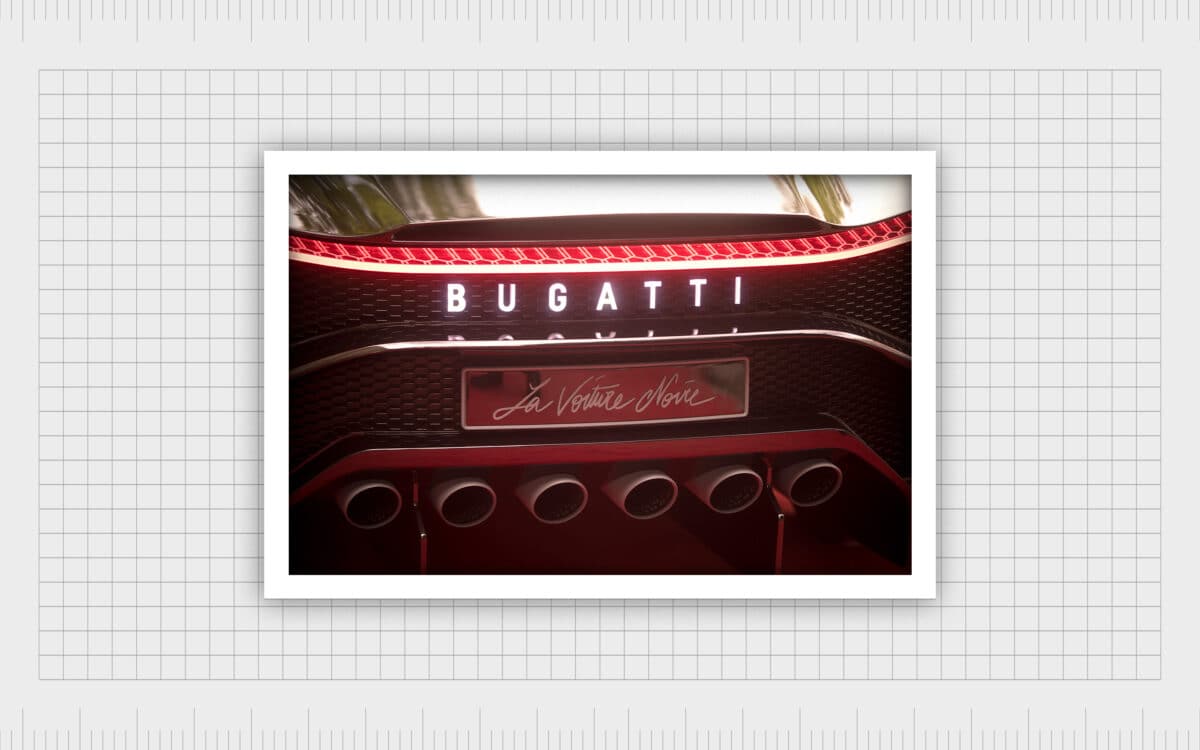 Like most companies, the Bugatti logo font is unique specifically to the vehicle manufacture. According to experts, the Bugatti wordmark is written in Ff-Zwo, which is a sleek, sans-serif font, with a 3D effect to it.

The EB used to create the emblem is in a serif font, with heavy feet on the mirrored “E” at the beginning of the mark.

Although not as complex as some of the other luxury logos out there, the Bugatti logo continues to be one of the best-known in the world today.

For more insights into the incredible world of automobile logos, make sure you check out some more of our Logofile pieces, here on Fabrik.