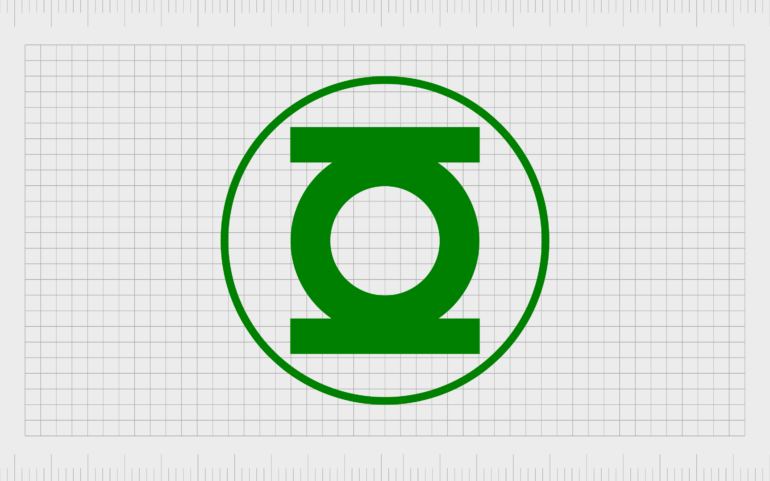 The Green Lantern logo has also appeared as the emblem of numerous people within the DC franchise. While many people associate this image with the original character, Alan Scott, several “Green Lanterns” have used the same emblem throughout the years.

Like many superheroes, the Green Lantern adopted his image over time as the DC universe expanded and reached new audiences.

If you’re a fan of the Green Lantern superhero or want to learn more about the design elements used to identify famous characters, read on.

Who came up with the Green Lantern?

There have been numerous iterations of the Green Lantern through the decades. The original Green Lantern character, Alan Scott, was produced by Martin Nodell in 1940. Martin also had assistance with co-scripting for some of the first stories from Bill Finger.

Green Lantern was introduced in the “Golden Age of Comic Books” as part of the DC franchise. Alan Scott actually originally started out fighting common criminals in Capitol City, before eventually appearing in Gotham city too – the location often associated with Batman.

When the “Silver Age of Comic Books” was introduced, the character for Green Lantern was redesigned, with a new owner of the Green Lantern ring, Hal Jordan. This shift in 1959 also significantly changed the character’s origin story.

The backstory of Green Lantern became less about fantasy and more focused on science fiction.

Over the years, other Green Lanterns have been introduced, including John Steward, Guy Gardner, Simon Baz, Kyle Rayner, and Jessica Cruz.

Today, Green Lantern is one of the longest-lasting series of characters produced by DC comics. They’ve also been adapted to a number of motion pictures, video games, and television shows.

What is the Green Lantern backstory?

Defining the Green Lantern backstory and logo history is difficult since there have been so many variations. Today, most people refer to the “Green Lantern” identity as the term for a series of superheroes rather than just one person.

Green Lanterns are essentially people who fight evil with the assistance of magical rings, which grant them a series of extraordinary powers. These powers are influenced by the imagination and fearlessness of the characters, as well as their incredible willpower.

The characters are all members of the “Green Lantern Corps,” a law enforcement agency managing intergalactic crime.

The original Green Lantern, Alan Scott, has a unique backstory. His history began thousands of years ago when a mystical green meteor fell to earth in China. The voice of the flame prophesized it would act three times: to bring death, life, and power.

A lantern was created out of the meteor which eventually passed into the hands of Alan Scott, a young engineer who became the only survivor of a collapsed bridge. The flame in the lantern taught Scott how to make a ring out of its metal to give him powers.

The story changed significantly in the Silver age of comics when a dying alien gave Hal Jordan both the ring and the lantern. In this story, the alien chooses Hal for his exceptional willpower.

We discover throughout the comics the various colors of the rings and lanterns associated with them all connect to different concepts. Yellow lanterns are powered by fear, for instance, while green lanterns are infused with “will.”

As mentioned above, the Green Lantern logo didn’t really emerge for most of the character’s life. Although elements of the logo were introduced within the initial stories, they wouldn’t be unified until much later, in 1969.

Variations of a logo featuring a green lantern within a yellow circle can be seen on the outfit of some of the original comics.

When the Silver Age of Comic books arrived in the 1950s, there was no “Green Lantern logo.” Instead, the character was identified by his black and green outfit and his unique powers. However, there was a wordmark associated with the comic.

The wordmark, in this case, featured bold white font on a green background. Since then, numerous forms of typography have been used to depict the green lantern. However, a wordmark usually isn’t the most common image we associate with the character.

The origins of the current Green Lantern logo are challenging to pin down. There have been elements of this design present in a lot of different comics and assets over the years, but the most significant image was introduced in 1969, with Hal Jordan’s version of Green Lantern.

Today’s Green Lantern logo is the one most people associate with the character. The image is a stylized depiction of a green lantern, similar to many versions which came before it. However, some people believe there are deeper meanings behind this image.

Featuring a minimalist green shape within a white circle, the logo can also be seen as a circle pushing two lines apart. While this might seem odd at first, it makes more sense when we consider the importance of “willpower” to the Green Lantern character.

Variations of the logo have appeared over the years, eliminating the circle completely. We’ve also seen this image in various colors throughout its media assets.

The Green Lantern logo is an interesting design. Simple and modern, it matches many of the symbols we now associate with the DC universe. Look at the images for characters like the Flash or Wonder Woman, and you’ll notice they all rely on bold colors and simple shapes.

Green Lantern’s logo is intended to symbolize power and willpower. If we look at the image as a lantern, we’re reminded of the hero’s origin story, the Green Lantern Corps, and its mission to protect the galaxy.

However, looking at the image as a circle pushing two lines apart, you see a new message of strength and endurance.

Some designers also note the design looks similar to the “Omega” symbol in the Greek Alphabet. However, the meaning of this connection isn’t entirely clear.

What font does the Green Lantern logo use?

As mentioned above, while Green Lantern fonts have appeared throughout various comic books and movie adaptations, there isn’t a specific font associated with the character. One font variation used for the Green Lantern movie embraced a similar style to many other DC assets.

This image featured a sharp, metallic typography, intended to show the strength and durability of the character. However, the DC comics landscape hasn’t identified this design as the primary Green Lantern font.

What color is the Green Lantern logo?

Sometimes, the lantern is depicted in green within a white circle. Other times, you may see a black symbol on a white background with a green rectangle around it

Notably, no specific green shade is consistently connected to the Green Lantern character. The most common shade has the hex code:

The Green Lantern logo, just like the story of the Green Lantern character, is fascinating. The design has evolved throughout the years, but with very little focus on introducing an official image until very recently, when the DC Universe began to grow.