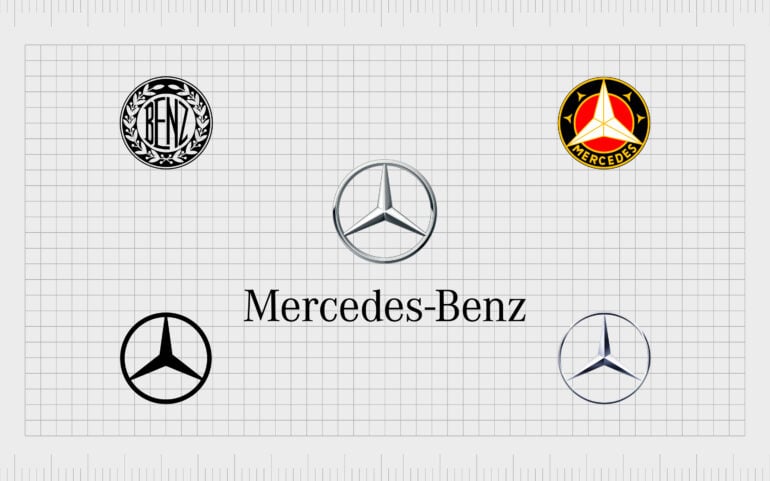 You don’t have to be a luxury car super-fan to recognise the Mercedes logo. As one of the most famous car brands in the world, the Mercedes symbol is universally associated with high class vehicles.

Established almost 100 years ago, Mercedes is a well-known name in automobile history, otherwise known as Mercedes-Benz. The German automobile manufacturer became the largest seller of premium vehicles in the world as of 2018, having sold more than 2.31 million cars.

Whether you know all about Mercedes cars, and want to learn more about their iconic badge, or you’re just a fan of great logos, this guide will be your complete insight into the Mercedes symbol.

Simple but effective, it isn’t easy to find anyone who isn’t familiar with the Mercedes-Benz logo today.

Best known as the “Mercedes star”, the shape has been a consistent part of the Mercedes emblem for several years, although initially, the Mercedes Benz logo featured only the name of the company and nothing else.

The “new” Mercedes logo as it stands today is a simple three-point star designed in slick metallic chrome.

According to one of the founders, Gottlieb Daimler, the star represented protection and later took on the meaning of “perfection” as the number of “3” began to be recognized as sacred, combining the elements of water, air, and land.

In certain instances, the Mercedes logo will also appear alongside the name “Mercedes Benz”, typically written in a simple serif font with a sentence case structure.

The Mercedes brand was originally created by two men with a passion for mechanics and engineering, Gottlieb Daimler, and Karl Benz.

The original Mercedes logo was actually the brainchild of Gottlieb’s sons, Adolf, and Paul. At first, the design was a gold star, which came from a symbol used by their father to mark family postcards.

Eventually, the logo was altered, and became a white star at the center of a circle. Today, the image is a silver circle with a three-pointed star in the middle.

Though the logo still has meaning for the family, it also represents the strength of the Daimler engines on land, in the sea, and in the air.

As mentioned above, the old Mercedes logo didn’t feature the star image at all, but this quickly changed with the input of the Daimler family. 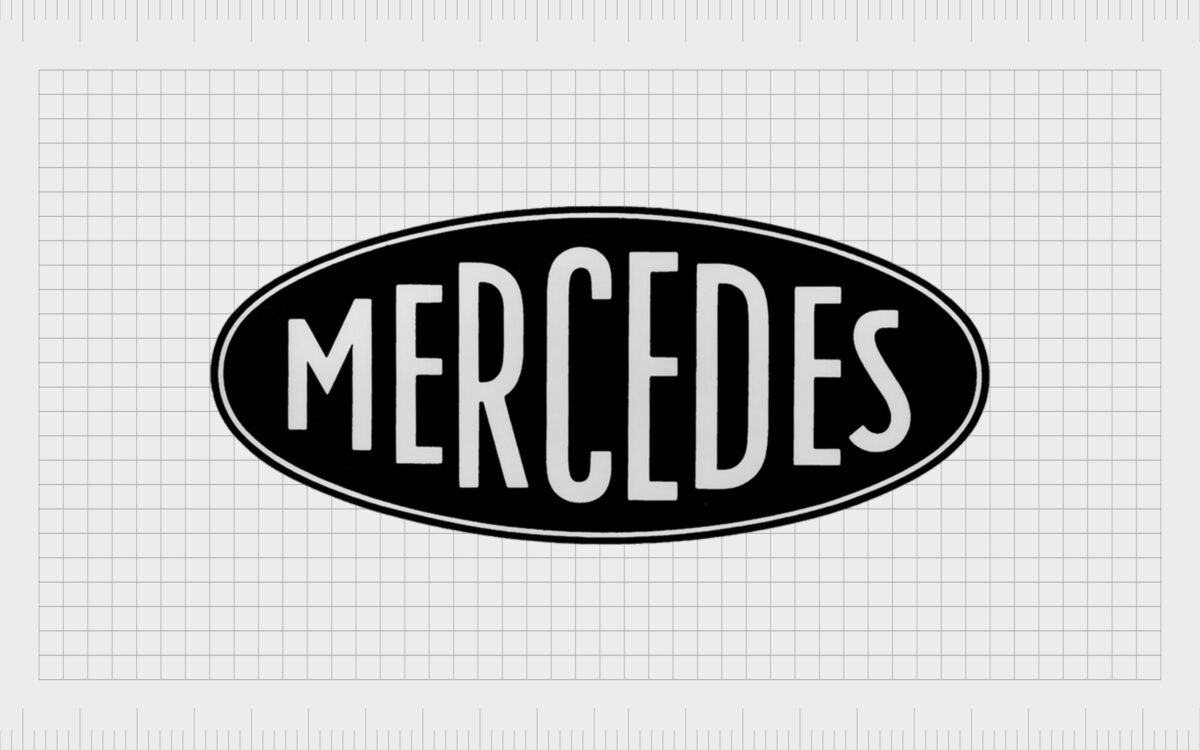 The Mercedes symbol was first composed of an oval badge, positioned horizontally with a sans-serif wordmark in the center. The Mercedes badge here was a little unusual, with the central letters of “Mercedes” appearing larger than the surrounding characters.

All of the letters in this logo were capitals and designed in a soft grey.

The oval itself was in black, with a double outline of grey and black to draw further attention to the name in the middle. 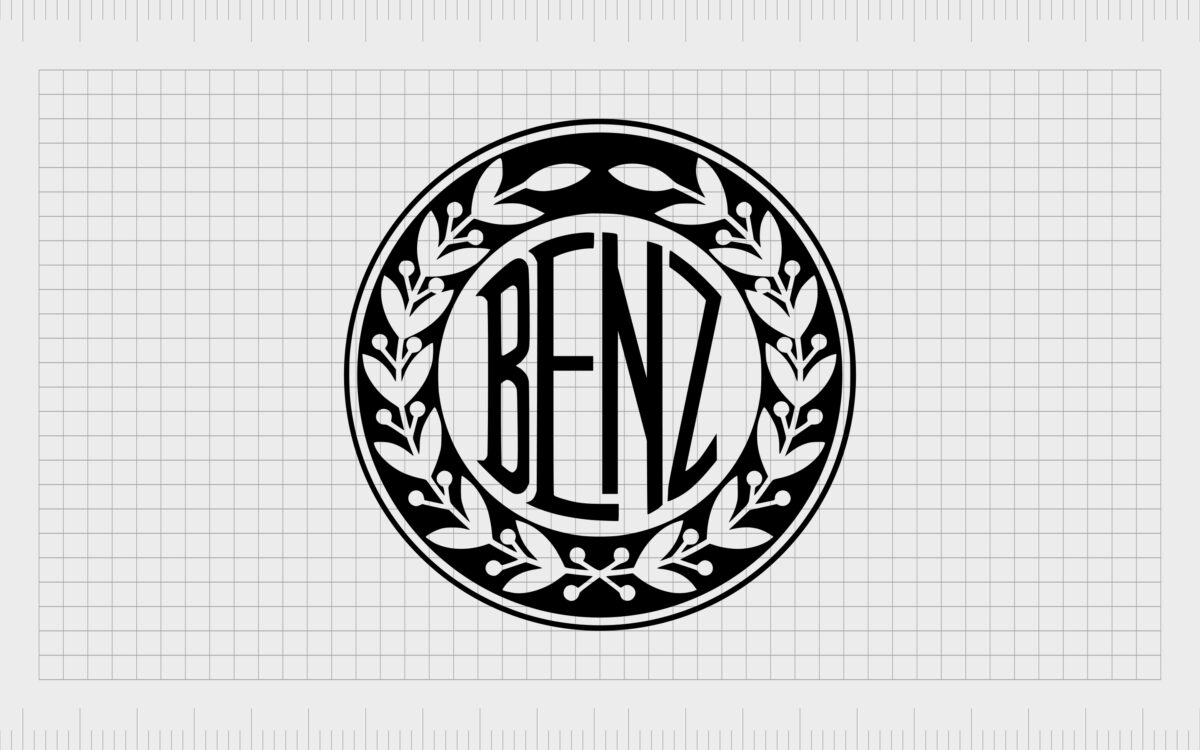 The design of the Mercedes car symbol changed significantly in 1909. This time, the company released a circular badge with the word “Benz” in capital, serif letters in the middle.

The word was written in black on a grey circle, with a border in black around it. The black border featured a sort of crest-style wreath.

This design was far more traditional and detailed than the previous, intended to represent the luxury energy of the brand. 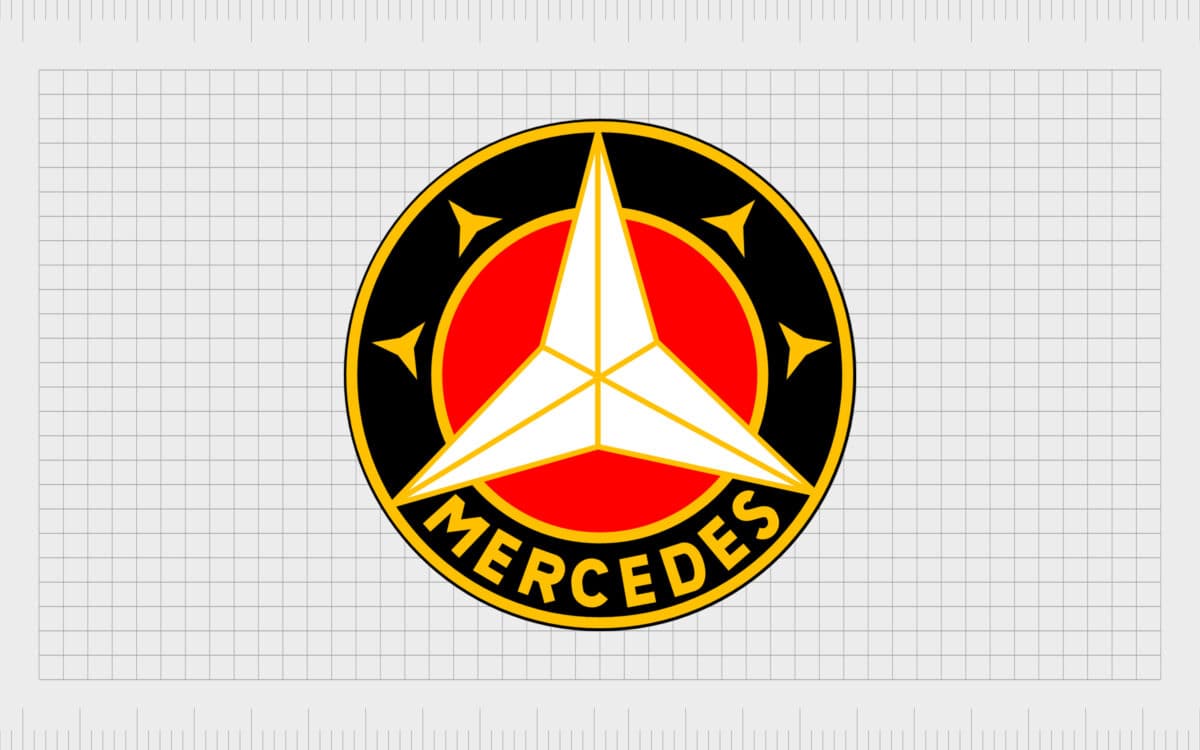 The first version of the iconic Mercedes three-point star appeared in 1916, with a lot more color for the image too. The star was designed in gold and white, on a red background with a thick circular frame.

There were still a lot of ornate details involved with this logo, though it was a little simpler than the detailed badge previously used with the company. 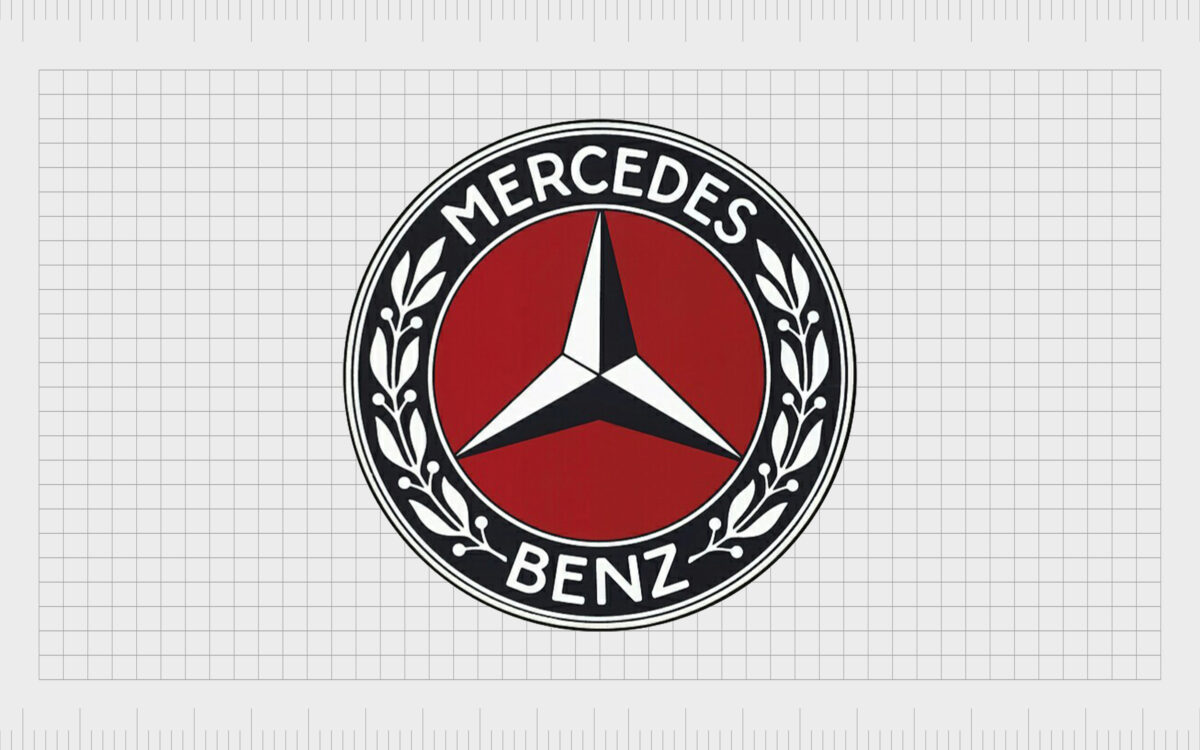 In 1926, a similar version of the badge was introduced in a more monochrome style, with a 3D styling to the three-pointed star in the middle of the badge. This version of the image had the laurel leaves of the previous wreath-style design. 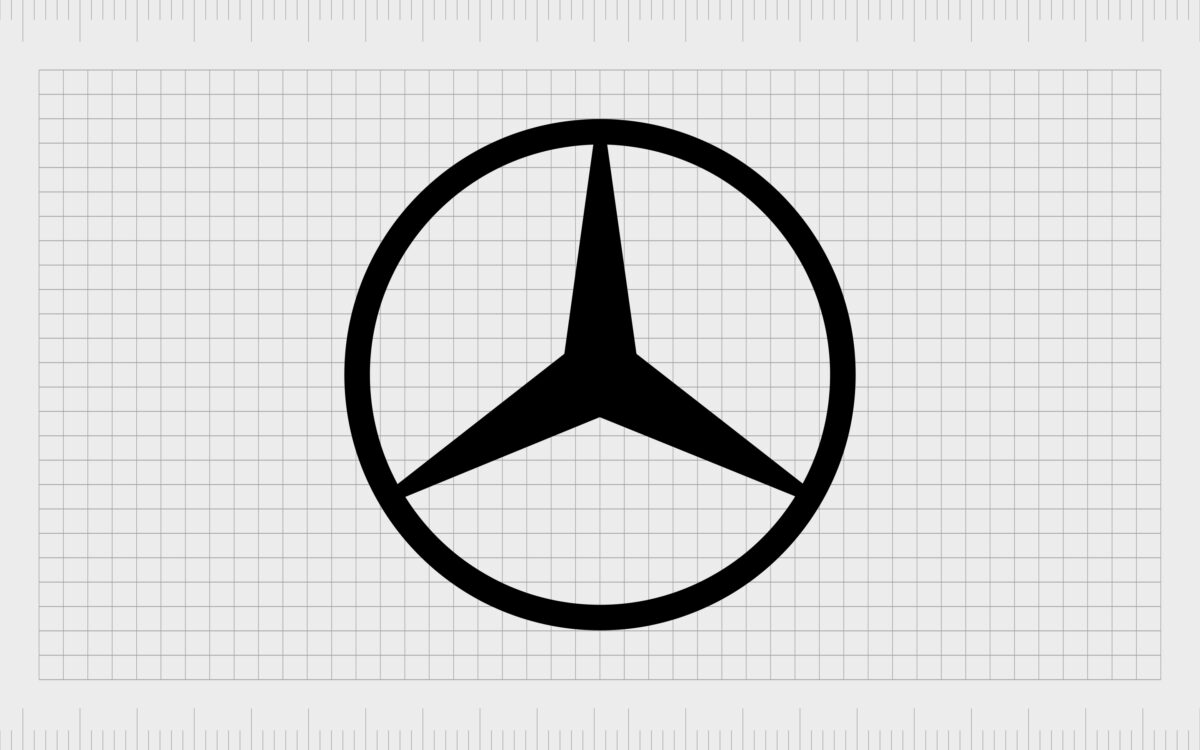 By 1933, Mercedes had begun simplifying its logo, perhaps to make it easier to transition through multiple different mediums. The Mercedes image quickly became a simple, minimalistic version of the three-pointed star inside of a circular emblem. 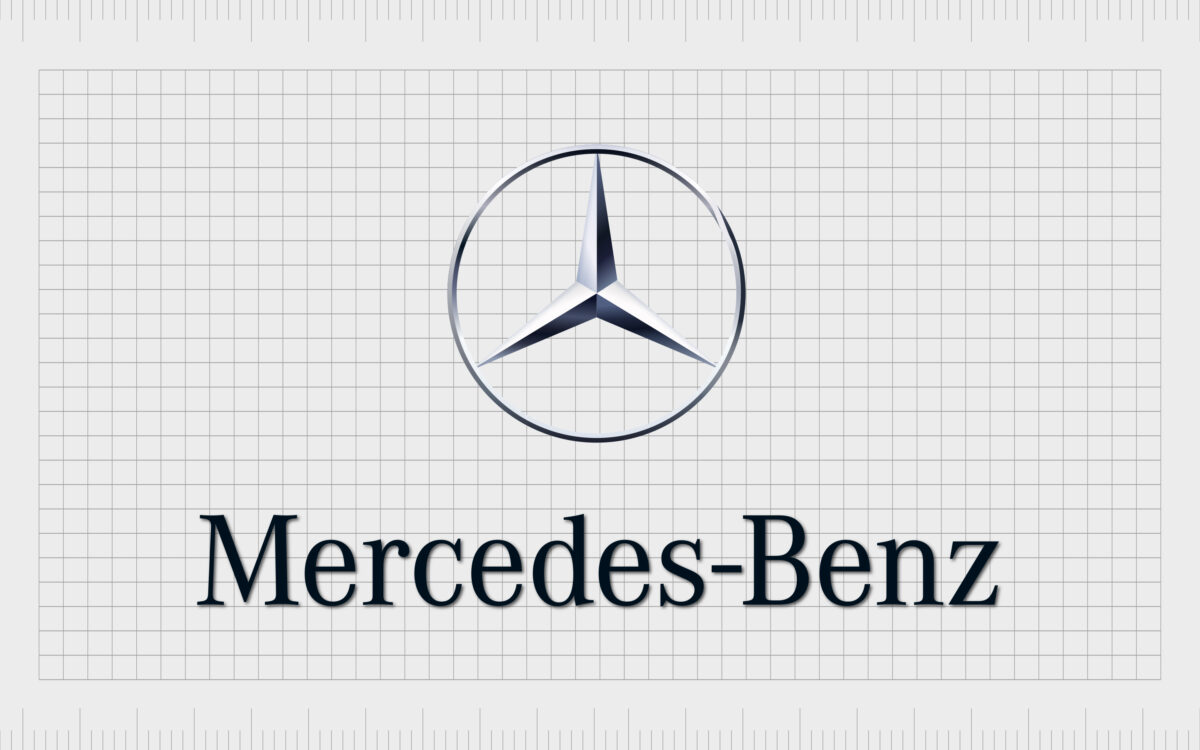 During 1989, Mercedes updated once again for the modern marketplace, making its star three-dimensional, and updating the color palette to gradients of grey designed to represent chrome or silver.

The symbol’s glossy metallic texture perfectly matched the imagery you’d expect to see on a car’s badge anywhere in the world.

The neat and classy inscription underneath the badge “Mercedes-Benz” featured a serif font, with simple, slim letters, perfect for showcasing sophistication. 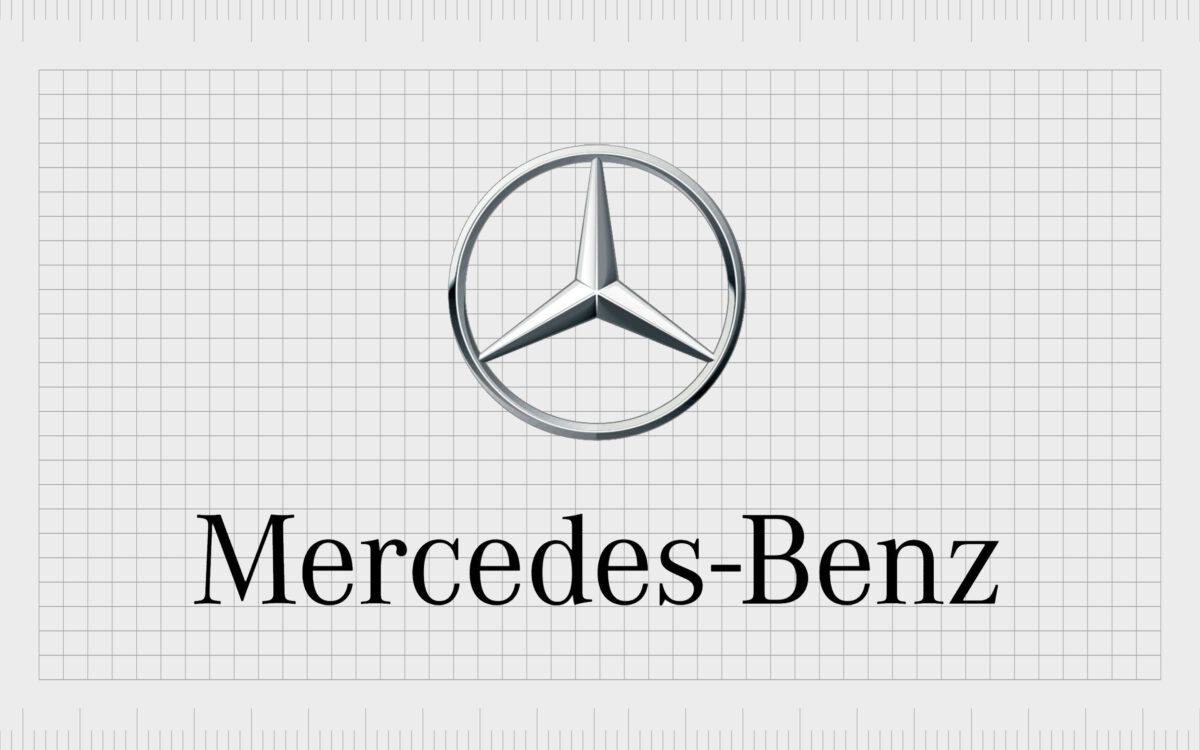 In 2009, this image was enhanced very slightly, with extra weight given to the star in the circle, making it look very similar to a steering wheel on a sport or racing car.

The version of the Mercedes-Benz logo introduced in 2011 became the official image we know today, with a slightly softer color of grey, and a somewhat deeper weight to the wordmark. 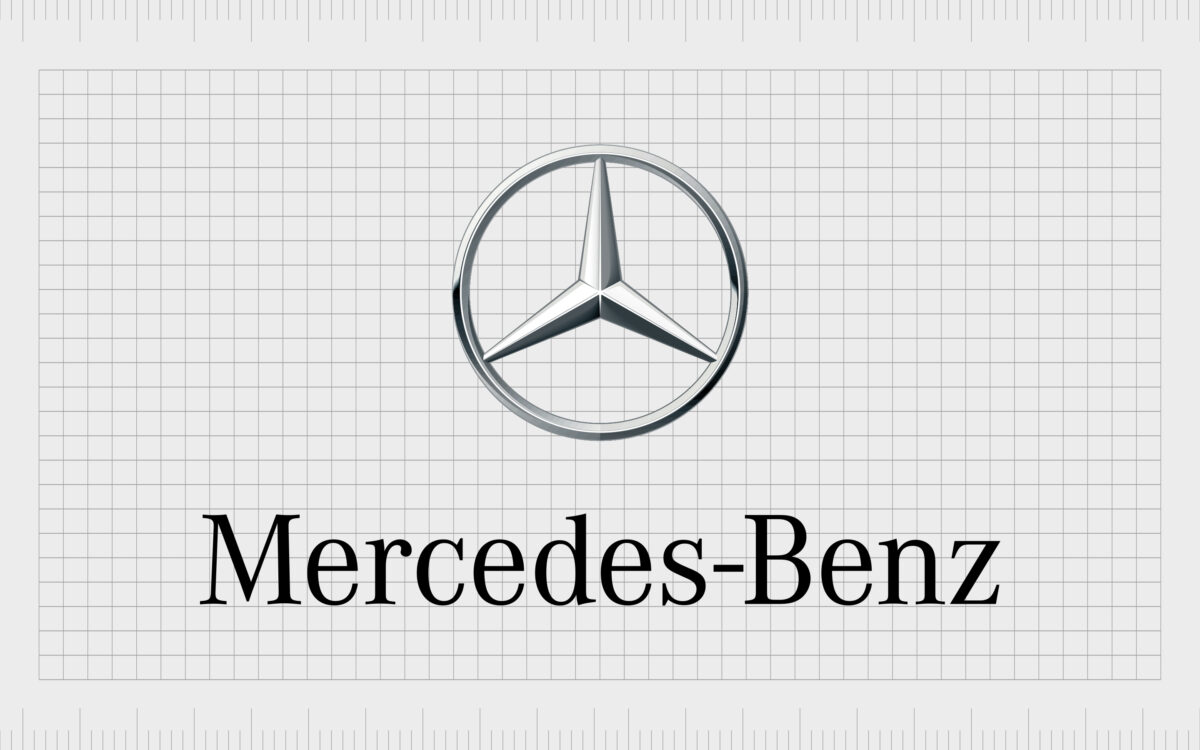 The Mercedes emblem has multiple meanings for the company. The iconic three-pointed star officially became the image of the brand in the 1920s, as a tribute to the Daimler family. The two sons of Daimler chose the star as a representation of the mark their father used to put on family letters.

The traditional contours of the classic five-pointed star were adjusted slightly to represent the three areas where the Daimler company excelled – in vehicles for the air, sea, and sky.

Originally, the emblem was just the simple name of the company, like many of the other competing vehicle brands available around the world today.

The three points of the star are sometimes said to represent “perfection”, as many people associate the number three with ideas of excellence. The circle surrounding the three-pointed star represents both community, and global achievement.

For the first few decades, Mercedes updated its logo and the Mercedes logo color a number of times. Initially, the color of the star emblem featured white, gold, red, black, and grey.

Over the years, the company experimented with numerous versions of the star, including simple monochrome alternatives. The best-known version of the Mercedes emblem today features the simple textured silver – meant to look like chrome.

The colors of the Mercedes logo are:

The Mercedes logo font has evolved a number of times over the years, starting with a somewhat unusual type in the early years, in which the letters were larger towards the center of the word. Today, Mercedes uses the Mercedes-Benz Corpo exclusive typeface.

The typography is a simple and effective serif, to represent ideas of sophistication, history, and elegance.

The Mercedes logo today is one of the best-known images in the vehicle landscape, popular among automobile fans worldwide. Whether you’re a fan of Mercedes Cars or not, you’re probably pretty familiar with the company’s emblem.

Don’t forget to check out our other Logofiles for more insights into some of the top logo innovators in the world today.