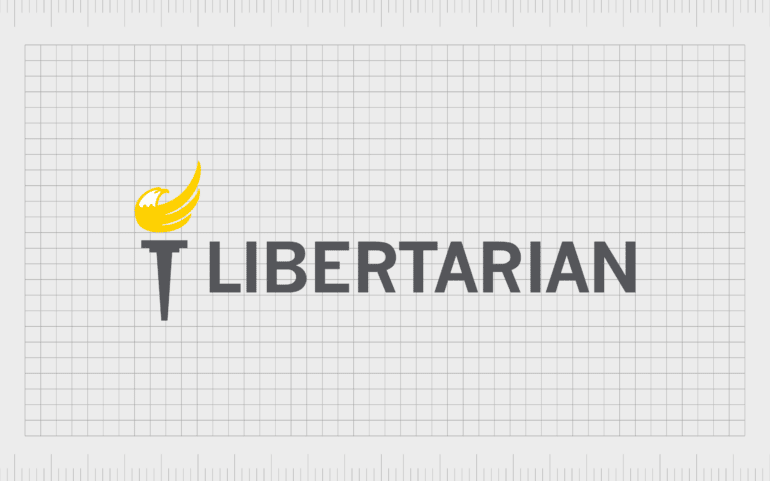 Unlike many political parties, whose logo histories are often shrouded in mystery, the Libertarian Party is somewhat more forthcoming with its image.

Today, we’re going to be taking an adventure through the history of the Libertarian logo and discovering what each unique visual is designed to represent.

Here’s your complete guide to the US Libertarian Party logo.

The US Libertarian Party logo

The Libertarian Party is currently the third-largest political party in the US, behind the Republican and Democratic parties. According to the Libertarian Group, they strongly oppose the interference of any government entities into their family, personal and business decisions.

Though one of the largest political groups in the United States, the Libertarian Party is one of the youngest, forming in 1971 in Colorado Springs, with the support of David Nolan.

As of 2021, there are approximately 354 libertarians holding elected seats in office, which demonstrates the growth of the group over the years.

The Libertarian Party official logo today features the word “Libertarian” written in sans-serif all-capital letters, in a sophisticated grey color. Alongside the wordmark is a symbol which combines the shape of a burning torch with the image of an eagle.

The eagle, depicted in gold, is shaped to look like the flame from the Statue of Liberty’s torch.

With early roots in concepts like anarchy, and a unique approach to politics, it’s little wonder the Libertarian Party has undergone so many logos over the years. There are a number of factors associated with the Libertarian logos which remain consistent today, however.

The Libertarian logo has frequently used the image of the Statue of Liberty in its logos and emblems. In previous years, the logo had included the term “TANSTAAFL”, which meant, “There ain’t no such thing s a free lunch”.

Today, the Libertarian logo, is a lot more simplified. The complex image of lady Liberty has evolved into a simple symbol of a torch. The use of a flame which also looks like an eagle is an excellent choice for highlighting concepts like freedom and liberty in America.

The decision to switch to sans-serif fonts in recent designs of the Libertarian logo may also be a move by the group to attract more modern, younger voters with a friendlier design.

For several years, there was a movement to adopt a “Liberty penguin” as the official mascot. However, the porcupine remains the central animal connected to the Libertarian movement today.

According to the political group, the porcupine may be prickly, but it’s also a cute, cuddly creature who is friendly, but armed and ready to defend themselves if someone initiates aggression. The animal is intended to represent the concept of Libertarian thinking.

Though the Libertarian Party logo has had a few alternatives over the years, the current official logo is an easily recognizable design featuring the animal mascot of the brand or the statue of liberty torch with its stylized golden eagle.

What color is the Libertarian Party logo?

The Libertarian Party logo colors are grey and gold, or white and gold. The central color of the group is golden yellow, although the Party’s logo has appeared in the classic red, white and blue color style in the past too.

Currently, the colors of the logo are:

The decision to use the color grey is likely to highlight the everyday person and the freedom of people to make their own decisions without the impact of government rule. Gray is associated with power, everyday people, and sophistication.

Gold, on the other hand, represents wealth and optimism. The golden color of the eagle as well as the golden shades used for the Libertarian porcupine may reflect the Libertarian’s unique approach to wealth distribution and finances.

What font does the Libertarian Party logo use?

The Roboto font is the central font of the Libertarian Party logo.

You can find some Libertarian logo assets here:

Other symbols associated with the Libertarians

The Gadsden flag is another design many experts connect to the Libertarian movement. This flag was one of the first carried into battle by the US Marines during the American revolution.

The flag was intended as a symbol of American patriotism, as well as disagreement with the government, and support for civil liberties – ideas prized by the Libertarians.

A third symbol frequently associated with the Libertarian movement and political party is the Dollar sign. Though this might seem like an odd symbol to connect with something like a political Party, it has been popular with anarcho-capitalists over the years.

The version of this symbol shown below comes from the “Equilibrium of Liberty”, created by Per Byland. The idea is to highlight a sense of balance created by the development of a free market.

Throughout the years, many groups have adopted their own approved and unapproved versions of the Libertarian Party logo. Unlike most political parties, the libertarians tend to support their followers and communities in creating their own versions of various symbols and images.

After all, the group is all about promoting civil freedoms.

Alternatively, if you’ve followed the growth of the party over the years, you may associate the group with some more “anarchy-style” symbols created by the public.

Either way, it’s safe to say the Libertarian logo is one of the most interesting images to appear in the political landscape.

You can learn more about political party logos over the years by checking out our other fantastic Logofiles on Brand Fabrik.