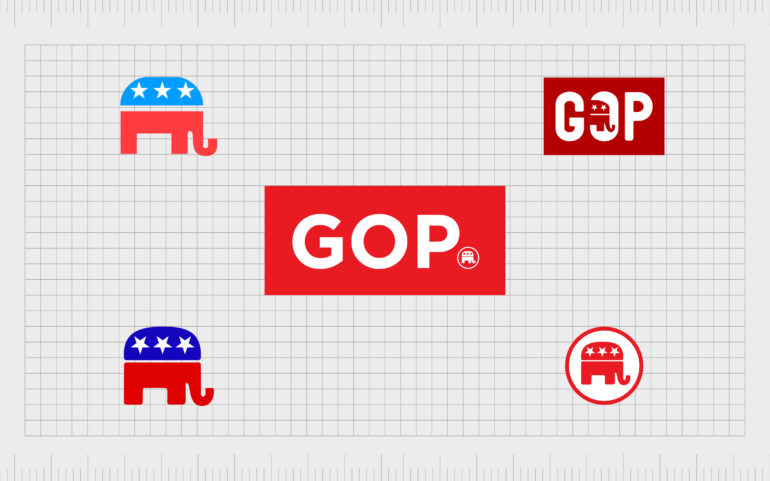 The story of the Republican elephant logo and symbol.

What do you know about Republican logo history? In this edition of Logofile, we’re going to explore the Republican Party logo and elephant symbol, from humble beginnings to the present day.

The republican logo is one of the best-known icons in the world. You don’t need to be an American citizen to be familiar with the image. Almost everyone in the world knows the Republican logo.

Often used to refer to both the GOP logo wordmark, the elephant icon, and the unique colors of the Republican Party, the logo has remained a strong symbol of American heritage for decades.

Get ready to take a closer look at the Republican logo meaning, and its history…

The Republican logo as we know it today is an evolution of the first Republican Party symbol, which appeared when Abraham Lincoln became the first member of the Party elected to the White House.

During this time, an image of an elephant was featured as a symbol in a few illustrations and political cartoons during the Civil War.

According to historians, the phrase “seeing the elephant” was an expression used to mean experiencing the combat of war. This emblem didn’t fully take hold for the Republicans until 1874 when it appeared in an edition of the “Harper’s Weekly” paper.

The design came from Thomas Nast, a political cartoonist.

The elephant was designed as part of a series of events involving the two most popular magazines in New York, the Harper’s Weekly and Herald.

The Herald had once run a story about zoo animals roaming around New York’s Central Park. Thomas Nast drew a cartoon with a donkey wearing a lion’s skin, chasing animals away.

The cartoon was a metaphor about the President Ulysses S. Grant, who was running for his third term of presidency.

The cartoon also included a panicked-looking elephant, wearing a label which said, “Republican Vote”. Since then, the elephant has become the Republican Party’s main symbol.

The accompanying “GOP” logo has also often changed alongside it, representing the “Grand Old Party”

The Republican Party logo remained almost exactly the same for over 100 years, between 1874 to the year 2000. This image featured an elephant in red, with a curved blue semi-circle situated above it. The blue shape had three white stars inside of it.

This version of the logo has appeared on countless political posters, and in various political cartoons over the years. You might have seen the Republican elephant placed alongside the Democratic donkey from time to time too.

The elephant, over the years, went through a few changes, with the animal losing weight at times, and the coloring changing slightly.

Some of the most significant changes to the Republican logo happened when the original design was still in use. Not long before the first year of George Bush’s administration, the stars in the logo were rotated, with the points facing down.

Darker shades of blue and red were also chosen at this time.

When did the GOP logo change?

The GOP (Good Old Party) logo often appears alongside, or in place of the standard Republican Party emblem of the red, white and blue elephant. The GOP symbol is less visual, and usually includes the bold letters “GOP” in white on a red background.

The original GOP logo from 2004 featured the elephant of the emblem above inside the letter “O.”

The original color for this symbol was also a lot darker than the red used today. The animal in the GOP logo had 2 stars on its back, instead of the standard 3.

When the GOP logo updated in 2015, it began a little simpler. The letters, still sans-serif were more spread-out, while the elephant image appeared in a small white circle after the P, rather than sitting inside of the “O”.

The image today seems slightly cleaner, more modern, and perhaps a little more welcoming, depending on who you ask.

What is the Republican Party symbol?

The Republican Party symbol, to most people, will always be the red, white, and blue elephant. Through the meaning behind this icon has been argued for decades, the true impact of the symbol will often depend on the political leaning of the person you’re speaking too.

Republican supporters often argue the Republican symbol meaning relates to strength and endurance – like the elephant itself.

Some people argue the original image of the Republican elephant was chosen because Nast himself was a Republican citizen. This might explain why the Democrats ended up with the “donkey” image, and the Republicans received an animal mascot with significantly more strength.

You can find some examples of the Republican Party logo here.

In the meantime, here are the main elements you need to know:

This depends on who you ask. The Republican symbol and color could be a representation of strength and endurance. Of course, Democrats could argue the logo has more negative connotations.

When the Republican Party symbol change occurred in the year 2000, many said the upside-down stars almost looked “devilish” or satanic.

As mentioned above, the republican color and symbol are often used to represent strength and patriotism. The colors in use with the Republican icons today are white, red and blue. Notably, the shades of red and blue are a little bolder and deeper than they once were.

Alternatively, the Democratic donkey is intended to represent diligence and hard work.

American political party symbols, such as the Republican and Democrat icons can be difficult to understand at a glance. However, these images seem to endure the test of time, regardless of which member of any party makes their way into the Presidential seat.

One point worth noting is despite the differences between the Democratic and Republican logos, both stick to using the same patriotic colors of the American flag. The main difference is the Donkey logo usually has four stars instead of the Elephant’s 3.

Now read these:
—The story of the Democrat donkey
—US political party logos and symbols
—Join the elephant vs donkey debate
—History of UK political party logos
—Flying the flag for British brands
—Guide to the Hewlett Packard logo
—The old eBay logo to the present day
—Microsoft logo history and evolution