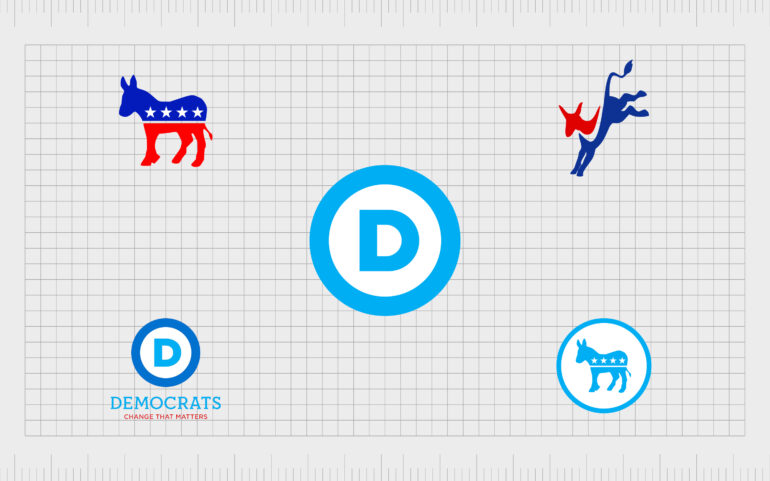 The story of the Democrat donkey and symbol.

The democratic emblem, and the Democrat donkey (technically two separate icons), are historical, eye-catching representations of one of the biggest political groups in the world.

Just like businesses, political parties often use branding techniques as a way of connecting with their target audience. The democratic Party emblem works alongside common phrases, songs, and even a selection of distinct brand colors to identify the Democrat Party.

Today, we’re going to be taking a closer look at Democratic Party logos as they stand today, where they came from, and what they mean.

What is the Democratic logo?

The most common Democratic emblem referred to when people talk about the Democratic logo, is the Party’s mascot: the donkey. Though not officially designed as a specific logo for the Democrats, it’s the image most commonly associated with the Group today.

This Democratic Party symbol actually dates back much further than most people realise, to the late 1820s. According to political historians, anger against Andrew Jackson led to his name been shortened to “A. Jack-ass”.

Banners Medals featuring donkeys were designed to criticize Jackson for removing federal deposits from the US bank.

Rather than fighting back against the ridicule of his enemies, Andrew Jackson chose to embrace the donkey as the unofficial mascot of the Democratic Party.

While the enemies of Jackson had meant the donkey to represent idiocy and stubbornness, the Democrats believed the donkey was a symbol of the hard-working common man.

Although the Democrat donkey symbol started with Jackson’s decision to embrace his new animal mascot, the most memorable use of the image appeared in 1870.

Thomas Nast, a cartoonist from Harper’s Weekly, created a cartoon in which a donkey wearing a lion’s skin was chasing the escaped animals of a zoo out of Central Park in New York.

The donkey in the comic was intended to represent the Democrats, while the elephant holding a “Republican Vote” sign, was connected to the Republicans.

What is the symbol of the Democratic Party?

As mentioned above, the Democrat Party donkey has emerged as an unofficial, but well-recognised icon of the Democrats. Today, it’s common to see Democratic emblems featuring a red, white, and blue donkey with four white stars on all kinds of buttons, campaign marketing schemes, and banners.

However, the official Democratic icons actually go beyond the use of the donkey mascot. Officially, the Democratic Party revealed an updated logo, featuring a light blue D inside of a blue circle.

This image was identified as the official symbol of the democrats – though it’s less commonly known as the donkey.

There are instances of the “official” Democratic logo which also uses a version of the donkey mascot, without the red, white, and blue coloring too. You can find a few varied examples of the Democratic icons on this website.

The design of the Democrat icons featuring the donkey can differ, depending on the campaign, and the individual branding of the person running for office from the Democrat Party.

There have been variations of the donkey with its legs kicking upwards, and versions where the donkey is standing still.

The most common features of the icon include:

The Democrat donkey logo usually appears in red, white, and blue, to represent the American flag. There’s a white line between the top and bottom of the donkey, and four stars on the blue section of the animal.

The official Democrat logo is entirely blue, as the color blue is now commonly associated with the Democrat Party, while the color red links to the Republican Party.

Depending on who you ask, the symbol of the Democrats could be the donkey, or just the blue D in a light blue circle. The donkey is undoubtedly the most memorable image, and the one we see most often.

There’s usually no font used alongside the Democratic donkey logo. The “D” in the official circular logo is a simple sans-serif font in capital format. The thickness of the letter matches the thickness of the surrounding blue circle.

The meaning of the Democrat logo will depend on who you ask. A Democratic Party supporter will tell you the Group chose the donkey to represent hardworking everyday people, and vigilance.

Why is the Democrat logo a donkey?

As mentioned above, Democrat icons officially recognized by the political party don’t actually include the donkey image, though you’ll often see it used across almost all of the campaigns created for this Group.

The “new” democratic logo, which was introduced in 2010, is the official image of the Democrats, and it has nothing to do with the donkey mascot.

Despite the official Democratic Party logo actually being a lot simpler than the donkey emblem, it’s the animal-focused image which gets the most attention.

The Democrat donkey logo is a result of an attempt made by Andrew Jackson to flip the script on the insults hurled at him by his enemies in the political world.

By the time Thomas Nast created his iconic cartoon showcasing the Democratic donkey and Republican elephant, people were ready to embrace this image.

Other cartoonists and media publications embraced the elephant and donkey designs, and these animals have remained with the parties ever since.

Learning from the Democrat Party logos

The logos of the Democrat Party, particularly those surrounding the donkey emblem, teach us some important lessons about branding. Whether you agree with the views of this political party or not, they certainly took the right approach when building their image.

Rather than having to fight against an image and idea already taking hold among the general public, Andrew Jackson decided to leverage the idea and make the donkey his own.

By creating a new narrative for the animal, he was able to create a long-lasting symbol for the Democratic Party which continues to attract supporters to this day.

Don’t forget to check out our complete guide to political party logos to learn more about the political logos in America, and the history of the parties.