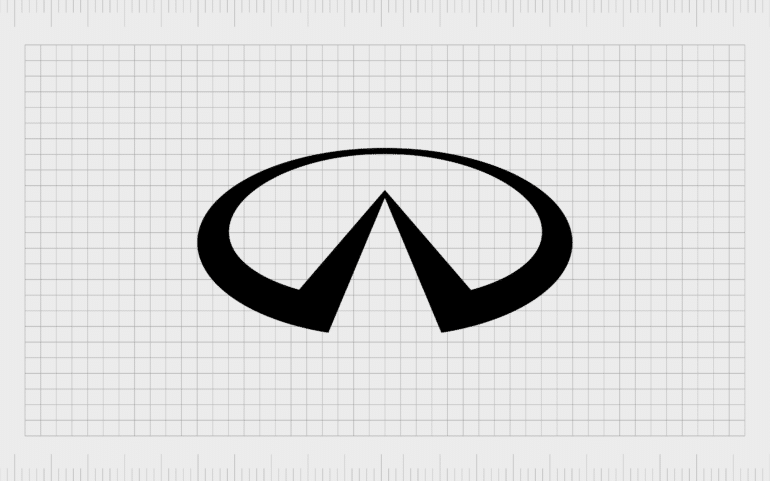 Discover the history and meaning of the Infiniti car symbol.

The Infiniti car logo might not be quite as well-known yet as the Audi logo or the iconic emblem of Aston Martin, but it’s an image quickly gaining attention in the automobile space.

Launched officially in 1989, Infiniti has been gradually making its way onto roads all around the world. As the luxury division of the Nissan brand, Infiniti is best-known for its stunning, high-quality vehicles, featuring the same attention-to-detail customers expect from Nissan.

If you’ve ever looked at the Infiniti car symbol and wondered what it means, you’re in the right place. Today, we’re going to explore the Infiniti story, and the history of the logo.

The Infiniti car symbol is instantly recognizable and brimming with hidden meaning. Like many automobile brands, the Infiniti team designed their logo to capture the hearts and minds of customers around the world.

Whether you’re spotting this logo on a piece of marketing material, or seeing it on a car badge, it’s sure to mean something to you.

The Infiniti car logo is made up of two components. The first component is the Infinity symbol or emblem, a kind of oval shape in black, designed to have more weight towards the front than the back. This gives the illusion of depth.

At the centre of the oval is a cut-out triangle shape, which many believe to represent a road, narrowing gradually into the distance.

The second component of the image is the Infiniti logo font. The name Infiniti is included on most marketing materials, but you won’t see it stamped onto all cars in the same way as the Ford logo. The font is sans-serif, written entirely in capitals, and designed with letters spread very far apart.

As a division of a company, rather than a standalone brand, Infiniti doesn’t have a founder per-se, or a founding story. The organization is the luxury vehicle division of Japanese company Nissan, and it originally began selling vehicles in North America, during 1989.

The marketing network for the new Infiniti branded vehicles included dealers in more than 50 countries during 2010, and by 2020, there were 25 markets served by a series of new car dealers too.

Part of what makes Infiniti so appealing today is its approach to eco-friendly car production. The company announced in January 2018 it was transforming into an electric brand, with all vehicles to be either electric or hybrid by 2021.

Created to draw new attention to a series of luxury cars from the Nissan brand, the Infiniti brand was built with a focus on grabbing customer interest. The name “Infiniti” was intended to create a sense of elegance and sophistication, as well as wonder and excitement.

The decision to change the last letter of “Infinity” to an “I” helped to make the brand name more memorable.

Unlike many of the car manufacturers we’ve looked at before, the Infiniti car logo doesn’t have much by way of a long history. The emblem for the company was chosen with the name, and it has stayed the same since. While perceptions of the logo differ, most people agree it’s definitely memorable.

The design of the Infiniti car logo came soon after the story of the Infiniti brand began, in 1985. The Nissan managers were looking for a way to create vehicles with higher performance characteristics for a market of customers capable of spending more on their cars.

The name for the new brand, chosen in 1987, inspired the logo image, which attempts to symbolize a road leading towards an endless horizon. 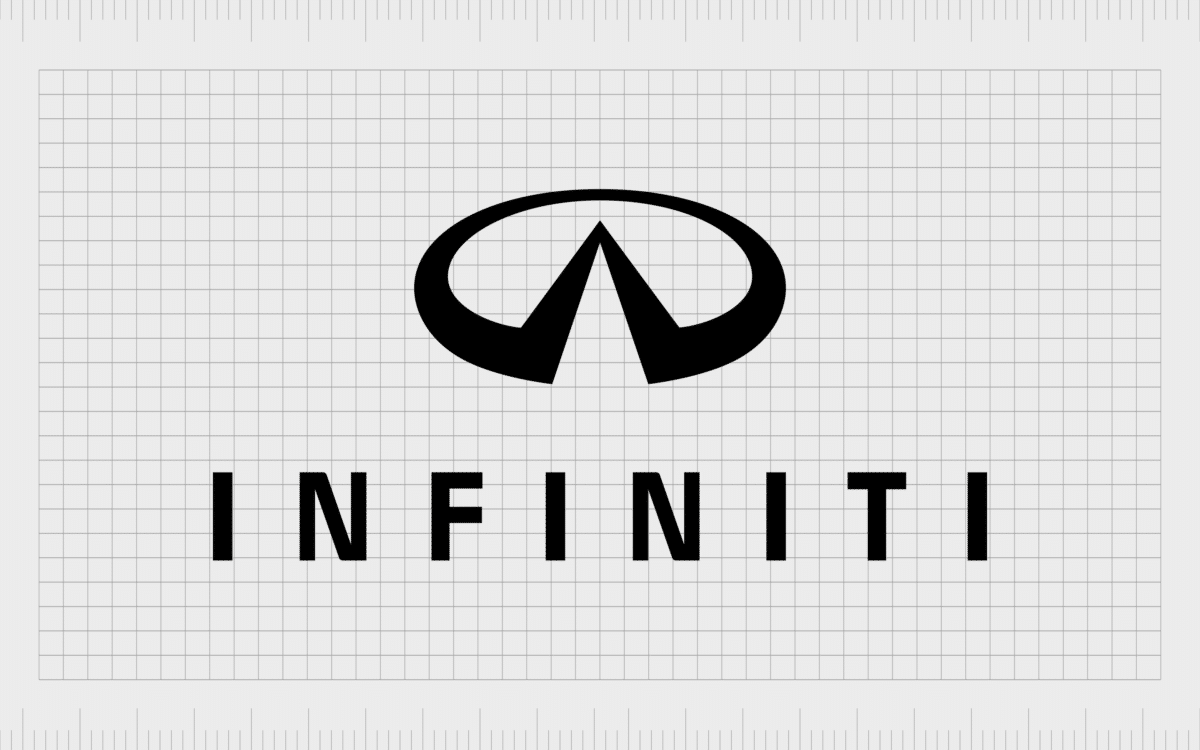 The company announced a competition to help find the right logo and slogan for the Infiniti company. The winning option was introduced by the Lippincott Mercer company.

Infiniti’s symbol is meant to inspire ideas of thinking outside of the box and being on the cutting edge of the industry. It’s often presented either in silver or black, and usually comes with the Infiniti wordmark underneath, in an a highly modern font.

So, how would we define the Infiniti logo meaning?

The iconic Infiniti emblem has remained a consistent representation of the company’s visual identity since it first began. Designed by the Lippincott Mercer company, the design apparently symbolizes a road stretching into the distance, playing on the word of “Infinity”.

However, before making their presentation with the Infiniti logo, the branding agency were told the upward angle of the arrow is similar to one of Japan’s tallest mountain, and the oval could represent the setting sun. The Nissan representatives were very pleased with the idea of Fujiyama being represented in the logo.

The Infiniti emblem is usually depicted in metallic grey when placed on a vehicle. In standard marketing and branding campaigns, the company usually sticks with black and white coloring. 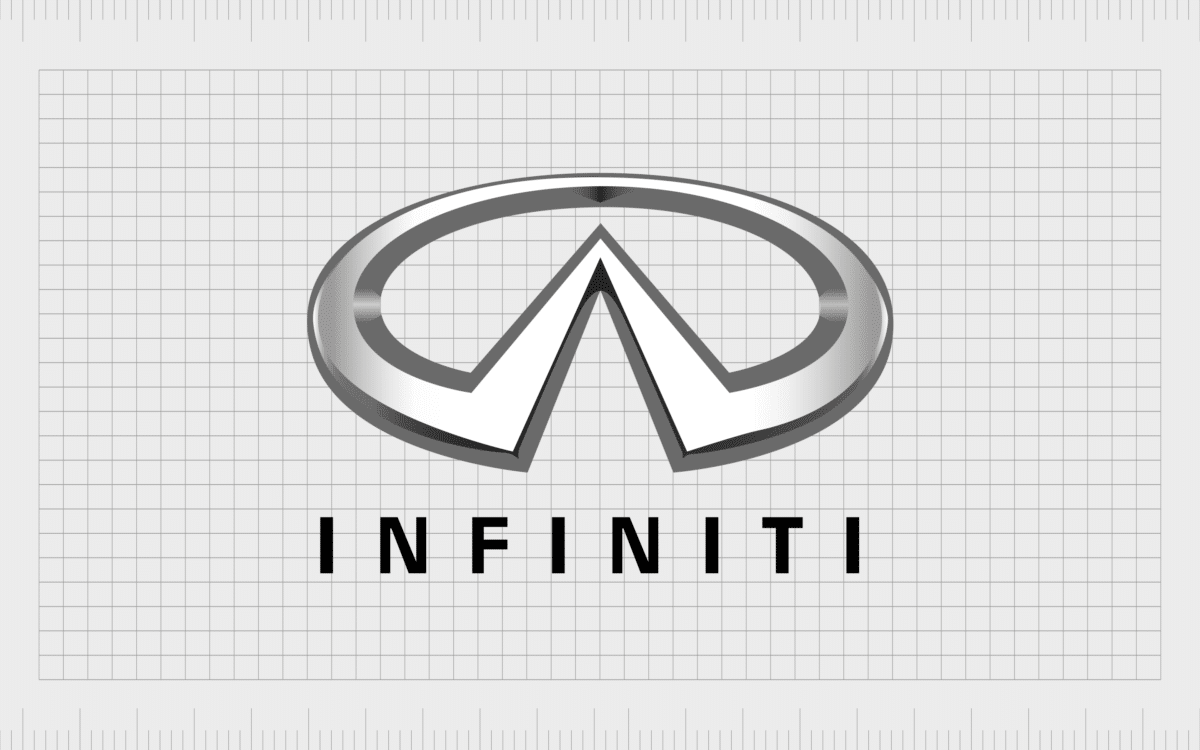 The Infiniti logo colors are simply black and white for most of the company’s branding. However, you’ll be more likely to see the Infiniti symbol in colors of grey and silver when it’s emblazoned onto a car radiator.

The design of the Infiniti badge is usually created to gives the silver a slight sheen, without making it too chrome in effect.

Strong lines around the edges of the silver logo on the vehicles helps to create a 3D effect. In the full version, the Infiniti logo usually includes the name of the brand in grey. The wordmark can also appear in black on marketing materials.

The wordmark for the Infiniti logo features all capital letters, executed in a traditional sans-serif font, similar to Josef Pro Bold, which was designed by Ingo Zimmerman. The font itself is a custom wordmark made specifically for the Infiniti company.

The wide spacing between the letters which help to divide the various components of the wordmark make the font extremely modern. All of the letters are straight, crisp, and written in the same thickness.

Though Infiniti’s logo hasn’t always been the most popular among modern car brands, it’s something many customers instantly remember today.

Despite being compared with a slice being removed from a piece of pie, or an image resembling Pacman, the Infiniti logo has a much deeper meaning for the people who drive the cars. This might be why the image has continued to impress for so long.