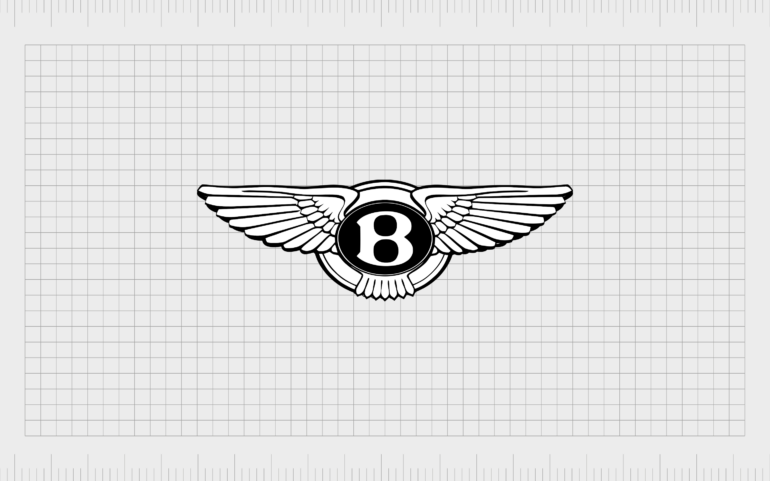 The story of the Bentley symbol and wings logo.

Are you familiar with the Bentley logo? For many car lovers, the Bentley emblem is more than just the badge on the back of an automobile, it’s a symbol of luxury and prestige. The question is, where did this identity come from, and what does it mean?

The Bentley logo is a highly sought-after insignia among classic car collectors, motor lovers, and fans of British manufacturing.

Today, we’re going to be looking at the history of the Bentley car logo, what it means, and why it’s become such an enduring symbol.

Before we go on a journey into Bentley car history, let’s take a look at the vehicle company’s symbol as it stands today. The official Bentley logo features a set of silver wings, designed almost like the badge for an aircraft pilot, with a capital “B” emblazoned in the center.

According to Bentley, the wings on the logo are a symbol of the “celestial”. Before Bentley began making motor cars, the organization was involved in creating aircraft engines for World War 1. The choice to use wings as a central part of its logo seems like an obvious one for this reason.

The meaning of the “B” is obvious, but what makes the Bentley logo interesting is its versatility.

When the company first started using the winged emblem, the coloration and number of feathers used would vary based on the version of car. Vintage cars have 14 hackles on the right and 13 on the left, while derby cars have 11 and 10.

Bentley is a British motor company, created by Walter Owen in 1919. Though the business started life creating airplanes, after World War II, the car market seemed to be the most promising one. Luxury was in high demand at the time, though Bentley struggled to immediately earn the attention it needed.

At first, Bentley cars failed in the market due to their higher price, but eventually the promotional efforts of the company, revolving around price as an indicator of technical excellence, paid off.

As Bentley continued to produce new cars, and the popularity of the brand grew, the Bentley logo meaning took on new forms. The manufacturers started adding different feather counts to the Bentley insignia to determine the type of cars.

The simplest cars usually have wings with 10 feathers on each side, while asymmetrical wings are more common in racing cars, as this is considered to be good luck.

The old Bentley logo: Bentley car symbols over the years

Part of what makes the Bentley cars symbol so special is its endurance over the years. The first version of the logo was created in 1919, and it has remained consistent since then.

The Bentley wings logo has been with the business from the moment it started making motor cars. The only thing changed in this emblem is the number of feathers on the wings surrounding the capital “B”.

While the Bentley symbol might seem, a little complex compared to other logos from companies like Ford and Audi, it’s a testament to the artistic nature and creativity of the company.

As other brands have simplified and modernized their logo, the Bentley car emblem holds strong as a beacon of heritage and class. Even the font of the capital “B” is the same as it was over 100 years ago.

While the number of feathers on each wing changes for each type of car, the Bentley logo emblem maintains a constant appearance on every vehicle produced by the brand. You may not even notice the feather difference until you look closely. 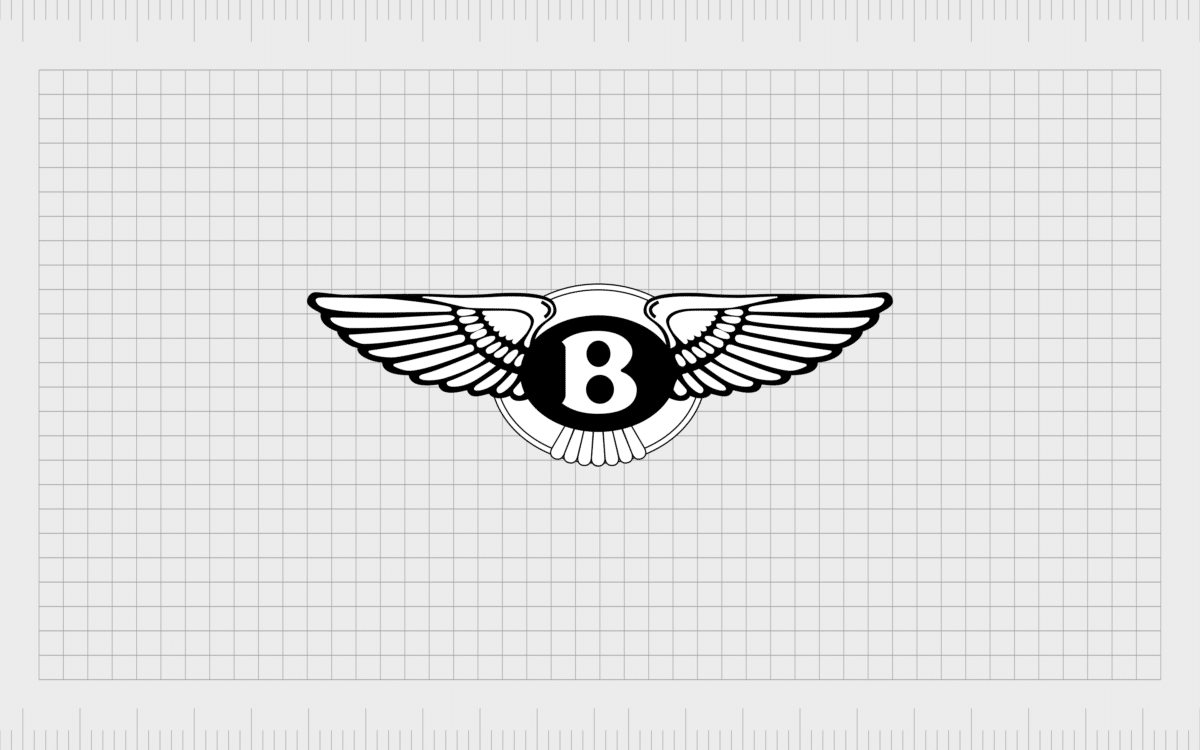 Bentley car emblem: What does the Bentley logo mean?

The Bentley emblem is an artistic expression of creativity, and freedom. Like many logos featuring wings, the Bentley logo evokes thoughts of speed and euphoria. The connection with the company’s previous occupation in aircraft development is also evident in the use of the wings.

The wings appear to be placed on a silver circle, where another, smaller black circle is embossed in the center. Here is where we see the capital “B” in a serif font with plenty of bold curves. The “B” of course, stands for Bentley.

The Bentley emblem is a celebration of speed, heritage, and the freedom of the open road, but it’s also an insight into the unique personality of the brand.

The decision to change the number of feathers on the wings of the emblem for different cars is an interesting quirk, and one we wouldn’t normally see from the majority of vehicle manufacturers.

The Bentley logo color choice, like the rest of the unique design, has remained the same since the beginning of the brand.

The most common colors used in the Bentley logo are black and white, but silver hues are also common in 3D versions of the emblem. 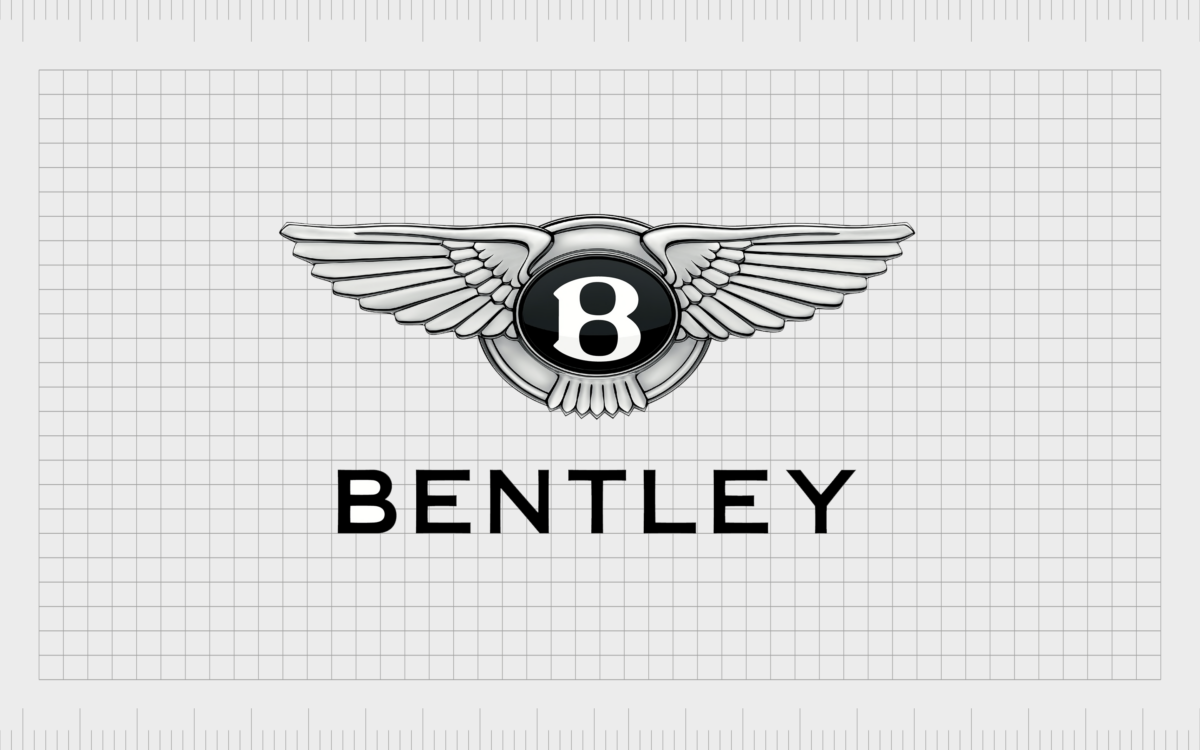 In color psychology, the color white signals purity and charm, as well as creativity and clarity. Black often stands for sophistication, elegance and superiority – all qualities that Bentley has in spades.

Silver, when it does appear in the Bentley logo colors, is an excellent symbol of modern design and British aristocracy. In some cases, throughout the years, standard Bentley vehicles and racing cars have used different colors.

The oval between the wings of a racing car may be green, while it appears in red for some exclusive classic cars. This helps to identify the style of car, similar to the use of a different number of wing feathers.

The font of the Bentley logo hasn’t changed in more than a century – this is an unusual thing among many historical brands. In the last few years particularly, many older companies have updated their emblems by switching serif fonts with sans serif alternatives.

For Bentley, the decision to use the same font is a way of emphasizing the respect the company has for traditions.

The Bentley “B”, is a bold capital letter, written in a unique font, customized exclusively for the Bentley brand. Sometimes, you may see a sans-serif “Bentley” name written underneath the central emblem in all capital letters too.

At first glance, the Bentley logo might seem like just another interesting car logo. However, closer inspection of this symbol reveals a lot of valuable information.

The Bentley symbol is a testament to the history of the brand and the origins of the vehicle manufacturer. It’s also a wonderful expression of freedom and creativity – values held close by the company.

The unique elements of the logo, such as the decision to use different numbers of feathers in the wings for different kinds of cars is an insight into the playful and intriguing personality of Bentley as a brand.