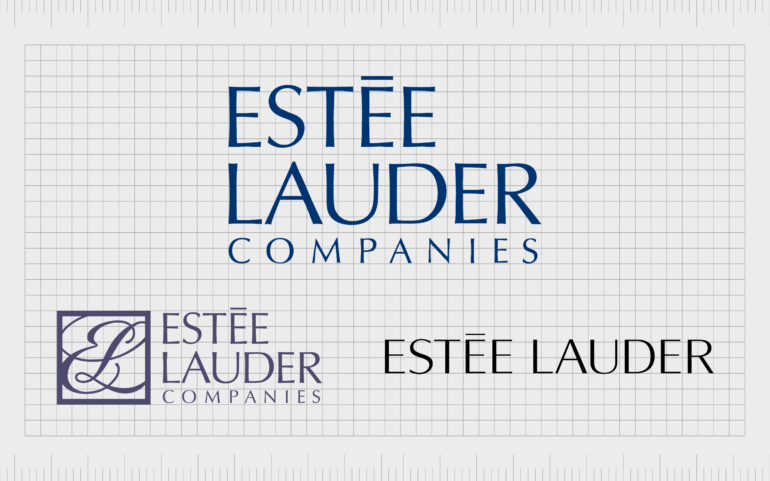 You don’t need to be a beauty and cosmetics expert to be familiar with the Estée Lauder logo. One of the best-known brands in the world, Estée Lauder has evolved from a simple family name, into an icon of the skincare landscape, responsible for a host of additional companies.

Today, Estée Lauder is a multinational manufacturer of makeup, skincare, fragrance, and hair products, based in New York City (Manhattan). The company is more than 75 years old and has a presence in countries all over the globe.

The Estée Lauder logo might not seem particularly mind-blowing at first glance, but this sophisticated wordmark has helped to convey the unique personality of the brand for decades now. Simple and elegant, the Estée Lauder brand is one you won’t soon forget.

Before we dive into an exploration of the company’s iconic logo, let’s take a dive into some simple Estée Lauder history.

The roots of the iconic Estée Lauder Companies organization go all the way back to 1946, when a woman named Estée Lauder, and her husband, Joseph Lauder, began producing their own brand of cosmetics in New York City.

Over the next 15 years, Estée Lauder’s range expanded, and product sales throughout the United States increased at an exceptional rate. Eventually, the brand opened its first international store in the London branch of Harrods, and an office in Hong Kong appeared the year after.

In 1964, the Estée Lauder companies brand began to grow, introducing the Aramis line of fragrance, and in 1967, Estée Lauder was given the title of one of the top outstanding women in business in the US.

In 1968, the company expanded again, opening the Clinique brand.

Over the years, Estée Lauder has evolved extensively, eventually purchasing a number of other popular cosmetics companies, such as Bobbi Brown Cosmetics, MAC Cosmetics, and the La Mer brand.

Today, Estée Lauder is one of the biggest cosmetics companies in the world.

Known as one of the major luxury beauty companies in the world, Estée Lauder has taken the world by storm not just with its own product range, but with a variety of fantastic sub-brands too.

What does Estée Lauder mean?

Estée Lauder is simply the name of the woman and innovator behind the Estée Lauder company. The husband and wife chose to name the company after the entrepreneur who first started the product line.

Who was Estée Lauder?

Estée Lauder was one of the world’s most famous businesswomen, responsible for co-founding her eponymous cosmetics company with husband, Joseph Lauder.

Estée Lauder was the only women to appear in Time magazine’s 1998 list of the 20 most influential geniuses in business for the 20th century.

How did Estée Lauder get started?

Estée Lauder decided to start her cosmetics company with support from husband, Joseph Lauder. She started off selling skincare and makeup products in beauty salons, introducing products to women sitting and waiting for their hair to dry.

Who is Estée Lauder owned by today?

Estée Lauder is a self-owned brand responsible for a number of additional companies, including the MAC Cosmetics and Clinique brands.

Is Estée Lauder a high-end brand?

Estée Lauder is considered a “prestige” brand, selling various forms of luxury beauty and skincare products. However, not all of the sub-brands in the Estée Lauder companies collection are necessarily high-end brands.

The Estée Lauder symbol is one of the few in the cosmetics industry which haven’t gone through very many changes over the years. The Estée Lauder logo has essentially remained the same since it was first introduced in 1946.

Though a simpler sans-serif version of the logo has appeared once or twice throughout the company’s history, most people are familiar with the current corporate symbol.

There are a few different elements to the Estée Lauder companies logo today. The current design features the name “Estée Lauder” written in simple sans-seif font, with a few flares around the edges. The design is intended to look minimalist and elegant, giving the company a sophisticated image.

There are variations of the logo which feature a slightly more refined version of the font, with unusual edges and slight angles on some of the character glyphs.

This variation of the logo also includes a monograph of the letters “EL” depicted in a script font inside of a bold square. This additional flourish sometimes still appears on cosmetics produced by the brand and is often depicted with a white font on a black background.

The logo used by the Estée Lauder cosmetics brand is a slight variation on the larger Estée Lauder companies logo. This brandmark removes the word “Companies” from the logo, and also uses a slightly crisper, more refined font.

The Estée Lauder symbol, whether you’re looking at the image for Estée Lauder companies, or the logo for the Estée Lauder products in the cosmetics brand, is simple and elegant. Just as the brand kept things simple with its choice of name, it also chose a minimalist but graceful image.

The slightly simplified version of the Estée Lauder logo on the cosmetics makes it easier to reproduce in a wide range of different sizes, and on different colored backgrounds, for product packaging.

There’s no hidden meaning behind the Estée Lauder logo. Rather, the symbol aims to simply set the company part as an innovative, forward-thinking and elegant company, with a focus on sophistication.

It’s a fantastic image meant to represent a woman with her eye on the future of beauty.

What color is the Estée Lauder logo?

You might have noticed a few different Estée Lauder logo colors over the years, as the symbol has appeared in both black and white color schemes, as well as varying shades of blue.

The use of blue in the Estée Lauder logo today is intended to symbolize grace and excellence, while the white depicts elegance, nobility, and purity.

The official brand colors are:

What font does the Estée Lauder logo use?

The Estée Lauder logo font can be one of two options depending on which variation of the emblem you’re looking at. The crisper Estée Lauder font is called Optima, and it’s best-known for representing the wordmark on the Estée Lauder cosmetics products.

The sans-serif typography in the Estée Lauder branding is Akzidenz Grotesk. The combination of fonts is excellent for conveying minimalism and grace.

The Estée Lauder logo today is an emblem of elegance and beauty in the cosmetics world, and a symbol most people know all around the globe. Though simple, this image has earned its place at the top of the list for one of the most famous logos of all time.

The Estée Lauder logo is a great example of how the right logo can create a timeless image for a brand, capable of conveying everything a company needs to say about its values and mission.

Estée Lauder hasn’t had to change its image much over the years because the original logo has maintained its sense of sophistication and class.

If you’d like to learn more about some other icon cosmetics logos, you can find plenty of guidance here on the Fabrik Logofile.