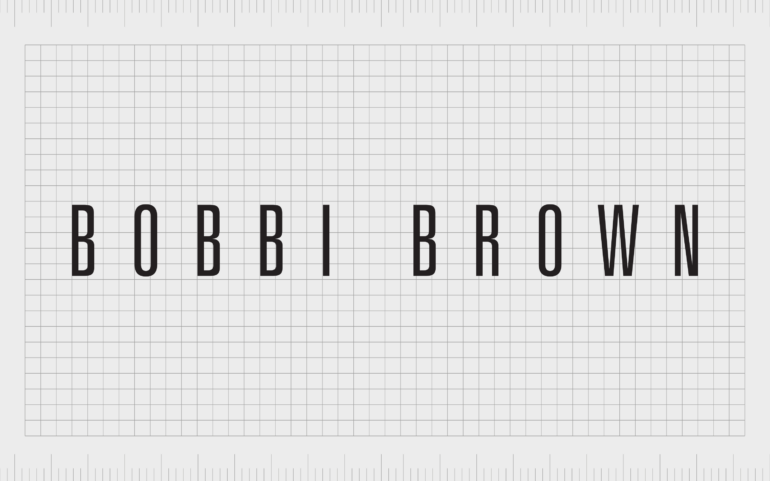 Often associated with quality and purity in the competitive cosmetics world, the Bobbi Brown logo has been grabbing attention all over the world for several years now.

The company, launched by American makeup artist and author, Bobbi Brown, is one of the most popular sub-brands belonging to the Estée Lauder parent company.

Although Bobbi Brown hasn’t had quite as many logos as some of its competing skincare and beauty brands, the brand’s image has become a resilient part of the industry. Today, the Bobbi Brown wordmark is instantly recognisable all over the world.

So, where did the Bobbi Brown brand identity come from? What can we tell about the company from its famous logo, and what can other would-be cosmetics brands learn? Let’s find out.

Before we begin discussing the Bobbi Brown cosmetics logo, it’s worth taking a closer look at the larger Bobbi Brown brand, and where it came from.

Ask a handful of people “Who is Bobbi Brown?” and you might get a range of answers. Bobby Brown was the name of the man once married to Whitney Houston, for instance. Bobbi Brown, on the other hand, is the iconic woman behind the Bobbi Brown Cosmetics Company.

According to the story of the company shared on the Bobbi Brown website, Bobbi started her career as a professional makeup artist in 1980.

Unfortunately, she was constantly frustrated by the lack of shades available to suit all of her clients. Often, Bobbi ended up mixing her own colors to fill the gap.

When a chance meeting with a chemist led her to design her own lip colors, Bobbi Brown began to explore the opportunities of opening her own company, the “Bobbi Brown” brand.

By 1991, ten brown-based lipstick shades from Bobbi Brown went on sale for the first time in the Bergdorf Goodman store in New York.

Within the first day, Bobbi sold over 100 of her lipsticks, and the history of the business began. Eventually, in 1995, the company was sold to the Estée Lauder brand.

However, the organization still maintains the same focus on creating makeup for people in search of a natural look.

Bobbi Brown’s makeup brand took the world by storm by offering a unique approach to cosmetics which focused on creating more natural looks, for a wide range of skin tones. Although Bobbi doesn’t work within the brand today, she has continued her adventures in cosmetics.

Where is Bobbi Brown from?

Bobbi Brown was born in Chicago, Illinois in the United States. However, the first examples of Bobbi Browns Cosmetics were sold in a store in New York.

Who is Bobbi Brown?

Bobbi Brown, born in 1957, is an entrepreneur, author, and makeup artist, known for creating the Bobbi Brown Cosmetics line. She has written nine books about wellness and beauty and has recently started her own line of wellness products.

Unlike many cosmetics and beauty companies over the years who have experimented with a wide range of different images, Bobbi Brown has used the same logo since its inception.

The image is a simple wordmark, written in a sans-serif type, to depict the simplicity and naturalism of the products.

When creating her logo, Bobbi Brown wanted to avoid anything overly aggressive of flowery. As such, the logo of choice was as bare and minimalist as the consumers of Bobbi’s natural makeup products were perceived to be.

One of the most significant unique selling points of the brand is it has always focused on helping people to achieve a more natural “untouched” look. The Bobbi Brown logo conveys this focus on simplicity and realism with absolutely no complex flourishes.

The only different logos you may see for the Bobbi Brown brand online are the variations of this image, where the colors are inverted to black on white, rather than white on black.

The Bobbi Brown logo is a symbol of purity, simplicity, and minimalism. Bobbi Brown wanted to create a cosmetics brand for people who wanted to wear makeup without having their cosmetics seem obvious or unnatural.

The company is now regarded extremely positively for its wide range of shades and color options to suit every skin type.

The Bobbi Brown logo conveys the minimalist nature of the brand, as well as how accessible the company is. There aren’t any elements designed to make this brand more appealing to any specific audience.

The black and white color palette also ensures the Bobbi Brown image can remain timeless and versatile over the years.

Here are some more Bobbi Brown logo resources to inspire you:

What font does the Bobbi Brown logo use?

The Bobbi Brown logo font is a simple sans-serif typeface, with a large amount of spacing between each letter, to improve legibility and create a modern appeal. The logo font looks similar to the Univers Ultra Condensed typeface.

The narrow lines of the font, combined with the unique approach to kerning helps the typography to stand out as being future-facing and unique.

What color is the Bobbi Brown logo?

The Bobbi Brown logo colors are interchangeable. The company permits for branding and marketing campaigns to either use a black font on a white background, or a white font on a black background.

The most common Bobbi Brown logo color choice is the white on black, which helps to convey the sophisticated, stylish, and modern nature of the company.

The use of black and white as a color palette is quite common among beauty companies who want to convey a sleek and stylish appearance. The shades also ensure Bobbi Brown can appeal to a wide range of customers, without creating an overly “feminine” issue.

The Bobbi Brown logotype is one of the most iconic and memorable logos in the cosmetics industry. Ideal for conveying an image of simplicity and authenticity, this logo highlights the underlying values of the Bobbi Brown brand.

Whether used in its standard or inverse color scheme, the logo is wonderfully modern, and ideal for any generation of consumer.

Bobbi Brown’s logo is an insight into how even the simplest design can stand the test of time when used correctly. Don’t forget to check out some of our other cosmetics brand Logofiles for more insights into your favorite brands.

Now read these:
—Cosmetic and beauty brand logos
—The benefits of the Benefit logo
—The history of the Avon logo
—The Anastasia Beverly Hills logo