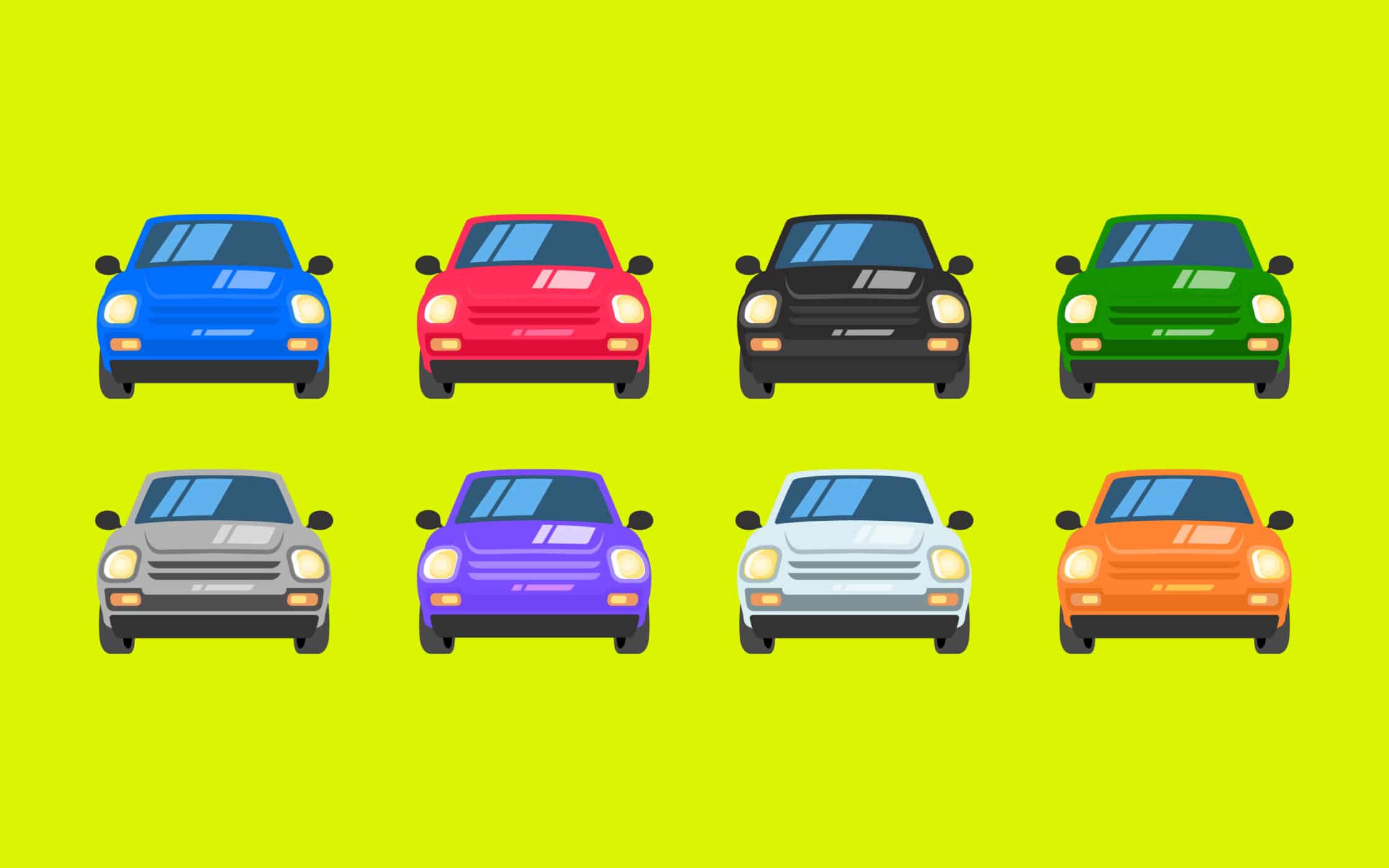 If someone asked you “what are the least popular and most popular car colors in America today?” what would you say? The answer might be more surprising than you think, so read on…

Throughout the history of car colors, it seems as though the most popular car color isn’t always the most exciting.

Neutral shades like white, and grey seem to make the biggest impact on the market today, which may be why, when stuck in traffic, you don’t see a huge rainbow of different colored vehicles all around you.

However, most of us don’t fully understand why certain colors are more sought after than others.

If you’ve ever wondered about car color popularity, and where specific shades came from, you’re in the right place. Here’s your guide to the most popular and leas popular car colors.

The history of car colors

Let’s start with a brief introduction to where car colors started.

In the 1900s, most cars were motorized carriages, a world apart from the vehicle we know today. Painting methods were usually taken from the oil-based coating formulas used for traditional horse-drawn carriages, and applying the paint, waiting for it to dry, and finishing the car took weeks.

While the colors available were luxurious, most paints would end up turning yellow, or fading over time, due to a lack of binding medium. Eventually, Ford developed asphalt-based enamels for cars, using darker colors which lasted a lot longer.

Innovations continued over the years, and after the first world war, new methods of painting were introduced, using tung oil, sprayed and painted onto cars for faster drying times.

Spar-varnishes and spar enamels began emerging for the first time, and in the 1920s, brilliant, exotic shades emerged, with some cars even using multiple colors.

In the 1930s and 40s, single-color cars and chrome trims became more common, and car colors gradually became more uniform. Today, there are only a handful of colors offered by most vehicle providers, unless you’re willing to pay extra for a unique trim.

Why are there so few car colors?

So why are there so few colors available today? Simply put, the most common car colors seen now are the shades which seem to work well for a variety of vehicles, and appeal to a wider variety of customers.

Tried-and-true color combinations have made it easier for car manufacturers to sell their products in huge volumes, without having to worry about creating endless new designs.

It makes sense from a manufacturing and sales perspective to create common colors in bulk and allow customers who want to seek out a more unique shade to access the service of specialist painters.

It’s also worth noting some colors seem to make more sense for certain cars. For instance, while we might expect to see bright or outlandish colors on extremely expensive or luxury sports cars, we wouldn’t expect them on more common everyday vehicles.

What are the most popular car colors?

The most popular car color today is white. It might not be the most unique color, but according to studies, around 23.9% of people say white is their preferred shade for a car, followed immediately by black, with 23.2%. Grey and silver also have high degrees of popularity.

White has actually been among the most common car color options for a number of years. A lot of shoppers appreciate the simplicity of white. Plus, thanks to the rise of companies like Apple, we’ve seen an increased association between white and technological advancement.

White and neutral colors are consistently named as the top colors for all automobiles. They appeal to a huge range of customers and are often associated with luxury and elite status in America.

Conservative colors are simply elegant and universally appealing, which is why we see them so often in various parts of the world – not just the automotive space.

Neutral cars are also relatively easy to keep clean, because they don’t show as many water spots and built-up grime over time. They’re also less likely to show chips and scratches, which might be one of the reasons why the most popular vehicle color will often be neutral.

What are the least popular car colors?

This probably isn’t much of a surprise, as these bright and dramatic colors are some of the least common car colors, you’ll see in parking lots and on roads.

Though it’s difficult to know for certain why the least common car color always tends to be something more dramatic, like purple, it may have something to do with how we want to be perceived when driving.

Neutral colors like white and grey can easily blend in with the rest of the traffic, while shades like gold and purple definitely stand out. Some people simply don’t want to be the center of attention when driving to and from work each day.

When defining the least and most popular car colors, it’s also worth noting:

What is the safest car color?

The question of “which car colors are safest?” can be answered in a few different ways. From a safety perspective for drivers and passengers, studies show brighter and bolder colors are generally the safest, because they stand out in all weather conditions.

White is both the most popular vehicle color, and one of the safest car colors, according to experts, because it reflects light in all conditions, and is easily visible, even during periods of rain. In all kinds of weather and lighting, the visibility of a white vehicle is much higher.

According to the Monash University Accident Research Center, there’s a 12% lower chance of an accident in a white car compared to a black car.

Of course, not all of the safest vehicle colors are the most popular. Yellow and orange cars are deemed particularly safe because they’re easy to spot, and they don’t blend in with the rest of the traffic. Gold, one of the least popular car colors, is also a lot safer.

From a resale safety perspective, for companies who plan on selling specific selections of vehicles, it’s usually a good idea to stick with the most popular car colors. Because white and neutral colors are generally a lot more popular, you’re more likely to find customers with these car colors.

What car colors stand out least?

Notably, when determining the safety of a car, insurance companies and similar brands don’t actually take the color of a vehicle into account. However, on a broader scale, studies do suggest car colors with more of a visual impact can be safer, because they’re more visible.

The car color least likely to stand out on the road is black, followed by darker blue. These colors can be difficult to spot in some weather conditions, and they can also be harder to see at night. Red and deep greys are also associated with less visibility.

While red is a much brighter color than black, some experts say the color can blend with stop signs and break lights which make them harder to perceive in certain cases.

Notably, the finish on your car could also have an impact on how “visible” it appears to be. Metallic shades designed to reflect the sun with plenty of chrome accents are more likely to be visible.

The PPG Annual global report on the popularity of car colors in North America offers some interesting insights into car color statistics:

There’s no one-size-fits-all best color when it comes to choosing the right shade for your car. However, looking at the question “what are the least popular and most popular car colors in America today?” gives us an insight into why certain shades are more common than others.

When choosing your own car color, it’s worth considering not just your personal preferences, but the safety and resale value of any vehicle you choose.