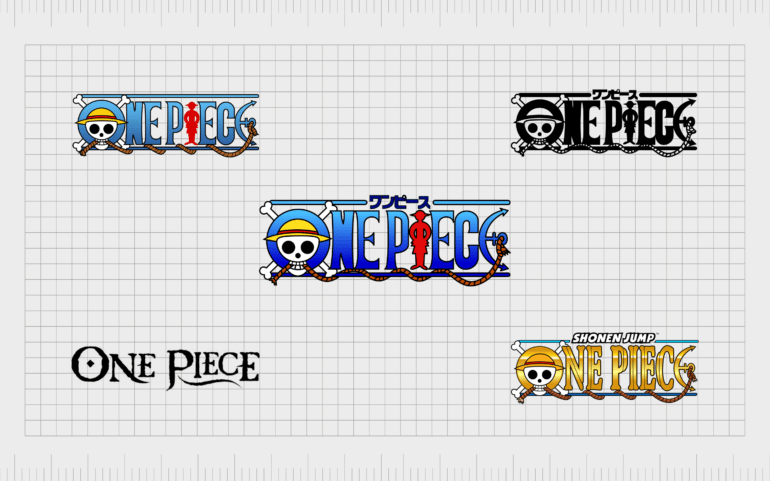 Everything there is to know about the One Piece symbol.

How much do you know about the One Piece logo? If you’re a fan of the manga, you can probably recognize the One Piece symbol at a glance.

Though a little more complex than some other brand images in the modern world, the One Piece logo is similar in style to a number of manga logos.

For fans, the One Piece logo ties a number of components from the manga together into an eye-catching and memorable image. We have everything from a unique wordmark to skull and crossbones (designed to represent the pirate characters in the story).

Today, we’re going to be looking at the various elements of the One Piece logo, its somewhat simplistic history, and what it means.

One Piece history: The manga behind the logo

Among the highest-grossing media franchises in the world, and easily in the top most popular brands based on Japanese manga, One Piece is a story created and illustrated by Eiichiro Oda. Oda is responsible for both the text and the drawings in the original One Piece manga.

At first, the story appeared in the weekly Shonen Jump magazine from Shueisha. Today, alongside 98 volumes of tankobons (a comprehensive manga collection), One Piece has now evolved to include a movie, directed by Production IG, and an anime series, presented by Toei Animation.

Over the years, One Piece has become an astronomical success, with 13 TV shows, a set of fourteen full-length cartoons, a video animation, and a range of video games. There are also countless card games and other popular creations built from the One Piece logo.

Though One Piece may have started life in Japan, the brand has rapidly spread across the world, with circulation in more than 43 countries.

One Piece logo: The One Piece anime logo

The One Piece logo is based on the name of the manga series. Eiichiro Oda began writing One Piece in 1996. The story is in the fantasy and adventure genre, making it an excellent addition to the Shonen Jump and Akamaru Jump magazines.

Though the writer did manage to appear in a series of popular magazines, he was refused approval by the editorial office.

It wasn’t until 1999 when a need for an official One Piece symbol began. The same One Piece logo has remained the same ever since.

However, it’s worth noting there are various versions of One Piece logos which have adapted to suit different versions of the manga, as well as spin-off series.

The visual identity of the One Piece brand is an attractive combination of text and graphics. There’s a unique wordmark, written in all-capital font, with small, sharp serifs. The nature of the font is quirky and almost hand-drawn, which helps to add to the youthful nature of the story.

The graphical elements are embedded into the wordmark itself. For instance, the “E” at the end of “One Piece”, is an anchor, connected to a rope which winds around the lower border of the two lines encasing the “One Piece” wordmark.

There’s also a silhouette (in red), of the main character from the manga, Monkey D. Luffy.

According to the story, after eating a special fruit, Monkey’s body became flexible like rubber. Accompanied by a team of pirates, the protagonist aims to find the “One Piece” treasure and become the pirate king.

One Piece meaning: The One Piece emblem

The ‘purpose’ behind the One Piece logo is to highlight the various aspects of the story which make the manga unique. The anchor and rope, for instance, highlights the importance of the sea, and the quest for treasure within the One Piece story arc.

The primary color of the word mark is also blue, to help depict both the sea and sky.

The decision to highlight the silhouette of the protagonist in the logo is also an important one. The color red helps to draw attention to the importance of the character. However, at the same time, the red shape is similar to a red “X” marking the spot for treasure on a map.

The use of the straw hat on top of the skull’s head is a reminder of another major part of the One Piece character group: the straw hat pirates. Interestingly, the skull and cross bones in the logo holds the rope of the anchor in its teeth.

Versions of the One Piece logo

There have been a number of One Piece logos over the years, with different depictions used for specific purposes. For instance, the logo in Japan includes the Japanese name of the show at the top of the symbol.

There’s also a black and white version of this logo intended for both Japanese and English adaptions of the official manga for the story.

Subsequent components of the One Piece franchise have also used slightly adapted versions of the logo. As an example, the initial “Shonen Jump’s” One Piece logo used between the years of 2004 and 2007 by 4Kids has a slightly different color scheme.

Funimation also created a new version of the Shonen Jump One Piece logo, with gold in the wordmark, rather than the multi-toned blue.

Variations of the logo were also used on some collection DVD sets, featuring just a very simple black and white word mark, in a textured font:

The One Piece logo colors have changed a number of times during the years, depending on where exactly the show or manga was published. Some companies, like Funimation, have also used variations of the logos with slightly different coloring.

The most common colors in the One Piece logo are a gradient of light and dark blue in the word mark, a bright red for the outline of the protagonist, brown for the rope, and a combination of black, white, yellow, and red for the skull and cross bones.

Some hex codes from the manga include:

The colors of the logo are intended to represent the essential elements of the plot, from the blue of the sea and sky merging together, to the brown of the rope, and the red of the devil fruit which made the protagonist into a unique character.

What font does the One Piece logo use?

The One Piece logo is apparently called “One Piece” by Phantom King Graphics, available in both uppercase and lowercase letters. Some people also believe the One Piece logo font is very similar to the “Anime Ace” style of typography.

Similar to many logos reliant on typography to make an impact on their viewers, the One Piece logo font is a special type designed specifically for the anime creation.

If you’d like to use the One Piece logo yourself, or explore the elements of the graphics in greater depth, you can find some available file formats to download here:

Celebrating the One Piece logo

The One Piece logo is an excellent depiction of the unique and compelling elements in the One Piece story. The plot is created around the adventures of a boy called Monkey D Luffy, after he accidentally ate a fruit called Devil Fruit which caused his body to change.

Both critics and readers have loved the unique style of writing in the One Piece saga over the years, built around humor and unique characterization of the individual people within the story.

The manga has been collected in several volumes over the years, which have broken the publication’s record. It was one of the most demanded stories in publication during 2018 too.

With one glance at the One Piece symbol, it’s easy to get an insight into what you can expect from the story. It’s no wonder this is one of the most celebrated logos in manga.