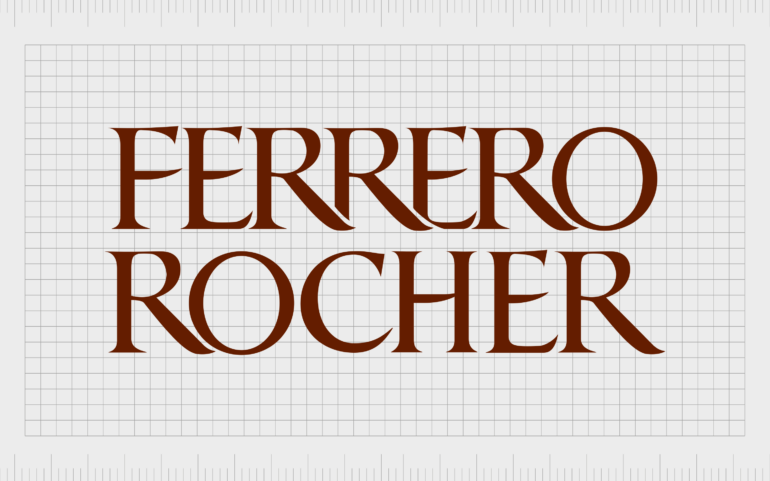 Like many popular chocolate and confectionary companies, Ferrero relies heavily on branding to emotionally connect with its target audience. Using a color palette of deep browns and golds, mixed with a stunning script font, Ferrero exudes quality across its product portfolio.

Today, we’ll be taking a closer look at Ferrero Rocher logo history and the story and background that make this business so special.

Here’s everything you need to know about the Ferrero Rocher brand.

For fans of the chocolatey treat, Ferrero Rocher is an icon of the confectionary world. The Italian brand produces the chocolate and hazelnut treat, “Ferrero”, which is also responsible for various other well-known items, such as the Kinder Surprise, Nutella, and Kinder Bueno.

First launched in 1946, Ferrero had a strong reputation as a leading confectionary company long before the Ferrero Rocher was ever officially introduced.

Pietro Ferrero created the unique cream of hazelnuts and cocoa common throughout today’s Ferrero line-up. However, the son of Pietro, Michele Ferrero, is credited with Ferrero Rocher’s creation.

Michele introduced the Ferrero Rocher for the first time in 1979, mainly throughout Italy and other parts of Europe. However, production was halted quickly after the initial launch, due to an issue with label printing and manufacturing.

Interestingly, the production process for the candy is highly secretive. While the business produces the chocolate using machinery, no notebooks or smartphones are allowed within the production facility.

What’s more, as of 2015, only a few journalists have had an opportunity to visit the plant themselves, or explore the creation process.

Despite the company’s secretive nature, we know the basics of how the Ferrero Rocher is made. The process begins with flat sheets of wafer filled with a chocolate hazelnut cream, similar to the one originally introduced by Pietro Rocher.

The cream is embedded with part of a hazelnut before additional wafer is added to create a ball shape. The whole confection is covered with milk chocolate, a layer of chopped hazelnuts, and another layer of chocolate.

What does Ferrero Rocher mean?

The branding for Ferrero Rocher is all about luxury. Everything from the stunning Ferrero Rocher logo to the beautiful gold foil covering the treats is meant to highlight indulgence. Even the name assists in strengthening the overall imagery of the brand.

According to Michele Ferrero, the creator of the product, the chocolate was named after a grotto from the Lourdes Roman Catholic Shrine. The name “Rocher” also means “rock” or “boulder” in French, which is descriptive of the unique shape of the chocolate.

Today, the chocolate is sold throughout the globe, and has a strong cultural impact for many people. Most consumers see the chocolate as a luxury item, and frequently associate it with Christmas, as a result of the company’s careful advertising and branding strategies.

Is Ferrero Italian or German?

Despite having a French name, the Ferrero Rocher chocolate is Italian in origin. The Ferrero family was actually the first manufacturer in Italy to open production sites and stores abroad in the confectionary sector after World War 2.

What is the Ferrero Rocher Slogan?

Today, the Ferrero Rocher logo is rarely accompanied by any slogan. However, in the past, the company used the tagline “Irresistible Taste Experience” to reference their confectionary’s unique quality and luxury.

Many other Ferrero products also have their own slogans. For example, Kinder Bueno uses “Life Gets Bueno.”

Over the years, Ferrero has maintained a significant amount of its heritage and history in the Ferrero Rocher logo. Today, the Ferrero Rocher branding is quite different from the imagery used for the larger business, which has its unique wordmark in an almost western-style decorative font.

There are only two iterations of the Ferrero Rocher logo evident online today. However, the company has experimented a little with the coloring of the Rocher emblem over the years.

The initial Ferrero Rocher logo introduced in 1979 when the confection was first created was based largely on the branding for the Ferrero company. The wordmark for the Ferrero brand was placed in an ornate oval frame, often depicted in black and white.

The typography of the “Ferrero” wordmark is in stark contrast to the font choice for the “Rocher” element underneath, which appears in a handwritten, script-style font. The delicate cursive was chosen to highlight the luxurious nature of the company.

Underneath this word, we also see a curvaceous line shape.

In 1982, Ferrero redesigned the Ferrero Rocher logo to make it more unique and iconic to the sub-brand. The wordmark for “Ferrero” was replaced with a new font style, which matched the “Rocher” descriptor underneath.

This serif-style font has elongated and pointed tails, intended to showcase indulgence and beauty.

In most cases, this wordmark is often depicted in a rich deep brown color, in reference to the color of chocolate. It can also be placed either on a gold or white background, depending on the packaging or branding requirements of the business.

In some situations, the Ferrero Rocher logo appears inside of a golden oval, a simpler version of the emblem originally used for the company. The logo can also include an image of the confection itself, and the tagline “The golden experience”.

The Ferrero Rocher candy may only be a sub-brand of a larger company, but it has taken on a unique image and personality over the years. Now distinct from the wider Ferrero brand, and the various other products created by the company, the logo is often associated with luxury and class.

The coloring of gold and dark brown makes us think of indulgence and excellence, while the sophisticated serif-style font gives the image a sense of heritage.

If you’re interested in exploring the elements of the Ferrero Rocher logo yourself, you can find some helpful resources here:

What color is the Ferrero Rocher logo?

Part of what makes the Ferrero Rocher logo so iconic and distinctive is its powerful color choices. The warm brown shading of the font represents the brand’s focus (chocolate), and is often associated with concepts like luxury, modernity, and beauty.

The golden elements used in the overall branding and packaging for the Ferrero Rocher are also crucial. For a time, Ferrero referred to the Rocher as the “golden experience”, indicating prestige and excellence. Some of the colors we see in the Ferrero Rocher logo include:

What font does Ferrero Rocher use?

The Ferrero Rocher logo font is a distinctive typeface created specifically for the brand. The custom serif typeface is elegant and professional, intended to showcase the sophisticated nature of the company.

It’s similar to other typefaces such as Shango Bold and the Anavio Small Capitals Bold font. However, certain lines have been modified, bolded, and elongated.

The Ferrero Rocher logo has become an iconic image in the confectionary landscape over the years, helping to differentiate and enhance the appearance of the business. Today, Ferrero Rocher is a symbol of luxury, indulgence, and class, beloved worldwide.

Though the Ferrero imagery hasn’t changed much over the years, it’s an excellent insight into how the right shapes, colors, and font choices can assist a company in showcasing its unique personality and identity.