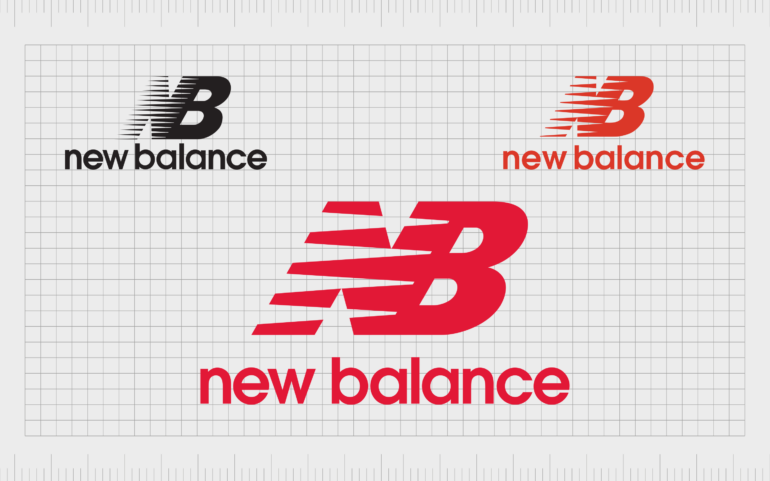 Are you familiar with the New Balance logo history? For lovers of athletic apparel and sports shoes, the New Balance symbol is instantly recognizable. Though somewhat simple compared to some logo designs, this emblem is excellent at conveying a sense of speed and motivation.

Created more than 100 years ago, New Balance ranks alongside Adidas and Puma in terms of their impact on the sporting world. Today, the company serves customers all around the world, producing everything from sporting equipment to apparel.

New Balance is popular among athletes and everyday consumers, all of whom wear the New Balance emblem with pride.

If you’ve ever wondered where the New Balancer logo came from, what it means, or how it’s evolved over the years, keep reading to learn more.

New Balance (NB) is a leading American sports footwear and apparel company established in 1906. Associated originally with the New Balance Arch Support Company, the brand has evolved over the years to become an influential multinational corporation.

New Balance is one of the world’s biggest sporting apparel manufacturers, focusing on bringing unique technical features to their designs. New Balance differentiates itself with the use of heel counters, gel elements, and a wide selection of shoe sizes for customers.

If you’re wondering about the name “New Balance,” it’s believed Riley came up with the moniker after observing chickens in his yard and discovering how his arch supports worked to keep a chicken foot balanced on his office desk.

According to William, a chicken’s “three-pronged” foot helps them to maintain excellent balance.

So, where did New Balance originate? The initial company, New Balance Arch Support, was launched in Boston, United States.

Created by William J. Riley, the company ran under his ownership until 1956, when Riley’s business partner, Arthur Hall, sold the business to his daughter Eleanor, and her husband, Paul.

Paul and Eleanor Kidd sold mainly arch supports for a significant time until 1960 when they designed the world’s first running shoe built with a ripple sole. Eventually, in 1970, the “New Balance Athletic Shoe” company was born.

Eventually, this brand became the New Balance Athletics company in 2015.

New Balance was founded as an arch support company by an Irish Immigrant in the USA, William J. Riley, in 1906. The eventual New Balance Athletics company was created by Eleanor and Paul Kidd, building on the foundations of the arch support brand.

What year was New Balance founded?

What was the first New Balance shoe?

The very first shoe created by the New Balance company was the “Trackster”, designed by Paul and Eleanor Kidd. The shoe was the first in the world to include a ripple sole, and it was also the first running shoe available in a range of widths for better comfort.

Is New Balance a high-end brand?

Is New Balance a good sneaker?

Your perception of New Balance as a good sneaker company will depend on your preferences, and what you want from a set of running shoes. However, most people consider the company’s shoes extremely comfortable, reliable, and excellent for sports.

Unlike many athletics and fashion companies, which have struggled to find the ideal brand identity over the years, there haven’t been many New Balance logos to speak of.

The simple but iconic logo dates back to the 1970s when Paul and Eleanor Kidd introduced New Balance as a sneaker company rather than focusing exclusively on arch support.

Before the company became the New Balance shoe brand, there was very little information about what the brand identity looked like.

The first New Balance symbol introduced in 1972 is very similar to the one we know today. The design featured the letters “N” and “B,” representing the brand’s unique name. As with the design we know today, the “N” in the logo has several slashes across it, demonstrating speed.

The decision to break up the first letter in the symbol was an interesting one by the company, as it helps to convey a sense of dynamism and movement, particularly when combined with the fact the characters are leaning toward the left.

The company’s name also appeared just below the emblem in an all-lowercase sans-serif font. This simple and modern font made the company seem more approachable.

In 2006, the New Balance symbol went through some fundamental changes. The slashes in the “N” were reduced to make the design somewhat less complex while maintaining the right sense of motion and speed. The “B” and “N” in the logo also seemed to blend more deeply together.

The wordmark for this logo remained the same, but the color choice evolved to a bright shade of red. The new coloring helps to demonstrate the passion of the company.

In 2008, New Balance refined its logo again to a point where we now only see four slashes within the “N” of the NB emblem. The logo now appears in a much deeper shade of red, a little less aggressive from a visual perspective.

With this variation of the New Balance emblem, you may see the NB design alone or accompanied by the “New Balance” wordmark in all lowercase. The font choice for the design has remained consistent throughout the company’s history.

The New Balance shoes logo was first created by Terry Heckler, one of the most prolific commercial designers and artists of all time. Aside from creating the New Balance logo, Heckler was also responsible for developing the Starbucks logo and Cinnabon emblem.

He’s also the person who named companies like Encarta and Teragren.

Over the years, New Balance logos haven’t changed much, and they really haven’t needed to. The New Balance brand image is simple but effective, excellent at showcasing speed and power.

The unique positioning of the emblem makes it look as though the “NB” is constantly in motion, progressing towards its goal.

Here are some valuable resources for anyone interested in the New Balance logo.

What font does the New Balance logo use?

The New Balance logo font choices are split into two segments. The first place we see a unique font choice is in the emblem, depicting the letters “NB.” This typeface is similar in style to ITC Avant Garde Gothic. The design, of course, is unique to the brand.

The other font in the New Balance logo is for the wordmark. This is a straightforward sans-serif font, depicted in all lowercase characters, similar to Calibri.

What color is the New Balance logo?

The New Balance logo has transformed very little over the years. Today, the design is remarkably comparable to the one we saw at the beginning of the New Balance logo history. However, this highlights the strength of the emblem chosen by the company.

The New Balance logo is sophisticated and stylish, perfect for conveying movement and power to viewers. The way the design shifts slightly to the left and the use of slash-like lines through the “N” in the emblem conveys speed.