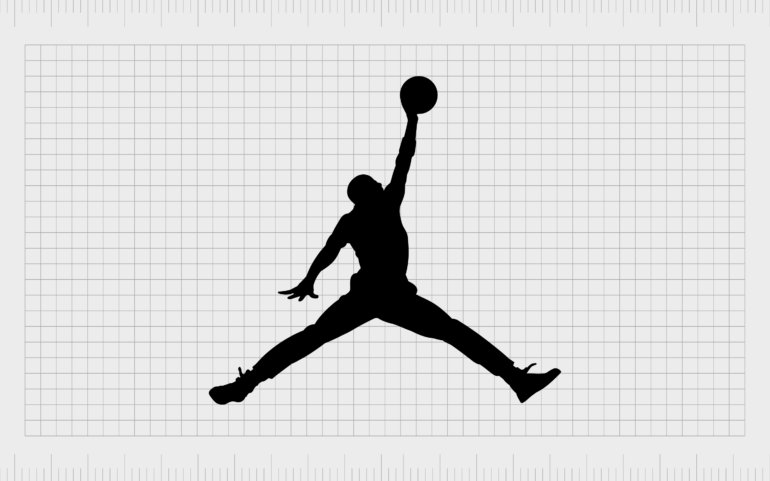 Jordan logo history: The shoe brand with the Jumpman logo

Jordan logo history dates back to 1984 when the famous clothing company Nike first formed its iconic partnership with basketball legend Michael Jordan. Today, the Air Jordan logo, known by some as the “Jumpman” logo, is one of the most recognizable in the athletics industry.

Perhaps more complex and unusual than many of the athletic company logos we know around the world today, the Jordan logo differentiates itself from countless modern brands.

For many, this design has become synonymous with quality, as it’s seen as a seal of approval from Michael Jordan himself.

Whether you’re a huge fan of Air Jordan shoes or you’ve always been interested in the Jordan shoe logo, you’re in for a treat. Today, we’re going to explore the history of the Air Jordan logos and how this design became one of the world’s most iconic logos.

What was the first Jordan shoe with the Jumpman logo?

Let’s start with a quick insight into how the Michael Jordan logo came to be. The first Jordan sneaker to feature the “Jumpman” logo was the Air Jordan III, introduced by Tinker Hatfield in 1988. The same emblem has also appeared on various models since then, up to 2018.

While the Jordan logo first appeared in 1984, following a contract signed between Phil Knight and Michael Jordan, the first sneakers with the logo didn’t appear until later.

What does the Air Jordan logo represent?

The Air Jordan logo, otherwise known as the “Jumpman,” is a stylized image of Michael Jordan leaping towards a basketball net in his custom pair of Nike sneakers. The design is intended to look exactly like Michael Jordan, reminding us of his incredible skills and connection with Nike.

How did Michael Jordan get his logo?

Though the exact story of how the silhouette for the Jumpman logo was chosen remains a mystery, some people say the image was captured at the time of an iconic leap in one of his most challenging matches.

The result comes from a photo taken of Michael Jordan from behind as he prepares to score an incredible shot.

Some Air Jordan trainers feature the Nike logo, but not all of the shoes produced by the company come with the swoosh. One of the only retro Air Jordans to have the Swoosh is the Air Jordan Retro 1.

The company produces various Air Jordans, each with its own approach to design and branding.

The shoe brand with the Jumpman logo

The “Jumpman logo,” as fans of the Air Jordan brand affectionately call it, has helped the Air Jordan company to become one of the most iconic in history. The Michael Jordan silhouette comes from a photo taken by Life magazine before Jordan ever signed with Nike.

To create the Michael Jordan logo most people are familiar with, Michael actually repeated his previous pose for a second photoshoot after signing a contract with Nike. This time, the shot took place with Jordan wearing the first pair of Air Jordans, designed specifically for him.

Using the photoshoot as inspiration, Tinker Hatfield drew the iconic silhouette emblem in 1988, and the first shoe to carry the logo appeared in 1988.

While initially, the company was only planning to use the Jumpman logo for shoes or sports apparel, it eventually became a standard part of many Air Jordan products over the years.

Unlike many logos for athletic brands, the Jordan shoe logo hasn’t undergone any significant changes over the years. Though the design has appeared in several colors to suit different branding efforts and products, the primary elements of the image remain the same.

The Air Jordan symbol features Michael Jordan leaping in the air with a basketball in one of his hands, raised towards the sky. The other arm is outstretched, with fingers pointing toward the viewer.

According to experts, you can tell the difference between the staged photo taken for Nike and the photo which originally depicted Michael’s jump by looking at the hands. In the 1984 shoot, the fingers are slightly bent, while the 1985 shot features an outstretched hand.

The shoe brand with the Jumpman logo became an incredible success almost immediately after introducing the Air Jordan symbol. The design, though simple, is easy to recognize, and it’s clear to see exactly who the silhouette is supposed to represent.

Notably, a version of the Air Jordan shoe logo features a wordmark, but it’s uncommon to see this additional element. When the wordmark is present, it’s depicted in a simple sans-serif font with squared edges.

The Jordan wordmark is spaced to look wide and broad, giving a sense of confidence to the brand. All the characters are also in uppercase, which helps highlight the brand’s strength.

The Jordan symbol or Jumpman logo is definitely one of the more unusual logos in the athletic industry. Most sneaker companies and similar brands are better known for using symbols and simple geometric shapes for their logos, and many also consistently use a wordmark.

By choosing the silhouette of an actual person as the basis of its logo, the Air Jordan company easily differentiates itself from other brands in its industry. The logo is simple enough to work well on a range of clothing materials and products but detailed enough to be instantly recognizable.

Though many people argue the photo the drawing is based on was staged, it’s an excellent representation of the strength, energy, and vitality Michael Jordan is known for showing in his sport.

The shape of the man’s movement is perfect for conveying determination and drive. The overall image also highlights Michael’s distinct and upbeat personality.

What color is the Air Jordan logo?

The black Jordan logo is the most commonly recognized variation in circulation today. However, it’s worth noting Air Jordan logo colors can change depending on the product being sold.

Like many shoe companies and fashion designers, Air Jordan isn’t opposed to changing the color of its logo for different products.

While the official air Jordan color palette is usually just black and white, there’s a good chance you’ve seen variations of this logo in red, blue, and many other colors.

What font does the Air Jordan logo use?

It’s uncommon to see the Air Jordan logo font on today’s products or branding. Most of the time, the company relies on the Jumpman logo to identify the brand instead. However, when the font is evident on the Air Jordan logo, it’s often a simple, sans-serif typeface written in blocky, squared letters.

The font design is intended to enhance the overall strength and impact of the logo itself. The wordmark’s confidence matches the energy and drive of the Jumpman image.

Jordan logo history is an exciting insight into how Nike built on a robust partnership with a superstar to create an entirely new brand. The Air Jordan logo today is one of the most recognizable in the athletic industry and an excellent insight into how diverse company symbols can be.

Though quite a bit more complex than some of the other athletic company logos today, the Michael Jordan logo immediately impacts anyone who sees it. This image has become a highly sought-after seal of approval for many shoe fans.