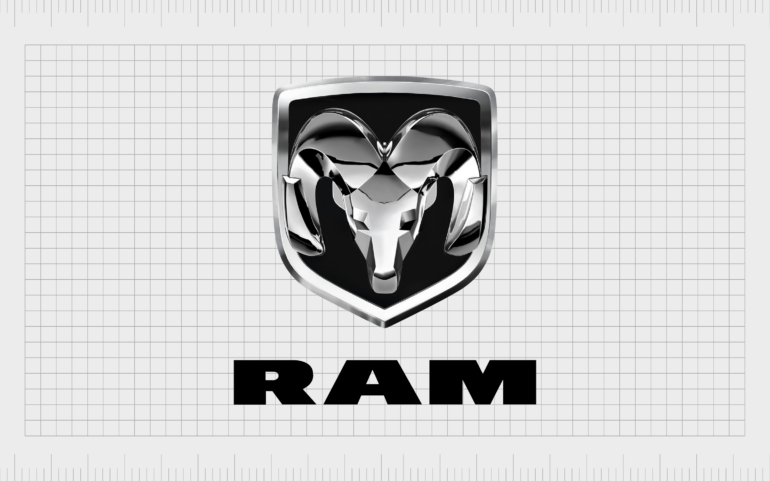 Few automotive emblems have the same immediate impact as the Ram logo. Though it started as one of the many badges used for the official Dodge company vehicles, the Dodge Ram logo has since evolved into an identity of its own.

Today, the iconic Ram Trucks logo helps to differentiate this sub-brand of the Dodge organization from the rest, conveying an instant sense of strength and durability.

Building on a heritage of countless automotive logos associated with animals, the Dodge Ram logo embodies the spirit and characteristics of the creature itself.

You’re in the right place whether you’ve always been a fan of the famous Ram logo or you’d simply like to know a little more about where this iconic emblem came from. Here’s your guide to the Dodge Ram logo and its history.

Ram trucks, formerly the Ram Trucks Division, is a dedicated American brand that spun off from the Dodge company in 2010. The American company produces some of the world’s most popular light to mid-weight pickup trucks and commercial vehicles.

Though the Ram Trucks brand is relatively new to the automotive space, Ram’s head imagery dates back much further throughout the company’s history with the Dodge automotive company.

Before the 1970s, Dodge had a separate marque for its trucks under the “Fargo Trucks” brand, usually used for distribution outside the United States. After the 1970s, all of Chrysler’s trucks maintained the Dodge marque.

When Chrysler emerged from Chapter 11 bankruptcy, the company started introducing a range of new products focusing on quality and luxury. One memorable new vehicle was the “Ram,” while others included Dodge and Jeep. Each division eventually spun off in its own direction.

Ram history started within the Dodge company, where the Ram car logo was officially introduced in the 1970s. The Ram hood ornament was introduced on various models produced by the company, including heavy-duty trackers and pickup trucks.

According to some stories, Avard T. Fairbanks was initially responsible for producing the Ram radiator cap for the Chrysler company in the 1920s. The Ram was chosen as a symbol of authority, fearlessness, and force.

As the Ram’s head continued to appear on redesigned pickup trucks in the Doge line, the company and customers began referring to them as Dodge Ram trucks.

The Dodge Ram symbol is very similar to the flattened and simplified design of the Ram trucks logo most of us know today. This logo variation features a simple silhouette of a ram’s head placed within a shield border.

The overall emblem is depicted in a bright and vibrant red, with the word “Dodge” placed underneath a modern sans-serif font.

The Dodge Ram logo had a lot of impact as an automobile symbol. Though sometimes criticized for its similarity to the scientific image of a female reproductive system, it’s hard to ignore the passion and virality imposed by the Dodge Ram image.

When Ram eventually spun off to become its own brand, it maintained a lot of the elements of this logo to preserve its existing heritage and image.

In 2009, when Fiat acquired Chrysler, Ram became its own brand, though the company’s imagery had remained very similar to when it was sold under the Dodge company. Today, the Ram logo has two variations, one commonly used for branding and another for truck ornaments.

The Ram Trucks logo is a more textured version of the logo, featuring a large ram’s head design in silver metallic on a black shield background. The shield also has a shining silver border, highlighting the strength and luxury of the company.

The word “RAM” is placed alongside this Ram emblem in all capital letters.

The alternative variation of the Ram logo is the simplified version, featuring the Rams head in a flattened design, with no gradients or extra shading. The “RAM” wordmark is still portrayed in the same block capital letters, with no serifs.

The wordmark for the Ram logo can appear either underneath the Ram emblem, or alongside it, depending on the need of the branding asset.

Though the Ram logo may not have evolved as many times as some of the other automotive logos known throughout the world today, it remains powerfully modern, emotional, and engaging.

Today’s image evolved from the Ram car logo and the Dodge Ram symbol, created to convey a sense of strength and power.

The Ram is an animal often associated with force and fearlessness. While the Dodge company may have adopted a simpler logo over time, focusing primarily on its wordmark, Ram’s unique image has helped it stand out in an increasingly competitive industry.

What font is the Ram logo?

Although there are some arguments about the exact Ram logo font, most people agree it’s either the same as or similar to the “Optiflare” font.

The Ram logo font is a sans-serif block typeface written in all capital letters. Bold and aggressive, the design is the perfect match for the Ram’s head emblem, giving the company an overwhelming sense of confidence and strength.

The letters are perfectly spaced to make the short word look even longer and more intimidating.

The Ram logo wordmark can often appear either underneath the Ram emblem or alongside it, depending on the nature of the marketing or product.

The Ram logo color palette falls into one of two options. The most significant primary logo uses a white, black, and silver palette. This design’s silver coloring features several shades and shadows to create a shiny metallic effect.

The metallic impact of the Ram logo is an interesting choice for the company, as many other automotive brands have adopted a more straightforward design over the years. However, many believe this strong metallic gradient adds to the brand’s overall appeal.

Ram also has a variation of its logo made for the flat logo design trend. This variation features black and white colors, demonstrating concepts like purity, simplicity, and sophistication.

The Ram logo may not be the oldest design in the automotive industry, but it’s one of the most eye-catching. Today, this stunning symbol is one of the most robust designs for any pickup truck or car brand. The Ram’s head has become an iconic symbol of strength, thanks to Ram.

The Ram company has created a timeless and powerful visual identity with careful use of imagery matched with the perfect typeface styling choice.

Though the image started as a badge on Dodge vehicles, it was powerful enough to maintain the attention of countless customers as Ram spun away from its parent brand and became a company in its own right.