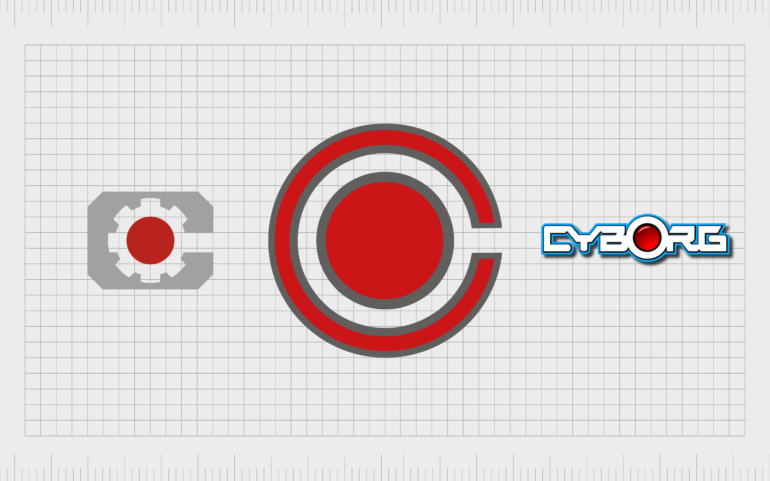 How much do you know about the Cyborg logo? Not quite as pervasive as some of the other superhero emblems known throughout the world today, Cyborg’s logo has seen very few changes over the years.

The Cyborg logo, often placed alongside the images for other characters taken from the DC Universe, like Batman and Superman, belongs to an iconic character in the Justice League.

Though relatively simple in its design, the official cyborg emblem is an excellent insight into how impactful the right imagery can be for a comic book character.

Whether you’re fan of DC Comics, Cyborg himself, or you simply want to learn more about the nuances of logo design, read on… Today, we’re going to be telling you everything you need to know about the Cyborg logo.

Let’s start with an insight into the original Cyborg logo, and where the image came from.

Cyborg is probably best-known today as a part of the Justice League, a group of superheroes usually accompanied by the likes of Aquaman, Wonderwoman, and Batman. For comic book fans, however, Cyborg has a fantastic and compelling story of his own.

Victor Stone is a character created by Marv Wolfman and George Perez, who appeared in the DC Comics Presents series in 1980. He was originally known as a member of the Teen Titans, and became a founding member of the Justice League in the 2011 DC Reboot.

The original Cyborg logo is difficult to find, as the character rarely had a significant amount of merchandise available in early years. However, the most common image of the Cyborg symbol includes a “C” designed to look like a gear, with a red circle in the middle.

This design highlights the unique nature of Cyborg’s character. Victor Stone is a man with a number of unique robotic components throughout his body.

The robotic parts give him super strength and speed, as well as the ability to create various weapons. The red circle is a reference to Cyborg’s one robotic eye, which often glows red.

Cyborg symbols through the years

Over the years, there have been numerous images commonly associated with Cyborg. However, the character rarely showcases a logo in the same way as other superheroes.

While characters like Batman and Superman frequently wear their symbol on their chest, this generally wasn’t the case for Cyborg.

The character has had a few title cards and images linked to him when appearing on television series and in cartoons or games throughout the DC Multiverse. However, the most distinctive logo is the image of the gear-style “C” with the red circle in the middle.

Unfortunately, there isn’t any clear information available about who created this original Cyborg symbol, or who designed the various Cyborg emblems used throughout the comic books.

Does Cyborg have a logo?

Due to the lack of any official Cyborg emblems placed on the character’s chest or outfits throughout the comic book series, many people assume Cyborg doesn’t have a logo of his own. However, there are various image associated with the character during his various appearances.

The end of the “Justice League” movie released in 2017 ended with Cyborg getting a new logo, in anticipation, perhaps, for upcoming cinematic releases.

The most recent, and best-known Cyborg symbol for many fans today was introduced at the end of the Justice League movie, in 2017. The original Cyborg logo isn’t really showcased in the movie, so you’d be forgiven for thinking he didn’t have a logo at all.

During the movie, Cyborg (Victor Stone) appears to grow more comfortable with the idea of being part-machine, part human. While tinkering with his robotic body and its appearance at the close of the movie, he decides to make a change, shaping a “C” with a glowing red orb in the middle.

The official Cyborg logo today, appearing on the various merchandised items for the character, as well as in the teasers for upcoming “Cyborg” movies, features this image. The design has a bold red circle in the middle, surrounded by a slight grey or metallic outline.

Around the glowing circle is a broad “C”, almost connecting to become a full circle. The “C” matches the color of the internal sphere. This builds on the original Cyborg logo, with its own bold red circle in the center of the design.

The Cyborg logo might be one of the lesser-known emblems in the DC landscape today, but this is likely to change as the character makes more of an impact in the Cinematic Universe. The arrival of a new logo is sure to help Victor highlight his unique personality in the space.

What color is the Cyborg logo?

The Cyborg logo colors haven’t changed much over the years. The character has always used a combination of grey and red to highlight metallic components, and Victor’s glowing eye.

The exact color codes for these hues aren’t available online, but we can see it’s a very bright shade of red, and a relatively subdued, metallic grey.

In most cases where the Cyborg logo is depicted, it’s also placed on top of a black background, perhaps to give it a greater impact. However, it’s also possible to show this logo on any other background.

Here are some resources to give you a closer look at the Cyborg logo.

What font does the Cyborg logo use?

There’s no specific font or typeface for the Cyborg logo, as the character doesn’t actually use a wordmark. However, there is a single “C” shape in the image. This is a unique design created specifically for the character, using a very slim sans-serif type.

The “C” image is unique because it looks as though it’s almost about to connect into a secondary circle around the main sphere in the image.

The Cyborg logo might not be as well-known as the Superman or Batman logo, but it’s quickly gaining more attention in the comic book landscape. As the DC Multiverse continues to grow, and more movies and shows are introduced, this logo will likely gain more attention.

Though simple, Cyborg’s logo is a great insight into how simple shapes and designs can easily convey the entire nature of a character, and what makes them unique.

You can find a wide range of other Logofiles here on the Fabrik website, to teach you more about the impact the right emblem can have.