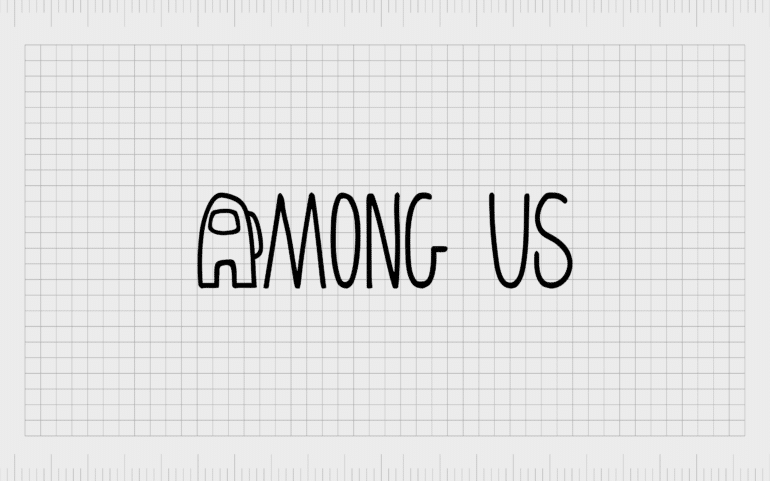 Among Us logo: A guide to the Among Us symbol

Everything you need to know about the Among Us icon.

You don’t have to be a dedicated gamer to be familiar with the Among Us logo these days. Half brand icon, half lovable mascot, the Among Us symbol is almost as popular as the game itself, appearing on everything from home accessories to apparel.

Like the gaming empires before it, from Fortnite to Pokémon, Among Us has cultivated an almost cult-like following. There are plenty of reasons why people love both the game and its visual image today – it’s fun, colorful, and just a little bit cheeky.

Whether you’re a fan of Among Us, or you’re feeling “sus” about the whole thing, we’re here to share everything you need to know about the visual identity of this chart-topping game.

About Among Us (overview)

Before we take a closer look at the elements making up the Among Us icon, let’s begin with a quick overview of the brand. For those who aren’t sure, Among Us a multiplayer cross-platform game created by the USA-based Innersloth Studio.

Though somewhat simple in concept, the game boasts endless playability, by taking advantage of the unique relationships between friends and co-players.

Released in 2018, Among Us was inspired by Sci-Fi movie “The Thing”, and the classic deduction game “Mafia”. Players are asked to carry out a series of tasks during a set time limit.

While the majority of the players are working together as “crewmates”, one or two other players will be sabotaging their work. The aim of the game as a crewmate, is to find the saboteurs and get rid of them.

If you’re a saboteur, the aim is to kill your friends, and stop them from completing their tasks.

The primary Among Us icon is based on the character in the game, who also happens to look quite a bit like the capital letter “A”.

Designed without any evident arms when standing still, the Among Us character seems to be in a non-descript space suit, ideal for the environment where the game takes place.

The Among Us logo: The key elements

The Among Us logo is comprised of two visual assets. The first is the logo most people know from the game on the PC. The Among Us black and white icon is a wordmark, using an almost hand-drawn sans-serif font and an illustration of the main Among Us character.

This simple design was introduced in 2018 along with the game, which only had a single level to play on at first. Though the game didn’t earn much popularity at first, its rise to fame was initiated by several YouTube and Twitch personalities playing the game.

Once customers started to fall in love with the game, and the characters in it, it made sense to keep the Among Us mascot within the brand logo.

As a digital game on smartphones and consoles, the Among Us icon you might see on your Switch or Android phone is likely to be different to the primary logo. This pared-down icon is designed to fit well on smaller screens and uses just a single image of one of the Among Us characters

Among Us color scheme

The Among Us colors may differ depending on who you ask. Most people associate the mobile and game icon with the colors black, grey, blue, red, and white.

However, the Among Us wordmark features only black and white.

Among Us logo font

The Among Us font is a simple, custom font in a hand-drawn style. The fun, childlike nature of the typography helps to highlight the appeal of the game.

How to draw Among Us symbol

The popularity of the Among Us logo among children has prompted the search for all kinds of Among Us-themed activities for youngsters, particularly during child parties and lockdown weekends.

You can find Among Us outline templates online for kids to color in their free time, or practice drawing a cool Among Us symbol and logo yourself.

Thanks to the use of very simple shapes and typography, drawing the Among Us logo is surprisingly easy. You can find Among Us tutorial guides on YouTube, like this one, for people who want to draw the logo:

Alternatively, you can also learn how to create characters, or replicate the Among Us “Shhh screen” if you’re looking to build out your Among Us drawings. The Among Us Shhh sign features a red Among Us character holding his finger against his mouth.

If you can’t find Among Us pictures to draw online, you can try copying the design from the Among Us logo you see in the game.

Start with an upside-down ‘U’, or the start of an ‘A’ (without the cross in the middle) and curve the bottom legs of the ‘U’ up to create the characters legs. Connect the legs in the middle with a straight line – the legs should be pretty short compared to the rest of the body.

If you want more professional versions of the Among Us logo or icon, try these:

The popularity of the Among Us logo

The Among Us logo is one of the most popular game symbols we’ve seen in quite some time. These days, it feels like you can’t go anywhere without seeing countless Among Us stickers, backpacks, and plush toys lining the shelves of every store.

Part of what makes the Among Us logo so appealing is its direct connection with the characters in the game itself. If you fall in love with the little characters you play as, you’re sure to love the logo too.

Among Us even helps you to build a connection with the characters you use, by allowing you to customize them. You can find custom versions in the form of toys and models today too.

The love of the Among Us logo has sparked the arrival of countless now branded items for fans, including colored lamps, and even books written about the characters in the game.

The Among Us logo is an excellent example of how a wordmark and mascot can work together to make a brand more emotionally captivating.