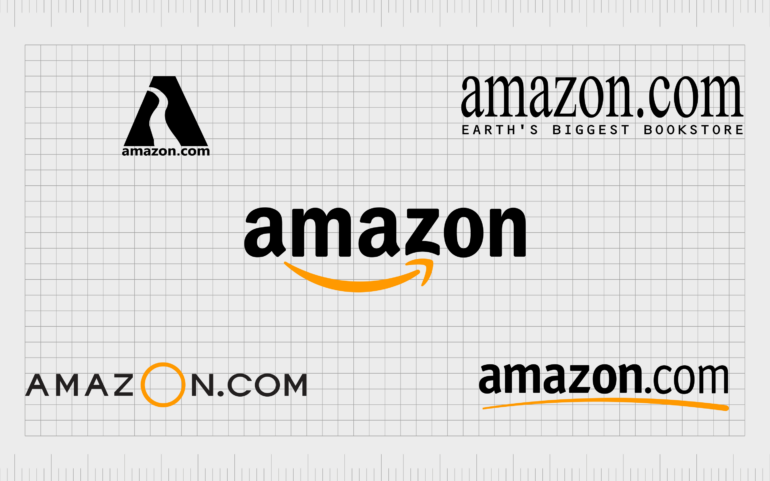 What does the Amazon logo stand for?

How much do you know about Amazon logo? Today, we’re going to answer the question “what does the Amazon logo stand for?” and bring you the intriguing story of this famous brand logo. Let’s get started!

It’s hard to find anyone who isn’t familiar with Amazon these days. From humble beginnings as a digital bookstore in 1994, to one of the world’s top 5 digital brands, Amazon has come a long way.

While there are many things making Amazon special, one of the most memorable of all is the company’s logo. But, where did it come from?

The Amazon logo is an excellent example of how brands can use simple shapes and designs to connect with customers on an emotional level. Unlike many other brands, this symbol hasn’t changed much over the last few years.

But the Amazon logo hasn’t always been the emblem most customers know today.

Let’s take a quick look at the history of Amazon, and its logo…

How long has Amazon been around?

Before we answer the question, “what does the Amazon logo stand for?” let’s take a quick look at the company behind the symbol.

The history of Amazon goes back to 1994, when Jeff Bezos came up with the idea to sell books online from his garage.

The company quickly evolved, starting to sell a host of new products, from electronics and clothing to groceries and software. Eventually, Amazon turned into one of the world’s first true online marketplaces.

Today, it remains the number one choice for customers in search of quick delivery and access to a versatile selection of products.

The initial purpose of Amazon is why the some of the first iterations of the logo for Amazon included slogans like “The world’s biggest bookstore”.

The old Amazon logo first created for the brand was designed by a man called Turner Duckworth. Initially, the design for the Amazon company logo was very simple, a capital “A” or upside-down triangle with a river-shaped white mark running through the middle.

The initial design was intended to reference the image of the Amazon River, connecting various points throughout the world.

This Amazon emblem was simple enough to work well on a digital site, and came with the name amazon.com written underneath, to show customers where to visit. However, the original Amazon logo didn’t last very long.

By 1997, only a few years after the launch of the company, Duckworth recreated the logo with a more refined version, showing just the “amazon.com” wordmark, with the phrase “Earth’s biggest bookstore” written underneath.

Soon after, a similar version of the logo was introduced with a yellow circle replacing the “O” in Amazon. This was the first change to the Amazon company logo to begin introducing new colors into the brand image.

The yellow circle seemed to stand for the sun, highlighting the bright future of the Amazon marketplace.

The changes to Amazon’s logo happened quite quickly at the beginning of the company’s adventure into the digital world.

Jeff Bezos was always on-hand to approve new iterations of the design, including when his designer suggested switching the yellow circle in the logo to a refreshing orange curve underneath the amazon.com name.

In this version of the Amazon emblem, the slightly curved orange mark looked a lot like a rising sun coming up underneath the name, maintaining the same theme as the previous logo. The letters of the name were also returned to lowercase, making them more appealing to today’s audience.

The word “Amazon” here was also highlighted in bold, placing the name of the company ahead of the .com URL. It wasn’t until the year 2000 when the company started experimenting with the design again, introducing the first version of the Amazon smile logo.

The Amazon smile logo and meaning

The Amazon Smile is now one of the most recognizable logos in the world. This version of the Amazon emblem removed the “.com” part of the name entirely, embracing a future where people were comfortable finding online sites on the web.

Turner discovered the smile logo by turning the curve upside down, and using it as a kind of arrow, pointing from A to Z.

The curved point of the arrow also influences the shape of the letter “Z”, making it look like the dimple in a smiling cheek.

When the new style was introduced, Jeff Bezos didn’t want to pay for any additional branding, but Turney suggested only using the smile as the design element on boxes, to make them more iconic, and cheaper to produce.

Amazon’s logo is one of the most iconic in the world because of its underlying meanings. The curvy orange line underneath the company name is intended to look like a smile, creating the idea of happy customers and dedicated clients.

Amazon’s smile is now just as recognizable as the name of the company, without the need for any further branding.

The orange color of the arrow helps to enhance the warm and friendly vibes of the company. At the same time, the curved line deliberately connects the letters “A” and “Z” in Amazon, to represent a company selling all kinds of products, from A to Z.

Why did Amazon change their app logo? and other questions

Amazon’s smile logo has formed the basis of multiple Amazon assets over the years. It’s used alongside the “Amazon Prime” logo, to represent the unique subscription service the company offers for next-day delivery and entertainment.

The word “Prime”, in italic blue letters conveys a sense of reliability and quality alongside the original Amazon emblem.

Amazon’s smile also became the basis of the company’s app logo. You can probably see why Amazon would want to use the smile by itself as the logo for its app, as the word “Amazon” is a little too long for a tiny icon.

However, the image has changed slightly over the years.

The first Amazon app logo had a jagged blue piece of tape above the smile, which many customers said reminded them of the moustache of a certain German dictator. The blue mark was supposed to look like tape from a box, but it caused a lot of upheaval.

Modifying the design slightly allowed Amazon to remove itself from these associations.

The Amazon logo emblem is best recognized by the distinctive smiling arrow. The unique design, which simultaneously evokes the ideas of a happy, smiling customer, and reminds you of the diversity of the company’s product collection is a fantastic feat of branding.

Amazon hasn’t changed its logo since the redesign, and it’s easy to see why.

The most commonly known features of the Amazon logo include:

The Amazon logo arrow pointing from the A to the Z in the name of the company is the most iconic feature of the emblem. This arrow is slightly curved, and bold enough to look like a mouth with a fun dimple on the end.

The original Amazon logo colors were simply black and white. As the company evolved and the brand looked for ways to become brighter and more-friendly, it adopted the bright orange shading.

Amazon also uses the color blue in Amazon Prime logos, and on the Amazon app logo

According to experts, the font used for the Amazon logo is sans serif Officina sans bold. There are a couple of changes to this font type, however. For instance, the curved bottom of the Z is unique to Amazon.

Whether you’re a fan of the company or not, it’s difficult to deny the impact of the Amazon logo emblem. Today, everyone is familiar with the unique arrow linking A to Z in the Amazon icon.

Amazon’s smile has also influenced various parts of the company’s growth. For instance, the company has the Smile Charitable Program responsible for donating money to various crucial organizations around the world.

Amazon’s smile logo even explains the slogan, “work hard, have fun, make history”, with the orange grin creating the idea of a forward-thinking, happy company.

Don’t forget to check out some of our other logo articles to learn more about the iconic emblems shaping the world today.