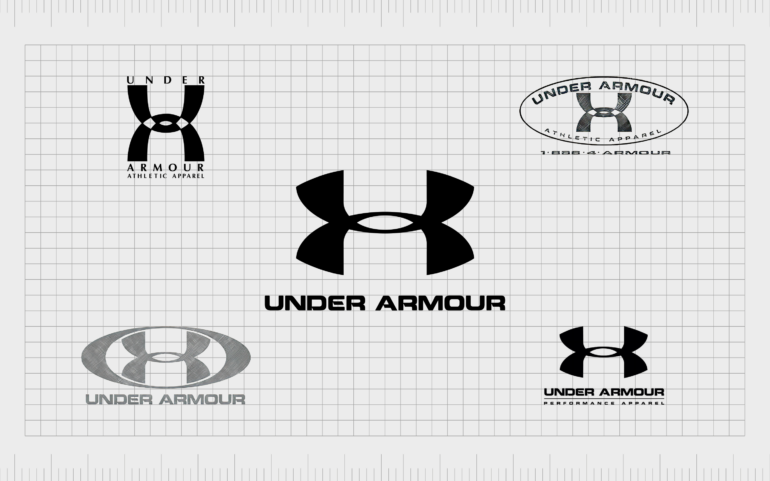 Are you familiar with the Under Armour logo history? Today, the Under Armour symbol is one of the most recognizable worldwide, thanks to the company’s incredible popularity and growth. Since 1996, the athletic apparel company has captured the hearts and minds of gym enthusiasts and everyday athletes.

Though simple, the Under Armour logo significantly impacts the brand’s overall image and personality. With the Under Armour emblem, the company has evolved to compete with athletic giants like Nike, Adidas, and Puma.

So, what exactly does the Under Armour logo mean, and where did it come from?

Join us on our journey into Under Armour’s history to learn more about this incredible company and its memorable brand image.

A leading American sports equipment and athletic apparel company, Under Armour first launched in 1996 and has been growing ever since. Today, the company has stores worldwide and even sponsors several leading athletes and sports teams.

Kevin Plank, a 24-year-old special teams captain for the University of Maryland Football club, started his new company from his grandmother’s basement in Washington.

Initially, the Under Armour garments were sold entirely from Kevin’s car’s trunk as he traveled along the East Coast trying to sell his wares.

According to Kevin, when performing as a fullback for the University of Maryland, he often got tired of having to change out of sweat-soaked T-shirts regularly.

However, he noticed his compression shorts often stayed dry during practice. This discovery inspired him to create a T-shirt using a moisture-wicking fabric to reduce sweat.

When creating the name for his new company, Plank chose the British spelling for “Armour” because a toll-free vanity number was still available.

What does the Under Armour symbol mean?

The Under Armour logo meaning is simple enough. Like many of the top logos throughout the world today, the Under Armour symbol was created based on the name of the brand.

Interestingly, the name “Under Armour” is said to have been something of an accident for the company. Initially, when Kevin was discussing name ideas with his brother, Bill, he mentioned perhaps calling his company “Body Armour”.

However, Bill misheard him and thought he said, “Under Armour”, which eventually stuck as the official moniker.

The logo was designed soon after choosing the official name, combining the letters “U” and A” from “Under Armour” into a simple shape.

What does Under Armour symbolize?

The Under Armour logo is simply an overlapping “U” and “A,” created to look like two curved lines connecting – perhaps like the links in a chain. Some people also believe the design is reminiscent of a person holding their arms up in victory.

Is the Under Armour logo an H?

At first glance, you’d be forgiven for thinking the Under Armour logo was an H. However, the design is actually made up of the first letters of each part of the company’s name.

The design uses the same “U” shape placed one over the other, so the upper portion of the symbol looks like a U, and the lower part looks closer to an “A.”

What does the Under Armour slogan mean?

The Under Armour slogan is “The Only Way is Through.” This means the only way to keep going forward is to push yourself through any challenges coming your way. The slogan conveys a sense of hope and motivation, making people keep going forward and avoid going back.

The main element of the Under Armour symbol, featuring the overlapping A and U characters, has always been a component of the brand’s identity. However, the exact image and the logotype have changed slightly throughout the years.

When the Under Armour logos began in 1996, it was with a highly sophisticated and stylish version of the design we know today. The first Under Armour emblem was a narrower version of the overlapping U and A, with a symbol in the connecting point between the two letters.

The wordmark in this design was a bold sans-serif font, with significant space between each letter. The words “Athletic Apparel” also appeared at the bottom of the symbol.

In 1997, the Under Armour logo became broader and closer to the image we know today. The design was stretched into an oval badge, with the primary wordmark on top, this time in a thicker, square-style font.

The Athletic Apparel wordmark was still present on this design, along with the vanity number for the company. However, in 1998, Under Armour removed these additional components and simplified the logo.

The design between the U and A was removed, and the oval around the shape became much bolder. The company also moved the wordmark to the bottom of the symbol.

In 1999, Under Armour replaced its grey logo with a much darker black-and-white design.

The smooth and stylish emblem was retained but refined, and the blocky font was enhanced too. The company added the phrase “Performance Apparel” underneath the brand’s name, separated by a horizontal line.

In 2005, the new symbol for the Under Armour brand was introduced. This was similar to the previous design, but the “Performance Apparel” tagline disappeared. The iconic emblem remained alongside a blocky sans-serif font.

The current Under Armour logo has remained with the company for several years now, creating a highly sophisticated, powerful, and confident image for the brand. The use of black and white as a color palette is popular among clothing companies because it’s highly versatile.

The unique emblem, created using the letters from the front of the two parts of the brand’s name, helps to differentiate the company from its competitors.

Here are some handy resources for anyone interested in the Under Armour logo:

What font does the Under Armour logo use?

The Under Armour logo font is a unique typeface specifically designed for the athletic and sports company. This custom font is a highly legible sans-serif design intended to demonstrate the company’s and its products’ strength and durability.

The font for Under Armour stands out thanks to its blocky, angular appearance, which helps to convey modernity and sophistication. There are elements where the letters look as though they’ve been cut, demonstrating a sense of ruggedness.

What color is the Under Armour logo?

Several Under Armour logo colors are depicted on the various products created by the brand.

However, the primary Under Armour logo color is black on a white background. Like many sporting, athletics, and fashion companies, Under Armour often experiments with its color choices when producing different products and packaging.

Celebrating the Under Armour logo today

The Under Armour logo is one of the most recognizable images in the sporting landscape, ranking alongside leaders like Nike and Adidas. Though this company might have a different heritage than some of the much older sports companies we’ve looked at before, it still has a significant impact.

The Under Armour logo is one of strength, confidence, and power. It’s a bold and engaging image, excellent for motivating viewers.