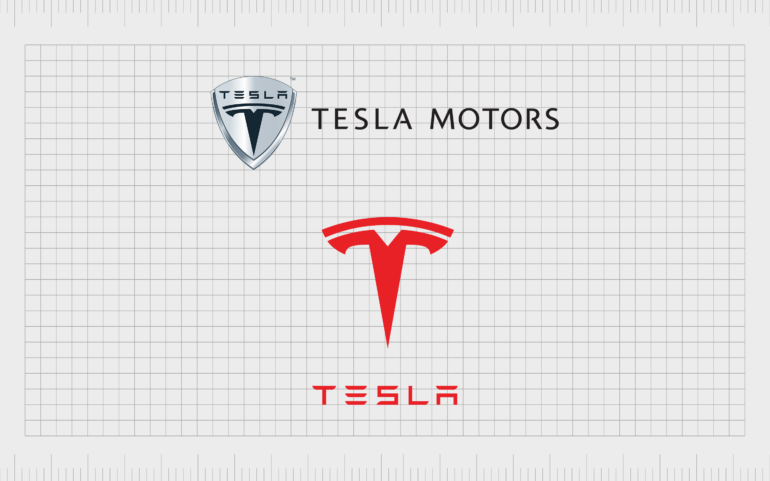 Tesla logo history: What does the Tesla symbol mean?

Tesla logo history is still in the process of being written. This relatively new company has yet to make numerous changes to its visual identity. However, looking closely at the Tesla logo gives us an excellent insight into the company and its values.

The Tesla logo is rapidly becoming one of the most recognizable in the automotive space, often associated with concepts like creativity, innovation, and cutting-edge technology.

At the time of writing, Tesla has used the same logo since its inception. The combination mark featuring the Tesla “T” design and the wordmark can also separate to distinguish the company on various marketing and branding assets.

Let’s take a closer look at the Tesla logo.

Before we take a deeper look at the Tesla logo meaning and defining elements, let’s examine the history of the Tesla company. Most people associate Tesla with the eccentric innovator Elon Musk, but Martin Eberhard and Marc Tarpenning in 2003 actually incorporated Tesla.

Inspired by the quest to create a sustainable electric vehicle, Martin and Marc established Tesla Motors as both an automotive company and a “technology company.”

Elon Musk joined the chairman of Tesla’s board of directors in 2004 after providing a $6.5 million investment for the company following the sale of PayPal. Later, Elon gradually became the largest shareholder of Tesla and now identifies himself as a co-founder.

The journey from an unknown company to an industry innovator was rapid for Tesla. The company began by producing the Tesla Roadster, a high-end electric sportscar created with significant input from Elon Musk.

This car quickly won the Global Green product design award and the Index Award, inspiring an influx of new designs.

Over the years, Tesla has maintained its identity as both an automotive and technology company, investing in new innovative creations and inventions to transform its cars.

Tesla logo history: What is the Tesla symbol?

The same Tesla symbol has identified the company since its inception, although different design variations are evident in various branding assets. For instance, you may see logo versions where the word mark is situated above or below the “T” Tesla symbol.

While the initial design placed the combination mark within a shield, the company quickly updated this image to feature a stylistic “T” and a unique wordmark.

The Tesla logo is intended to be modern and futuristic, similar to the company itself. Tesla is one of the biggest brands in the world for electric motors, so its logo must be both powerful and accessible.

The design in use today highlights the futuristic and edgy image of the company while still conveying ideas of strength and consistency.

What does the Tesla logo mean? Tesla symbol meaning

At a glance, the Tesla logo doesn’t look like it has any specific meaning. The design combines a “T” shape, which we could connect to the name “Tesla,” with the company’s name written in an almost digital block-style font.

Notably, investigations into the inspiration behind the Tesla logo reveal more to this symbol than most people realize.

According to RO Studios and the Tesla brand, the “T” is a reference to the company’s products, which were designed using electronic theories created by Nikolas Tesla himself. The “T” resembles a cross-section of an electric motor.

The main body of the Tesla symbol represents one of the poles protruding from the motor rotor, while the second line on top represents part of the stator. For a long time, the connection between the design of electric motors and the Tesla logo was only theorized.

However, after a man called Peter James Dean tweeted at Elon Musk, asking for an explanation of the logo’s meaning, Elon confirmed what the image stood for.

The decision to take inspiration for the Tesla symbol from a cross-section of an electric motor also helps to create a connection between Elon’s various brands. Space X also references its technology in its logo (showing a rocket trajectory).

Aside from being a clear tribute to Nikola Tesla, and a reference to the technology created by the Tesla brand, the Tesla logo is intended to look futuristic and innovative, highlighting the brand’s vision.

This image is also powerful and luxurious – great for a company responsible for selling slightly more expensive, technology-focused cars.

Unlike many car companies, Tesla has yet to make many changes to its logo design over the years. The main change made by the company involved removing the initial “shield” shape around the “T” symbol and updating the typography to look a little more futuristic.

Fortunately, Tesla didn’t need much trial and error to create the perfect symbol. The logo today is instantly recognizable and wonderfully suggestive.

Even if you don’t know the “T” is a section from an electric motor, the edgy shape combined with the modern typeface lets you know you’re dealing with a stylish and innovative company.

What font is the Tesla logo?

Tesla’s logo font is one of the most compelling features of the company’s emblem. The design is minimalistic, missing certain parts of letters, like the vertical lines from the E and A of the brand name.

This helps to create a more modern and rugged appearance, ideal for a forward-thinking brand.

The use of multiple lines to build the glyphs within the Tesla logo also reminds me of the electrical cables and currents used within the car’s design and other mechanical concepts. You could easily see the “E” as a vent on the front of a car.

When combined with the iconic Tesla symbol, the Tesla font helps us immediately understand the brand’s nature.

Tesla uses several different colors when highlighting its brand identity. It’s common to see the Tesla wordmark and symbol depicted in a simple black-and-white shade. However, there are also variations of the logo, which use a bright, eye-catching red.

Black and white in logo design are often associated with modernity, power, and luxury, making them an excellent choice for the identity the Tesla brand is striving to create.

Alternatively, red is a color we often associate with passion, making it an excellent pick for a company that desires to change the way we look at the automotive industry.

The shade of red used in the Tesla logo is:

Tesla logo history only goes back a little, but what we do know about the Tesla logo provides some excellent insights into the brand. The Tesla symbol is one of the most memorable and eye-catching in the automotive landscape.

This unique logo immediately highlights the modern and innovative nature of the brand and hints at its background.

The hidden meaning behind the Tesla logo gives the image more appeal, reminding us of the incredible scientist who inspired the company’s growth.