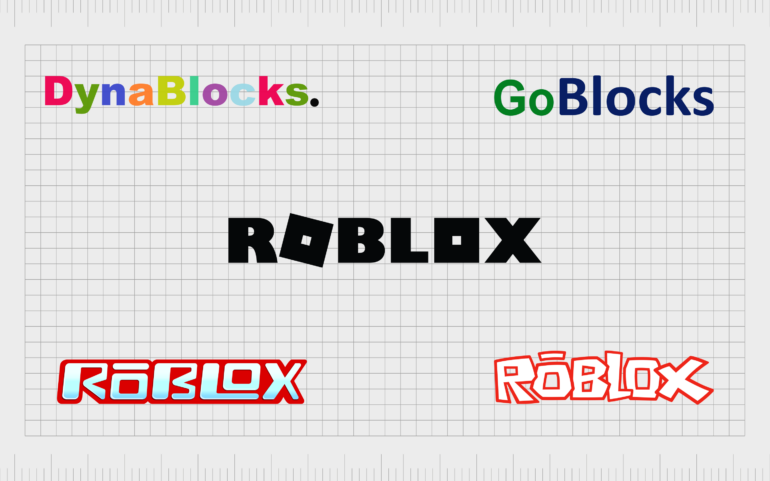 Do you know your Roblox logo history? Roblox is one of the better-known games in the world, with a logo people can instantly recognize wherever they live. So where did the Roblox symbol come from?

The game creation system and platform “Roblox” originally emerged in 2006, after Erik Cassel and David Baszucki came up with the idea in 2004.

Though the Roblox symbol and the game behind it have been earning increasing levels of attention over the years, the demand for the title skyrocketed during the pandemic.

Here’s your comprehensive guide to the Roblox icon…

The Roblox icon: What was the original name of Roblox?

Let’s start our exploration of Roblox logos by exploring where the title first began. The Roblox logo evolution started with the title “DynaBlocks”, originally chosen by the team in 2004. However, the name changed to “Roblox” before the first official logo was introduced.

According to some professionals, there were also other variations of the Roblox name before DynaBlocks too. The “Interactive Physics” name and logo belonged to the company long before Roblox was created.

In 2003, there was also “GoBlocks”, a name which likely helped to inspire the ultimate choice for the game’s title.

Though the DynaBlocks name never had a fully “official” logo connected to the Roblox name, there was a version of the emblem available for the website, which featured a bold sans-serif inscription in a variety of colors.

This multi-colored image may have inspired the first Roblox logo.

The Roblox icon became more than just a symbol of the company. The icon represented a vastly growing community of creative people. As such, Roblox always seemed to focus on fun and playful logos which highlighted the dynamic nature of the ecosystem.

The logo today is in black and white, demonstrating innovation and sophistication, but it has also had a lot of iterations in red over the years, perhaps to highlight the “passion” in the game.

The search for a cool Roblox logo to share with a growing community took some time for the Roblox team. There are a number of Roblox icons associated with the game which have emerged over the years.

Let’s take a look at some Roblox symbols…

The original Roblox logo was introduced during 2004, with a shadowed sans-serif inscription in the title case, with each letter demonstrating a particular shade. The old Roblox logo looks very similar to the DynaBlocks logo.

According to the team, the new name was chosen to be easier to remember.

The next version of the Roblox logo appeared in 2005. The new Roblox symbol was a major redesign, with a striking red outline and an accent over the “O”.

Though a little old-fashioned by today’s standards, the design was instantly engaging and memorable. It helped to inspire the logos for Roblox for years to come.

In 2006, the Roblox icon updated again. Unlike the other Roblox symbols, this new logo was a lot more playful and kid-friendly. The change of the Roblox font made the word appear to jump around on the page, perhaps in an attempt to attract younger players.

This is one of the old Roblox logos which stayed with the company for a decent amount of time. There was a slight redesign of the symbol during 2015, wherein the outlines of the Roblox icon wordmark were thickened slightly.

However, there was no major update until 2017.

The old Roblox logos transformed once again in 2017, this time taking on a new style of font. The Roblox logo from 2017 is very similar to the one most players know today. The blocky letters represent the building blocks of the unique creative world.

According to David Baszucki, the new logo was a testament to the cross-platform vision of the company, and the brand’s commitment to help power imaginations around the world.

This version of the logo, in a bright shade of red, sometimes featured the “Powering Imagination” tagline too.

Roblox is more than just a game platform; it’s a community environment, with some of the most passionate creators in the world logging in on a daily basis. The Roblox logo, with multiple redesigns over the years, has caused some commotion among fans from time to time.

However, most people are quite comfortable with the Roblox symbol today.

Part of what makes Roblox’s logo so memorable, is the committed community. The Roblox ecosystem has everything from award ceremonies to Easter Egg hunts, all designed to keep people engaged and involved with the landscape.

The Roblox space has also played host to various virtual concerts during the pandemic and holds various promotions for leading films.

The primary element of the Roblox logo today is the word mark, with its slightly angled first “O”, and highly geometric design. The image aims to convey both a sense of structure, and flexibility, perfect for a community of developers.

Here are some handy resources for anyone interested in the Roblox logo:

Currently, Roblox is in direct competition with Minecraft for the number one position in the MMOG gaming category. What makes the game special is its ability to stand not just as a game, but a game-building environment.

Roblox is an extremely flexible game, and one committed to supporting all kinds of creativity. As such, the company primarily has a black and white logo, but allows community creators to design their own alternatives too.

You can find all kinds of different shades including:

The black Roblox logo and the white Roblox logo (inverted) are the most common versions of the icons. Notably, the red Roblox logo was the most frequently used image for the brand for some time before black became the primary color.

The red and white logo was intended to look bright and vibrant, while the black logo highlights the heritage of the game, while encouraging other creators to make their own mark on the design.

The Roblox logo font, like many of the game and company fonts we look at on this website, was designed from scratch.

The entire typography is designed to be blocky and eye-catching, with a lot of geometric angles to explore. The first “O” in Roblox is intended to be slightly tilted on its axis towards the right.

The decision to tilt the box-like “O” towards the right may have been to suggest the forward-thinking nature of the Roblox community.

Currently one of the best-known logos in the world, the Roblox icon is popular across the globe, and surprisingly effective, despite its simplicity.

Roblox continues to be one of the better-known names in the gaming environment, and the landscape is always in competition with other building games, like Minecraft.

If you’d like to learn more about the history of iconic gaming logos, make sure you check out other Logofiles on Brand Fabrik.