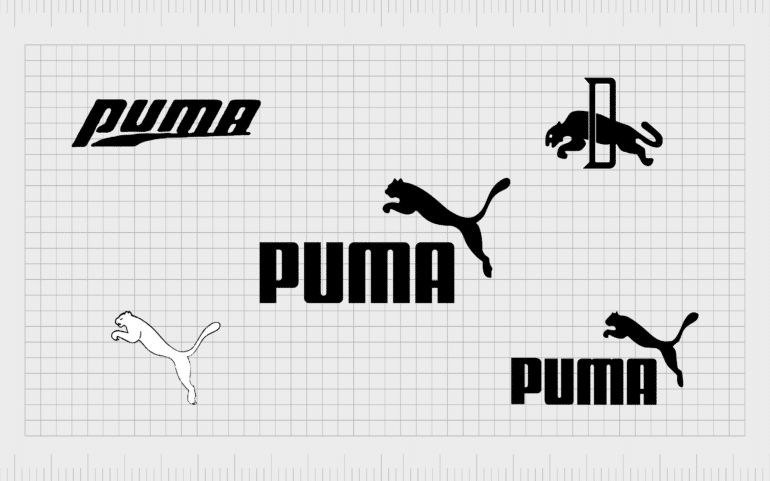 Celebrating the story of the Puma symbol.

How much do you know about Puma logo history? The Puma symbol today is one of the better-known emblems of the sportswear market. However, the image you know now hasn’t always been the one associated with the Puma brand.

Puma’s logo, like many of the popular brand marks in the world today, has evolved to suit the changing expectations of a rapidly-growing audience.

Now, Puma’s image appears not just on the branding and marketing campaigns for the company, but on countless pieces of apparel too, from sports shoes to shirts.

If you’ve ever wondered where the Puma logo began or how the old Puma logo transformed to become the eye-catching emblem we know today, you’re in the right place.

Here’s everything you need to know about the Puma symbol…

Puma is currently one of the largest sporting goods manufacturers in the world, competing with companies like Adidas and Nike. The brand first appeared in 1948, when founder Rudolf Dassler created a new shoe factory.

Rudolf earned a massive following for his innovative products, as well as his use of a memorable logo with the iconic puma.

Though the Puma brand actually had a handful of names to begin with, the symbol of the puma animal was almost always a consistent component of the brand’s identity.

The Puma logo designer over the years has introduced countless variations of the brand’s image, some focusing more heavily on the animal element than others.

The original Puma logo was a slightly clunkier version of the image we know today, and many regarded an “unremarkable” design on behalf of the brand. Despite this, the image remained with the brand for several years, and helped to inform many of the later designs.

While various aspects of the Puma symbol have changed over the years, the leaping cat in the logo has long remained a strong part of the brand identity. 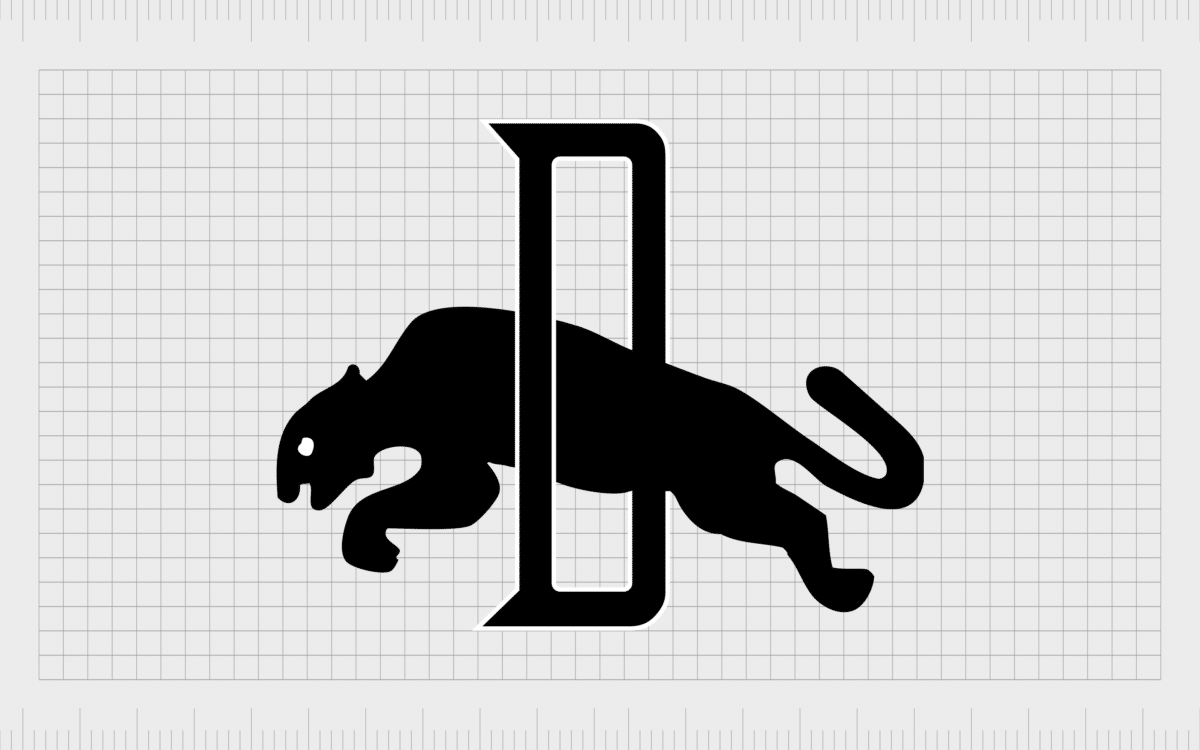 The original Puma logo was first introduced during 19487, at a similar time to the brand’s inception. The image featured a leaping cat jumping through the letter “D” which stood for the second name of the company’s founder, Rudolf Dassler.

Though this monochrome image was quite eye-catching at the time, it wasn’t quite the graceful image many of us associate with Puma today. The brand also created a reverse color version of the badge, which placed a white animal on a black hexagonal background. 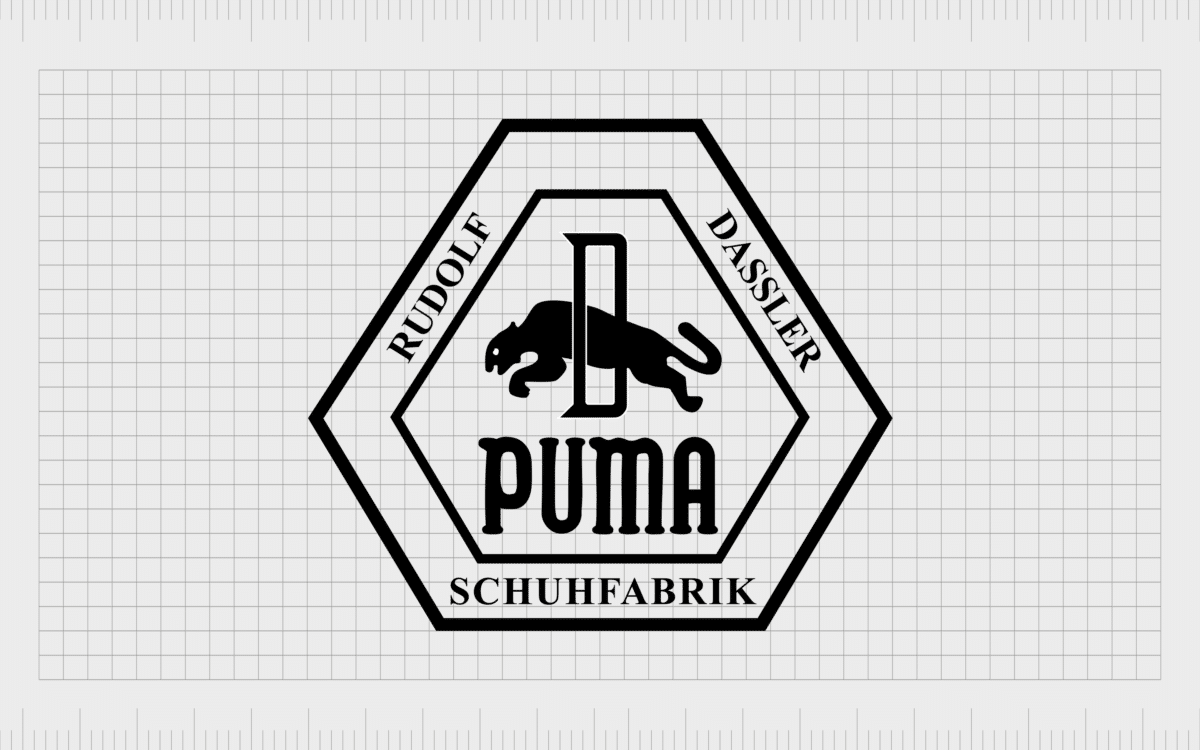 In 1951, an additional version of the Puma logo was introduced, this time featuring a wider selection of details. The image of the Puma jumping through the letter “D” remained, but it was placed in a Hexagon border, with the word “Puma” displayed underneath.

In this redesign, the original logo also saw the addition of the full name of the company’s founder. Interestingly, the Puma wordmark in this image would go on to be an inspiration for various forms of the wordmark over the years. 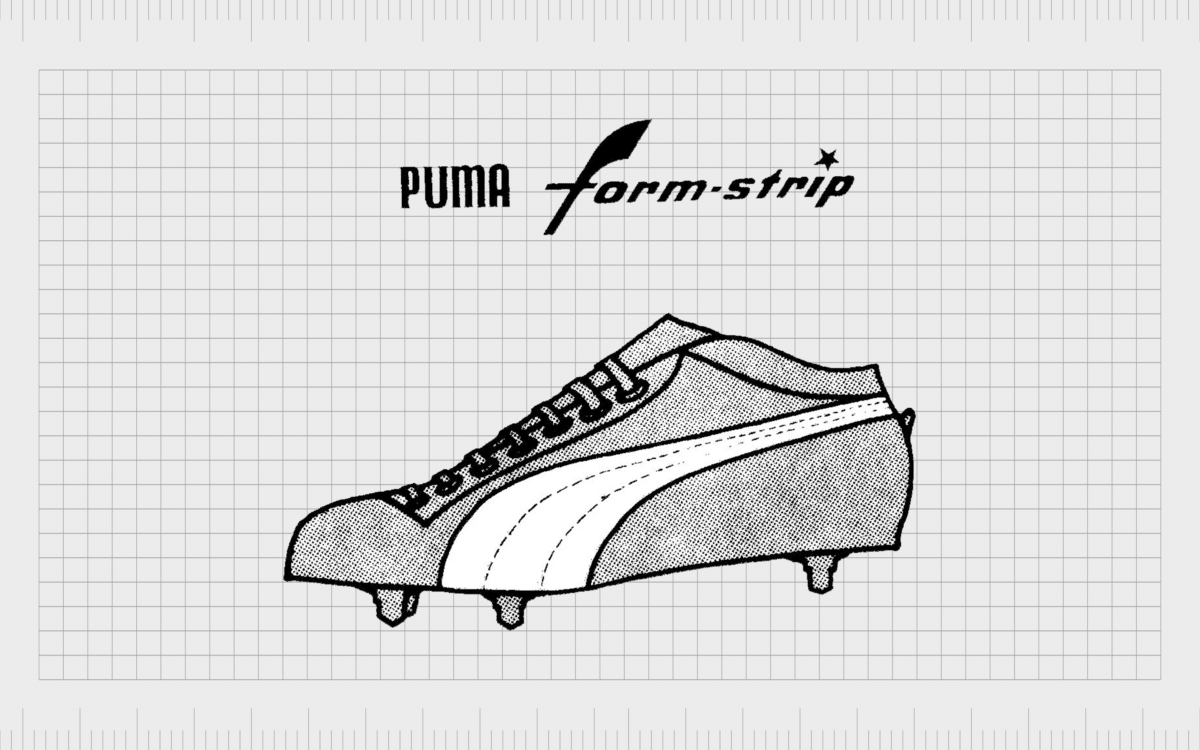 In 1958, the old Puma logo was updated with a focus on a new element of the brand’s identity – the iconic shoes created by the company.

While the Puma symbol was a significant part of what made the Puma company memorable, Puma was also gaining a lot of attention at the time for its pioneering shoes. The brand used a new version of the wordmark “Puma” for its logo, along with a white strip on a sports shoe.

This white strip began to appear on all of the shoes created by the label. 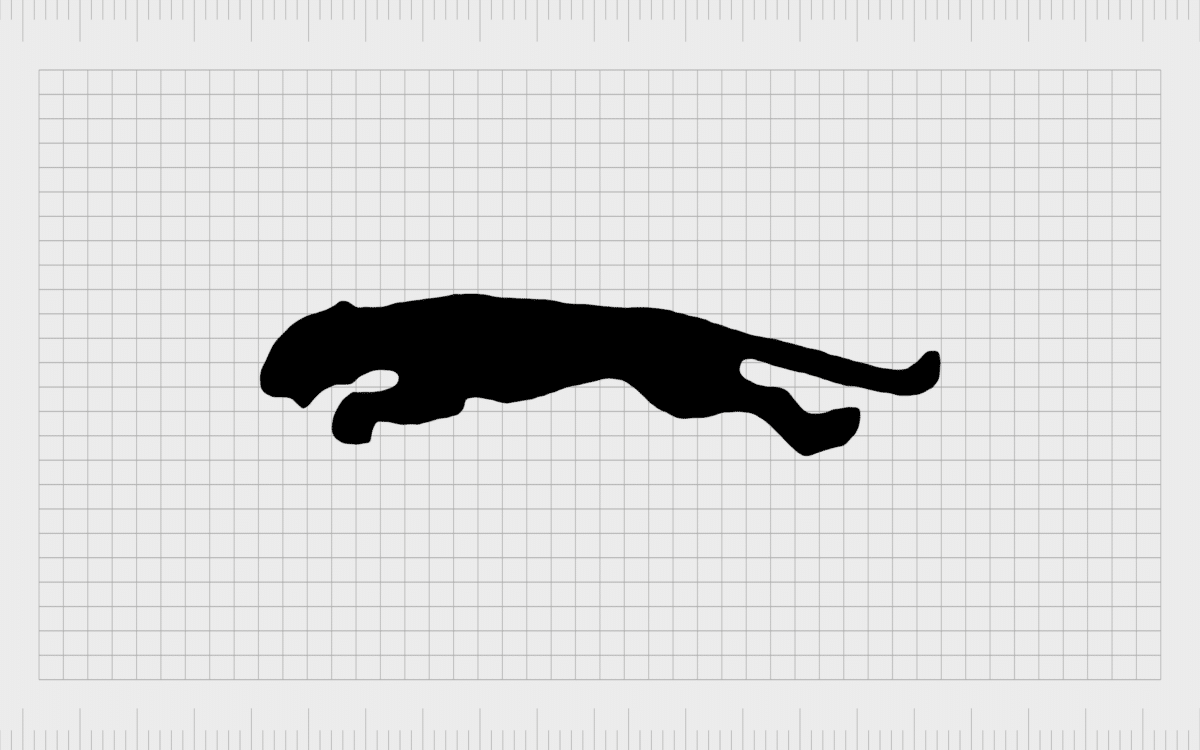 In the late 1960s, the new Puma logo revived the black cat as the central icon of the brand’s visual identity. At this point, the Puma image was the only element of the company’s logo, with no wordmark to accompany it.

This version of the cat design was a lot cleaner and more elegant than previous versions, helping to highlight the sleek and sophisticated nature of the brand. Though the exact image only remained with the brand for a couple of years, it inspired a modification in the 1970s. 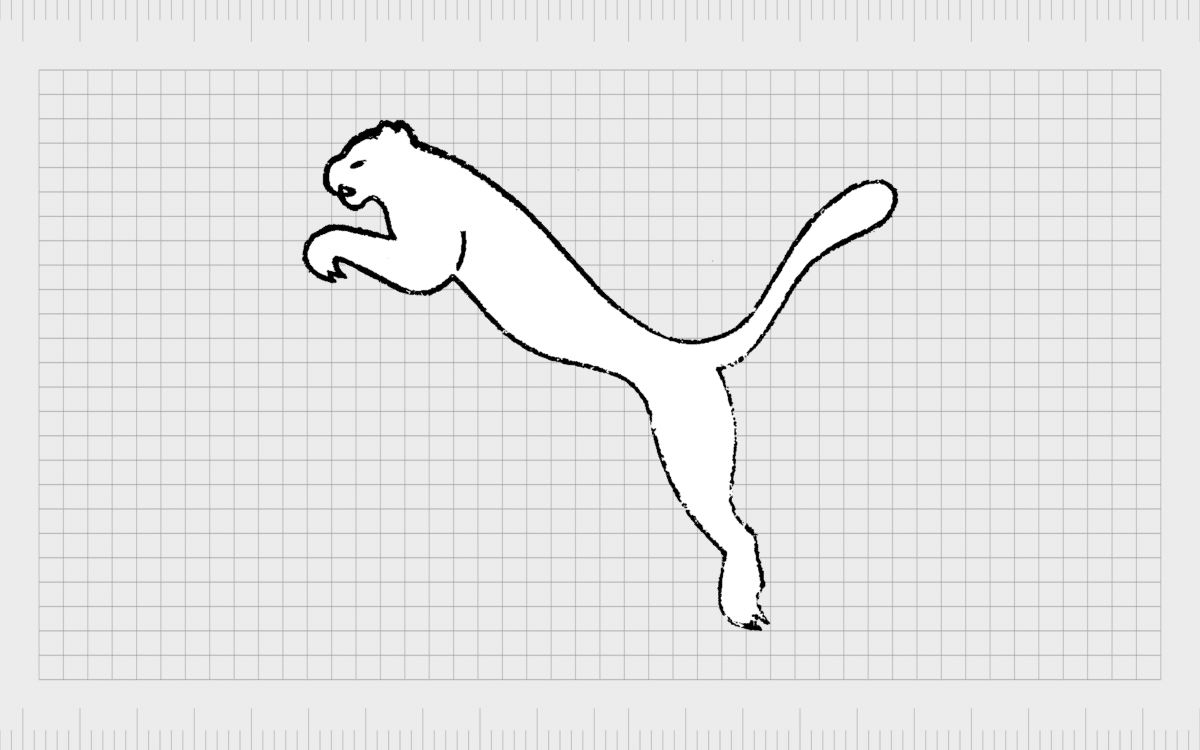 The secondary version of the Puma emblem using the cat as a standalone icon featured the animal as an outline, rather than a bold black shape. The design of the Puma was also changed a little, making it look as though the animal was jumping upwards, rather than running straight forwards. 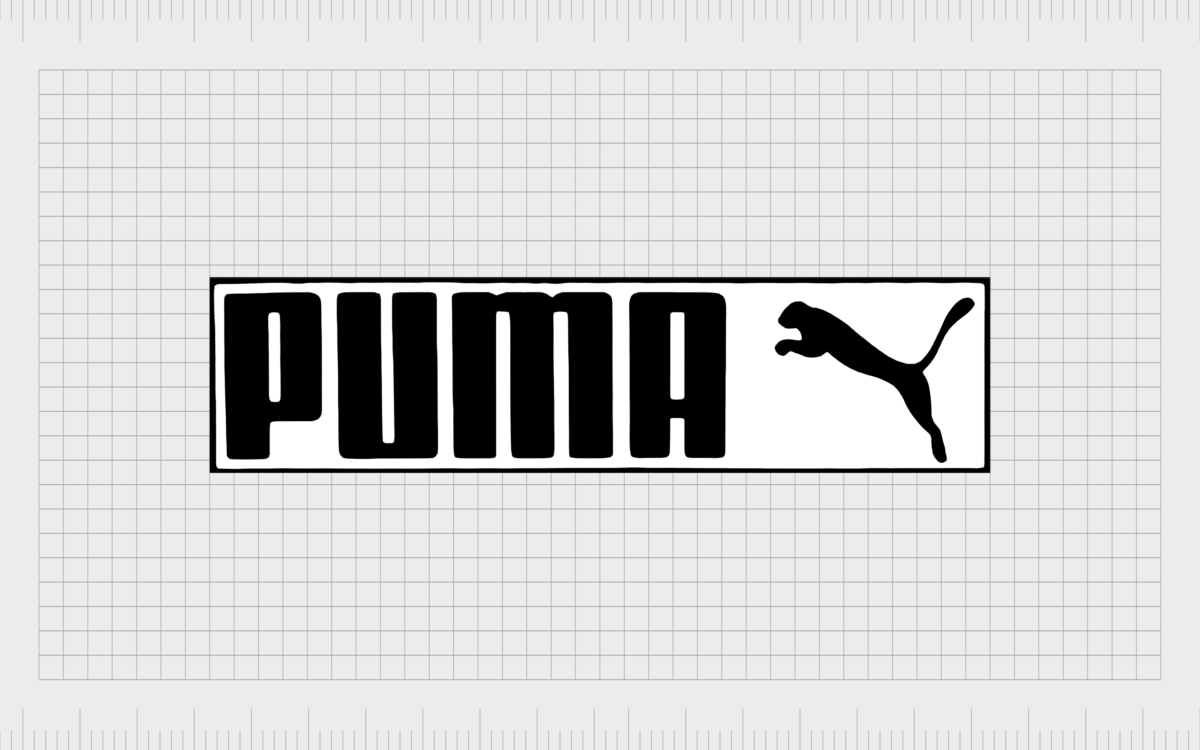 In 1974, Puma changed its logo again, this time filling the outline of the black cat completely, to create a silhouette. The leaping cat was placed alongside a bold, enlarged wordmark for the company’s name, in a custom sans-serif typeface.

This image helped to inspire many following iterations of the Puma brand identity.

While Puma did experiment with various color options during this period, the most commonly remembered version of the Puma logos were in black and white. 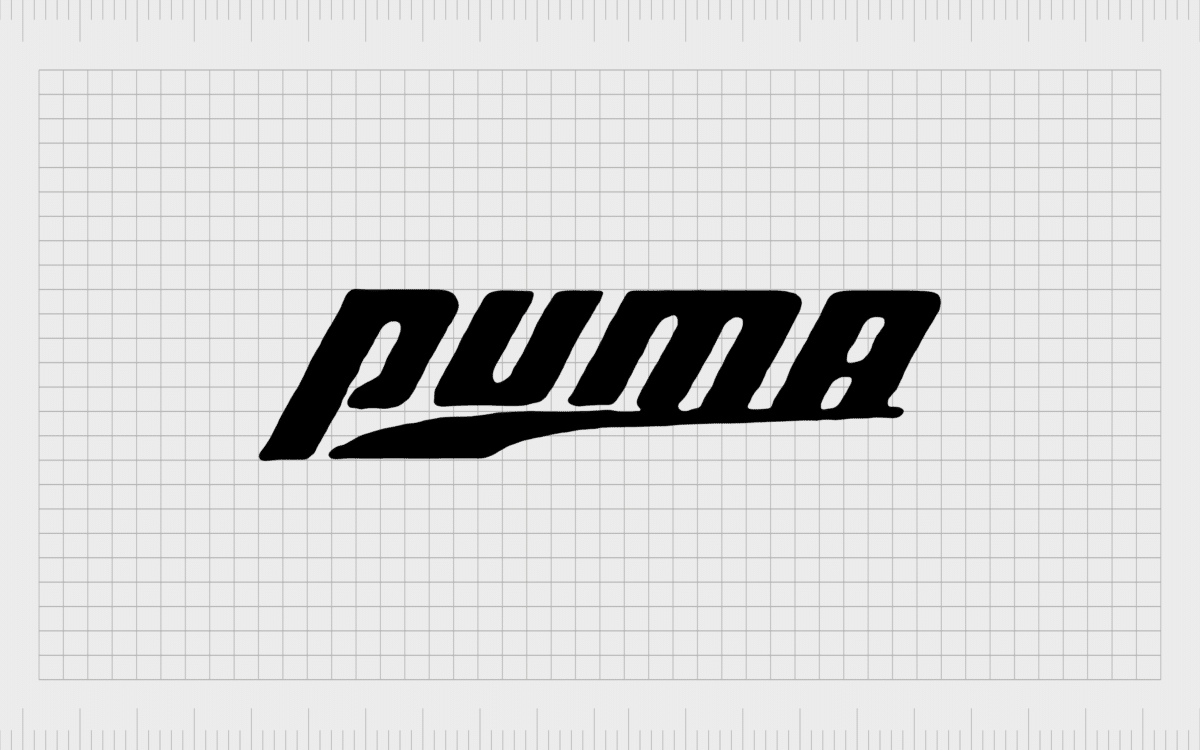 For a brief period in the 1970s, Puma introduced another version of the cat-free Puma logo, focusing on the swooping line often seen on its shoes, and the wordmark for the logo.

The design didn’t stay around for long and was quickly updated with the Puma brand image many people associated with the company for a number of years. 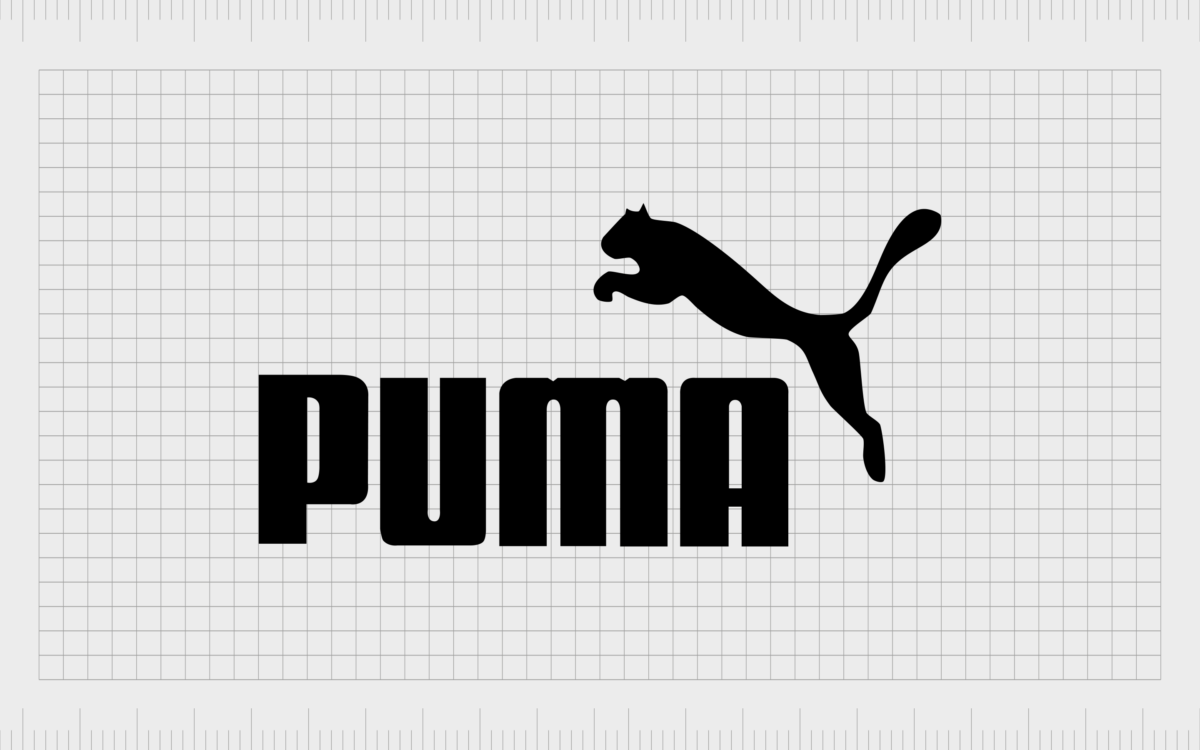 This version of the Puma logo included a Puma leaping over the wordmark for the brand. The logo became the foundation for the image most people associate with Puma to this day. Over the years, the company experimented with using different variations of this logo. 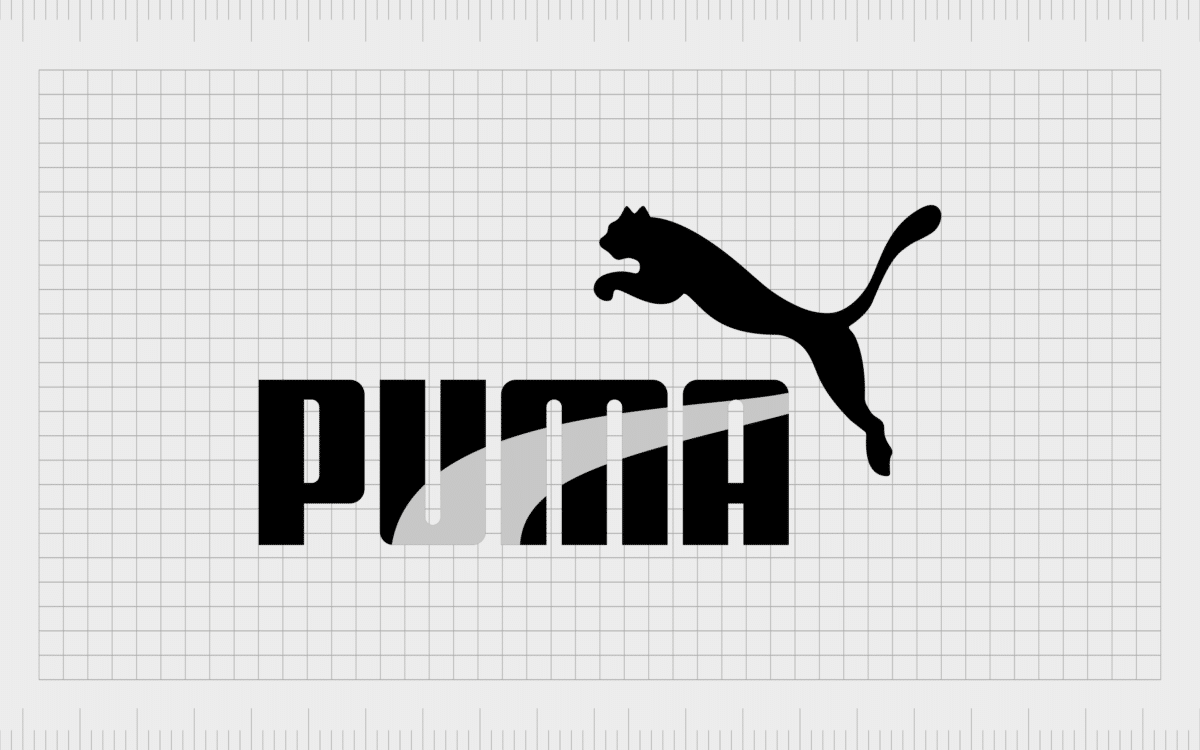 At one point, the brand began using just the animal symbol with no additional wordmark. There are still several pieces of apparel from the Puma brand using this image.

There was also a variation of the logo which attempted to combine the iconic Puma “form strip” with the leaping cat. In this variation, a light gradient was added to the logotype to create the shape of the “form strip”. 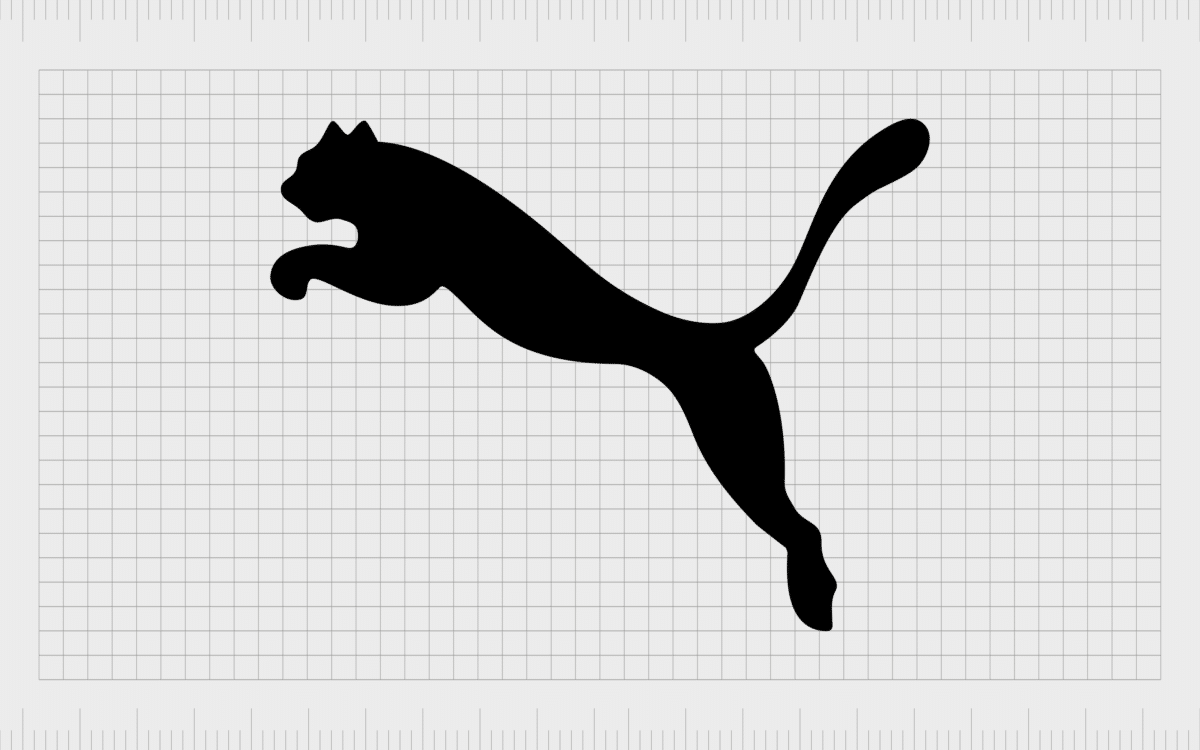 The use of a puma in the Puma logo was an obvious choice for the brand.

Initially, the business was originally established as “Ruda”, but when this title changed to “Puma”, the future of the company’s visual identity was set.

The German company chose the name “Puma” to highlight ideas of strength, agility, and grace often associated with the large cat. Over time, these concepts became infused with the Puma brand identity.

Today, the brand continues to use the logo it introduced in 1988, with a sleek, yet bold wordmark, designed to demonstrate the power of the company. The leaping Puma is the perfect representation of agility and sporting prowess, perfect for a sportswear brand.

What color is the Puma logo?

Over the years, the Puma logo has experimented with color a number of times. Ultimately, however, the official Puma logo color remains to be black.

Some also suggest the Puma logo colors are black and white, but the black image will often appear as a transparent overlay on any color background.

Inverted versions of the Puma logo have appeared on a number of branding components over the years, where the Puma is depicted in white.

The choice of black for the official color of the company makes a lot of sense. Puma wanted a simple and effective image which could work in any format. Black is also the color frequently associated with strength and power.

Puma’s icon is so memorable today it can appear in any shade, and still be instantly recognizable.

What font does the Puma logo use?

Similar to many of the world’s most memorable fonts, Puma’s typography is specially designed for the company. The typeface of the current wordmark only slightly resembles the one used originally by Rudolf Dassler, but it’s clear the inspiration came from here.

Puma’s font is a sans-serif typeface written in all capital letters, with a heavy, bold weight. The solid typeface has rounded edges to help it align with the sleek curves of the Puma animal.

If you’d like to discover a little more about the Puma logo yourself, you can find some resources here:

The Puma logo has become one of the most identifiable and memorable logos of all time for good reason. Over the years, this image has captured the hearts and minds of countless athletic enthusiasts, thanks to its beautiful visual appeal and deeper meaning.

The Puma logo today is an excellent insight into how images for a brand can evolve over time to become more refined and meaningful.

Remember, you can find plenty of additional guidance into other popular logos on Logofile.

Now read these:
—Meet the Adidas and Puma brothers
—The Adidas logo through the years