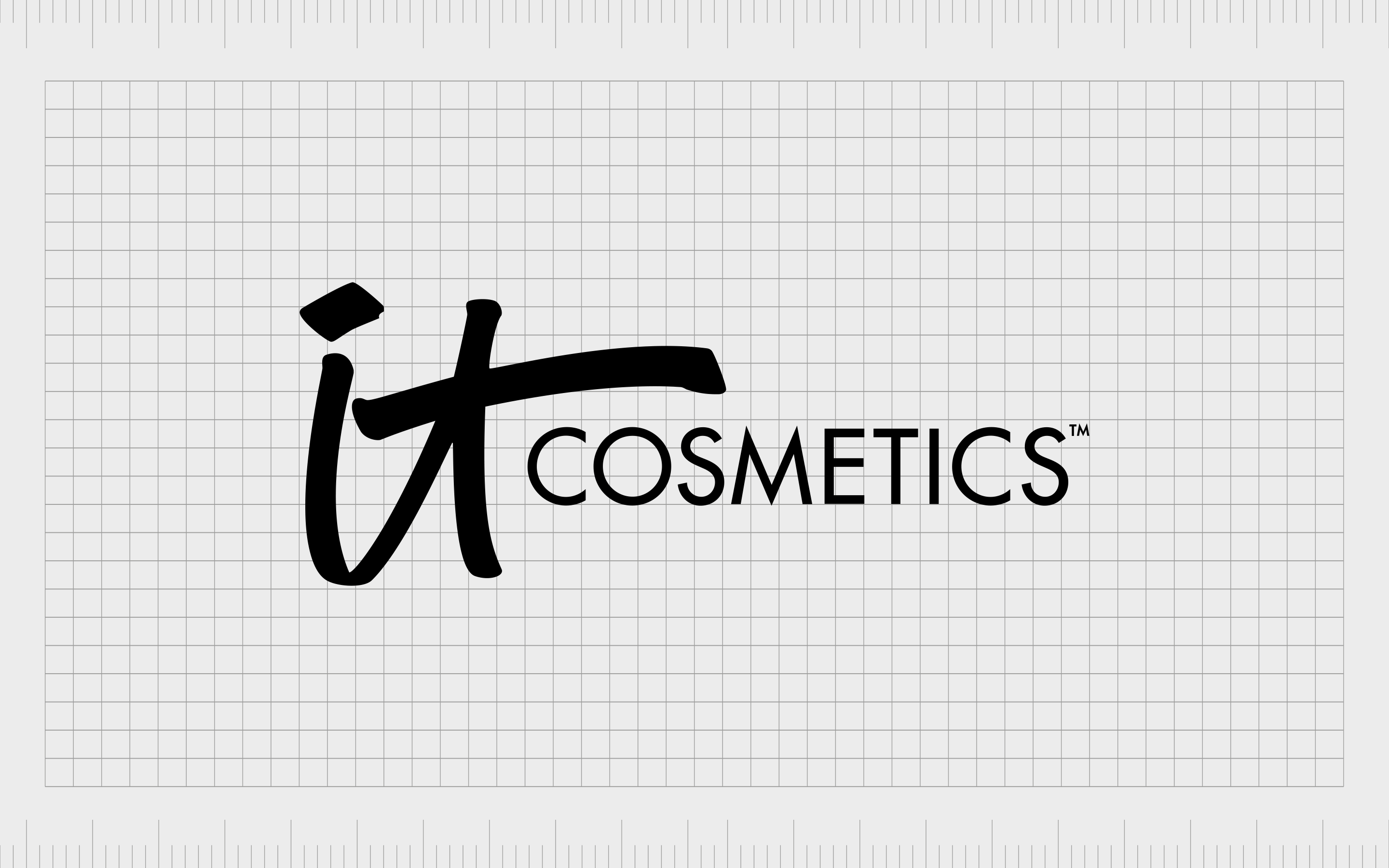 Introducing the IT Cosmetics logo history and brand story

The IT Cosmetics logo has quickly become one of the more recognizable images in the beauty and cosmetics landscape. Designed by the first CEO of a L’Oréal brand in its history, the IT Cosmetics company has taken the world by storm.

With a simple yet modern brand image, the IT Cosmetics organization has carved a place for itself in a highly competitive space. Today, we’re paying homage to this brand’s impact and the incredible woman behind it with a deep dive into the IT Cosmetics logo and its history.

Read on to learn more about how IT Cosmetics first came to be, why it’s such a famous brand today, and what makes the organization’s branding choices so appealing.

IT Cosmetics was created in 2008 by a woman named Jamie Kern Lima. Imagined in a tiny Californian apartment, the cosmetics brand was established as part of Jamie’s desire to create makeup products capable of helping with her own beauty issues.

While working as a TV news anchor, Jamie had been struggling to find good-quality products capable of tackling problems like sparse eyebrows and rosacea, which didn’t crack on set.

Jamie quickly presented her new makeup products on QVC, showing how the cosmetics could fix the problem on her own skin rather than relying on models. She also demonstrated the power of her products on a range of other people, including a 72-year-old woman.

What does IT Cosmetics stand for?

The “IT” part of IT Cosmetics actually stands for “Innovative Technology.” The name was chosen to represent the kind of makeup company Jamie most wanted to build. Kern Lima was focused on designing a problem-solving makeup brand, which quickly took the world by storm.

The founder of IT Cosmetics is one of the most inspirational in the cosmetics industry. Jamie Kern Lima is an American investor, entrepreneur, and media personality, who broke into the cosmetics business following a career as a TV news anchor.

Even before creating her own company, Jamie was highly successful and won several awards for her television work. It was her own issues with makeup on-air that eventually convinced Jamie to design her own makeup brand.

Jamie partnered with dermatologists and plastic surgeons to create problem-solving products for a range of common problems, including hyperpigmentation.

Kern Lima’s products were so successful they eventually led to her selling her company for an impressive $1.2 billion. This sale also led to Jamie’s inclusion on Forbes’ list of America’s richest self-made women.

Jamie held onto the IT Cosmetics brand as its owner for several years before eventually selling the company to L’Oréal in 2016. For $1.2 billion, the sale established Jamie Kern Lima as one of the most successful self-made women in the cosmetics industry.

Because Jamie stayed with the IT Cosmetics brand after the sale, she also earned the title of the first CEO of a L’Oréal brand ever to work for the company.

Who makes IT Cosmetics?

IT Cosmetics is produced by L’Oréal, with direction from Jamie Kern Lima.

Is IT Cosmetics made in the USA?

According to information from QVC, where the IT Cosmetics products were first advertised, these beauty products come from China.

Is IT Cosmetics a high-end brand?

IT Cosmetics is a more luxurious brand than some of the options in the cosmetics industry today, but there are more expensive choices.

The IT Cosmetics logo history and branding

The branding of the IT Cosmetics products and website has mostly stayed the same. Unlike many makeup brands, this company has retained the same logo since its inception, though different color pallets exist for the design.

The IT Cosmetics logo is a simple wordmark with a trademark. The design features the word “cosmetics,” written in sans-serif capital letters. The sleek and slim letters are perfect for creating an air of modernity for the company.

Next to the “cosmetics” section, the “IT” letters are depicted in lowercase, which is unusual when you consider the name of the company is stylized as “IT Cosmetics.” The lowercase “it” looks as though it’s been hand-drawn with a friendly cursive style.

The combination of minimalist typeface and the hand-drawn “IT” working together create an aesthetic that demonstrates accessibility, authenticity, and a sense of authority and trustworthiness.

Some variations of the IT Cosmetics logo on products place the “IT” as a standalone image in a circle, with a border on the outside. The border highlights the fact the product has been developed with plastic surgeons to achieve “clinical results.”

IT Cosmetics logo color and font

Though simple, the IT Cosmetics logo is exceptionally effective. The design includes elements of professionalism, with a modern typeface and the circle seal-style secondary logo. However, the accompanying hand-drawn aspect of the logo helps to stop the image from looking too clinical.

With this design, it seems the IT Cosmetics company wanted to create something approachable and appealing, to showcase its authentic and honest identity. At the same time, they wanted to remind their customers of the work that went into creating an image they could trust.

With simple colors capable of working well on a range of products, and two versatile designs for different digital and offline media, IT Cosmetics has created a highly effective and flexible logo.

Here are some valuable resources if you’re interested in the IT Cosmetics logo:

What Color is the IT Cosmetics logo?

There are variations of the IT Cosmetics logo depicted in other shades, like pink and gold, but these have generally just been for marketing purposes. Many cosmetics companies convert their logos into different colors as part of promotional strategies.

What font does the IT Cosmetics logo use?

The IT Cosmetics logo font is split into two sections, the hand-drawn style element for the “IT,” which was designed specifically for the brand, and a sans-serif typeface.

The company hasn’t officially defined the exact kind of sans-serif type used in the IT Cosmetics logo. However, it’s a straightforward font with a sleek, minimalist design.

Celebrating the IT Cosmetics logo today

While the IT Cosmetics logo might not have gone through as many changes as some of the other prominent makeup company images you may know today, it’s still an excellent example of great branding.

With this logo, the company has been able to create an image capable of conveying authority and authenticity simultaneously.

The IT Cosmetics logo perfectly matches the company’s brand personality, showing a company committed to transparency, truth, and high-quality products.