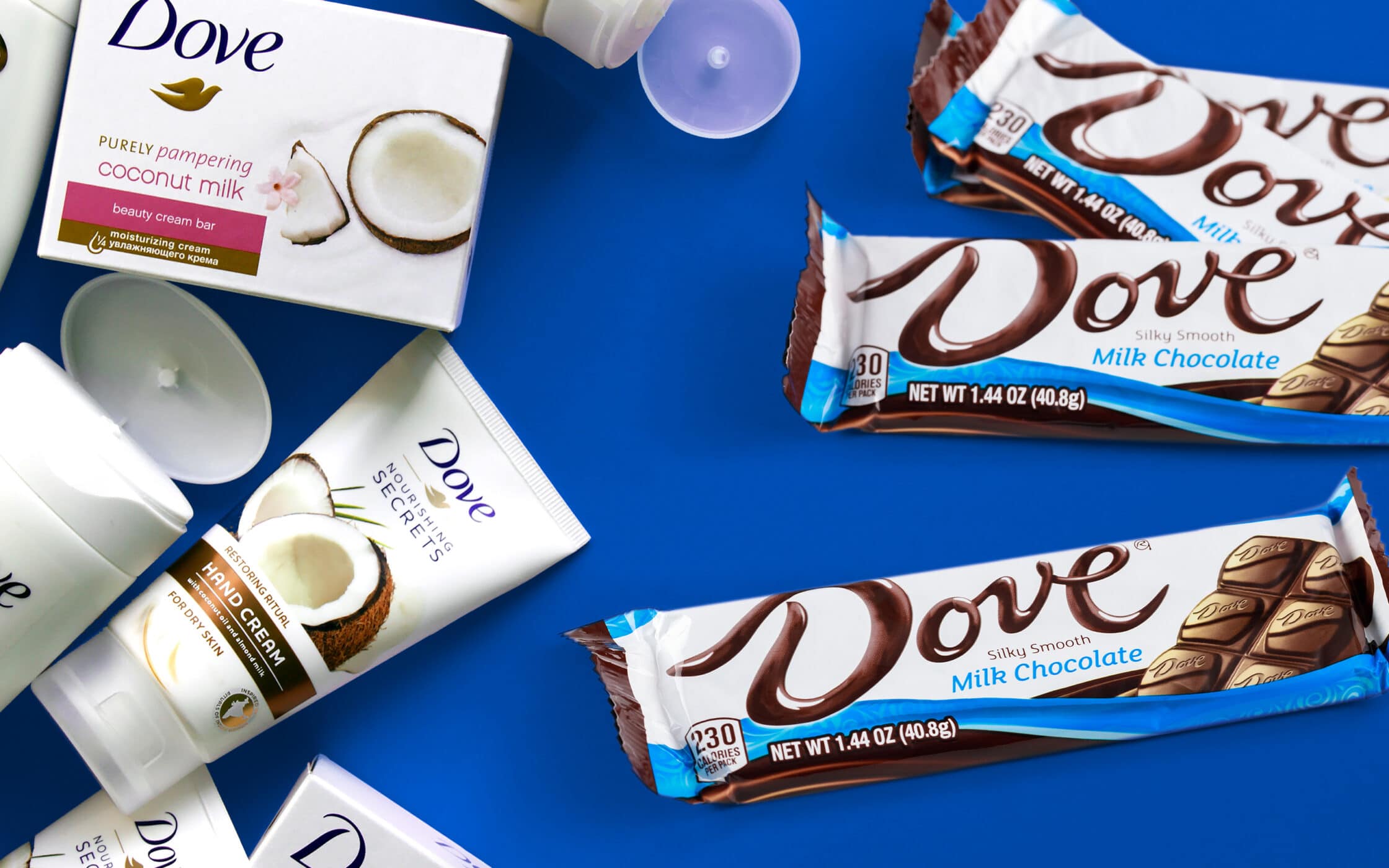 Notably, a company known for selling two vastly different products (like soap and chocolate) isn’t entirely unusual either. Procter and Gamble (P&G) sell a huge range of items, from Head and Shoulders to Oral B toothpaste (albeit not under the same name).

However, the truth is that Dove Chocolate and Dove Soap have nothing in common beyond their name. The chocolate doesn’t belong to the same parent brand as the soap, nor do the brands have any other connection outside of the shared title.

Here’s a closer look at the two “Dove” brands.

Does Dove make chocolate and soap?

Thanks to copyright and trademark laws, it’s rare to see two companies with the same moniker operating in the same country. However, companies can only protect their intellectual property to a certain point.

It is possible to trademark the same name as another brand, as long as you’re not in the same industry, producing competing products.

Dove Chocolate (owned by Mars) produces chocolate and ice cream, products which are a world away from Dove Soap (owned by Unilever), known for creating soap and beauty products.

By law, these two entirely different companies can operate with the exact same name and sell different products.

Though the shared name might not have presented much of an issue for the brands at first, the growing popularity of both brands among a shared audience has likely led to increasing confusion over the years.

Dove chocolate and soap are two entirely different products. The name “Dove” works for both brands due to the associations with the bird of peace and love. A dove is often linked to ideas of romance and love, which can simultaneously connect with the beauty industry, and the confectionary sector.

What is Dove Chocolate?

Originally, the Dove brand focused mostly on ice cream and various other candies. It wasn’t until 1956 when Leo decided to create the brand new “Dove Ice Cream” that the growth of the brand really began in earnest.

The ice cream captured the attention of countless customers and helped “Dove” to grow to a point when it was eventually acquired by Mars.

The name “Dove” was retained for an American audience, while in the UK and other parts of the world, “Dove” became “Galaxy”. Today, Dove Chocolate is one of the most popular chocolate brands in America, available in a host of different cakes, ice creams, and chocolate treats.

What is Dove Soap?

Dove Soap was created by a chemist from America named Vincent Lamberti in 1957. Lamberti created the formula for Dove Soap when working for the Lever brothers in 1949, after interviewing with a range of chemical and drug companies.

Vincent Lamberti wasn’t just the creator of Dove, he was a successful inventor, who held around 118 granted patents over the course of his lifetime. His expertise in organic chemistry made Vincent a powerful part of the Lever Company, where he helped the team to produce a range of great products.

The flagship product of Dove Soap is the Dove soap bar, an item said to help replenish the natural PH balance and moisture of the skin. Dove Soap is an ideal cleanser for people with dry skin, suitable for reinforcing the protective skin barrier.

Over the years, the Dove Soap brand has evolved. It now belongs to the Unilever brand and produces a wide range of beauty and care products, including shower gels, anti-perspirants, shampoos, conditioners, and moisturizing creams.

Dove Chocolate was first produced in 1939, though the company was named “Dove Candies and Ice Cream” for a number of years, before being purchased by the Mars Company. The Dove toiletries brand (Dove Soap) was established officially in 1957.

The creator of the Dove formula, Vincent Lamberti, received the patent for the soap in the 1950s.

Both of these companies are American brands. However, in various parts of the world the “Dove” name is not used for the Mars brand of silky smooth chocolate. The US is the only country which continues to use the Dove name for the chocolate brand today.

Elsewhere, the company is known as “Galaxy”, and Galaxy branding appears on all of the chocolate products.

Though people have often shared theories about why Dove is called Galaxy elsewhere in the world (such as avoiding the connection with Dove Soap), there is no official information provided by the brand to explain the name change.

Why do people think Dove chocolate and soap are related?

The answer to this question is simple enough. Although Dove Chocolate and Dove Soap are two entirely different products, the use of the same name makes things a little confusing.

When you’re producing a popular product in the same market as another product with an identical name, it’s easy to see why people would get confused.

As mentioned above, the name for the brands in the logo designs chosen by each company are quite similar too. Although there are some other major differences between the branding choices which help to differentiate Dove Chocolate and Dove Soap.

For instance, Dove Chocolate uses the central colors of white and brown in their branding, while Dove beauty products are depicted in blue, white, and gold.

Why did Dove Soap choose the same name as Dove Chocolate?

It’s difficult to say why the Dove Soap brand decided to use the same name as an existing company like Dove Chocolate. It’s fair to say coming up with a great name for your company is pretty difficult.

You need to find something which conveys the values and identity of your business perfectly, as well as choosing a name both easy to remember and simple.

Dove is a great name for both a beauty company, wanting to focus on softness, purity and romance, and a chocolate company trying to connect its products with luxury and love. However, perhaps now the companies wish they had chosen different names to avoid the confusion.

On the plus side, the issue of Dove chocolate and soap being connected by customers seems to only be problematic in the United States. Since the US is the only country still using the “Dove” name for the Mars brand of chocolate, this issue isn’t as significant elsewhere in the world.

Is Dove Chocolate the same company as Dove Soap?

Today, Dove Chocolate and Dove Soap are two very successful (and very separate) brands. There haven’t been any conversations (at least not publicly) about bringing the two organizations together, even despite the confusion.

Dove Chocolate continues to be a powerful brand for the Mars Company, producing rich, luxurious treats with a silky smooth flavor. The company is one of the various components of Mars responsible for giving the company a massive $37 billion dollar revenue in 2020.

Dove Soap, on the other hand, continues to grow in popularity around the world, offering an ever-evolving selection of products for hair and body car. As part of the Unilever brand, Dove Soap contributes to a massive $52.44 billion revenue for Unilever, as of 2021.

Both companies have achieved astonishing success, even in spite of their confusing names.

Dove chocolate and soap are not made by the same parent brand. Though both Dove Chocolate and Dove Soap are successful companies in the United States, they operate independently from each other.

If you find the Dove Chocolate and Dove Soap connection confusing, we definitely recommend making sure you choose a unique name for your own brand.