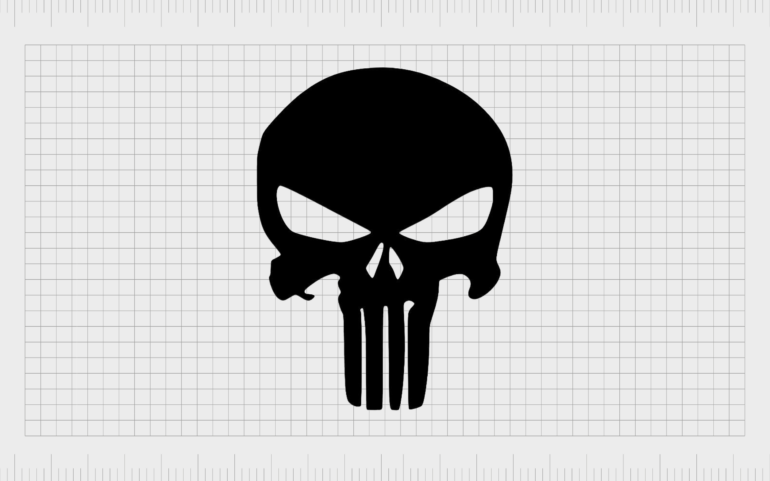 If you know a thing or two about the Marvel Comic Universe, you’re probably familiar with The Punisher logo. One of the boldest and most eye-catching logos in superhero history, this insignia has attracted much attention over the years.

Though somewhat more aggressive than the logos you might expect to see for your average hero, The Punisher logo has become a meaningful icon over the years. It’s popular in the US military and with comic book fans worldwide.

Today, we will look more closely at The Punisher logos over the years, how The Punisher symbol has changed, and what the design really means.

The Punisher logo is a white skull on a black background, chosen to represent the character “Frank Castle” in the Marvel universe. The Punisher was a former US Marine who received numerous awards.

Castle became the “Punisher,” a somewhat aggressive vigilante when he saw his wife and children gunned down after seeing a Mafia hit.

The skull adorning The Punisher’s chest is a reference to his unforgiving nature and an insight into his quest for vengeance and justice.

A number of people created the character, but Gerry Conway, the author of The Amazing Spider-Man, chose the original idea for his unique backstory. Conway also played a part in developing the design of The Punisher logo.

In original sketches for the character, he placed a skull on one breast of Castle’s shirt. Eventually, John Romita Sr., a Marvel art director, used the skull to fill almost all of the character’s chest.

The final sketch was completed by Ross Andru, best known for working on the Amazing Spider-Man comics.

What does The Punisher skull mean?

The Punisher symbol is undoubtedly one of the bolder in the Marvel universe. A skull is something we often associate with death and villainous characters. However, in this case, The Punisher’s skull is intended to be a warning sign to his enemies.

Some sources believe the design was inspired by an emblem worn by a Vietcong sniper. However, others say the skull came from the image of a demon named Olivier in the Marvel Comics Universe.

The violent nature of The Punisher as a character, combined with The Punisher emblem, has led to Frank Castle becoming something of an “antihero” for many readers. Although he fights for justice, The Punisher isn’t opposed to killing his enemies, unlike other characters like Batman.

According to some designers, the bright white skull on The Punisher’s outfit is also intended to lure the enemies’ fire to the chest area on Castle’s armor. This ensures The Punisher can better protect himself against attacks.

At the same time, it’s intended to strike fear into the hearts of criminals. The skull is often the last thing The Punisher’s enemies will see.

When looking at The Punisher logo meaning, it’s also worth highlighting the connection the image has to wars and military forces. According to some sources, Frank Castle often used a picture of a skull to taunt the enemies who captured him in Vietnam.

It’s unsurprising then this image has also been adopted by quite a few organizations, including the US Armed Forces and police.

A spray-painted elongated skull with its four long teeth can often be seen in various locations during wartimes, and it’s also become a common military tattoo. If you watch several documentaries and films about the military, you might have spotted this symbol frequently.

The Punisher logo is a forceful and aggressive image. Unlike the Superman or Batman logo, there are few positive associations with a skull. This means the emblem is more likely to highlight ideas of destruction rather than simply justice.

Unfortunately, the negative connotations of the skull logo have also led to some problematic associations for the groups using the design. The US police are frequently accused of excessive brutality, which makes The Punisher logo a somewhat disturbing choice for those who use it.

Despite this, many police groups have continued to use this image. In 2017, a precinct in Kentucky placed a white skull on its vehicles and quickly began receiving complaints. Some people even believed the police would be more aggressive and kill more people.

However, the police precinct argued the design was to represent the delivery of justice to anyone who breaks the law.

For the most part, The Punisher logo has remained almost entirely consistent over the years, featuring an elongated white skull on a black background. The skull typically featured four long teeth, helping to separate the image from other skull images.

However, at the beginning of 2022, a new logo design was announced for The Punisher. This image began appearing in Daredevil comics soon after. According to the experts, the new Punisher logo was intended to represent a new era for the character and the start of a new mini-series.

This image was introduced following growing controversy around the public’s attitudes toward the police, particularly following the Black Lives Matter movement. The logo was even claimed by the BLM movement at one point to help draw focus to the cause.

The new Punisher logo is similar to the previous version, still depicting a white skull on a black background. However, this image features a set of bold white horns and a pair of tusks on either side of the four white teeth.

The design is apparently intended to represent a mythological demon from Japan known as Oni. According to Japanese stories, Oni was once a villainous creature but has evolved to be seen as a protector to many, warding off bad luck.

The character is an antihero in its own right, making it a good choice for The Punisher’s new emblem.

The Publisher emblem: Components of the logo

Most of the components of The Punisher logo have remained consistent over the years. While the original Punisher logo changed in style a few times, no major changes were implemented to the white skull on the black background.

Unfortunately, the controversies surrounding the logo have often made it difficult to get to the bottom of the symbol’s meaning.

The new Punisher logo aims to recreate the character’s image and draw attention to the critical elements of The Punisher, which set him apart from other antiheroes.

Despite the introduction of the new logo, there’s a good chance we’ll continue to see the original Punisher logo in regions worldwide, particularly in military movements.

What color is The Punisher logo?

The Punisher logo colors have almost always been white and black. However, some design iterations have been made throughout the years, which have colored the eyes red.

We also see a gradient version of the image in certain variations of The Punisher logo, such as the one chosen for the Marvel television series.

This more textured version of the logo uses various shades of grey to give depth to the image.

What font does The Punisher logo use?

The Punisher logo font is only generally depicted on the front of comic books featuring the character and in the Marvel television series. This font is unique to the creation and is quite similar to the “Punishment” font created by Chequered Ink.

The design is gritty and textured, with many worn elements throughout the letters, highlighting the raw nature of the character and his story.

You can find some other helpful Punisher resources here:

The Punisher logo is one of the better-known symbols from the comic book universe and perhaps one of the more meaningful designs we’ve seen bleeding into everyday life. This design, with its connotations of justice and vengeance, has captured the attention of many users.

Today, The Punisher logo has been updated to separate itself from some controversial connections developed over the years. However, the original Punisher image is one we’re not likely to forget any time soon.