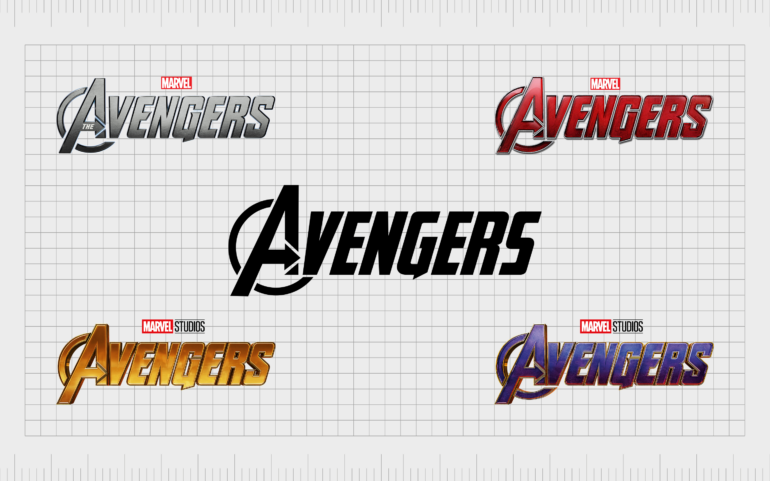 Popular enough to inspire billions in merchandise, endless tattoos, and countless creative works, the Avengers’ logo isn’t just any symbol. This powerful emblem has captured the hearts of comic book fans around the world.

Though many people were familiar with the Avengers symbol long before the rise of the Marvel Cinematic Universe, the series of popular movies and television shows definitely helps.

Today, the Avengers emblem, and the individual logos of each “Avenger” within the team are well-known all around the globe.

Whether you’re a huge fan of the Avengers universe or not, you may be interested in learning how this incredible image came about.

Here’s your guide to the Avengers logo history…

The Avengers logo, otherwise known as the “Big A” logo, was actually designed quite some time ago, by a man named Gasper Saladino. A renowned letterer for the Marvel Company, Saladino introduced the Avengers symbol in 1972, and most of the image has stayed the same since then.

The well-known Avengers logo became the starting point for a crucial symbol, which appeared in a number of movies, graphic novels, and television shows over the years. The “A” from the title, “Avengers” forms the central part of the Avengers’ logo.

The various versions of the Avengers logo we’ve seen over the years are inspired mainly by the movies the symbols were created to accompany, starting in 2012.

The Avengers 2012 logo accompanied the first “Avengers” movie. This image included the standard “A” image most of us know for the Avenger’s today, with the “A” enshrined by a circle, and an arrow in the middle pointing towards the rest of the name.

The lettering is slightly slanted in this Avengers symbol and written in a brushed chrome effect.

One distinctive feature in this logo is the “G”, which has a sharp angle protruding from it. The middle plank of the “E’s” in the wordmark are also sharp-edged. This version of the Avenger’s logo is accompanied by the “Marvel” name, in white on red.

The second, well-known Avengers logo was designed for the “Age of Ultron” movie. The emblem remains more or less the same, but this time the metallic shading is replaced with a bright-red color, similar to the “Marvel” logo colors.

The capital “A” has a reflection added to the top of it, as though the sun is moving away from the image.

2018 delivered Avengers “Infinity War”, one of the biggest movies of all time. To reflect the sheer scope of the film, the developers updated the logo slightly, this time sacrificing a small amount of the ring around the “A” to make the wordmark even sleeker.

The shading also changed from red to a kind of orange-gold, with texture used throughout to make the word look as though it’s shining. Marvel’s logo updated here too, to include the “Studios” mark:

The Avengers: Endgame movie delivered yet another version of the Avengers logo, this time designed in purple, with golden accents. The designers returned the lower part of the circle around the “A” and used texture to make the font seem as though it’s almost in motion.

From the Avengers Endgame logo to the standard Avengers Marvel logo, there have been a number of Avengers symbols over the years. A new Avengers logo hasn’t been introduced for a while – since the Endgame chapter of the series.

Alongside the Avengers emblems highlighted above, there are also a series of additional Avengers symbols with names to go alongside the primary wordmark.

These Avengers logo include:

The large “A” logo is the simplified version of the Avengers emblem, often used to define the movie and the cinematic universe in the absence of the full symbol.

The Iron Man logo can often appear in Avengers properties, as a representation of one of the primary characters from the series. The most common version of the Iron Man logo is simply the mask of the superhero, in white and black:

The Hulk logo, as seen on a number of merchandise items and comic books over the years, is a tightly clenched fist in green, inside of a circle.

Captain America’s shield is one of the most widely recognized Avengers logos among most people – particularly in America. The symbol is simply the shield the character uses in the movies and comics.

Thor’s logo is a simplistic image of Thor’s hammer Mjolnir, inside of a black circle. The image is intended to be simplistic, but powerful.

Black Widow’s logo comes from the comic book version of the character, featuring a red hourglass inside of a black circle, with a yellow circle around it.

Recently updated for the new Disney series, Hawkeye’s logo features an arrowhead in purple on a black circular background, with a purple circle outline.

What color is the Avengers logo?

The flexibility of the Avengers logo means there are multiple Avengers logo colors associated with the brand. The color scheme is usually presented either in basic black and white, or with a variety of shades and gradients to reflect the movie or creative property in question.

Typically, the designers use colors within the Avengers logo to reflect the storyline of the movie they want to advertise. For instance, in Avengers Endgame, the choice of purple was used to represent the primary antagonist of the film – Thanos.

The texturing used for the logo was also changed, to look as though the word was almost turning to ash.

Alternatively, the movie poster for the 2012 film fit perfectly with the sky and buildings of the major fight the Avengers were engaged in.

What font does the Avengers logo use?

The Avengers logo font is perhaps the element of the brand’s image which has remained the most consistent over the years. The font is completely unique to the brand and designed by Marvel’s own typography expert.

The “A” of the Avenger’s name is probably the most eye-catching part of this font, with its circle outline and an arrow connecting the horizontal bar in the center. The name of the movie series is also written in uppercase, inclining slightly to the right, as though moving forward.

There are various notches and sharp points throughout the name “Avengers” to help highlight the fact this is an action series, and a group of super heroes.

You can check out some great Avengers logo resources here:

Today, the Avengers logo is a massive icon in the comic book world, and something many people have fallen in love with over the years.

The Avengers logo has helped to revitalize a deep interest in the Marvel Comics brand and pull new fans towards the Marvel Cinematic Universe.