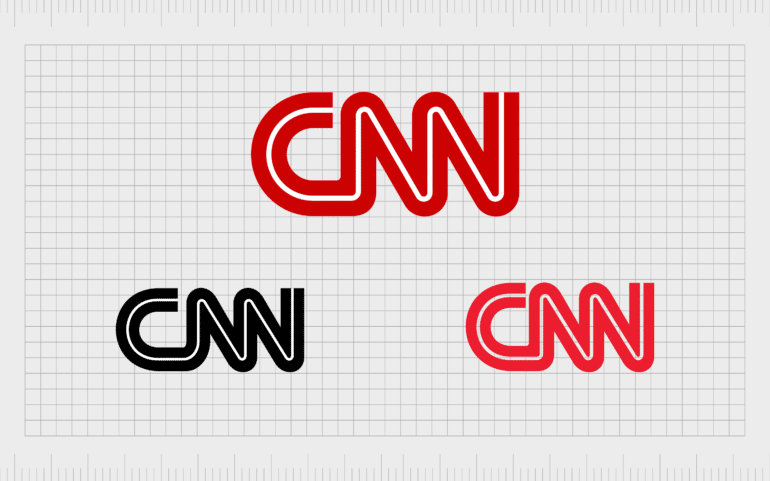 How much do you know about CNN logo? The CNN news logo has rapidly made its way around the world, as one of the most recognizable symbols in the television landscape. The CNN logo also has a very interesting history – one most people don’t know.

The Cable News Network (CNN) may feel to some like it’s been around for a lifetime, but it actually only launched in 1980.

Despite this, the CNN symbol international logo now appears in various locations all over the globe, as CNN excels as one of the world’s top English language TV networks.

Today, we’re going to be looking at the history and meaning.

Who owns CNN? An introduction to CNN

Before we dive into an exploration of one of the best-known logos in history, let’s start by taking a look at some facts about CNN.

The Cable News Network is a multinational television channel, focused on the delivery of breaking news. CNN launched in 1980, more than 41 years ago, and runs from the CNN Center in Atlanta, Georgia.

When launched in 1980- by Reese Schonfeld and Ted Turner, CNN was intended to be a 24-hour cable news channel, offering constant coverage.

CNN was actually the first television channel to deliver 24-hour news coverage, and it was also the first all-news channel for the United States. As of 2021, CNN ranked third in viewership among cable news networks, behind MSNBC, and Fox News.

CNN is best-known today for dramatic coverage of breaking news, though the channel has occasionally drawn criticism for being “overly sensationalistic”.

The original logo for the CNN news channel was designed in 1980 by Anthony Guy Bost, a professor for the University of Auburn.

Communication Trends, an Atlanta-based company which worked with CNN before the channel “officially” got off the ground, presented the logos to the leaders of the company, offering a range of variations, some of which the company liked more than others.

According to VP of Turner Broadcasting, Terry McGuirk, who was involved with the development of the news channel in the early years, said he was one of the first to see the logo presentation. While there were four or five different looks to choose from, one stood out.

The CNN founder Ted Turner and Terry McGuirk both liked the idea of a monogram with a line through the letters, which seemed similar to a cable connecting the characters.

From 1980 to 1984, CNN used the same simplistic black and white logo, featuring the iconic cabling through the middle.

The design seemed to be perfect for the network, with the letters connecting together almost like the blips on a heart-rate monitor – demonstrating the channel’s ability to keep their finger on the pulse of world news.

The initial logo for CNN has remained almost exactly the same over the course of history. This is particularly impressive when we consider just how affordable the design was. According to experts, the final bill for the design was somewhere between $2,400 and $2,800.

During 1984, CNN updated its logo only very slightly. While the iconic design itself remained untouched, the color palette updated to scarlet red and white. The logotype of the television channel here seemed far more powerful, passionate, and memorable.

The decision to switch to red and white as a color scheme helped the CNN emblem to stand out from the crowd and strengthened its connection with the “heart monitor” style design. Red is frequently associated with things like life and passion.

The second update to the CNN logo happened in 2014. Once again, it was a tiny change in CNN logo history – one most people would probably overlook. The red and white combination, and the overall design of the CNN symbol remained mostly the same.

The only difference here was the shading of the red, which became slightly darker – closer to a kind of burgundy. This new touch gave the logo greater depth and added a sense of professionalism to the overall image for the broadcaster.

Notably, while the primary CNN logo has stayed mostly the same over the years, with just a few basic color changes, there have been some other variations of the logo from time to time.

For instance, the company released a “CNN Money” logo, with a serif font for the word “Money” placed in white next to the official CNN symbol.

The CNN logo is simply a monogram of the letters used in the company’s name. The design is created to look more like a consistent shape than a wordmark. The uninterrupted strip curves and moves to form the shape of a “C” and two “N’s”.

However, the two “N’s” are more closely connected, sharing a single element in the middle.

According to the CNN leaders present at the logo choosing meeting in the 1980s, the decision to use this logo was based on the presence of a wire running through the letters. The “cable” style seemed perfect for a company called the Cable News Network.

Notably, the logo has received some criticism over the years, despite its popularity. The Canadian National Railway raised some concerns saying the image looked too similar to its own logo.

Despite this controversy, and the fact the logo only took around 48 hours to create, the design has remained consistent for more than 40 years.

The design of the CNN logo has remained almost exactly the same since it was first introduced more than 40 years ago. Despite only taking a short time to create, the CNN logo quickly captured the hearts and minds of the leaders behind the CNN brand.

Today, the shape of the CNN logo, and its distinctive font is one of the most memorable images in history. Though the coloring has changed over the years, it hasn’t detracted from the memorability of the CNN symbol.

What color is the CNN logo?

According to experts, the coloring of the CNN logo today is “Boston University Red”. This sharp and eye-catching color red is perfect for conveying ideas of professionalism, life and passion.

What font does the CNN logo use?

The CNN logo font isn’t a pre-existing typeface, but a unique creation designed specifically for the CNN company when it was first launching. The CNN logo is an uninterrupted strip or line which bends and curves to form the acronym of the company.

The simplistic image is perfect for demonstrating the channel’s unfaltering focus on delivering consistent news and updates around the world.

The signature font for CNN was officially created and designed by Anthony Guy Bost, who is said to have created the image in less than 48 hours.

The CNN logo has emerged as one of the best-known logos in all of television history. While it only took a couple of days for someone to come up with this amazing design, it has remained a consistently important part of the company’s visual identity.

Indeed, unlike most brands, CNN has only made slight changes to its logo over the years, with a focus on updating coloring, rather than changing the image of the brand entirely.

If you’d like to learn more about iconic symbols like the CNN news logo, you can find more excellent guides on Logofile, from Brand Fabrik.