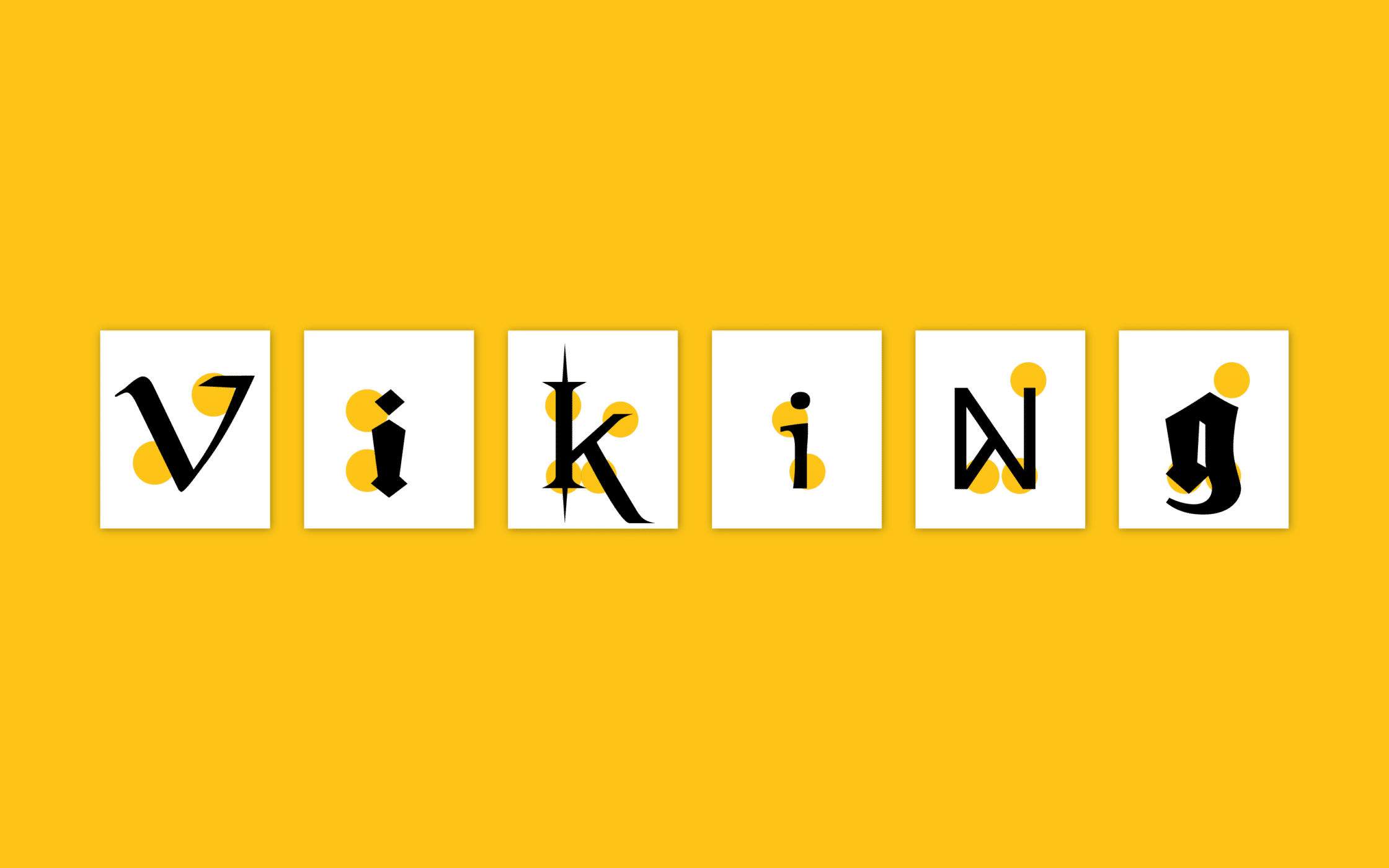 Your guide to the most-fierce Viking font options!

The following Viking font options are becoming a popular typographic choice among creators keen to bring a sense of mystery and strength to a project. These Norse fonts are often distinguished by their sharp angles, and almost rune-like shape.

Viking typography carries a kind of magic, and an exotic design capable of clearly separating any brand from the pack.

Today, we’re going to be celebrating Viking style fonts with an exploration of some of the most popular options available. These Norse font choices were chosen for their distinctive style, legibility, and versatility.

12 Viking font choices for any project

Most Viking style fonts combine Scandinavian simplicity, with Nordic history. You can find Viking lettering which seems to come straight from the old runes and languages the country used decades ago.

There are Norse lettering options that seem a little more modern too, perhaps designed for the digital age, thanks to their excellent clarity.

A Viking rune font or typeface will usually be described as a “decorative” type. This makes Viking lettering a good choice for things like logos, headlines, and other creative projects. You might also experiment with Norse fonts on social media posts and channels.

One of the most popular Viking font options available right now, Mjolnir is a kind of Nordic rune font, equipped with a number of unique embellishments and flourishes.

If you’re looking for Viking typography which instantly draws the eye, Mjolnir’s compelling shapes are sure to make an impact. This typeface is almost tribal in style, and it’s perfect for use in headlines, logos, titles, and alongside other geometric type.

Thanks to its highly creative design, Mjolnir will work best in larger display sizes. The flourishes may get lost in smaller sizes.

Another excellent example of a Nordic rune font, Jotunheim was inspired by the traditional Norse lettering of centuries passed. This Viking font family is extremely eye-catching, and once again works best in larger sizes, due to the flourishes in the Norse lettering.

There are 3 different versions of Jotunheim available, and you can mix them up to combine more legible and creative characters. You’ll also have access to a range of uppercase multilingual letters, simple punctuation, and numbers.

This is definitely a Viking font ready to work well with other more simplistic typefaces.

Somewhat more simplistic than some of the other Viking fonts in this list, the Nordin typeface combines a highly legible design with a rustic vibe. This Nordic font looks fantastic when combined with other modern and sans serif fonts in a creative project.

You could use it for book titles, headings, or logos, depending on your needs.

Nordin doesn’t rely on the same flourishes and rune styles as other Viking typefaces, but it has a distinctly strong and distinguished air to it. We think it would be a great choice for a brand tailored towards outdoorsy and adventurous customers.

A beautiful decorative font, the Noatun typeface is strong and mysterious, with a runic style to it. This Viking typography instantly draws the mind to visions of ships sailing across icy, mist-covered seas.

One of the more popular and recent Norse fonts on the market, it works well in a variety of styles.

There’s a web font version of this product available so you can ensure it looks good in digital environments. Noatun is also equipped with a unique geometric style which helps it to line up perfectly with other typefaces.

Multilingual support, numbers, uppercase letters and punctuation are all included in the kit.

There are two sets to choose from.

The first alphabet set has rough edges around the uppercase letters, to mimic the look of stone or wood being worn down. There’s also a second set with sharper edges on the lowercase keys.

Combined, you can create a fantastic finished look.

Connected to ancient druids and runes, Stonehenge is a Viking font with instant aesthetic appeal. This font doesn’t have as much depth or flourish as some of the other Norse fonts we’ve covered, but it’s still distinctly Scandinavian in style.

Created by Comicraft Design, Stonehenge is a beautifully eye-catching font with elements of mystery, strength, and an almost fairytale air. This typeface would work well as a header or title for a book. It’s also a fantastic choice for logos and short quotes on social media.

Along with standard letters, you’ll also get access to a range of rune-like embellishments.

Described as a vintage label font, Asgaard is an excellent example of compelling Viking typography. The sharp edges and bold text immediately grab attention, reminding us of the titles of rock and roll albums.

Perfect for companies who want to demonstrate strength and confidence, Asgaard is a layered label font with multiple available characters to choose from.

This Norse font comes in a range of styles and textures, including a 3D-style effect which might be ideal for packaging and signage. Though quite an artistic design, the display typography also comes with versions easier to read on smaller screens.

Another Viking font which should work well in a range of sizes and environments, the Connemara Old Style font is a bold choice for branding. This typeface is almost a kind of serif, with its sharp feet around the upper and lowercase characters.

There’s a bold version available which would be ideal for titles, headings, or logos. You can also explore the “lighter” version of the font, which supports much slimmer characters. This Norse font instantly reminds us of Viking ships.

Another excellent example of a Norse font which could also be described as a Viking rune font, the Angars Runes typography looks amazing in a range of settings.

Beautifully historical and Scandinavian in style, this type was made to honor the Middle Age style of stone engravings. Designed with gothic curves and sharp edges, it’s a great Viking font.

Aside from exploring a variety of different letters and characters with Angars Runes, users will also have access to a variety of embellishments, numerals, alternative letters, and decorative separators.

This product comes with multilingual support too.

Designed by Swedish font master, Lutz Baar, Linotype Nordica is a Norse font with a beautiful Scandinavian twist. The tall and rough letters help this Viking font to appear more authentic, as though it’s been carved into stone or wood.

The narrowness of the letters also makes this product a good choice for small spaces and packaging.

Linotype Nordica is ideal for headlines and titles when you want to give a more rustic and mythological vibe to a brand. The simplicity of the typeface also means it’s ideal for all kinds of smaller projects too.

Runestone Regular is a Viking font that appears as though it’s been scratched onto wood with a piece of old chalk or stone. The raw edges and roughness of this typeface make it a perfect choice for a company keen to show a connection with the natural world.

Like many Norse fonts, this typeface is very angular, with a lot of sharp edges and triangles.

Depending on the weight you choose for the Runestone Regular Viking typography, you could create some excellent signage, book titles, or logos. The typeface is also a good pick for headers and quotes on social media in small doses.

If you’re looking for a more simplistic font with just a hint of Viking atmosphere, Viking Gothic could be the ideal choice. This Norse font looks remarkably similar to a standard sans serif typeface.

The slightly taller figures and sharper edges give it a look combining gothic and Nordic style.

Viking Gothic won’t immediately showcase Viking vibes as quickly as some of the other typefaces discussed here. However, it could be the perfect accompaniment to one of the other, more decorative fonts above.

We’d recommend using this in combination with another font when you’re looking for better legibility.

Have you found the perfect Viking style font?

Viking style fonts and lettering can bring a sense of authenticity to your design project. They’re perfect for adding a distinctive feel to your layout and identity work, and are highly memorable.

Although they won’t work in every situation, Viking fonts and typography can really transform traditional layout, website and social media design.

Don’t forget to check out our lists of other fonts for more inspiration!