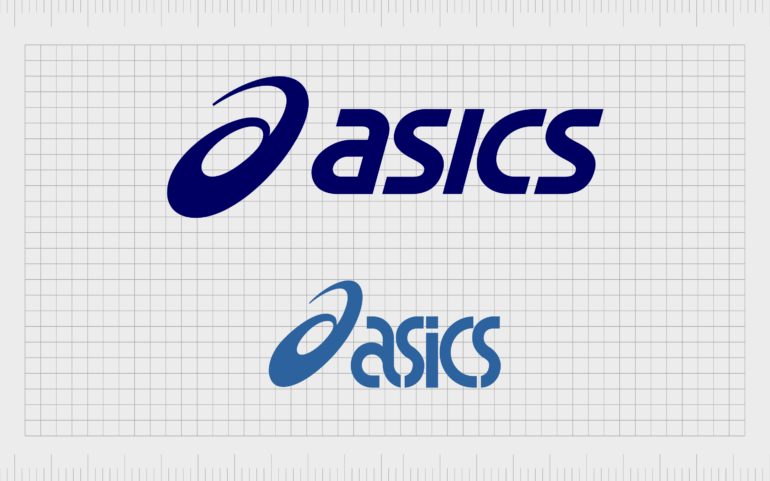 How much do you know about ASICS logo history? The ASICS shoe logo is one of the better-known images in the athletics landscape, often ranked alongside a host of leading footwear and sporting companies, like Adidas and Puma.

Since the ASICS company first launched in 1949, the accompany branding hasn’t seen many changes. The Japanese multinational corporation has maintained a very consistent visual identity over the years, which may be part of the reason why the company is so memorable.

The ASICS logo is commonly associated with comfort, excellence, and performance. Today, we’re going to be looking at the background of the popular ASICS logo, where the design originally came from, and how it has changed through the years.

Who founded ASICS and where was ASICS founded?

Before we explore the various components of the ASICS logo, let’s start with a simple question: where did ASICS originate?

The Japanese company was first launched as Onitsuka Co LTD on the first of September 1949.

The founder of the organisation, Kihachiro Onitsuka started by making basketball shoes in Kobe, Hyogo Prefecture in Japan.

Over the years, Onitsuka expanded from basketball, focusing on a wider range of sports for Olympic-level athletes. The company became particularly popular for the Mexico 66 design, which included a set of crossed stripes, now synonymous with the shoes produced by the brand.

Bruce Lee was one of the first celebrities to popularize the design.

Onitsuka eventually merged with JELENIK, and GTO to form the new “ASICS Corporation” in 1977. The name is an acronym for the phrase “anima sana in corpore sano”, which means “A sound mind, in a sound body”.

What year was ASICS founded?

The company which eventually gave birth to the ASICS brand, Onitsuka Co LTD, was first founded in 1949. However, the official ASICS brand name first appeared in 1977, after Onitsuka merged with two other companies to create a new athletics brand.

ASICS started life in Japan, but now sells shoes all over the globe.

The ASICS brand is a public company, managed by chairman Kiyomi Wada

Where are ASICS made?

Many ASICS shoes are made in Chinese factories and shipped to customers across the globe. ASICS also has various production facilities in Cambodia, Indonesia, Sri Lank, Turkey, and Vietnam.

What was the first ASICS shoe?

The first ASICS shoe was technically the “OK” Basketball shoe, designed by the Onitsuka Corporation in 1953.

At the time, basketball shoes were notoriously difficult to make, as designers were required to focus heavily on the comfort of the shoe, as well as ensuring the material had enough durability to withstand jumping.

Onitsuka gave early prototypes of his shoe to basketball leagues in his home of Kobe for wear testing, so he could gradually improve the quality of the design.

The first ASICS shoe to feature the iconic “Tiger Stripes” design common within ASICS footwear today didn’t appear until 1968, during the Olympic games. The design remained with the company since, and continues to be one of the most significant differentiating factors for the brand.

ASICS shoes are widely regarded as comfortable, and high-quality shoes. Over the years, the ASICS company has introduced a number of unique and pioneering design changes to their shoes, from a split tongue design for balance, to a gel sole for greater comfort.

The company is highly committed to producing some of the most resilient, durable, and reliable shoes in the sporting industry. This brand often competes with the likes of New Balance, Adidas, Nike, and many other well-known companies.

What is the ASICS slogan?

There have been a handful of ASICS slogans over the years, often based on the Latin phrase inspiring the company’s name. Taglines include “A sound mind is a sound body”, and “Running makes you a better sprinter”. One of the better-known slogans is simply “Keep running”.

Now we’ve covered ASICS company history, let’s take a deep dive into the visual side of the ASICS brand. As mentioned above, there have only been a couple of ASICS logos throughout the years. For the most part, the company has maintained a consistent brand image.

In fact, the first version of the ASICS logo is in the same color palette as the ASICS symbol we know today. The image also featured the swirling design seen at the front of the ASICS wordmark.

The ASICS logo is based on the name of the company, which comes from the philosophy of having a sound mind in a healthy body. This unique driving slogan has led to the creation of a logo all about balance and serenity, rather than speed and power, like some shoe logos.

The iconic ASICS logo introduced in 1977 was the basis for the symbol we know today. This design was created by Herb Lubalin to represent the swirling path of a running track in the Olympics, or a spinning disc thrown into the distance.

The design is intended to convey movement and motion, as well as the ambition, growth, and progress of a person engaged in sports. The color blue, which continues to appear in the ASICS logo today, conveys a sense of reliability and stability.

The sans-serif typeface is an interesting choice by the brand. The lowercase “A” in the design seems to make the company seem more approachable and appealing. A lowercase design is also somewhat more reassuring and elegant than an uppercase alternative.

The ASICS brand made its one and only change to the logo design in 2003. This design update simply refined the existing elements of the logo, shifting to a darker, more professional shade of blue, and a tighter swirl emblem. The biggest change between the two designs is the typeface.

The lettering is a bolder, more modern sans-serif typeface, angled slightly towards the right, to indicate forward motion and growth. The slight angling of the font in this logo helps to further enhance the principle of movement in the design.

The company has still used the lowercase “A” in its most recent logo, to preserve the accessible appeal of the overall brand image.

Elements of the ASICS symbol: Color and font

The ASICS logo is a simple but effective emblem, perfect for conveying modernity, balance, and progress. The clear sense of motion and movement in the design is perfect for appealing to an audience of up-and-coming athletes.

Though the design of the ASICS logo hasn’t changed much over the years, it has managed to maintain an excellent appeal for its target audience. Notably, the logo is often combined with the “Tiger stripes” design on the ASICS shoes to create a full brand image.

What font does the ASICS logo use?

Perhaps the most significant part of the ASICS symbol is the ASICS logo font. This typeface is unique to the athletic company, and designed specifically for the brand. The design features a lowercase “A” at the beginning of the word, while the rest of the letters seem to be capitals.

However, the letters are all the same size.

The use of the lowercase “A” may be to reflect a similar shape to the emblem on the left-hand side of the ASICS wordmark. The typeface is bold, modern, and friendly, similar in style to Constellation Bold Italic or Regeneration Italic.

What color is the ASICS logo?

The ASICS logo colors have always come from the blue color palette, intended to represent professionalism, and credibility. The most recent version of the ASICS logo color is a lot darker than its previous design.

Although there may not have been many designs to cover in ASICS’ logo history, the company has certainly made the right impact with the images it has chosen. The ASICS logo is simple and powerful, excellent for conveying a sense of movement and progress.

This inspiring and engaging logo also helps to highlight the credibility of the brand, through a color most people associate with reliability and professionalism.